Objectives: To investigate the utility of quantitative lung perfusion scintigraphy and pulmonary function tests in the assessment of radiation-induced lung injury.

Method: The prospective study was conducted at Zonguldak Bulent Ecevit University Hospital, Turkey, from May 2012 to October 2016, and comprised female breast cancer patients having undergone lung perfusion scintigraphy with Tc-99m macroaggregated albumin before and after radiotherapy. Pulmonary function tests and carbon monoxide diffusing capacity tests were also carried out on all the patients, and the relationship between treatment-related changes and its association with radiotherapy doses was analysed. Data was analysed using SPSS 19.

Results: There were 43 patients with a median age of 49 (interquartile range: 32-71 years). Carbon monoxide diffusing capacity values at baseline showed a significant decrease at 6 and 12 months post- radiotherapy (p<0.05), while none of the parameters of the pulmonary function tests showed a significant difference (p>0.05). Also, the median percentage of perfusion studies in the irradiated lung decreased significantly (p<0.001) at 12 months post-treatment. There was significant reduction in perfusion studies of irradiated lungs (p<0.05).

Conclusion: Carbon monoxide diffusing capacity and quantitative lung perfusion scintigraphy were found to be useful tools for the early diagnosis and monitoring of radiation-induced lung injury.

Radiotherapy (RT) is commonly used to treat breast cancer patients because it reduces the risk of loco-regional recurrence and improves survival.1,2 Radiation-induced pulmonary injury (RIPI) is a relatively common complication of RT for thoracic malignancies. Radiation pneumonitis is one of the acute manifestations of RIPI, and usually occurs 1-3 months post-RT. Symptomatic pneumonitis may occur in up to 50% patients in lungs, and in 5% breast cancer patients.3 Chronic lung damage develops over a period of 6-24 months post-RT, and manifests in the form of pulmonary fibrosis.4,5

Clinical diagnosis of lung injury is not easy, as the majority of patients have minimal and nonspecific symptoms. In addition, radiographic evidence of lung injury is not always accompanied by clinical symptoms. Pulmonary function tests (PFTs) and imaging techniques, such as chest X-rays and computed tomography (CT) scans, have been used for the diagnosis of radiation pneumonitis. Functional imaging methods, like single-photon emission computed tomography (SPECT), positron-emission tomography (PET) and magnetic resonance imaging (MRI), have been shown to be useful in the early detection of RIPI.7

The current study was planned to evaluate the utility of PFTs and lung perfusion scintigraphy (LPS) in assessing RIPI.

The prospective study was conducted at Zonguldak Bulent Ecevit University Hospital, Turkey, from May 2012 to October 2016. After approval from the institutional ethics review committee, the sample size was calculated using G-Power software with power 85%, a 0.05 and effect size 0.4.8

Those included were female breast cancer patients having undergone LPS pre- and post-RT. Patients with chronic lung disease, like asthma and lung infections as tuberculosis, were excluded, and so were those with a history of smoking. After taking informed consent, data was collected from all the patients regarding PFTs and diffusing capacity of lungs for carbon monoxide (DLCO) which were obtained pre-RT as well as 6 and 12 months post-RT. LPS was also performed at the same time intervals.

All patients were treated with a standard RT protocol on a linear accelerator (Varian IX, Palo Alto, CA) using 6-15MV photons. Patients who had undergone a radical mastectomy received a total dose of 50Gy in 25 fractions over the course of 5 weeks. A booster dose of 10-16Gy was applied to the tumour bed in patients who had undergone breast-conserving surgery. Treatment volume covered the entire breast/chest wall and/or supraclavicular/axillary lymph nodes. A clinical target volume was delineated on a planning CT with a treatment planning system (EclipseTM 60 Treatment Planning System, Varian Medical Services). MLD and lung volume receiving >20Gy (V20) were retrieved from the three-dimensional (3D) dose-volume histograms.

LPS was carried out using Tc-99m macro aggregated albumin. A dose of 70-140MBq, with particle diameter 15-100 mm, and average number of particles 400.000, was injected via the peripheral vein. Scanning was performed with a double-headed, large field of view gamma camera (Symbia S, Siemens, Germany) equipped with a low-energy, all-purpose collimator. Data was acquired at the anterior and posterior projection, with 1,000 kcounts per view and 128x128 matrix size. Quantitative analysis of lung perfusion scans was carried out. Regions of interest were placed over the anterior and posterior lung; the geometric mean of the anterior and posterior counts in each lung were calculated, and thus the percentage perfusion was calculated for each lung.

PFTs were performed using a computerised system (Jaeger Masterscreen, Hoechberg, Germany) before and at 6 and 12 months post-RT. Forced vital capacity (FVC), forced expiratory volume in first second (FEV1), and DLCO values were obtained. DLCO was measured by means of a single-breath method. The measurements were expressed as percentages of predicted values after adjusting for age, gender and height.

Data was analysed using SPSS 19. The accuracy of the numeric variables to normal distribution was analysed using Shapiro-Wilk test. Numerical data was expressed as mean ± standard deviation, and categorical data as frequency and percentage. Comparison of the two groups in terms of numeric variables was done using a vitality test of the difference between the two averages when a parametric test hypothesis was provided, and when it was not, the Mann-Whitney U test was used. The linear relationship between the two variables was examined using a Pearson correlation analysis. Results were evaluated within the 95% confidence interval (CI) and p<0.05 was accepted as significant.

None of the patients displayed symptomatic radiation pneumonia during the follow-up. Median DLCO dropped significantly from 86.14 to 81.41 at 6 months and to 81.21 at 12 months (p<0.05) post-RT. Although the FEV1, FVC and FEV1/FVC values also showed a tendency to decrease at 6 and 12 months post-RT, the decrease was not significant (p>0.05) (Table-1). 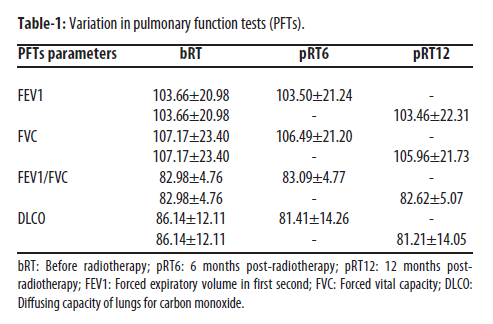 Significant changes were seen in LPS although none of the patients showed segmental/subsegmental perfusion defects on the lung perfusion scan. The median percentage of irradiated lung perfusion was decreased from 51.61% to 48.81% at 12 months after treatment (p<0.001). 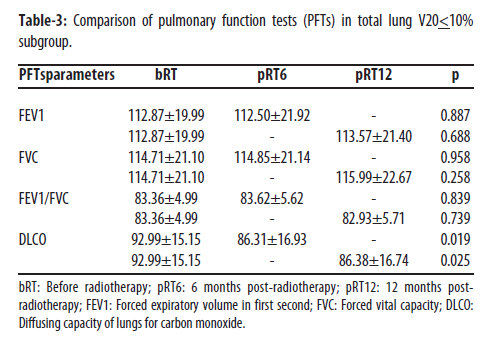 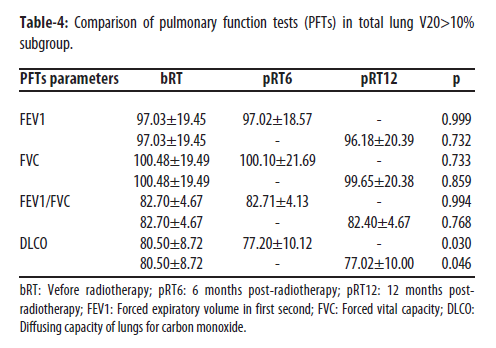 A part of lung tissue is included within the tangential fields of the radiation treatment portals, which may cause radiation-induced pulmonary toxicity. Some of these toxicities, like pneumonia or dyspnoea, can be clinically apparent, whereas some can be detected only by imaging or function tests without clinical signs. PFTs and nuclear medicine techniques are potent tools for monitoring lung functions at risk during radiation therapy.5,9

Studies have reported that an early decrease in PFTs occurs within 3-9 months post-RT, followed by a partial recovery 12-18 months post-RT and more pronounced deterioration at a later stage.10-13 Early reduction in PFTs suggest that radiation damage primarily begins from the alveolar-capillary structure as an inflammatory response. On the other hand, fibrosis of alveolar space leads to permanent late reduction in PFTs.14 The present study found a decrease only in DLCO values post-RT.

Marks et al. found SPECT to be a functional tool for predicting radiation-induced pulmonary function changes.15 Fan et al. evaluated both regional and global pulmonary functions by SPECT and PFTs in a prospective study and found a significant correlation between changes in local perfusion and PFTs.16 However, such a relationship was not determined in the current study.

Ventilation/perfusion lung scintigraphy is a useful imaging technique to evaluate pulmonary disorders. Ventilation scintigraphy shows the bronchopulmonary distribution of inhaled radioactive aerosols or gases, while perfusion scans reflect the distribution of pulmonary artery blood flow.17 Studies have shown that regional lung perfusion and ventilation were reduced at an early stage of RT and progressively decreased.18,19 As shown in the current study, the scintigraphy findings of radiation injury were related to the radiation dose and the irradiated lung. Liss et al. evaluated 50 breast cancer patients and pointed out that each 10Gy increase in the left lung during RT caused a lung perfusion ratio reduction by 0.06.19 In the current study, Tc-99m-MAA lung perfusion imaging was used to semi-quantitatively measure regional lung dysfunction induced by RT. There was a significant decrease in the contribution of the irradiated lung to the total lung perfusion post-RT. The treatment-related changes in lung scintigraphy were also associated with radiation dose, with the reduction in the pulmonary perfusion more pronounced in the V20>20% subgroup. Zhang et al. used lung perfusion SPECT for the evaluation of radiation-induced changes in patients receiving thoracic RT18 and reported that thoracic RT caused dose-dependent reductions in regional lung perfusion, which progressed up to 18 months post-RT and persisted thereafter. Gonzales et al. investigated pulmonary function changes with ventilation/perfusion scintigraphy in breast cancer patients receiving RT.20 The ventilation of the irradiated lung was found to be lower than that of the contralateral side. Additionally, the reduction in the ventilation was positively correlated with the irradiated lung volume. Zhang et al. showed that early changes in lung function post-RT were more successfully demonstrated with the quantitative lung perfusion SPECT than with PFTs.21

The main limitation of the current study is that the follow-up time was not more than 1 year which would have given give more information about radiation-induced late lung injury. Other limitations of our study are limited number of patients and use of PFTs rather than SPECT.

LPS may be a useful diagnostic tool for early detection of RIPI. Evaluation of lung function after RT with PFTs may not be sufficient as many factors may affect the results of PFTs.