This cross-sectional study was conducted in Mayo Hospital, Lahore, from July 16, 2018 to January 15, 2019 to observe the frequency of occurrence of non-alcoholic fatty liver disease in non-obese young medical professionals. One hundred and fifty-three subjects were selected using Simple Random Sampling Technique. SPSS version 25.0 was used to analyse the data. Out of a total of 153 medical professionals, 67 (43.8%) were males and 86 (56.2%) were females, median age was 23 years (inter-quartile range of 5 years), mean BMI was 22.79 ± 1.57 kg/m2, 122 (79.7%) subjects had normal texture of liver on ultrasonography and normal ALT levels, 21 (13.7%) had fatty liver with normal ALT levels, and 10 (6.5%) had fatty liver and elevated ALT levels (NASH). NAFLD and NASH are common ultrasonographic findings in seemingly healthy young adults with normal BMI. Awareness programmes should be carried out at the national level to educate the general public about the prevention and treatment of this disease through lifestyle and dietary modifications.

In non-alcoholic fatty liver disease (NAFLD), there is deposition of excessive fat (steatosis) in the liver. A number of causative factors are involved in the pathogenesis besides excessive amount of alcohol consumption. There is a significant prevalence (approximating 2-4%) of NAFLD worldwide; in the Western World it is estimated to be around 20-30% and in Asia between 15-20%.1,2 NAFLD can occur in all age groups but mostly affects individuals in their fourth and fifth decades of life. People with metabolic syndrome are more prone to develop NAFLD. Treatments targeting type 2 diabetes mellitus as well as other insulin resistant states e.g., weight loss, use of metformin and thiazolidinediones, result in improvement of NAFLD.3 Non-alcoholic steatohepatitis (NASH) is the advanced stage of NAFLD, which is characterised by hepatic inflammation, and progresses to scarring and ultimately cirrhosis which is irreversible. NASH is considered to be a major cause of cirrhosis of liver of unknown aetiology.4 Patients who are diagnosed at an early stage of NASH may show a good prognosis if they adhere to the treatment regimen.

In developing countries, ultrasonography is used for the detection of NAFLD/NASH because of its non-invasiveness and cost-effectiveness,5 although the gold standard for the diagnosis of NAFLD is liver biopsy as stated in the guidelines published by the American Association for the Study of Liver Disease (AASLD).6 Thus, the worldwide variability in prevalence of NAFLD is because of the different methods used for detection.6-8

Although significant data is available depicting a major proportion of obese individuals who have NAFLD, recent studies have suggested that NAFLD can also affect seemingly healthy and non-obese Asians.9 In a prospective epidemiological study carried out in India, 75% of non-obese Bengali Indians who were diagnosed to have NAFLD, had a BMI <25 kg/m2.10

A study conducted by Kwon Y. M. and colleagues on non-obese Korean adults showed the presence of NAFLD in 13%, based on abdominal ultrasound.11 A similar study conducted by Kim H. J. et al on non-obese and non- diabetic adults demonstrated that the prevalence of NAFLD in normal and overweight adults was 23.4% and reported a higher frequency in the overweight group compared to the normal weight individuals (34.4% versus 16.1%; P <0.001).12 Nishioji et al conducted a study on Japanese individuals and showed the prevalence of NAFLD in 25%, out of which 15% were non-obese.13

The rationale of the present study was to observe the frequency of NAFLD in non-obese young Pakistani citizens as previous international literature reported a high frequency and a rising trend of NAFLD in otherwise healthy subjects and very little data has been published about our population. Different results were expected in Pakistani population because of the different genetic makeup and variation in lifestyle. In case of a high frequency of NAFLD in the selected study sample population, early and timely intervention will prevent the occurrence of extreme forms of the disease like NASH, which is a major cause of cirrhosis and its related mortality. For prevention and control NAFLD, lifestyle modifications including programmes designed to change bad eating habits and encourage physical activity are important and advisable. In this way, we will be able to curtail the rising menace and epidemic of NAFLD.

This observational study was conducted in Mayo Hospital, Lahore from July 16, 2018 to January 15, 2019. Sample size of 153 individuals comprising young medical professionals was calculated with 95% confidence level, 7% margin of error and taking expected percentage of Non-Alcoholic Fatty Liver Disease i.e. 15.2%1 in non-obese adults using Simple Random Sampling Technique. The non-obese population i.e., those with a normal BMI, was defined according to the guidelines from the World Health Organisation (2000). According to World Health Organization (WHO), normal BMI is defined as 18.5-24.9 kg/m2, overweight 25-29.9kg/m2, Class I obesity is 30-34.9kg/m2, Class II is 35-39.9kg/m2 and Class III (extreme) obesity is BMI greater than 40kg/m2.14 Sample population consisted of medical professionals of King Edward Medical University as well as Mayo Hospital, Lahore. Individuals of both genders between the age group of 18 - 35 years and having BMI < 25kg/m2 were included in the study. Pregnant women and individuals with history of alcohol use, hypertension, diabetes, hyperlipidaemias and those with diagnosed chronic liver disease (including hepatitis B surface antigen or Anti HCV positive), autoimmune hepatitis, Wilson's disease, chronic cholestatic liver disease, or biliary disease, haemochromatosis (on history or medical record) were excluded from the study. All individuals who were taking medicines that could lead to hepatic steatosis e.g., aspirin, methotrexate, corticosteroids, isoniazid, oestrogen, tamoxifen, etc. were also excluded from the study.

After approval from the Board of Studies and Institutional Review Board (IRB) of King Edward Medical University, all healthy individuals who fulfilled the inclusion criteria were selected for the study. Informed consent as well as demographic information such as name, age, gender, height, weight was obtained from the individuals. Liver Function Tests, Viral Serology (HBsAg, Anti - HCV by ELISA) and ultrasonography of the abdomen was carried out to detect the presence of NAFLD. All information was recorded on a predesigned proforma and the collected data was entered and analysed by using computer software SPSS Version 25.0. Quantitative data, like age, was presented as median (since the sample was skewed in age and consisted of young individuals only) whereas  height, weight and BMI was calculated and presented in the form of mean + S.D. Qualitative data such as gender, and presence or absence of NAFLD was presented in the form of frequency and percentages.

Viral serology for hepatitis B and C, i.e., HBsAg and Anti-HCV were carried out by ELISA and was negative for all the subjects. On liver function tests, serum bilirubin levels were also normal in the subjects. A total of 122 (79.7%) subjects had normal texture of liver on ultrasonography and normal ALT levels. These subjects comprised normal healthy study population. Twenty-one (13.7%) medical professionals had fatty liver but normal ALT levels, i.e. they were labelled as having NAFLD, while 10 (6.5%) subjects had fatty liver as well as elevated ALT levels, i.e., NASH (Figure). 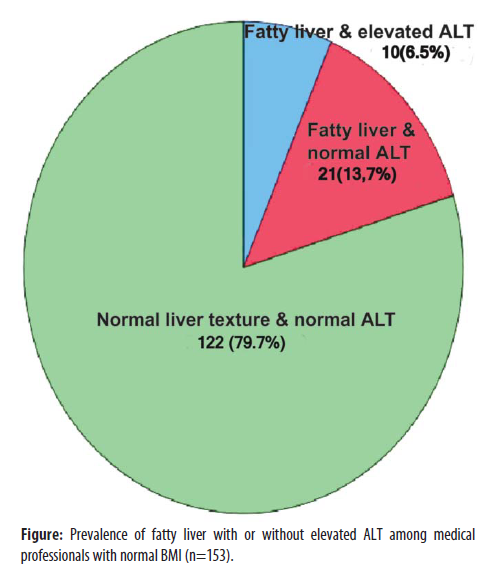 These results are comparable with the meta-analyses reported by Younossi and colleagues showing the prevalence of NASH to be between 1.5% to 6.45% in general population and the estimated global prevalence rate of NAFLD of about 24% in obese population.15

The results of the independent sample t-test showed that mean BMI of male subjects was significantly higher than female subjects (p<0.001). However, fatty liver finding on ultrasonography as well as ALT elevation had no significant associations with age and BMI of the study population (Table-1 & 2). 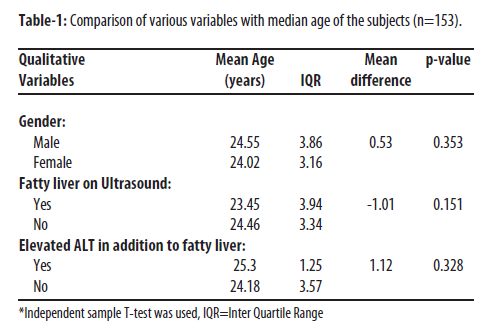 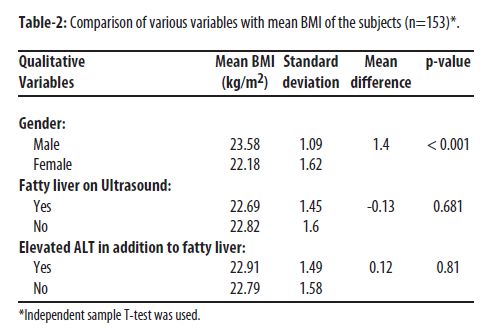 NAFLD is considered to be a major precursor of chronic liver disease worldwide.17 Apart from ethnic origin, males and older individuals have an increased prevalence of the disease compared to their female counterparts.18,19 Numerous studies conducted worldwide have reported variable frequencies of NAFLD in the studied subjects. The frequency ranges from >20% in the Western population20 to about 12-24% in the Asians19 and a worldwide prevalence of 2-4%1,2 to 6.3% to 33%.6 in certain studies. The variation in results may be attributed to different ethnic and social backgrounds, dietary habits and lifestyles and the method used to detect the presence of NAFLD i.e., liver biopsy as opposed to ultrasonography for detection of NAFLD.

In a study conducted by Kim H.J. and colleagues, out of 768 non-obese Korean adults with a BMI<30kg/m2 460 individuals had a BMI <25kg/m2. The prevalence of NAFLD was shown to be 23.4% in the study population,8 considering it an early indicator of metabolic disorders in non-obese persons. These results are comparable with our study as the cumulative prevalence of NAFLD in our study population was about 20.2%, i.e. 13.7% had a fatty liver and normal ALT levels and 6.5% had a fatty liver and elevated ALT levels. Keeping normal weight BMI cut-off at 23kg/m2 according to the WHO recommended BMI categories for healthy non-obese Asian population16 , 19(24.4%) subjects were found to have fatty liver and only 4(5.1%) had fatty liver with raised ALT levels.  Taking cut-off BMI as either 23kg/m2 or 25kg/m2 yielded comparable results. The results of this study differed greatly when compared to obese individuals in which the prevalence of NAFLD ranged from 57.5% to 74%.21-23

A prospective epidemiological study was conducted by Das K. and colleagues on 1911 non-obese Bengali adults. The cumulative prevalence of NAFLD was 11.0% i.e., 8.7% with NAFLD and normal ALT levels and 2.3% with NAFLD and raised ALT levels. Out of these patients, 75% had a BMI<25kg/m2 and 54% neither had abdominal obesity nor were overweight.10 If we compare it with the large population-based study by Amarapurkar and colleagues, 91% of obese individuals who had a BMI>30kg/m2 had evidence of steatosis on ultrasound.24

Bedogni G. and colleagues carried out a cross-sectional study in the town of Campogalliano (Modena, Italy), within the context of the Dionysos Project and reported a 20% prevalence of NAFLD that was not associated with suspected liver disease but had many associations with metabolic syndrome. These results were comparable with the results of our study.25

Our study was limited because it was conducted on a small group of educated people belonging to a particular class, i.e. only medical professionals, studying and working in one particular institution of Lahore that is not representation of the entire Pakistani population, so we cannot generalise the results. We need to encourage large cohort studies at a mass level conducted across all the provinces of Pakistan to validate the results of our study.

NAFLD is not uncommon amongst seemingly non-obese young adults with normal BMI. Since Asians have a higher percentage of body fat compared to their white counterparts of the same age, sex, and BMI, so WHO has set up a different cut-off BMI is set up for normal weight Asians i.e., 23kg/m2 rather than 25kg/m2. This lower BMI cut-off not only helps to identify population at a greater risk of unwanted adverse health outcomes but also facilitates in formulating healthcare policies and guidelines for public awareness.

For our study, we selected all the subjects having a BMI <25kg/m2 and concluded that out of 153 individuals, 31(20.2%) of the study population had NAFLD. When we set up the cut-off BMI as <23kg/m2, 23(29.5%) subjects were noted to have NAFLD whereas all subjects that fell in the 23-25kg/m2 BMI, 18(24%) individuals had NAFLD. This not only validates the WHO low cut-off BMI for Asians but also unmasks many seemingly non-obese and healthy people with fatty liver.

16.    WHO Expert Consultation. Appropriate body mass index for Asia populations and its implications for policy and intervention strategies. Lancet. 2004; 363:157-63.

Correlation of serum calcium with severity of acute ischaemic stroke