While the median survival in patients with glioblastoma has not improved significantly over the past decade, aggressive attempts have been made on palliation and improving quality of life in these patients. A confluence of two debilitating pathologies which massively distorts the normal day-to-day functioning of the patients who experience it, seizures in glioblastoma patients portends a poor prognosis. There exists a paucity of reported seizure outcomes after glioblastoma treatment in neurosurgical literature. Herein we present a review examining post-operative seizure control in patients with glioblastoma.

Glioblastoma is the most frequent primary brain tumour in adults, and has one of the poorest prognoses among all brain tumours.1,2 Despite advancement in the field of medical and surgical neuro-oncology, the median survival has constantly remained below 2 years for the past decade.3,4 This already grim outlook is further aggravated by the presence of seizures in patients with glioblastoma, which negatively impact the patients’ physical, cognitive, psychological, and social well-being.5

Seizures have been reported to occur in 30 - 62% patients with glioblastoma, with one-third occurring post-operatively.1,5-7 The pathogenesis of tumour-related seizures may involve a deficiency of gamma-aminobutyric acid–mediated inhibition, but this remains largely understudied.6 Seizure recurrence or worsening seizure control may be associated with tumour molecular genetic markers, extent of resection, and pharmaco-resistance to treatment with first-line anti-epileptic drugs (AEDs).4,6,7

Although tumour related epilepsy (TRE) in patients with glioblastoma has become an important concentration for research, aiming to ameliorate the quality of life of these patients in the face of a dismal survival outcome, evidence on seizure control, and therein, improved outcomes, remain sufficiently low. Here we have reviewed the literature on seizure control in patients after glioblastoma resection. 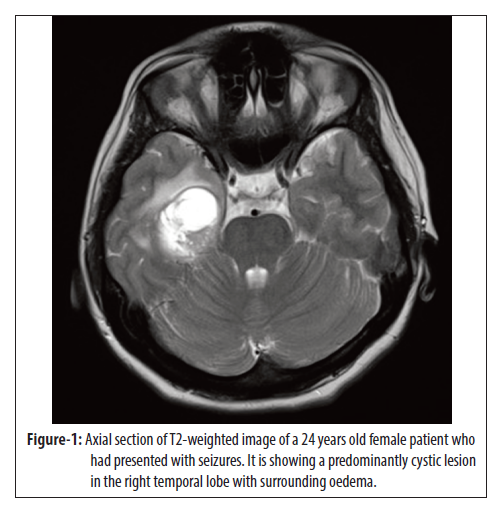 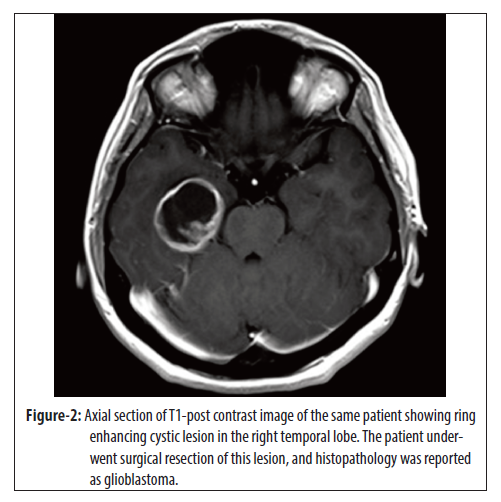 Early recognition of factors associated with prolonged seizure control may help guide timely and strategic therapeutic interventions aimed at improving the quality of life for patients with high grade astrocytoma.3 In 2009, Chaichana et al., retrospectively reviewed 648 patients who underwent primary resection of a hemispheric anaplastic astrocytoma (AA) (n=143) or glioblastoma (n=505) at their center. The patients were evaluated for the effects of surgery on seizure outcomes, and factors associated with prolonged seizure control. Of those who presented with seizures (n=153), outcome 12 months after surgery was Engel Class I (seizure free) in 77%, Class II (rare seizures) in 12%, Class III (meaningful improvement) in 6%, and Class IV (no improvement) in 5%. Increased Karnofsky Performance Scale (KPS) score was significantly associated with prolonged seizure control, while uncontrolled pre-operative seizures and parietal lobe involvement were statistically significant for poor seizure outcomes in these patients. The authors also reported an independent association of seizure recurrence with tumour recurrence (p=0.006) in patients who had achieved postoperative seizure control previously.3

Kerkhof et al., in 2013, retrospectively examined the efficacy of valproic acid (VPA) and levetiracetam (LEV), alone and as poly-therapy, on seizure control in 291 patients with glioblastoma. Seizure freedom was initially achieved in 41% patients on VPA, 43.3% patients on LEV, and 76.7% on VPA/LEV polytherapy. At the end of the

6-month follow-up, 77.8% of the patients on VPA alone, 69.5% on LEV alone, and in 60.3% on VPA/LEV dual therapy (with ongoing seizures on monotherapy) had achieved complete seizure control. Owing to the decreased total dosages of AEDs required for a similar or better antiseizure effect, and hence, reduced drug toxicity, the authors concluded that synergistic co-therapy with LEV was superior to monotherapy, especially for achieving prolonged seizure control.1 But later in 2015, Ening et al., suggested better seizure outcomes with monotherapy, owing to higher patient compliance.8 Neal et al., suggested benefit in therapies targeting glutamate in TRE.9 In 2016, they retrospectively evaluated the impact of peri-tumoural and/or tumoural glutamate on postoperative seizures in a cohort of patients with grade 2 to grade 4 supra-tentorial gliomas. In a subgroup analysis of 81 glioblastoma patients receiving adjunct chemotherapy, peritumoural glutamate concentration was significantly associated with time to first post-operative seizure (HR 3.10, CI 1.20–7.97) p=0.02, and hence, shorter periods of post-operative seizure freedom.9 In 2019, Feyissa et al., analyzed a single-center retrospective cohort of 68 patients with gliomas, out of which 31 had glioblastoma. Of the total, 31 patients developed post-operative seizures, with median seizure freedom duration of 10.5 months. The authors reported that IDH1 mutation (p=0.035) and MGMT gene promotor methylation (p=0.032) conferred a significant benefit in post-operative seizure control (PSC) over those with IDH wild type. However, no association of PSC was reported with age, sex, extent of surgery, glioma grade, location and histopathological subtype, p53 expression, ARTX retention, or 1p/19q co-deletion status. Larger longitudinal studies were suggested for better evidence and customizing treatment strategies accordingly.5 In a secondary analysis of a previously published multi-center randomized control trial of 562 elderly glioblastoma patients in 2020, Climans et al., examined seizure outcomes in patients undergoing chemotherapy with temozolomide plus short-course radiotherapy versus those undergoing radiotherapy alone.  Almost all patients were followed until they died. In the radiotherapy alone group, 68 (24%) patients had a documented or self-reported post-operative seizure versus 83 (30%) patients in the temozolomide plus radiotherapy group (p=0.15). Shorter seizure free interval was also seen in the only-radiotherapy group of patients (p=0.054). These results, while not statistically significant, were suggested to be used as a basis for better longitudinal studies especially powered to detect differences in seizure outcomes, as they did provide some evidence in temozolomide’s minimal impact on seizure control in glioblastoma patients.10

Seizure freedom is one of the goals in the treatment of glioblastoma patients with epilepsy. While AED treatment should be started, it should be realized that a significant percentage of patients will still have seizures despite therapeutic levels of AEDs. Polytherapy with AEDs, supra-total resection of the lesion, chemotherapy with temozolomide, and targeted molecular therapy may play a role in improving patient outcomes.