Abdominal wall sarcoma belongs to a heterogeneous group of uncommon malignant neoplastic conditions with differentiated morphological patterns and originating from mesenchymal tissues. Soft tissue sarcomas predominantly involve the lower and upper limbs and retroperitoneum. We present a case of a 30-year-old patient, complaining of swelling in the left flank whose magnetic resonance imaging (MRI) revealed a solid tumour on the abdominal wall of the flank and biopsy turned out to be synovial sarcoma.

A 30-year-old female presented with abdominal pain and a palpable mass in the left side of the abdomen since 8 months. MRI scan demonstrated solid and cystic mass lesion in the outer margins of the left lateral rectus abdominis muscles with internal vascularity suspicious of a neoplastic lesion (figure). 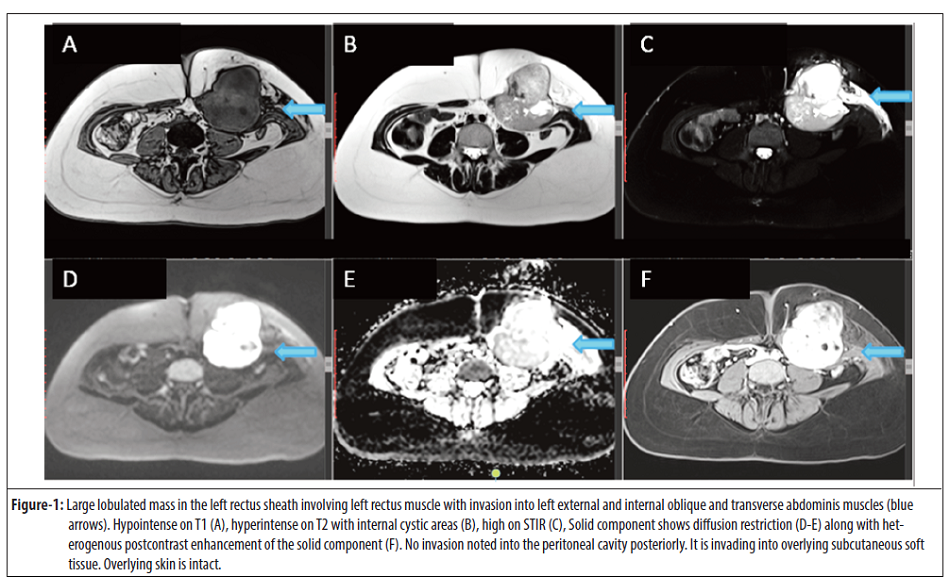 On biopsy, the lesion was found to be a spindle cell neoplasm consistent with synovial sarcoma monophasic. No distant metastasis was seen. Patient underwent surgery without any signs of recurrence. Later on, chemotherapy was planned and post chemotherapy period was uneventful.

Soft tissue sarcomas make up about 20% of paediatric and 1% of adult malignant tumours. About 60% arise in extremities, 19% in the torso, 15% in retroperitoneum and 9% in the head and neck region.1 Synovial sarcoma (SS) is mesenchymal malignancy that appears in close association with joint capsules, tendon sheaths, bursae and fascial structures which is believed to arise from primitive mesenchymal cells; not synovial cells.

Although rare, SS in the abdominal wall tends to occur more frequently in females than in males. Only few such cases have been reported in literature over the last five decades.2

Imaging features are essential for staging and planning of surgical resection. On MRI, SS typically appears as prominently heterogeneous multilobulated soft tissue mass with signal intensity similar to or slightly higher than that of muscle on T1 images. The presence of multi-lobulation and marked heterogeneity on T2 images are highly suggestive of a diagnosis of SS.3