Pseudomyxoma Peritonei, a massive mucinous peritoneal collection due to a rare epithelial neoplasm, can be effectively treated with Cytoreductive Surgery and Hyperthermic Intraperitoneal Chemotherapy (CRS-HIPEC).

Stress-induced Cardiomyopathy, also known as Takotsubo Cardiomyopathy Syndrome (TTS) is defined as temporary left ventricular dysfunction due to stress and/or surgery.1 Pseudomyxoma Peritonei (PMP), a rare clinical condition which occurs in 1–2 people in a million,2 is characterized by massive amounts of mucous in the peritoneum mostly due to a tumour of the appendix.3 Despite the slow spread, the long term survival rate is  50% and 10%-30% at 5 and 10 years, respectively.4 The gold standard treatment of PMP is Cytoreductive Surgery and Hyperthermic Intraperitoneal Chemotherapy (CRS-HIPEC)3 as it not only improves the quality of life but has been shown to have better survival rates.3 A retrospective multicentre series of 2,298 patients, showed a 10-year survival rate of 63% after CRS-HIPEC.5

A 43 years old female presented at Shifa International Hospital, Islamabad on 3th March 2019 with complaints of abdominal swelling and early satiety. Upon taking her medical and surgical history, she had experienced similar symptoms in the past and was diagnosed with Mucinous Ovarian Adenocarcinoma. She underwent elective tumour debulking. She later developed metastasis which were treated by total abdominal hysterectomy and bilateral salpingo-oophorectomy in August 2018. The patient had received four cycles of neoadjunctive and adjunctive chemotherapy, each with Carboplatin and Paclitaxel. However, she recently started developing notable abdominal swelling and early satiety again.

On evaluation, she was an alert and well-oriented individual , with a height of 162 cm and weight 51 kg. Her abdominal CT scan showed findings that were typical of PMP with the suggestion of rupture of appendiceal mucocole as the primary cause. However, no pathology was found in her chest. Due to her current disease, she was  offered CRS-HIPEC.

Preoperatively, she had good functional class and her preoperative blood test was within the normal limit except for mild anaemia (Hb=10.2 g/dl). Her electrocardiogram and echocardiography showed sinus tachycardia and an ejection fraction of 55%.

She underwent CRS which included splenectomy, appendectomy, cholecystectomy, excision of pelvic mass adherent to the bladder, excision and repair of the bladder and peritonectomy. This was followed by HIPEC with Mitomycin 20 mg, at 42oC for 90 minutes. The intraoperative blood loss was 2000 ml. She was transfused 750 ml of packed red blood cells and six litres of crystalloids and 200 ml of Albumin. She remained stable intraoperatively except for occasional episodes of tachycardia and a need for low-dose norepinephrine infusion to support haemodynamic parameters.

After the surgery, the patient was extubated and shifted to Intensive Care Unit. After forty-eight hours of surgery, she complained of chest pain and developed tachycardia, hypotension, tachypnoea and decrease in oxygen saturation (SpO2: 86% on room air). Her 12-lead ECG showed broad-complex tachycardia and depression of ST segment in leads V3-6.

Her echocardiography (Table 1) showed severe systolic dysfunction with EF of 20%, along with severe pulmonary hypertension. Her cardiac enzymes and BNP levels (Table 2) were also raised. 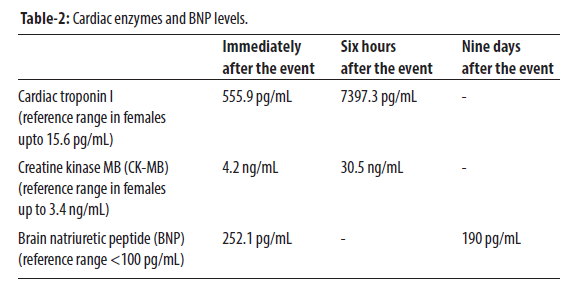 She was started on norepinephrine at 0.04 µg/kg/min. Aspirin and clopidogrel were administered. Enoxaparin 60 mg subcutaneous was given on the following day.  Her respiration was supported by Bilevel Positive Airway Pressure. Cardiology consult recommended coronary angiography but was refused by the patient. Her condition improved overtime and she was discharged on the seventh post-operative day. On 2-weeks follow-up visit, her echocardiogram revealed an improvement in ejection fraction to 45%. No other abnormalities were noted, and she was scheduled for regular follow-ups.

CRS-HIPEC involves removal of the PMP affected areas, peritoneum and other intra-abdominal organs, followed by perfusion of heated chemotherapy agent at 42-43oC for

The morbidity after CRS-HIPEC can be either related to surgery or chemotherapy. Chemotherapy effects wound healing and increases the risks of infectious complications. The surgery-related morbidity includes abscess, fistula, anastomotic leak, postoperative ileus, wound infection, bleeding, thrombosis, pulmonary embolism, pleural effusion, pneumothorax, and cardiac arrhythmias.7 However, there is no case report showing a relationship between CRS-HIPEC and stress cardiomyopathy.

TTS on electrocardiogram may mimic acute coronary syndrome. It may also present with raised myocardial enzymes even with no obstructive coronary artery disease. However, coronary angiography is often normal or typically shows less than 50% luminal stenosis. Most patients recover completely, and the severely reduced left ventricular systolic function recovers over four to eight weeks.8

Stress-induced Cardiomyopathy is predominant in females. Patients mostly present with chest pain and dyspnoea. However, other more serious signs such as cardiogenic shock, hypotension, arrhythmias, and cardiopulmonary arrest are relatively common.8 TTS is most significantly associated with an identifiable stressor, ranging from an emotional stressful event without a physical component to a physical stressor. Typically, physical stressors involve major surgery, orthopaedic trauma, exacerbation of obstructive airways disease, malignancy, chemotherapy and infections.9

In TTS, as compared to ACS, initially the troponin values are usually similarly raised, however, the peak values are noticeably lower. There is only slight elevation in creatinine kinase and a remarkable increase in the plasma BNP which continues to rise till approximately 24–48 hours after symptom onset.10

In order to correctly diagnosis Stress-induced Cardiomyopathy, the International Takotsubo Registry provides clinicians with the InterTAK Diagnostic Score. According to the scoring system, the predicted probability of TTS increases with the increasing score points of a patient. There is a chance of less than 1%, if the patient has 30 score points. Similarly, patients with 50 points are 18% and patients with more than 70 points are 90% more likely to have TTS.10

In the present case, the patient had emotional stress, and physical stress, adding up to a score of 62 points indicating more than fifty percent probability of TTS. Although the mechanism of TTS for this patient was uncertain, its occurrence seems to be associated with anaesthesia, surgery, post-operative pain, chemotherapy and excessive stress inflicted by the outcome of this postoperative treatment. This patient had chest pain, dyspnoea, T-wave inversion in leads V3-V5 on ECG, mildly elevated cardiac enzymes and BNP levels, and akinetic mid antero-septum on echocardiography. All of which leads to a diagnosis of stress-induced Cardiomyopathy.

This case of a 43-year-old female highlights stress-induced Cardiomyopathy as a complication of the gold standard treatment modality available for PMP. In this case report, the diagnosis of stress-induced Cardiomyopathy was made using the InterTAK Diagnostic Score, and factors related to the presentation, aetiology, associations and management are identified to prevent morbidity and mortality associated with the treatment modality.

Acknowledgement: We acknowledge our patient for giving her informed consent for publishing her case.