Solid pseudopapillary neoplasms are rare and represent approximately 4% of all cystic pancreatic tumours, and predominately affect females. They have an excellent prognosis, however 10-15% of the patients show metastasis at the time of surgery or recurrence of tumour during follow-up after pancreatectomy. Surgical resection is the recommended treatment.

We present a rare case of a 15-year-old female, with a pseudopapillary tumour of the pancreas which was diagnosed pre-operatively.

The solid pseudopapillary neoplasm (SPN) of the pancreas, also known as a papillary-cystic tumour or Frantz tumour, is a distinct epithelial neoplasm of unfamiliar origin. Solid pseudo papillary neoplasm of the pancreas is a low-grade malignant tumour derived from exocrine cells and composed of poorly cohesive epithelial cells, forming solid and pseudopapillary arrangement and lacking a specific line of pancreatic epithelial differentiation.1 In adult population it accounts for approximately 2% to 3% of pancreatic neoplasms but differs from other pancreatic tumours by a female predominance and a low risk of malignancy. SPN for the most part occurs in the younger population and occasionally in children, contrary to other pancreatic carcinomas. It also seems to have a predilection for Asian and African American women.2

It is a rare pancreatic tumour, usually presenting with a palpable abdominal mass. It is commonly seen in females, presenting during their second or fourth decade of life.

Due to advances in diagnostic techniques, there has been a recent increase in the number of cases of these pancreatic tumours. The tumour differentiation is important from other neoplasms of the pancreas because complete resection is curative in many cases and provides a chance of long-term survival.3

We present the case of a 15-year-old girl with pseudopapillary tumour of the pancreas. She underwent complete surgical resection.

A 15-year-old girl presented to our outpatient department at Aga Khan university hospital, with complaints of left lumbar pain for the past one month and fatigability and weight loss.

Abdominal examination revealed a palpable mass in the left upper quadrant; however, the rest of the examination was unremarkable. Investigations revealed an elevated LDH levels of 324gm/L. Ultrasound of the abdomen showed a 13.1x14.3cm well-circumscribed cystic and solid mass in the upper abdomen. 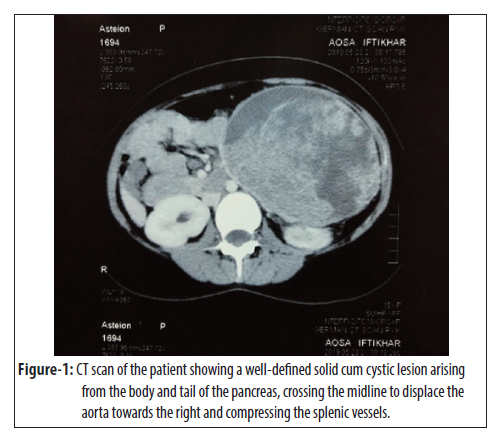 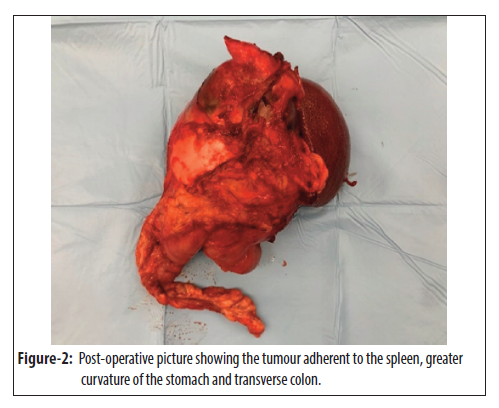 It measured 115 x 125mm, the lesion was seen crossing the midline and abutting the stomach and left kidney. The aorta was displaced towards the right side. The left renal artery could not be separately visualised. The lesion was causing encasement of the splenic vessels resulting in the formation of splenic varices.

This case was later discussed in our institutional multidisciplinary Paediatric tumour board meeting. As there are no adjuvant treatment options for this pathology, surgical excision was advised. Preoperatively the patient received prophylactic vaccination for possible need for splenectomy.

She underwent exploratory laparotomy plus distal pancreatectomy with splenectomy and bowel anastomosis in August 2019.

It was removed completely intact along with a portion of the stomach, colon with its attached mesentery, and lymph nodes and spleen. No tumour was left behind grossly and there was no tumour spillage.

The patient’s postoperative course was unremarkable. She was discharged in a stable condition on the seventh post-operative day.

Final histopathology showed solid pseudopapillary neoplasm of the pancreas. All margins were tumour free.Final tumour grading was pT3, pN0. On the six-month follow up visit our patient had no significant complaints and was clinically well.

Most SPNs are asymptomatic and incidentally found by imaging. In some cases, the patients may present with nonspecific symptoms, including abdominal discomfort, nausea, vomiting, asthenia, or pain. In patients with large neoplasms, acute abdomen resulting from traumatic intra tumoural haemorrhage has been described. Tumour markers’ serum levels are normal, so they are not useful in the diagnostic workup. Rare SPNs have been found to be associated with familial adenomatous polyposis.4-6

Cytological examination is usually the first and most used approach in the diagnostic workup of pancreatic solid and cystic masses, so the first diagnosis of SPN is frequently cytological. Because of its peculiar clinical and prognostic features, a definitive and quick diagnosis of SPN is mandatory to avoid aggressive surgery or chemotherapy. Endoscopic ultrasound-guided fine-needle aspiration is the most frequently used procedure, which in expert hands is a safe, cost-effective, and valuable technique.7 Solid pseudo papillary neoplasm is a solitary tumour. In adults, it is slightly more frequently located in the tail, whereas in children it is located in the pancreatic head. Tumours are round, well demarcated, and generally large, with an average size of 8 to 10cm (range, 0.5–25.0 cm). The cut surface shows a variable appearance from case to case: some cases are completely cystic, whereas others show a variable combination of solid, cystic, haemorrhagic, and necrotic areas. More rarely, SPNs have a predominantly solid appearance, especially when small. Although generally well-circumscribed, rare tumours extending into the duodenal wall or other adjacent structures have been reported.8,9

It is well known that tumour cells characteristically show nuclear/cytoplasmic immunoreactivity for b-catenin. In addition, they are also positive for CD10, progesterone receptor, cyclin D1, and vimentin. A very characteristic feature is represented by the immunoreactivity of CD99 that shows a peculiar dot-like para-nuclear expression. Aberrant expression of E-cadherin is a typical feature of SPN, and two distinct patterns of immunoreactivity have been well-documented and depend on the antibody used.10,11

Function-preserving surgery is advocated as a treatment of SPN. Liu et al reported 243 patients (181 females and 62 males) who underwent complete resection. A total of 239 patients were free of local recurrence or distant metastasis after a median follow-up of 46 months.12

In another study Tjaden et al analysed 52 patients out of which 85% were females. Seven patients exhibited a malignant behaviour of SPN whereas five patients developed recurrence of tumour, after a median follow-up of 21 months. All the patients were alive during the follow-up time (median 54 months), the 5- and 10-year rates for disease-free survival were 89.0% and 81.6%, respectively.13 The minimally invasive approach with its better short-term perioperative outcomes carries immense functional benefits in addition to the quality-of-life such as better pain control, decreased analgesic requirement, increased early ambulation, and shorter duration of ileus, compared with the open approach. The results of meta-analysis published by Tan et al favours minimally invasive surgery over open approach as far as intraoperative blood loss and blood transfusion requirements are concerned, which may be due to the smaller incisions and finer operative dissections used in minimally invasive surgery.14

SPN shows a favourable prognosis, but is not yet fully understood regarding its biological behaviour and factors that are associated with tumour spread or recurrence.

Solid pseudopapillary neoplasm of the pancreas is manifested as large, encapsulated mass, usually with extensive necrosis. An aggressive approach with complete surgical resection, is recommended. Poor long-term prognosis is seen in patients with incomplete resection, even though the tumours are very slow-growing.

Consent: The parents of the patient consented for publication of the case.

9.      Schlitter AM, Konukiewitz B, Kleeff J, Klöppel G, Esposito I. Recurrent duodenal ulcer bleeding as the first manifestation of a solid pseudopapillary neoplasm of the pancreas with hepatic metastases. Dtsch Med Wochenschr 2013; 138: 1050–3.

Child physical abuse: awareness and practices of medical and dental doctors in Pakistan