The following is a case report of a 17-day-old female baby, born at 35 weeks’ gestation, weighing 2.6 kg. She was brought to us with reluctance to feed, swelling over the left side of her face and a fever documented at 102oF, along with an erythematous, tender, localised swelling over the left pre-auricular region that measured 2 x 1.5 cm in size. Diagnostic workup and ultrasound findings were consistent with parotitis; however, her blood culture was negative. The patient was managed on antibiotics but subsequently, developed a nosocomial infection while she was admitted in the hospital, which prolonged her hospital stay to a total of 16 days. Nevertheless, she had complete resolution of the signs and symptoms on her follow-up visit.

Acute parotitis should be considered in the differential diagnosis of a neonate presenting with facial swelling, reluctance to feed or incessant crying. Timely and appropriate management can result in good recovery and minimising the potential for complications.

Infection of the parotid gland is termed parotitis which is a rare finding in neonates. A few sporadic cases have been reported in the literature. In 2016, Costa L et al1 reviewed all papers published since 1970, and reported 50 cases from the English literature. Another study has reported a prevalence of 3.8/10,000.2 It usually presents with tenderness, warmth, erythema and swelling over the parotid gland. Fever, purulent discharge from the Stenson duct and other non-specific findings such as incessant crying or inability to feed may or may not be present.3,4

The most common cause of neonatal parotitis is Staphylococcus aureus,3 which constitutes normal flora of the oral cavity and hence can infect the parotid gland via direct extension. Early detection and appropriate treatment with antibiotic therapy confers a good prognosis.3,5

We herein describe a case of acute parotitis in a 17-day-old neonate and outline the treatment protocol given to the patient that led to its resolution. Written informed consent was obtained from the patient’s parents for the publication of this case report, along with the photograph.

A 17-day-old female baby weighing 2.6 kg presented at Dr. Ziauddin Hospital, North Nazimabad, Karachi, in November, 2019 with complaints of reluctance to feed for one day and swelling over the left side of her face since morning. The mother also reported decreased activity, abdominal distension, an episode of vomiting where the baby expelled milk, and fever. The fever was documented to be 102oF and was relieved by administration of Acetaminophen drops. No other significant history was given.

The baby was born at 35 weeks to a mother with gestational diabetes (diet-controlled) via an elective C-section due to tenderness over the previous C-section scar. Her APGAR score is unknown, although she cried immediately after birth and her weight was 2.6 kg. After birth, the baby was both bottle and breast fed.

When the child presented to the hospital, she was irritable and showed signs of some dehydration with a heart rate of 138 beats/min, blood pressure of 65/32 mmHg, temperature of 99.6oF, respiratory rate of 52 breaths/min, oxygen saturation of 95% at room air, and capillary refill time of <3 seconds. Her examination revealed ill-sustained sucking reflex, and an erythematous, tender, localised swelling over the left pre-auricular region that measured 2 x 1.5 cm in size. It was mobile, soft in consistency, and non-fluctuant. No purulent fluid was expressed from the Stenson’s duct when pressure was applied over the parotid gland. The rest of the examination revealed no findings, which led us to two differential diagnoses: acute parotitis and infantile cortical hyperostosis.

Her complete blood count revealed an increased total leukocyte count (TLC) of 22.3 x 109/L with neutrophil predominance (73%). She had an elevated blood CRP level of 15.8 mg/dl (normal <5.0 mg/dl) and an infective picture in the urine detailed report (Table). 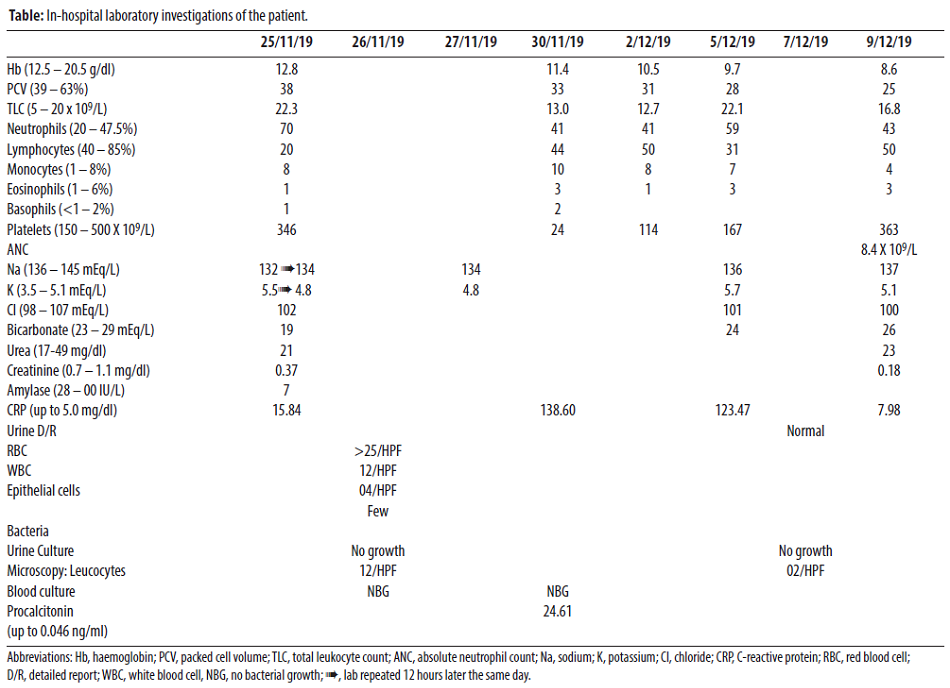 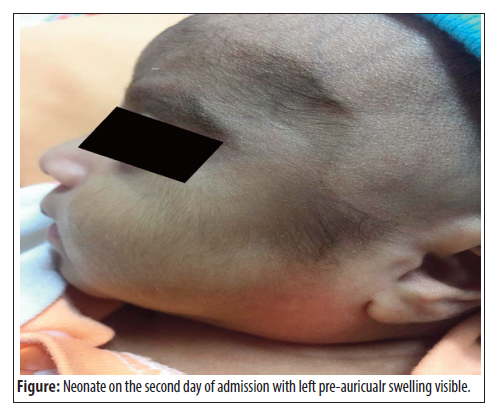 Parotid sonography showed a well-defined hypoechoic area within the left parotid gland measuring 1.9 x 1.4 cm, and a small (1.0cm), reactive submandibular lymph node on the left side, confirming the diagnosis of focal parotitis with evolving abscess, which could not be drained. The right parotid gland was normal.

Blood and urine cultures were obtained and then empirical antibiotic therapy with intravenous Cefotaxime and Vancomycin was instituted, along with supportive care. Her blood and urine cultures were sterile, and by the fourth day of admission (DOA) a decrease in the size of the parotid swelling was noted, along with the resolution of her symptoms and successful trial of oral feeding. However, on the sixth DOA, the patient developed fever spikes and loose, watery stools along with elevated CRP levels

(138.60 mg/dl cut off 5.0 mg/dl) and TLC of 12.7 x 109/L. Therefore, with the suspicion of hospital acquired infection, Cefotaxime was replaced with Meropenem, after ordering a repeat blood culture and procalcitonin levels. The blood culture was negative and the procalcitonin was raised at 24.61 ng/ml (cut off up to 0.046 ng/ml)

Repeat ultrasound of the parotid gland (on sixth DOA) showed a 1.5 x 1.4 cm left parotid gland with re-demonstration of a hypoechoic region and increased vascularity within its superficial part, without necrosis or abscess. Fever spike and loose stools, along with septic workup, also showed improvement after four days of new antibiotic combination. The patient was discharged with minimal residual parotid swelling with no known complication associated with parotitis, after a hospital stay of 16 days on oral Ciprofloxacin for five days due to elevated CRP and TLC count that were improving. The mother was advised to continue to breastfeed and proper hygienic measures were recommended for bottle feeding.

The patient was followed up in the outpatient department after a week, and there was complete resolution of her symptoms with no residual swelling.

The presented case is of a 17-day-old female patient with acute parotitis who presented with reluctance to feed, swelling over the left side of her face, abdominal distension and fever.

Known risk factors include premature birth, dehydration, congenital anomalies, prolonged orogastric feeding and septicaemia.3,5 In one report, 38% of the patients with parotitis were born prematurely6 and hence, we believe the premature birth status and poor feeding practice of our patient had made her susceptible to develop parotitis.

As in our case, the patients frequently present with fever, redness, swelling, warmth and tenderness over the parotid gland.2,3 Incessant crying or agitation alone, that is aggravated by feeding, should also prompt a physician to consider the possibility of parotitis.3,5

Laboratory findings are usually non-specific but an elevated ESR, amylase or TLC with neutrophil leucocytosis may be helpful in identifying the disease process. However, their absence does not rule out the possibility of acute suppurative parotitis, as normal concentrations of amylase may also be seen due to the immaturity of this enzyme in neonates.6 Expression of purulent discharge from the Stenson duct is pathognomonic of the disease process and a positive pus culture can confirm the diagnosis. In some cases, where the pus culture is sterile, sonographic evidence of inflammation can establish diagnosis. Ultrasound is a non-invasive and cost-effective imaging modality that can visualise inflammation and oedema of the parotid gland, along with signs of abscess formation, necrosis or fibrosis.1,5

The patients usually responds well to conservative management with parenteral antibiotic therapy for 7 – 10 days.1,3 Because bacteria from the oral cavity are responsible for 94% of the parotid gland infections, penicillinase-resistant penicillin such as Oxacillin or a Cephalosporin, in combination with an Aminoglycoside (e.g. Gentamicin), are recommended as empirical therapy in uncomplicated cases.1,6 In our case, we initiated empirical treatment with Cephalosporin and Vancomycin since we could not drain the pus for culture. Our patient responded well to the initial antibiotic regimen and the parotid inflammation had started showing signs of resolution, when she contracted a nosocomial infection, which halted the progress of her recovery and led to a prolonged hospital stay. Hospital-acquired infections and sepsis are treated by empirical antibiotics and treatment is directed against most likely organisms, based on how the patient presents clinically and the pathogen profile of the given area or the community as observed by the neonatal unit.7 We employed the same principle and provided broad spectrum coverage with Vancomycin and Meropenem, and later discharged the patient on oral Ciprofloxacin due to elevated CRP and TLC levels. Oral Ciprofloxacin was selected as per institutional antibiogram and also considering the treatment options of nosocomial infection in neonates.8

The patient should also be watched closely for other complications such as facial nerve palsy, salivary gland fistula, mediastinitis, extension to the external auditory canal, or the formation of an abscess.3,5

Acute parotitis should be considered in the differential diagnosis of a neonate presenting with facial swelling, reluctance to feed or incessant crying. Timely and appropriate management with antibiotics and drainage of abscess, if necessary, can result in good recovery and minimise the potential for complications.

Conflict of interest: All authors declare that they do not have any conflicts of interest.

Funding disclosure: This study was not funded by any organization or institution.