There has always been a trend towards less invasive options for treatment of urinary tract stones, which ultimately led to a major decline in opting for open surgery. Miniaturisation of endoscopic equipment, increased optical quality and better visualisation, invention of HoYAG laser lithotripsy and increased overall endo-surgical expertise among urologists are the important confounding factors responsible for this paradigm shift. Shock wave lithotripsy (SWL) and ureteroscopy (URS) for ureteric stones, and SWL, percutaneous nephrolithotomy (PNL) and retrograde intrarenal surgery (RIRS) for kidney stones are the less invasive treatment options as compared to open surgery. RIRS, in particular, has been increasingly preferred over other techniques in recent years due to a lower complication rate as compared with PNL and a greater stone-free rate as compared with ESWL. Along with technological progress, RIRS has been an effective treatment option for stones below 20mm in size and for selected cases.1-4

This study was performed in accordance with the principles of Helsinki Declaration and was approved by the Clinical Research Ethics Committee of Ankara City Hospital on December 12, 2019. (approval no: E1-19-39).

Between January 2013 and November 2018, 842 surgeries were performed in our clinic. After excluding the patients whose data was incomplete, retrospective analysis of 706 cases where RIRS procedures were performed were included in the study. The cases where diagnostic ureterorenoscopy or only rigid ureterorenoscopy was performed were excluded. Before the surgical procedure, medical history, physical examination, complete blood count, full biochemistry, urine analysis and culture, serologic evaluation and coagulation tests were done. All the patients had undergone imaging studies such as kidney-ureter-bladder radiography, urinary ultrasonography and non-contrast abdominopelvic computed tomography. Appropriate antibiotic treatment had been provided to the patients if urine culture was positive before the surgical procedure. Additionally, intravenous 2g Cefazolin Sodium prophylaxis had been administered to all patients within one hour preoperatively; however, additional antibiotic treatment was not administered to patients who did not have infective complications in the postoperative period.

Patients who underwent surgical procedure were evaluated prior to the operation by their demographic features, which included medical history, age, cumulative stone burden, stone density, number of stones, localisation of stone, urinary system infection, history of previous stone surgery, existence of congenital renal anomaly and solitary kidney. Additionally, the patients were evaluated perioperatively and postoperatively with factors such as duration of operation, duration of postoperative hospitalisation, JJ stent duration, presence of postoperative residual stone, existence of asymptomatic residual stone less than 3 mm and success rate. The patients underwent non-contrast abdominopelvic computed tomography to evaluate cumulative stone burden, stone density, number of stones, and localisation of the stone. The cumulative stone burden was described as the two-dimensional area obtained by multiplying the longest diameter of the stone to the vertical diameter of the stone. The burden was added in the presence of multiple stones.

Retrograde intrarenal surgery was performed under general anaesthesia in dorsal lithotomy position. Semi-rigid URS was initially performed in order to dilate the ureteric orifice and the ureter. After the URS and placement of a guidewire, a 9.5-11f ureteral access sheath, was introduced into the ureteral lumen. If the URS was not successful, a JJ stent was left in place and RIRS was postponed for two weeks. A 7.5 Ch flexible ureterorenoscope (Flex X2, Karl Storz GmbH, Tuttlingen Germany) and Sphinx 30 and 30 watts Sphinx Jr HoYAG laser generators (Lisa Laser Products, Katlenburg-Lindau, Germany) with 200-365μm fibres were used for renoscopy and lithotripsy, respectively. While a JJ stent was left in place only when necessary, a urethral foley catheter was placed at the end of each procedure. The correct placement of JJ stent was confirmed with a KUB film on the first day after the surgery. The treatment outcome was evaluated by a KUB film and non-contrast CT scan at the end of the first month after the procedure. Success was defined as absence of any residual stones or fragments >3mm in an asymptomatic patient.

Continuous and categorical variables were evaluated with Mann-Whitney U test and Chi-square tests, respectively. Univariable and multivariable logistic regression analyses were used for identification of independent risk factors associated with intraoperative and postoperative complications. Statistical significance was determined as p <0.05 for all analyses. 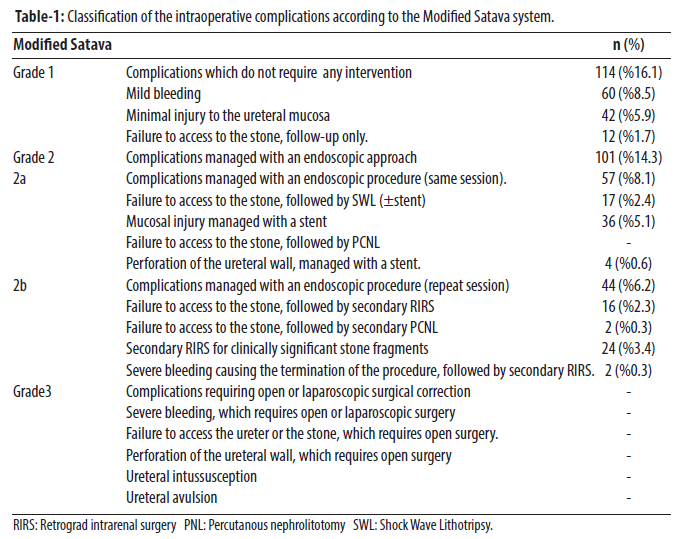 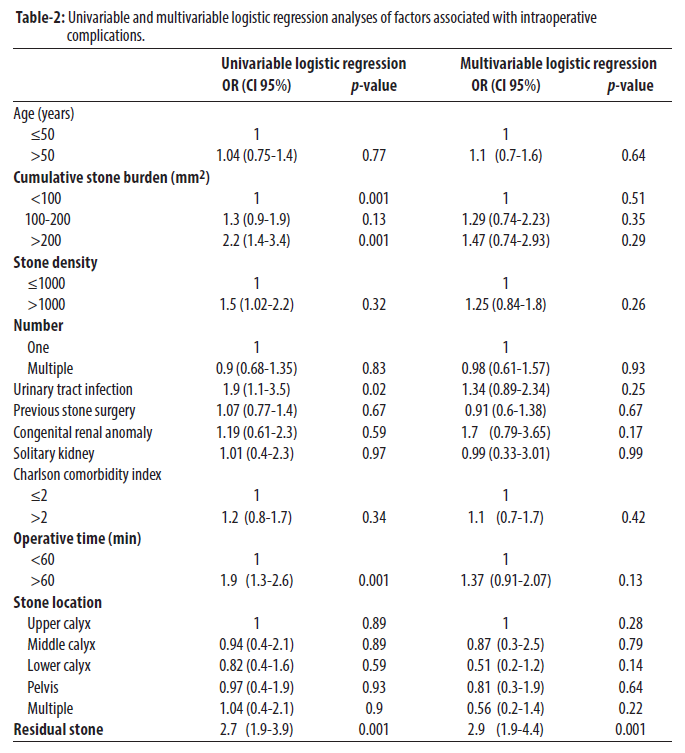 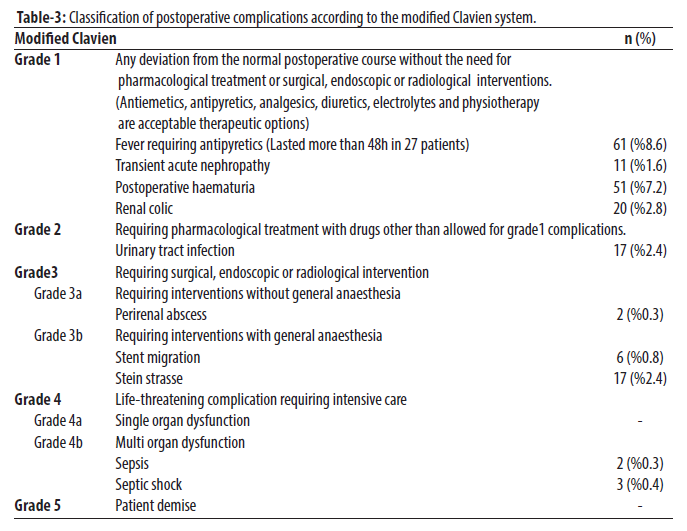 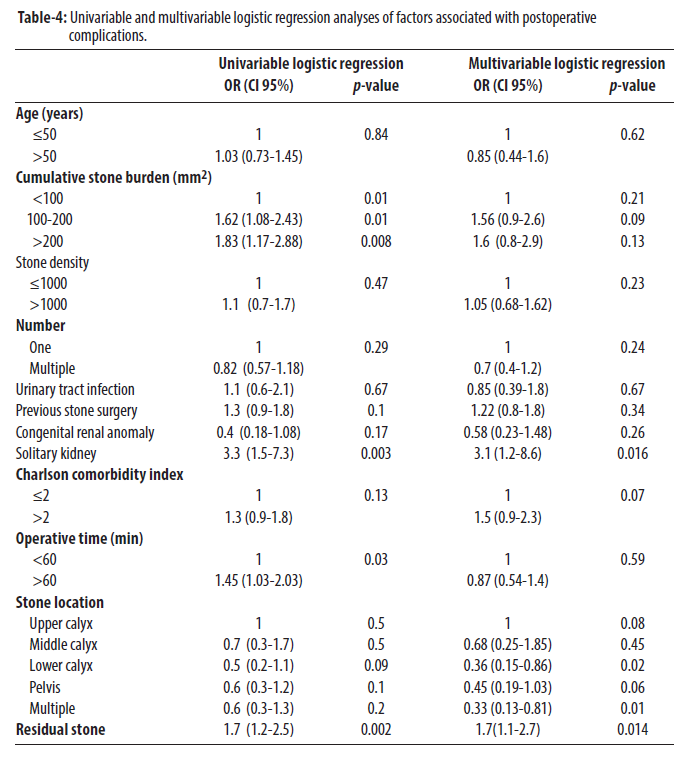 There were 27 patients with solitary kidney, out of which the stone could not be reached in five, three had haematuria, one had haematuria in addition to unreachable stone, and one had a stone pathway. The patients whose stones could not be reached were treated by ESWL. Haematuria regressed spontaneously within a few days. One patient with a stone pathway was treated with ureterorenoscopy because of his symptoms. The mean length of hospital stay (1.6 ± 2.2 days) in patients with solitary kidneys was statistically significantly longer than those with bilateral kidneys (3.4 ± 4.6 days) (p=0.0001).

European Association of Urology recommends SWL as the first-line of treatment for renal stones smaller than 20 mm. Retrograde intrarenal surgery is alternatively recommended for this group of stones based on the lower need for retreatment and rapid achievement of stone-free status with this technique, as compared to SWL. PNL is the first-line treatment for kidney stones larger than 20mm, for which RIRS is also recommended if the characteristics of the patient or the stone are not favourable for PNL.9 The unfulfilled need for effective treatment modalities with minimal morbidity motivated the invention of novel techniques like RIRS, as alternatives for SWL and PNL. Although RIRS exhibits a high level of efficacy together with a very good safety profile, serious complications such as bleeding and sepsis can still be observed.6

The limitations of our study are: its retrospective design, lack of long-term follow-up with regard to the evaluation of possible late complications (i.e. ureteral stricture), the heterogeneity in imaging methods for evaluation of treatment outcome and lack of knowledge about the composition of the stones. Despite these limitations, there are a limited number of studies in the literature, which focus on detailed evaluation of RIRS complications.

Disclaimer: The abstract of this study was presented in the 13th Biennial Congress of Turkish Society of Endourology, Antalya/Turkey.

11.    Bozkurt OF, Resorlu B,Yildiz Y, Can CE, Unsal A. Retrograde intrarenal surgery versus percutaneous nephrolithotomy in the management of lower-pole renal stones with a diameter of 15 to 20 mm. J Endourol 2011; 25: 1131–5.