Objective: To assess the safety and effectiveness of peripheral nerve blocks using ultrasound.

Methods: The retrospective study was conducted at the Aga Khan University Hospital, Karachi, and comprised data of all patients who received peripheral nerve blocks as part of anaesthesia care between January 2015 and January 2017. The data included outcomes of peripheral nerve block effectiveness, complications and limb conditions after the block.

Peripheral nerve block effectiveness was assessed by monitoring pain scores at rest and on movement, and the requirement of co-analgesia. Complications, like numbness, motor block, metallic taste, hypotension and respiratory depression, were also assessed. Data was analysed using SPSS 19.

Results: There were 299 patients who received ultrasound-guided peripheral nerve blocks. The overall mean age was 44.57±16.64 years. Of the total, 140 (47%) received transversus abdominis plane block, followed by supraclavicular block 49(16.7%). The most common complication in the recovery room was numbness 19 (6.2%). Overall, 70% patients remained pain-free, while 16% had moderate pain on movement 12 hours postoperatively.

Conclusion: Ultrasound-guided regional anaesthesia was found to provide effective analgesia during and after surgery. Nerve blocks proved to be safe when used with ultrasound.

Peripheral nerve blocks (PNB) provide effective analgesia to the areas of the body innervated by individual plexuses or single nerves. These nerve can be blocked by local anaesthetics using various techniques.1 For a successful PNB, the key requirement is an optimal distribution of local anaesthetic solution in the proximity of nerve structures. Accurately-performed PNBs have negligible effects on cardiovascular and respiratory systems. Different techniques have been used in clinical practice to guide local anaesthesia (LA) injections, ranging from nerve localisation by anatomical landmarks to nerve stimulation and ultrasound guidance. In recent years, ultrasound-guided regional anaesthesia (UGRA) has become an integral part of anaesthesia and has gained popularity among anaesthesiologists.2

UGRA has the benefits of directly visualising the target nerve and surrounding tissues,3 improved  accuracy during the injection of anaesthetic solutions,4 requirement of smaller volumes of local  anaesthetic solutions to achieve the desired effect, thereby increasing overall success rates5 with more rapid block onset times.6 This has resulted in the safety of patients along with improved pain control, decreased complications, reduced length of stay and cost of hospitalisation.4 Though it has been documented that the complications associated with  UGRA are extremely rare,2 studies have shown a range of complications, like the onset of early complications such as erythema and haematoma-formation or oedema overlying the block placement site, minor neurological injuries, such as numbness, tingling, pain or altered sensation, local anaesthetic systemic toxicity, nausea, vomiting, block failure, pneumothorax and hemi-diaphragmatic paresis to late complications, like permanent neurological deficit, infection and myalgia.1,7

Even in developed countries where point-of-care training structure is mandatory, there are 15% programmes that do not use ultrasound for PNB.4 Even though the evidence of UGRA utilisation is growing, literature in developing countries is limited, and no data is available from Pakistan. The use of ultrasound is becoming popular in the country, but due to limited resources and training, this facility is still underutilised. Department of Anaesthesiology at the Aga Khan University Hospital (AKUH) started to use ultrasound for PNB since January 2013. The current study was planned as an audit to assess the safety and effectiveness of PNB using ultrasound.

The retrospective study was conducted at the AKUH, Karachi, and comprised data of all patients who received PNB between January 2015 and January 2017. After approval from the institutional ethics review committee, data was collected from the standard form which was designed when UGRA started at the department to follow the patients for post-operative complications associated with PNB. Data of those patients requiring postoperative intensive care unit (ICU) admission was excluded.

The standard form consisted of two parts. The first part contained data obtained at the time of block placement and was to be filled by the primary anaesthesiologist. It included the demographics of the patient, indications of PNB, surgical procedure, type of block performed, type of needle used, method of nerve localisation, local anaesthetic used and its dose, number of attempts for PNB, block-related complications that could occur during placement, as well as the use of co-analgesia, if prescribed. The second part was filled postoperatively by the pain nurse of the Acute Pain Management Service (APS) team. This portion had data on the outcomes of PNB effectiveness, possible postoperative complications and limb assessment after the block. Safety of the blocks was assessed by monitoring complications, skin condition, sensory score, motor block score and sedation score immediately, at 6-hour and 12-hour postoperatively. Effectiveness of PNB was assessed by monitoring pain control, including both static and dynamic pain scores, at various time intervals and the requirement of analgesia during the surgical procedure. Pain was assessed using visual analogue scale (VAS) at rest and on movement immediately in the recovery room, followed by 6 hours and 12 hours postoperatively. It was scored as 0 = no pain, 1-3 = mild, 4-7 = moderate and 8-10 = severe pain.8

Data was analysed using SPSS 19. Qualitative characteristics were presented as frequencies and percentages, while quantitative variables were presented as mean and standard deviation. P<0.05 was considered statistically significant. 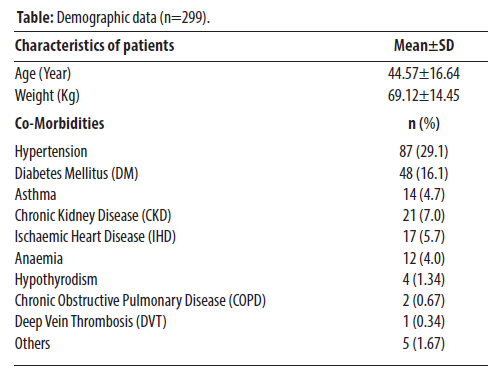 Of the total, 99.85% blocks were performed by consultant anaesthesiologists.

In 275 (92%) patients the blocks were performed for the purpose of analgesia. In only 24 (8%) patients it was used solely for anaesthesia. The methods used for nerve localisation were mainly ultrasound-guided alone 275 (92%), 20 (6.7%) by both nerve stimulation and ultrasound, 3 (1%) through anatomical landmarks and 1 (0.3%) by nerve localization technique. 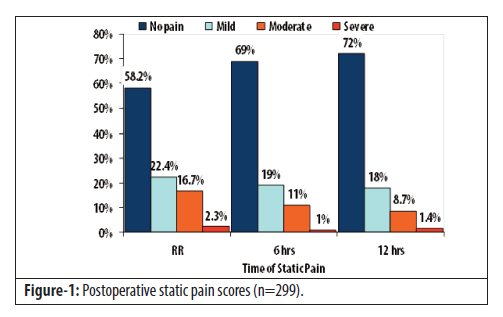 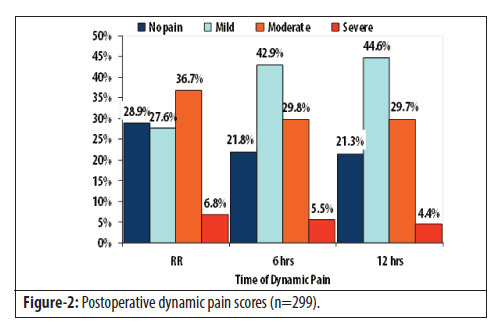 There were 10 (3.2%) patients who had some degree of weakness and motor block at 12 hours postoperatively. These patients were monitored further for another 24 hours after which they showed complete resolution of the symptoms with no motor or sensory block.

The use of peripheral nerve blocks under ultrasound guidance has increased over the past decade. It offers several advantages and benefits, including increased success rate, improved pain control, decreased complications, and a reduced length of stay because of better localisation of the anatomic landmarks by direct visualisation of anatomy, avoidance of nearby vasculature puncture or trauma, and improved allocation of anaesthetic solutions, thereby improving patient safety.1,2

Burckitt et al. showed that 84% of the participants had used nerve stimulation to localise nerves, 16% had ultrasound and nerve stimulation both, and in no case ultrasound alone was used.9 This contrast from the current study is perhaps due to the fact that anaesthesiologists at AKUH are taught regional anaesthesia solely on ultraound that is why there is variation among different anaesthesiologists regarding the use of ultrasound-guided nerve block and peripheral nerve stimulator at the same time. However, at a place where the utility of ultrasound facility is quite primitive, the learning curve could have been better if AKU had used ultraound along with peripheral nerve stimulator for more accurate results and better pain control.

TAP block was the most frequent type in the current study, followed by supraclavicular and interscalene block. Amini et al. demonstrated that the most common type of nerve block performed by the physicians with expertise in ultrasound-guided nerve blocks were the forearm nerve blocks (ulnar, median, or radial nerve blocks) and attributed it to the indiction of use i.e., pain secondary to the fractures as the most common presentation in the emergency department.4 Although our findings are in line with literature regarding supraclavicular nerve blocks (18.7% vs 19%), there is a serious difference in interscalene (33%) and other nerve blocks.4 The reason of TAP block being the commonest PNB procedure in the current study could be that when UGRA started at AKU, this block was thought to be the easiest to be performed. For the beginers to achieve a linear learning curve at the start of any new facilty, this seemed to be the easiest and the safest block with almost no complications.

The effectiveness of pain relief was assessed by VAS in the current study and showed that scores at rest were significantly lower in patients receiving PNB in the recovery room till 12 hours. Only 1.4% patients had pain score of 7/10 at rest and 4.4% patients had dynamic pain. These patients were managed with intravenous (IV) narcotics, like morphine or tramadol, as rescue analgesia and were followed till the pain got relieved. In the current study, 11-19% patients had mild to moderate pain in the first 6 hrs with majority having no pain at all, while 6.6% patients required additional analgesia or sedation in an earlier study’s ultrasound group compared to the conventional group where this requirement was 13.2%.10 Moyo et al. has also shown that patients experienced mild to moderate pain, with mean pain scores of 3.7 at rest and 4.8 during movement in the first 4 hours post-TAP block.11

Only 1.7% patients had numbness till 12 hours in the current study. Even in United States, a study showed that 89% of the institutions did not find any complications with ultrasound-guided nerve blocks, while the most common complication was haematoma at the site of the nerve block in 7% patients.4 Likewise, another study also showed that the incidence of vessel injury / haematoma and nerve injury was more in the conventional group than the ultrasound group in patients undergoing upper limb surgeries under UGRA.5 This variation could be due to the fact that blocks performed in that study were only for upper limb surgeries and included only supraclavicular nerve block. The current study does not report the exact number of total blocks performed during the study period because failed blocks were neither registered nor documented anywhere by the primary anaesthesiologist. The current results show that the use of ultrasound for PNB has improved safety and effectiveness with very few complications. We therefore recommend the routine use of ultrasound while performing PNB to improve the effectiveness and accuracy and to reduce complications.

The limitations of the current study remains its single-centre orientation. As the use of UGRA is relatively new, hence the conduct of different types of regional anesthesia was also limited. With advancements in the use of ultrasound technique, there is a need of collaborative research work and development of guidelines that could help formulate practice standards for the use of ultrasound-guided nerve blocks with or without nerve stimulation technique.

Complications associated with ultrasound-guided nerve blocks were found to be few, and the effectiveness of these blocks seemed to be nearly 70% when ultrasound was used.