Maternal depression and its correlates: A longitudinal study

Objective: To estimate the burden of antenatal and postpartum depression, and to explore possible predictors of perinatal depression.

Method: The longitudinal study was conducted at the Department of Obstetrics and Gynaecology, Shifa International Hospital and its Community Healthcare centre in Islamabad, Pakistan, from October 2018 to May 2019, and comprised women in their third trimester of pregnancy. Socioeconomic and obstetrical history was recorded on a proforma, and the Edinburgh Postnatal Depression Scale was used for screening of depression. Data was analysed using SPSS version 23.

Results: Of the 200 women, 71(35.5%) were primigravida and 129(64.5%) were multigravida. The overall mean age was 27.1±5.08 years. Further, 64(32%) women belonged to the low-income group, 99(49.5%) middle-income and 37(18.5%) to upper-income group. Women in postnatal period had higher depression scores than women in antenatal period (p<0.05). Antenatal depression increased the risk of postpartum depression (p<0.05). In women having unplanned pregnancies, or being multigravida, or belonging to middle and lower socioeconomic classes, the chances of perinatal depression were higher (p<0.05).

Conclusion: Antenatal depression was strongly associated with postpartum depression, indicating that the former was a significant predictor of the latter. Social class and parity were also found to be directly linked with perinatal depression.

Pregnancy is a time of increased susceptibility to anxiety and depression. Perinatal depression (PND) is defined as depression or anxiety occurring in the antenatal period, like antenatal depression (AND) or after delivery which is postpartum depression (PPD). Studies show that 1 in 7 women have PND, indicating that it is a common complication in pregnancy.1 Depressive illness was predicted to become the second leading cause of disability worldwide by 2020.2 Worldwide studies have documented the prevalence rates of AND and PPD 12-20%, with a commonly reported estimate of 13%.3,4

Like other depressive disorders, PND presents with state of low mood, inactivity, fatigue, reduced sense of wellbeing/sadness, sleep disturbances, reduced appetite, disconcertment, disorientation or suicidal thinking.7 However, unlike other depressive disorders, the critical timing of PND brings with itself additional adverse effects, including problems with mother-child attachment and interaction8 and marital distress,9 which lead to adverse cognitive and behavioural effects in the child.10 Studies show that PPD can lead to problems in parenting which can create developmental and emotional challenges for a young child.11 Research has identified maternal depression as one of the causes for a delay in neurological, cognitive, motor and psychological development of a child, in addition to putting the child at a higher risk for distressed and avoidance behaviour.12

Mental health deserves adequate recognition and awareness which is presently not seen, especially in developing countries. The importance of AND has been largely under-recognised, with the focus of research and treatment programmes being on PPD. This current study was planned to focus on screening for both AND and PPD, and to explore PPD predictors.

The longitudinal study was conducted at the Department of Obstetrics and Gynaecology, Shifa International Hospital and its Community Healthcare Centre in Nurpur Shahan, Islamabad, Pakistan, from October 2018 to May 2019. After taking approval from the institutional ethics review board, the sample size was calculated using the World Health Organisation (WHO) calculator13 with 95% confidence level, 5% absolute precision and population size 600 which was the estimated number of pregnant women attending the clinic in 6 months. The sample was raised using non-probability consecutive sampling technique from among pregnant women after 28 weeks of gestation receiving antenatal care. Those critically ill having psychological disorders or having medical co-morbidity needing medication were excluded.

Data was collected after taking written informed consent from the participants. Information regarding socio-demographic characteristics, past obstetrical history and planned/unplanned conception was noted. Women were screened on two occasions; first in the third trimester of pregnancy, and then at two weeks postpartum when they returned for a follow-up visit. Those who did not turn up for follow-up were contacted over the telephone and data was collected from them.

The screening was done by the 10-item Edinburgh Postnatal Depression Scale (EPDS) with a cut-off 13. Studies revealed that this cut-off yields a sensitivity of 92% and specificity of 95.6% with positive predictive value (PPV) of 77% and negative predictive value (NPV) of 99.3 % for Asian women.14 EPDS is a reliable screening tool that has also been validated for Pakistani population.15 Originally created and validated for screening of PPD,16 EPDS has also been found to be effective for the screening of AND.17

Data was analysed using SPSS version 23. Descriptive and inferential statistics were applied. Association between depression scores and other variables was determined using chi-square test and independent samples t-test after applying the Kolmogorov- Smirnov test of normality. P<0.05 was considered statistically significant. Linear regression analysis was performed to determine the association between AND and PPD scores. 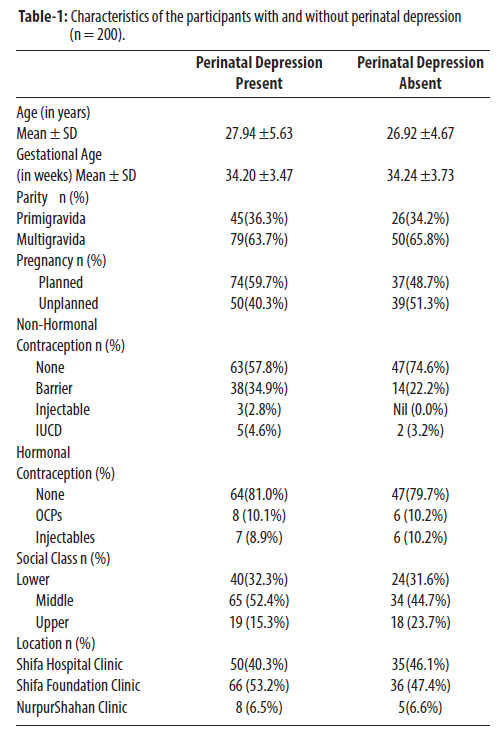 Comparison between AND and PPD scores in terms of various socio-demographic variables showed a mixed pattern of significance (Table 3). 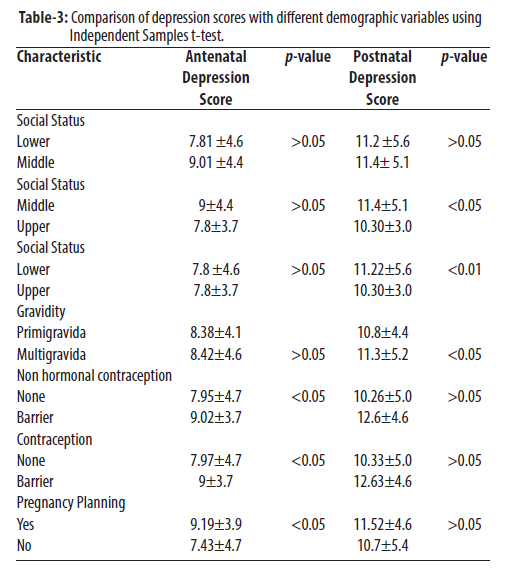 The overall prevalence of PND in the current study was 38.5%. In comparison the prevalence estimates of depression in pregnancy from a meta-analysis ranged from 6.5% to 12.9%,18 indicating that the frequency of PND is increasing. This is probably due to increased stresses of daily life nowadays. The alarming rise in prevalence of PND is a matter of great concern as depression during pregnancy not only affects the wellbeing of the mother, but has also been linked to adverse foetal outcome regarding birth-weight and health of the neonate.19

Estimates of AND burden vary widely. A systemic review revealed combined estimates of point prevalence of depression in pregnancy ranging from 8.5% to 11%.20 This is consistent with the current study in which it was 12.5%. Comparing the findings of various studies carried out in Pakistan on depression in pregnancy, a regional variation was found in the prevalence of AND with 48% in northern areas21 and 62% in rural areas of Sindh.22 This high prevalence has been attributed to difference in the socioeconomic status of the families and overall poor maternal health.  However, 18% pregnant women were found to be depressed as reported in a study from an urban area of Pakistan.23

In the current study, 36.5% pregnant women were screened positive for PPD which is consistent with literature from the United Arab Emirates.24 In a Turkish study, PPD prevalence was 24% and it was found to be related with previous history of anxiety, psychological health issues, poor socioeconomic status, unwanted conception, marital life problems and not being satisfied to be just a house-maker.25 The current study also showed significant association of PPD with low socioeconomic status and of AND with unplanned pregnancies. PPD was found to be more in lower and middle class families, as has also been reported in other studies.21,26

Difficulties resulting from poor income and access to free medical care affect the occurrence of PND. Pakistani women being accustomed to particular ethnic practices and empowerment by spouse’s family may be an important factor affecting women’s physical and psychological wellbeing.16 Lower education of women in Pakistan and financial dependance has been linked to poor medical care and delay in seeking medical help. The current study, however, did not involve analysis of such difficulties related to PND. Further research is needed to explore this variable.

Most of the published data documents first pregnancy as a better predictor of PPD, and higher prevalence of PPD is reported in primiparas who experience pregnancy and delivery for the first time.23,27 On the contrary, the current study showed a higher incidence of PPD in multigravida compared to primigravida. This finding is, however, supported by the studies done in Italy and the Quetta city of Pakistan.28,29 Childcare stress added with other variables, like poor social support, low income, lack of confidence, pregnancy-related concerns, lack of access to healthcare system and domestic violence, may contribute to this in the Pakistani context.6

Exploring the reasons for high PPD in the current study, the presence of AND in current pregnancy was found to strongly correlate with PPD. This finding is consistent with a study done in Australia.30 It indicates that antenatal emotional issues can have a major effect on PPD symptoms. It is well documented that this association of antenatal anxiety or depression as well as inadequate partner and social support plays a vital role in PPD occurrence.6,31 These findings emphasise that timely and effective recognition of emotional problems is principally meaningful, especially when there is a manifested link between AND and the risk of pregnancy complications, such as prematurity and restricted foetal growth.32 Anxiety and depression during the antenatal period can adversely affect neurodevelopment of the foetus, causing physical and learning disabilities.33 Depression in pregnancy also adversely affects the mental health of women. A study demonstrated that pregnant women who were depressed or showed signs of anxiety were approximately 6-fold more prone to having thoughts related to suicide, and the likelihood to attempt a suicide also increases 4-fold compared to women without depression.34

It is therefore recommended to incorporate proper assessment of symptoms of depression into routine antenatal care practice. Targeted interventions for AND and PPD may reduce both the severity and incidence of PND. Focusing on empowering women through education and financial independence should also be a priority. Last, but not least, limiting the family size can help to avoid unplanned pregnancies and to achieve better mental and physical health of the women.

AND was found to be a significant predictor of PPD. Social class, parity and unplanned pregnancy were directly linked with prevalence of PPD. The stress of pre-existing socioeconomic conditions and the burden of repeated pregnancies along with a history of AND were found to be the key factors influencing PPD emergence.

10.    Grace SL, Evindar A, Stewart DE. The effect of postpartum depression on child cognitive development and behavior: a review and critical analysis of the literature. Arch Womens Ment Health 2003; 6: 263-74.

15.    Rahman A. Screening for postnatal depression in the developing world: a comparison of the WHO Self-Reporting Questionnaire (SRQ-20) and the Edinburgh Postnatal Depression Screen (EPDS). J Pak Psychiatr Soc 2005; 2: 69-72.