Knowledge and societal perceptions regarding autopsy amongst different educational backgrounds in Karachi, Pakistan

Objective: To find out awareness levels about legislation/authorisation and objectives of autopsy among common people, and to assess correlation between opinions and academic levels.

Methods: The cross-sectional questionnaire-based study was conducted from March 2019 to September 2019 after approval from Ziauddin University, Karachi, and comprised adult subjects from the community having various academic backgrounds. Data was collected on their knowledge, perceptions and concerns regarding autopsy. Data was analysed using SPSS 20.

Conclusion: Although majority of the subjects had a positive perception of autopsy, in-depth questioning revealed a clear lack of correct knowledge on the matter.

The word ‘autopsy’ has Greek roots meaning “seeing with one’s own eyes”.1 The history of autopsy proper dates back to 367BC, during the time of King Ptolemy I Soter of Egypt based in Alexandria.2 Back then, primitive dissections were conducted on executed criminals in an attempt to learn more about human structures and functioning. Since then, autopsy has been refined and practised for the study of the human body and for investigation into disease processes. The medico-legal autopsy is defined as a postmortem examination performed with the intent of determining the cause and manner of death3 including the manner of death (MOD) and time of death (TOD), where necessary and possible.4 It plays an essential role in aiding the justice system by providing facts that can exonerate the innocent and reveal the guilty and in identifying individuals in mass disasters, like bomb explosions.

Despite the importance of postmortem examination, autopsy rates have been falling around the world since the early 1970s.5 A 2012 study from Indonesia, a country with similar medico-legal system as Pakistan’s, revealed autopsy rates <23% in unnatural deaths.6 This may be due to the fact that premortem diagnostic capabilities have vastly improved, eliminating the need for cause-of-death (COD) investigations after the demise of a person.5 This decline has been most noticeable in wealthy nations, where hospital laboratory and imaging facilities, techniques of criminal deduction, and national citizen databases are highly advanced and available to individuals of every strata.7 In a low and middle income country (LMIC) like Pakistan8 most people are unable to afford basic healthcare and remain unaware of their rights to have deaths investigated. It would therefore be prudent to assume that autopsies play a greater role in establishing COD in medical cases and of providing factual evidence in criminal deaths. However, the rates of autopsy in Pakistan remain meagre despite a death rate of 6.9 per 10009 and high crime index.10 The last mortality statistics collected for Karachi were in 2001.11 Moreover, there have been no further statistical surveys for the local districts, or, if they have been done, they are not available on public records.

The medico-legal system in Pakistan operates via a modified continental framework, i.e., the initiation of investigations into death is done primarily by the police, or by magistrates in cases of custodial deaths. These investigations are ordered under section 174 of the Criminal Procedure Code (CrPC) of Pakistan when the relevant authority encounters sudden, suspicious or unexplained deaths, or deaths due to criminal intent.

As of 2015, the literacy rate in Pakistan is 57.9%12, with a range of educational levels found among the adult population; from primary education to post-doctoral, as well as just vocational training and seminary education. The major religion in Pakistan is Islam with 96.4% followers, with the remaining 3.6% practising Christianity, Hinduism, Sikhism and others.12

The current study was planned to find out the awareness levels about legislation/authorisation and objectives of autopsy among the general public, and to see if opinions are correlated with academic levels.

The cross-sectional questionnaire-based study was conducted from March to September 2019 at Ziauddin University. After approval from the ethics review committee of Ziauddin University, Karachi, the sample size was calculated at 95% confidence interval (CI) and 5% margin of error which was deemed most appropriate in line with literature.13,14 The sample was raised using non-probability convenience sampling technique from the community while focussing on adults regardless of age, gender and occupation with levels of education. Those who refused to participate were excluded, and so were those employed or involved with any forensic-related field. Data was collected after informed consent using a pre-designed questionnaire prepared in both English and Urdu languages for maximum participation. The questionnaire gathered data about knowledge, awareness and perceptions of individuals on the issue of autopsy.

The preamble of the questionnaire contained brief information about the study, followed by two sections. The first section was designed to assess an individual’s existing knowledge about autopsy and its related procedures, including questions on consent and financial expenses. The second part focussed on the perspective and concerns of the participants regarding autopsy of relatives. For several questions, >5 options were given.

The questionnaire was pre-tested before being distributed, and adjustments were made to incorporate the pre-test feedback. Most questionnaires were self-administered online via Google Forms, while a few were conducted by the authors during face-to-face interviews and their answers were subsequently recorded on the forms. 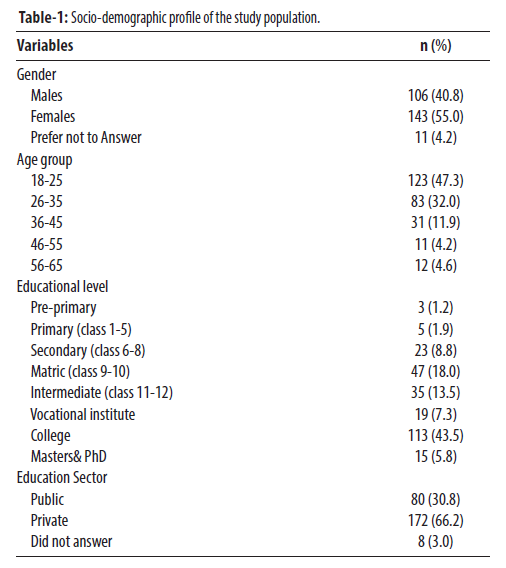 When asked if they have had any personal experience of autopsy in case of a relative’s death etc., 26(10.3%) replied in the affirmative. 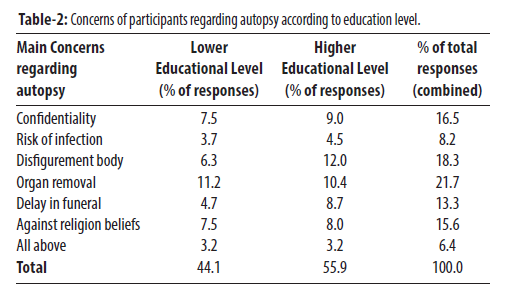 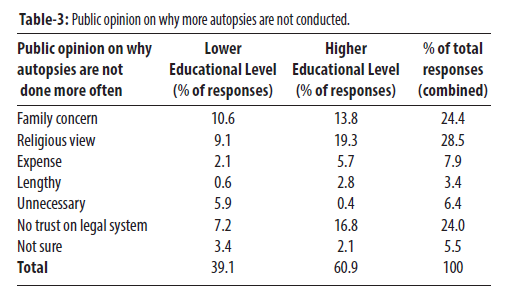 The majority in the current study, regardless of their academic background, were not fully aware of the significance of post-mortem. The results are in accordance with literature.13,15 A 2012 study reported that 101 bodies were exhumed in order to determine cause of death in criminal cases, and 87% of them had not undergone autopsy before burial.16 In the context of such findings, the current study highlighted the importance of primary autopsies, especially in suspicious deaths.

The most common reason for avoiding autopsies in both low and high educational groups was the fear of body disfigurement and removal of organs. Muslims believe the whole body, with all parts intact, should be buried.17 To have tissue removed from a dead body for the purpose of investigation is still a topic of debate amongst religious scholars, especially due to the strong belief that the soul still feels physical pain post-death.18-20 It is imperative that eminent Muslim scholars be educated about the importance of autopsy and the technicalities of the procedures. A recent paper from Turkey surveyed the knowledge and opinions of various local religious scholars and prayer-leaders, and concluded that involving them in educating society about the religious aspects of autopsy could help alleviate fears and disinformation amongst the public.21 However, disfigurement of the body and whole organ removal need not be necessary anymore, especially with the introduction of minimally-invasive autopsy techniques. Studies have shown that this technique holds greater acceptability amongst the public and therefore may improve the outlook people have towards autopsies.22 Furthermore, the public holds a misconception about organ removal and needs to be reassured of the fact that organs cannot be taken for transplantation from dead bodies as they no longer remain viable after the cessation of vital functions.

Another notable concern is the wish for a swift and dignified burial for the deceased, which may not always be possible if a postmortem investigation is to be conducted since paperwork and procedure takes time. This concern has been echoed especially by parents of neonates and babies who preferred speedy burials to ease the bereavement process.23,24

In a study in Nigeria, public members stated “lack of feedback of results” as a reason for disinclination towards autopsy.25 This could be interpreted as either an incompetency on the part of the medico-legal official conducting the procedure, or a disinclination for true results of the COD to be shared for fear of backlash towards the doctors who were treating the patients premortem.  A 2016 study revealed medical students were largely not keen on pursuing the field.26 When doctors themselves are not inclined, they cannot advise the public adequately when an autopsy is indicated. A 2015 review27 stated that the discrepancies between antemortem and postmortem diagnoses, especially CODs, should not be a source of discouragement or fear of litigation, but rather encourage clinicians and practitioners to use these findings as a quality assurance tool to improve diagnosis and treatment protocols for future patients.

Although majority of the subjects had a positive perception of autopsy, in-depth questioning revealed a clear lack of correct knowledge on the matter. The findings are important as they shed light on the public’s opinion regarding autopsies and the many reasons for its decline in a city where deaths due to unknown causes are frequently un-investigated. Regardless of educational background, there is a need for greater public awareness into the procedures and benefits of autopsies.