Objective: To identify the prevalence and factors related to obesity and fast food consumption among university students.

Conclusion: The prevalence of fast food consumption among university students was found to be high.

Fast food refers to any kind of food that is produced in standardised large amounts in very short time to be quickly offered to people who do not have the time to cook.1 The preparation of fast food meals tend to prioritise the speed of making food over the nutritional value of the food served, given that it is originally designed for commercial resale.2 Evidence suggests that fast food is considered unhealthy compared to home-cooked meals. As such, fast food is found to be rich in fat, sodium, sugar and calories and is found to be poor in fruits, vegetables, whole grains, vitamins and minerals.3 Several studies showed a strong association between fast food consumption and increased body mass index (BMI) which is a parameter used to assess overweight and obesity.4,5 Additionally, a significant relationship between fast food intake and colorectal cancer was reported.6

In the past decades, there has been a drastic increase in the number of fast food restaurants worldwide.7 Eating out of home is becoming common and popular dietary habits among university students, particularly those living away from their family homes, which is a challenging and stressful condition noticeably affecting the trends in food selection.8 The availability of various menu choices, delicious flavour and taste, large portion sizes with reasonable prices, delivery services, and being convenient and satisfying are the factors influencing and encouraging fast food consumption, particularly among the adolescents and youth.4,8 Moreover, fast food meal is substantially served with high-calorie beverages, such as carbonated soft drinks, which adversely affects the value of fast food meal and increases the risk of cardiovascular diseases, incidence of hypertension, obesity, type 2 diabetes and metabolic syndrome.9,10

In Jordan, the exposure to fast food has increased during the past two decades with the openings of fast food outlets. It is reported that females constitute about 25.8% of the Jordanian employees in both public and private sectors11 and 53% of the total number of undergraduate students at Jordanian universities.12 This increased number of women engaged in the workforce or education may have eventually limited the time spent cooking and facilitated the increased demand of fast food. Studies about the level or the prevalence of fast food consumption among Jordanian population in general and among university students in particular are lacking. The current study was planned to identify the prevalence of fast food consumption and its related factors among university students in Jordan.

The cross-sectional study was conducted at Mutah University in the Al-Karak governorate in southern Jordan, from January to April 2019. After approval from the institutional ethics review committee, the sample was raised from among Jordanian undergraduate students aged 19 years and above enrolled with any of the 14 faculties in two principal categories: Health and Scientific faculties comprising Medicine, Nursing, Pharmacy, Sciences, Agriculture, Engineering and Information Technology; and Humanities comprising Business, Sharia, Educational Sciences, Law, Sports Sciences, Social Sciences and Arts. Participants were selected from all these disciplines using randomised sampling technique, with the sample size being proportional to the total number of the students in that faculty.

After taking informed consent, data was collected using an interviewer-administered questionnaire adapted from literature.13 The valid and reliable questionnaire had two parts. The first part contained socio-demographic information, while the second part consisted of questions related to fast food consumption.

In addition, height and the weight of each participant were measured using an electronic scale and a measuring tape in order to calculate BMI. The students were classified based on their calculated BMI value into four categories using the World Health Organisation (WHO) classification:14 Underweight <18.5 kg/m2, Normal weight 18.5-24.9 kg/m2, overweight 25-29.9 kg/m2 and obese ≥30.0 kg/m2.

Regular fast food (RFF) consumption was defined as consuming fast food at least two times per week,13 while the cut-off point for regular physical exercise was 150 minutes / week as defined by the WHO.15 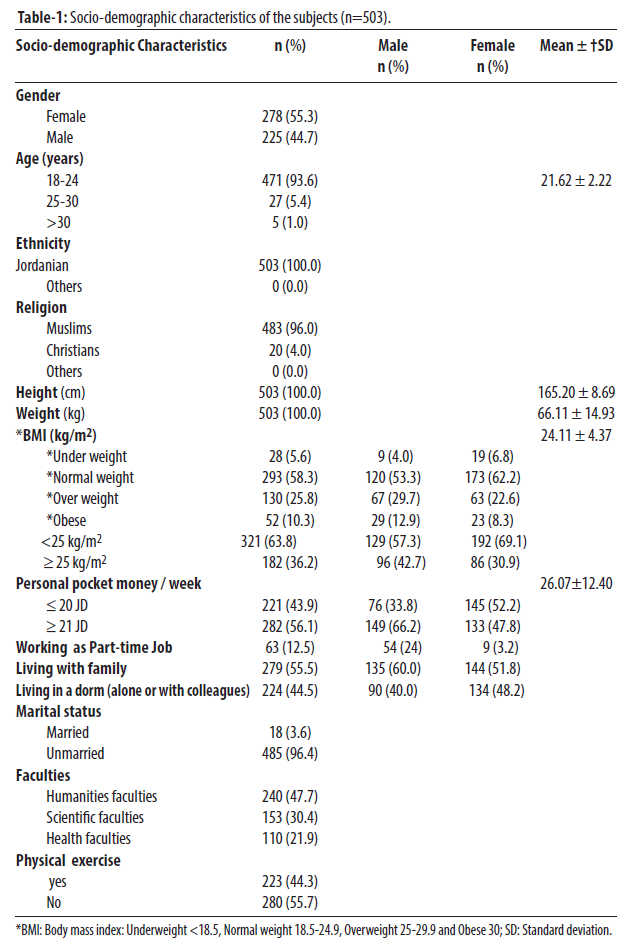 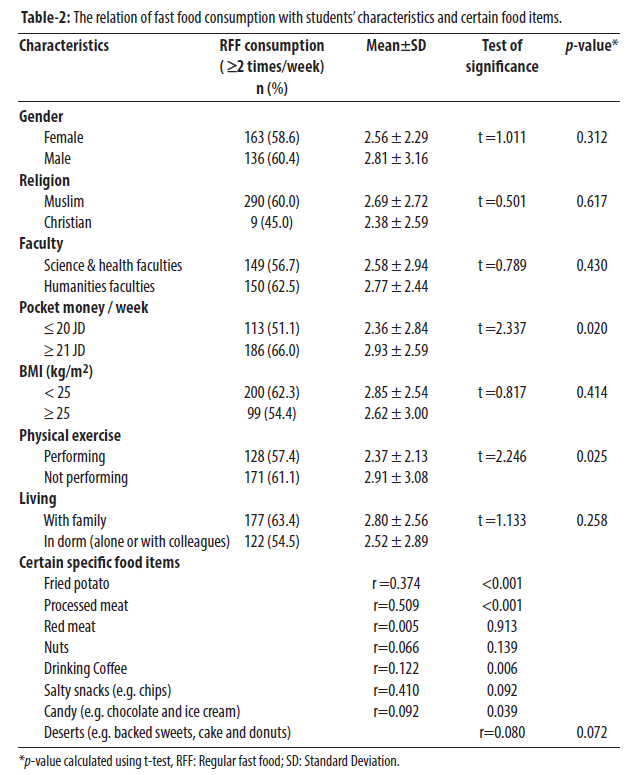 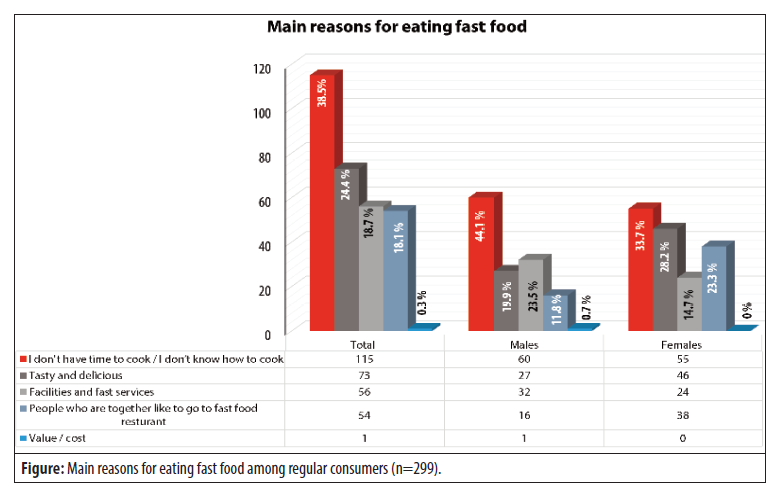 Lunch time was the most preferred time for RFF consumption 210(70.2%); 97(32.4%) students were willing to read the nutrient information; and 211(70.5%) were interested in choosing healthy meals if they were available on the menu (Table 3). 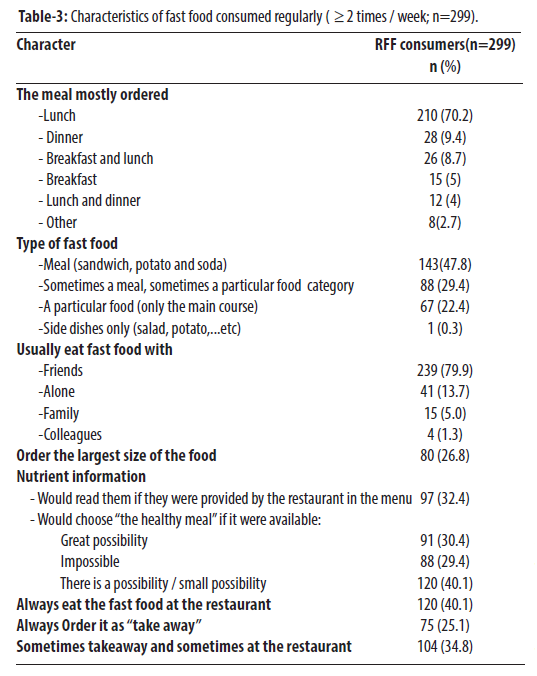 The current study found RFF consumption significantly higher among students not performing physical exercise which may indicate that this group of students is less health-conscious. This is in agreement with a study13 in which respondents less engaged in physical activity reported more RFF consumption. In addition, the present study found RFF consumption to be significantly different based on the students’ weekly pocket money. Literature generally reports increased fast food consumption with increased individual or household income.20 Research also shows that university students spend a high percentage of their pocket money on fast food.8 The current study showed no significant difference in RFF consumption related to BMI which is contradictory to findings in Saudi Arabia5 and Bangladesh.21 Nonetheless, the current finding is consistent with other studies done in Kuwait17 and Saudi Arabia.18 This inconsistency of the reported results might be attributed to various definitions of fast food, and also because frequency might not reflect the size/portion consumed per meal which could be higher among those with greater BMI.

Although the current study found the mean RFF consumption to be higher in males compared to females, but the difference was not significant. Several studies have shown a significant difference in RFF consumption based on gender, with females having lower mean consumption than males.22,23 The current results showed gender differences in terms of the preferences of fast food consumption, like the number of female students who preferred to eat fast food when accompanied by their friends was two times more than their male counterparts. These differences could be culturally driven as more barriers are present and could restrict females attending outdoor places unaccompanied.

The top three reasons for RFF consumption among the study participants were shortage of time (38.5%), palatability and taste (24.4%), and quick services in food preparation (18.7%). Literature shows similar reasons with varying order.16,17,23 This variation might be attributed to different study settings. On the other hand, the least factor mentioned among the current respondents was the cost and price which is contradictory to some studies2,23 but is consistent with the fact that fast food is relatively expensive similar to other costs of everyday life in Jordan.24

Lunch was the most preferred time for fast food consumption, and the finding was similar to other studies.8,16 Lunch time is usually in the middle of the day and studies show that most students usually skip their breakfast due to class pressures.8 Therefore, they are expected to be exposed to fast food outlets more at lunch. Fast food consumption was significantly correlated with certain food items, like fried potato, processed meat, chips and chocolate, which is in line with an earlier study.25 These are probably the most attractive items to be consumed by youth. Finally, 32.4% of the current participants were willing to read nutritional information of the food if it was available and almost two-thirds of them were willing to order a healthy meal if they found it among menu options. Findings from literature show the interest of students to eat healthy when facilitated by the environment in terms of provision of healthy options as well as limiting the availability of unhealthy foods.26

There was a very high prevalence of fast food consumption, including junk food items like fried potato, among university students in Jordan. University students could be a potential target for educational and support strategies designed to improve awareness regarding healthy food options.

Acknowledgement: We are grateful to the Deanship of Scientific Research, and the Deans of all faculties at Mutah University. Medical students who assisted in data-collection were Waha Al-Kassabeh, Saker Sunna, Ru’a Tafesh, Abrar Al-Saraireh and Ghazi Majali.