Occupational trauma in carpentry is common in our society due to lack of awareness on occupational safety and poor availability and adherence towards protective equipment. Given below is an unusual case of a young carpenter who presented in the orthopaedic outpatient department with complaint of difficulty in walking for the last four days. On examination, restricted movement of the hip joint on extension was observed. On further work up in the form of radiological investigations, a long iron nail was discovered as incidental finding in the back in close proximity to the ascending colon and duodenum in the retroperitoneum. Elective laparotomy was performed to remove the  nail, after which the patient improved clinically and his presenting complaints were completely resolved on further follow up. This demonstrates the unusual way in which such a case can present in the outpatient department instead of the emergency department and with symptoms that may prompt one to think of anything but foreign body trauma, emphasising the need for proper history and meticulous relevant clinical examination, as covert foreign body injury can occur to the back, especially in patients involved in such occupations.

Occupational trauma in carpentry is common in our country due to lack of awareness on occupational safety and poor availability and adherence towards protective equipment. The most frequent injury among carpenters is associated with nails and the most frequently involved area of injury is the hand. But there have been reported cases of nail injuries in many different parts of the body including face, chest, back, pelvis and extremities.1-4 Majority of injuries involving retained nails result in trauma confined to the surrounding soft tissues.1 Abdominal trauma due to penetrating back wound is a peculiar kind of trauma. The back is better protected as compared to the anterior abdominal wall because of thick musculature and presence of vertebral column.5 Many patients with penetrating back trauma present with haemodynamic stability and lack of any tenderness away from the wound site.3 The diagnosis of trauma-related injury can easily be missed by the physician if history is not properly probed.2 Physical examination is very important in such patients, as this alone has been found to be accurate in about 72% to 95.2% of the cases.5 Clinical assessment and plain radiography can miss a large number of foreign bodies.6 Examination of penetrating torso injuries is usually based on the site of the wound and its regional anatomy in order to provide accurate diagnosis and appropriate treatment. Recently, selective conservatism approach has gained popularity in such injuries.3 Here, we report our experience with a covert nail injury to the back which went unnoticed for six months after initial trauma. Consent was obtained from the patient to publish his case.

A 28-year-old carpenter presented in the orthopaedic outpatient department of Lahore General Hospital on September 17, 2019, with complaint of difficulty in walking for the last four days. On examination, restricted movement of hip joint on extension was noticed. An X-ray of lumbosacral region AP/LATERAL view was advised which showed a six-inch long iron nail in the back (Figure 1). 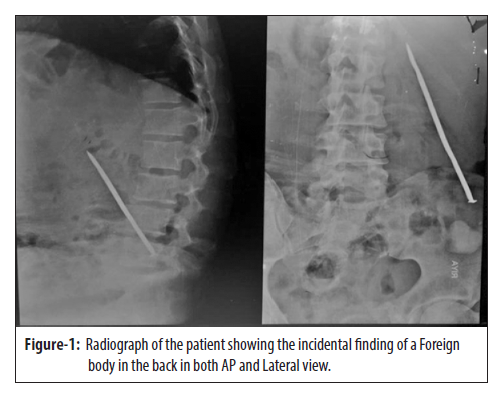 Incidental finding of foreign body was noted as the patient did not remember any trauma or foreign body insertion in the back. However, he had a history of fall from ladder at his workplace six months ago. The patient was then referred to the general surgery where USG and CT of the abdomen without oral contrast were performed. On these investigations, the nail was found to be present in close proximity to ascending colon and duodenum in the retroperitoneum (Figure 2). 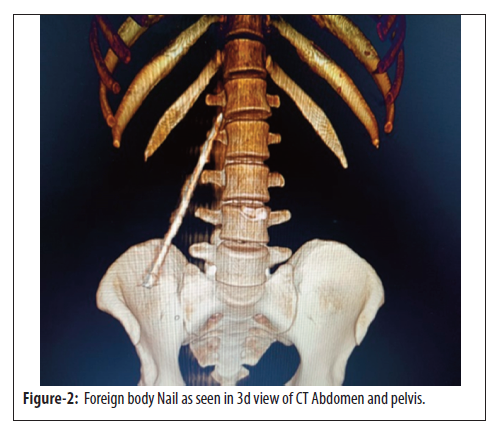 The patient was admitted and his surgery was planned (Figure 3). 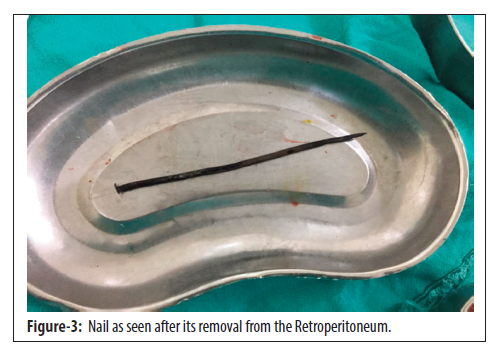 The patient underwent exploratory laparotomy with removal of the nail on the third day after admission. Under aseptic measure, midline incision was made and abdominal cavity was opened. A large nail, about six inches long, was found encapsulated in the retroperitoneal area obliquely lying behind the ascending colon and duodenum. It was not eroding the gut. 20ml of pus was seen in the track of the nail. Haemostasis was secured. Right sided drain was placed in the retroperitoneal space in the cavity where the nail had been lying. The abdomen was closed by layered closure method and the skin was closed with skin stapler. Post operation I/V Ceftriaxone 1 gram was administered twice daily for five days. The drain was removed on the third post-operative day. The patient improved clinically and he was discharged on the fifth day after surgery on oral antibiotics. On follow up after one week, his presenting complaint was completely resolved and marked clinical improvement was seen.

A young patient presenting in the outpatient department of Orthopaedics with the complaint of lower back pain radiating towards both legs may prompt one to think of anything but foreign body injury. These signs and symptoms may cause the physician to think about an array of common chronic spinal anomalies before thinking of such traumatic injury, especially when the patient did not present with a history of any trauma.2 Luckily, for the patient, the injury was incidentally picked up on plain radiograph and he was admitted to the Surgery department from the outpatient department. The cases of such foreign body trauma injuries usually present in the ER, but as proven by our case they can present in the OPD as well. The patients presenting in the OPD are usually stable, while the patients presenting in the ER may be unstable. All cases should be managed according to the Advanced Trauma Life Support (ATLS) guidelines. The patient’s occupation is an important point to be noted in such cases as nail injuries are common in carpenters. The history should be taken in detail as in this case the patient gave a history of fall at work a few months back which might have caused his injury. Physical examination is also essential as it is very important to figure out whether the nail entered the body from skin or from per rectal route.7 A wound or scar would help to diagnose a trauma on the skin.

Radiological investigations are needed to confirm the diagnosis and the commonly used modality is plain radiograph and CT scan,7 which is commonly available in the ER and is performed quickly. But sometimes the foreign body is not radiopaque and may be difficult to find on a CT because it may appear hypodense. For such foreign bodies, it is recommended that MRI should be used.2 However, MRI has its own limitations as it is not usually available in the ER and can cause a delay. An ultrasound can also be used to pick up radiolucent foreign bodies.6 The decision to perform surgery or keep the patient under conservative management should be carefully made. In the ER, the patients who are vitally stable will usually be managed along the conservative lines. Unstable patients are explored. Our case presented in the OPD, and was vitally stable but was symptomatic. The patient was initially managed conservatively so as to avoid the risks of surgery but his pain was not relieved, rather it was increasing progressively and began to hinder his mobility. Hence, an elective exploratory laparotomy was planned and performed. While going through the literature, it can be inferred that there are many ways a foreign body in the retroperitoneum can be managed, based on the patient’s clinical picture.2-5,8-10 Selective conservatism can be applied in the management of this pathology. It means that if the foreign body is not causing any symptoms then it can be left in situ.3 Recently, cases have been reported demonstrating laparoscopic removal of a foreign body from the retroperitoneum when the size of such objects was not very large.8-10 The foreign body in our case was larger in size. In such cases, open surgical treatment is a better option if subjective improvement does not occur after conservative management.3 Occupational injuries are also a public health problems and there is a need to take measures to reduce the occurrence of such incidents. It has been shown that improved standards of training can reduce the incidents of such traumas. There is also a need to implement safety laws and improve policies to create a safe workplace environment.11

Penetrating foreign body injury to the back is can remain hidden for long period of time like in our case, hence a surgeon should always keep his index of suspicion high when dealing with trauma. History is of utmost importance in these cases and should be properly probed. The choice of treatment must depend on the patient’s clinical condition and a regional approach should be applied in dealing with such trauma in the torso.

Disclaimer: This report has been submitted for poster presentation in PGMI Symposium 2020. It is not yet approved for presentation.