Wheat pill (zinc or aluminium phosphide), also known as rice pill, is used as rodenticide in wheat and rice storage reservoirs. In developing countries such as Pakistan there has been an increase in the number of aluminium phosphide (wheat pill) poisoning with suicidal intent due to its easy accessibility. It has a high mortality rate, with no antidote available. A young female presented with classical signs and symptoms of wheat pill poisoning, although during her stay at the hospital she developed cardiac arrhythmias leading to shock, haematuria, pleural effusion, and hyperglycaemia due to acute pancreatitis. Due to the appropriate recognition and management of the complications, the patient was able to recuperate. Appropriate transfer to Intensive Care Unit and prompt recognition of complications can lead to good outcomes. We recommend that there should be a nationwide cognizance campaign regarding the lethal consequences of wheat pill consumption by humans and proper disposal of this deadly material.

Rodenticide and organophosphate poisoning are among the leading methods of suicide attempt in developing countries due to easy accessibility and low cost. Wheat pill — aluminium/zinc phosphide — is a rodenticide which is readily available in the market and is used to store wheat and rice, in the form of pellet, tablets or powder. It is extremely toxic and low-priced.1

When the solid form is exposed to moisture, it releases phosphine gas which is lethal to both rodents and humans.2 Based on the National Health Survey of Pakistan, wheat pill poisoning has been labelled as the second commonest method of suicidal attempts.3

A high mortality has been witnessed in those exposed to this toxic pill, despite resuscitative measures.1 The number of cases in Pakistan has escalated over the years; with the adolescents/young adults being mostly affected.3 Diagnosis is clinical and based on orthodox symptoms, in case of zinc phosphide ingestion; imaging studies can be of help since it is radio-opaque.4

We present the case of a young woman, who presented with wheat pill poisoning and had numerous complications but was able to improve as a result of apt diagnosis and intervention.

A 25-year-old housewife, mother of two, and a resident of suburban area of Islamabad, presented to the accident and emergency department of Pakistan Institute of Medical Sciences (PIMS) on June 21, 2019, due to deliberate ingestion of unknown amount of wheat pills after a domestic conflict.

This case report has been reviewed in the departmental meeting and was approved for submission after the department head’s approval and clearance.

On presentation she had severe epigastric pain with nausea and vomiting, although there was no haematemesis or diarrhoea.

On examination, the patient’s Glasgow Coma Scale (GCS) was 12/15. Her Blood Pressure was 90/60mmHg, pulse 110/minute, respiratory rate 26/minute, blood oxygen saturation levels (SpO2) 97% on room air. Respiratory examination was unremarkable; the abdomen was soft, with grade II tenderness at the epigastrium without visceromegaly. The central nervous system (CNS) examination was suboptimal due to low GCS; however, she was moving all four limbs and Babinski sign was negative. The baseline Complete Blood Count (CBC) revealed leucocytosis with normal platelet count and haemoglobin level (Table).

She underwent a gastric lavage with coconut oil in the emergency department, followed by symptomatic management with antiemetics, proton pump inhibitors and vigorous intravenous hydration. The patient’s orientation and consciousness level improved after initial management. She suddenly developed ventricular tachycardia with hypotension of 80/70 mmHg; Amiodarone infusion 300mg (100ml N/saline at 20ml/hr) was initiated and continued for 24 hours. The patient remained oliguric during the initial 24 hours of admission. With adequate hydration, the renal output improved along with RFTs. After 48 hours of admission, the patient’s clinical and radiological condition worsened. She developed dyspnoea with 86% saturation on room air; on chest auscultation, there were bilateral crepitations and stony, dull percussion note. Chest x-ray (CXR) revealed bilateral pleural effusion (figure 1), with reticular shadows. Diagnostic pleurocentesis was done which revealed transudative fluid. 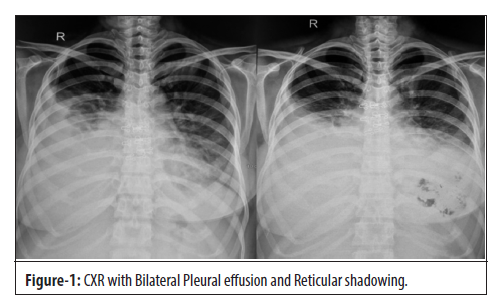 The patient complained of persistent epigastric pain, raising the suspicion of acute pancreatitis and thus initial work up was done which revealed serum lipase of 212mg/dl, which ascended to 394mg/dl and then 414mg/dl periodically. She was kept Nil per Os (NPO) during her treatment. CT scan of the abdomen with pancreatic protocol was done and revealed acute pancreatitis (figure 2). 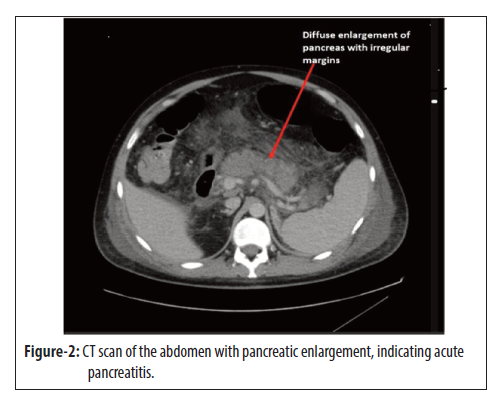 The patient improved clinically and chemically. After 10 days of intensive treatment she was discharged, was doing fairly well on follow up after one week. Informed consent was taken from the patient for using her details for reporting purposes.

Poisoning is the foremost cause of suicide in both developing and developed countries. Among these, pesticides and rodenticides are the topmost due to their cheaper price and easy accessibility.1 Pakistan is an agricultural country, where the use of wheat pill/rice pill and organophosphates is common, especially in rural areas. Along with corrosive injuries to the airways and oral/gastric mucosa, there is damage on cellular level, to mitochondria and inhibition of cytochrome C oxidase, leading to formation of highly reactive hydroxy radicals. Another proposed mechanism of cellular injury in Aluminium phosphide poisoning is glutathione reduction at the cellular level. Indicators of cellular injury reach a peak level by 48 hours and then normalise by the fifth day.5,6 Circulatory collapse, cardiac arrhythmias, gastric inflammation, acute respiratory distress syndrome, whilst involving almost every major organ of the body, makes patient management difficult and challenging. Since no antidote is available for aluminium phosphide poisoning, the management depends on supportive care and treating the arising complications.7,8

Initial Resuscitation and maintaining airways are the key factors in the management. Gastric lavage with potassium permanganate carried out immediately after ingestion has good outcomes as it converts phosphine to phosphate. Apart from this, the use of coconut oil within six hours of ingestion can be useful.2

Myocardial injury, cardiac shock, and arrhythmias are the most common causes of mortality in these patients, hence prompt identification of shock and cardiac rhythm instabilities can prevent fatal outcomes. In some circumstances, anti-arrhythmic drugs and temporary pacemakers are also used.9 Magnesium sulphate has proven to be effective in prevention and treatment of cardiac arrhythmias.10

Hyperglycaemia at admission has been a poor prognostic marker, hence it should be monitored and treated throughout hospital stay.12 Before discharge, patients should have a barium swallow and upper GI endoscopy to evaluate complications of Phosphine ingestion.5 They should also undergo psychological assessment for suicidal tendencies.

In our patient, acute respiratory distress syndrome, acute pancreatitis, ventricular tachycardia with circulatory collapse, haematuria, generalised oedema and hypokalaemia were the obvious complications. Each complication was treated as per protocol. Diagnosis of wheat pill poisoning was based on clinical presentation and the patient herself acknowledged the ingestion. The complications were proven, based on symptoms, laboratory investigations and specific imaging modalities. This led to an alteration of treatment regimen and thus, aversion of unwanted morbidity and mortality.

Due to non-availability of urgent CT Scan of the abdomen with pancreatic protocol, the patient’s acute pancreatitis was diagnosed with a delay and management of this particular complication was postponed, though despite this hurdle she was managed on the basis of biochemical profile and undesirable consequences were avoided.

Cardiac Arrythmias and ARDS are the lethal complications encountered in this patient which were managed timely with anti-arrythmics and steroids for ARDS. Successful management was possible due to focussed intervention relating to symptoms which patient presented with and during her stay instead of treating the underlying cause which has no specific anti-dote or treatment. In wheat pill poisoning complications are to be addressed timely to prevent morbidity and mortality. Aggressive management in intensive care units is recommended. Nationwide campaigns should be introduced to spread awareness among individuals regarding its use, deadly effects on humans and proper disposal.