Prevalence of allergic fungal sinusitis among patients with nasal polyposis

Allergic fungal sinusitis (AFS) was recognised as a distinct and separate clinical disorder for the first time in 19761 and it has become increasingly well-defined in the last couple of decades.2 AFS is known to be a type I hypersensitivity reaction. AFS patients may present with unilateral or bilateral nasal polyps3 and are diagnosed by the presence of distinctive histological findings.2

In 1994, a diagnostic criterion focussed on the characteristic features of AFS which included immunological, radiographical and histological features. These features included type I hypersensitivity, presence of polyps in sinonasal region, typical features on CT-PNS, cultures positive for fungus and fungal elements present in allergic mucin without tissue invasion.4

Geographical location has an impact on AFS incidence, with higher incidence at more humid areas. Most commonly it is seen among adolescents and young adults in second decade of life2. Male and females are affected equally with ratio of 1:1. Some theories suggest that polyps develop due to conditions causing chronic inflammation in nose and PNSs.5

Multiple epidemiological studies found only 1-2% of patients having nasal polyposis with positive skin prick test6-8 showing very little evidence to the assumption that allergy predisposes to nasal polyposis because of the presence of watery rhinorrhoea and mucosal swelling along with eosinophils in nasal secretion.9 AFS is a specific term given due to the association of nasal polyps with fungal cultures.6,10

Around 5-10% of patients with chronic rhinosinusitis are diagnosed as AFS cases. The prevalence of AFS in Saudi Arabia was reported to be 12.1%11 while it was 9.45% in Iran.12

Lund et al. described a method for radiological staging of chronic rhinosinusitis based on finding of CT scan with a maximum score of 24 for both sides combined.13 It has been accepted and used widely.14 Lu-Myers et al. concluded that AFS patients had high Lund-Mackay score.15

The current study was planned to determine the frequency of AFS in patients with nasal polyps, and to compare the Lund-Mackay scores of patients with and without AFS.

The cross-sectional longitudinal study was conducted at a tertiary healthcare centre in Karachi, Pakistan, from December 2016 to November 2018. Exemption was taken from the ethics review committee of the Aga Khan University Hospital, Karachi. The sample size was calculated using OpenEpi16 calculator with AFS frequency 12.1%11 precision 6% and confidence level 95%. The sample was raised using non probability consecutive technique.

All patients of either gender with sinonasal polyposis, diagnosed on the basis of anterior rhinoscopy, rigid endoscopy and CT-PNS, and undergoing endoscopic sinus surgery were included. Those having previous history of surgery and patients with incomplete records were excluded.

Lund-Mackay scoring based on CT-PNS of each patient was done by two radiologists and the mean was taken as the final score. Sinonasal contents removed during surgery were sent for histopathology and fungal culture to look for allergic mucin with fungal hyphae and the growth of fungus. AFS was diagnosed when histopathology showed allergic mucin with fungal hyphae, and culture was positive for fungal growth. All patients were followed up for a minimum duration of 12 months to look for recurrence. 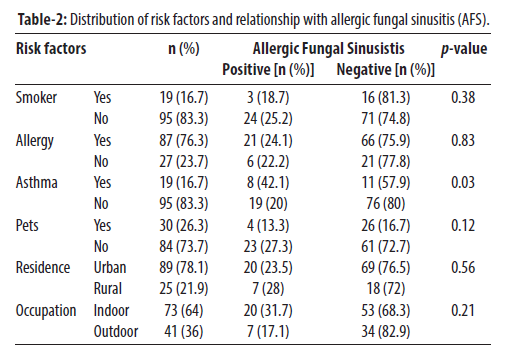 The current study comprised 114 patients with preoperative diagnosis of sinonasal polyposis. AFS was proven in 27(23.7%) on the basis of histo-pathological features and positive fungal cultures.

The current study followed up on all the patients for a minimum of 12 months, and 11(9.6%) cases presented with recurrent disease; 4(36.4%) AFS and 7(63.6%) non-AFS patients. A study showed recurrence rate to be 19.54%.12 A retrospective study reported recurrence rate of 60% with a mean follow-up of 40 months.19 Shorter follow-up period could be the cause of lower rate of recurrence reported in the current study. Further, 19(16.7%) cases with sinonasal polyposis were asthmatic in the current study, with 8(29.6%) being AFS-positive (p=0.03). A study reported association of asthma with nasal polyposis in 27.5% cases and only 2(16.7%) were AFS patients (p>0.05)(12). One study reported association of asthma with sinonasal polyps in 25(27.5%) patients compared to just 1(9%) with AFS.11 Further, AFS and non-fungal eosinophilic mucin rhinosinusitis combined may have resulted in high rates of association with asthma.20

In 27 cases of AFS, aspergillus (A.) species were revealed in 25 cases; A. fumigatus in 23 and A. clavatus in 2 cases. One case revealed chryosporium species and 1 revealed bipolaris and there was no significant difference in the clinical course of patients (p>0.05). Similar findings were reported earlier from the Middle East, while dematiaceous is the most common found organism in the United States.11,12,21

In the current study, the mean Lund-Mackay score was 18.8 for AFS patients compared to 13.2 in non-AFS patients. Similar significant difference was seen in an earlier study.12