Objective: To determine the distribution of samples exhibiting candida growth among the blood cultures, and the antifungal susceptibility.

Methods: The retrospective study was conducted at Samsun Training and Research Hospital, Samsun, Turkey, and comprised data of immunosuppressed patients with sepsis from January to December 2018. Yeast growth was typed by means of colony morphology, germ tube formation and the VITEK 2 system. The susceptibility was determined using the same automated system. Resistant strains were also tested using the dilution method. Data was analysed using SPSS 25.

Candida (C.) species are normal flora members of human skin and mucous membranes.1,2 However, in the case of a change in the endogenous flora, these fungal elements colonise by proliferating.1-3 Candida colonisation is especially common in patients with disrupted skin and mucous membrane integrity due to wounds or surgical interventions, or in intensive care unit (ICU) patients who are catheterised or intubated.2-4 Antibacterial drug use in these patients is also an important factor that facilitates candida colonisation.4

Invasive infections caused by Candida species can lead to mortality and morbidity.3-5 In particular, in patients with compromised immune systems, the mortality rate of candidiasis resulting from the proliferation of candida species entering the bloodstream has been reported to be 70%.4,5 These fungal microorganisms have been reported to enter the bloodstream most often through the gastrointestinal or urinary tract, or intravascular catheters.5 Factors such as gastrointestinal interventions, central venous catheters, mechanical ventilation, burns, total parenteral feeding, malignant diseases, extended stay in the ICU, use of broad-spectrum antibiotics and candida colonisation in the oral mucosa are important risk factors for the emergence of candidemia.4,5

The retrospective study was conducted at the Department of Microbiology, Samsun Training and Research Hospital, Samsun, Turkey, and comprised data of immunosuppressed patients with sepsis from January to December 2018 who had stayed in hospital for at least 7 days.

After approval from the institutional ethics review committee, the sample size was calculated using power analysis that showed power 90% and alpha 0.05 respectively. The data was retrieved and yeast growth detected in blood cultures sent to the microbiology laboratory from various clinics were typed using conventional methods, such as colony morphology and germ tube formation, as well as the VITEK 2 Compact (Biomerieux, France) automated identification system. Susceptibilities to fluconazole (FL), voriconazole (VR), flucytosine (FLU), amphotericin B (AB), micafungin (MF) and caspofungin (KF) were examined through the minimum inhibitory concentration (MIC) results obtained from the same automated system. Susceptibility results were interpreted as susceptible or resistant according to European Committee on Antimicrobial Susceptibility Testing (EUCAST) criteria.9 C. albicans ATCC 14053 and C. parapsilosis ATCC 22019 were used as internal quality control strains. In addition, resistance strains were tested using the dilution method. The recommendations of EUCAST definitive document (E.Def) 7.3.19 were accepted. Tests were standardised by a spectrophotometer, buffered with Roswell Park Memorial Institute (RMPI) 1640 medium with 2% glucose and incubated at 35oC for 24h. Additional drug dilution from 0.125 to 64mg/L for FL and FLU, and from 0.008 to 4mg/L for the other antifungals was carried out. The final inoculums were prepared from 0.5 to 2.5x105 colony-forming units (CFU)/mL of dilutions. The MICs were the lowest drug concentrations that showed 100% inhibition of growth.

C. albicans, while C. parapsiosis was the most common among non-albicans species 13(26%) (Table). 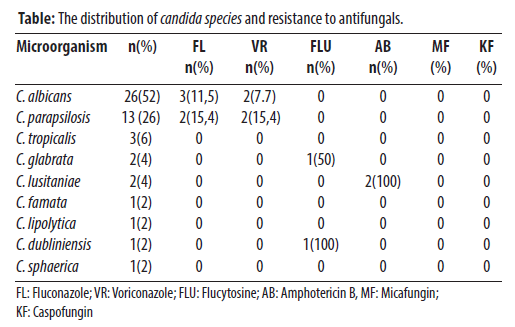 The findings obtained through both the dilution method and the automated system were consistent.

In 48(96%) cases, patients had taken prolonged antimicrobial therapies with cephalosporins, carbapenems or colistin prior to the occurrence of candidemia.

Candida species lead to an increasing rate of invasive infections, especially in immunosuppressed patients.4,10 Candidemia causes a high rate of mortality, especially in ICU patients.4,5,10 In addition, it increases the duration of hospital and / or ICU stay, and the cost of treatment.5,10 The distribution of candida species causing significant infections varies depending on the characteristics of the patients and the study location.10,11 In the current study, the distribution and susceptibilities of candidemia agents were examined using an automated system with close to 100% sensitivity in results, while susceptibility was determined using MIC obtained through the same system in line with literature.12,13

In terms of mortality, Tsay et al.23 reported 25%. Candida species most frequently isolated from blood cultures were C. albicans (38%), C. glabrata (30%), C. parapsilosis (14%) and C. tropicalis (7%). Resistance rate to FL of all candida isolates was 6%23. C. albicans (37.3%) was the most common species isolated by Lin et al.24 in a third-line hospital in China, while C. parapsilosis (24.1%), C. tropicalis (22.8%) and C. glabrata (14.5%) were also isolated. Drug resistance was determined to be 15.7% for FL, 10.8% for FLU and 2.4% for AB.24 In a study conducted in the United Kingdom, the most common predisposing factors were the use of broad-spectrum antibiotics, the presence of an intravascular device, ICU admission, and recent surgery. C. albicans constituted 43% of the causative agents, followed by C. glabrata 31% and C. parapsilosis 20%. All C. albicans isolates were susceptible to AB, VR, FL, itraconazole and KF. Candida strains (84%) were susceptible to FL, while 1 C. glabrata and 1 C. krusei isolate were be resistant to FL. Dose-dependent sensitivity to FL in C. glabrata strain was 39%25. In accordance with literature, C. albicans (52%) and C. parapsilosis (26%) were the most frequently isolated species in the current study. Other yeast species isolated less frequently in the current study were C. tropicalis (6%), C. glabrata (4%) and C. lusitaniae (4%). The percentages for these species in the aforementioned studies varied.8,14,15,18

Since C. tropicalis is the second most virulent candida species and can suppress C. albicans in most cases, it is important to isolate C. tropicalis from blood cultures.26 Likewise, it is important to isolate C. glabrata from blood cultures and to determine the susceptibility profile since, although previously thought not to be a pathogen, its pathogenicity was discovered over time and it was found to be resistant to commonly used antifungals.27 In the current study, each of the C. famata, C. lipolytica, C. dubliniensis and C. sphaerica species were only isolated once from blood samples. These species have been reported to be rarely detected in blood cultures.5,8,10,14-22

It has been reported that 80% of candidemia cases are hospital-acquired, and approximately half of them are reported in ICU patients.8 It has been reported that 90% patients in ICUs may become colonised by candida species.4 In addition, colonisation was reported in 80% of patients who stayed in the ICU for more than a week.4 Percentage of ICU patients among the candidaemia cases varies in literature.5,8,14,16,19,21,22 In the current study, the percentage of ICU cases was 62%. In the current study, 26% candida isolates were resistant to some antifungal, demonstrating the importance of identifying antifungal susceptibility patterns.

Candidemia is a serious life-threatening condition and appropriate treatment should be initiated rapidly. Therefore, after the isolation of the causative agent of candidemia, it is critical to determine the susceptibility profile against antifungals.28,29 It has been reported that prophylactic antifungal use may contribute to the emergence of antifungal resistant strains, especially in ICU and immunosuppressed patients.16 Garnacho-Montero et al.30 found that taking FL significantly increased the risk of occurrence of candidemia cases caused by FL-resistant strains. FL is a commonly used triazole in candida infections. In rare cases, resistance to FL leads to cross-resistance to other azoles.31 This increases the importance of determining the resistance status of candida isolate to FL.25,27 FL resistance rates in the causative agents of candidiasis have been reported with varying degrees.17,19,21,32 Atalay et al.15 and Aydın et al.18 did not report FL resistance in C. albicans isolates, while Toprak et al.33 did not report FL resistance in all candida species. In the current study, FL resistance was noted in 10% isolates. The AB polyene group is an antifungal and is used in the treatment of invasive fungal infections. C. lusitaniae and C. guilliermondii strains are intrinsically resistant to AB.22,29 Resistance can be seen in other candida species, albeit rarely.22,29 Studies15,21,33 reported that all candida strains isolated from cases of candidemia were susceptible to AB. Aydın et al.18 found only 2 isolates resistant to AB, Mutlu-Sarıgüzel et al.16 reported that 5.8% of C. albicans and 8.4% of non-albicans isolates were resistant to AB. Çalışkan et al.8 found 2 C. albicans strains moderately susceptible to AB. Kilincel et al.19 found resistance to AB in 4 C. albicans and 2 non-albicans isolates. In the current study, all non-naturally resistant candida isolates were susceptible to AB. Çıtak et al.17 found 3 C. albicans isolates resistant to FLU and found no resistance in other candida species. Çalışkan et al.8 found no resistance in C. albicans isolates and reported resistance in one C. glabrata isolate. In the current study, C. glabrata and C. dubliniensis isolates were resistant to FLU. Öztürk et al.21 found FLU resistance in only 1 C. glabrata strain. The limitation of the current stud is the low number of strains. The reason for this is that the number of patients decreased during the time allowed under the ethical permission for the study. Sufficient yeast species could not be isolated from blood samples during this time.

The most common isolate was C. albicans, while C. parapsiosis was the most common among non-albicans species. A relatively high resistance rate was noted against FL. The resistance rates to antifungal drugs vary between different candida species. FL is the first-line drug of choice in candida treatment. In case of resistance, it requires the use of intravenous broad-spectrum antifungal drugs. In order to plan appropriate antifungal treatment, identification at the species level and determination of the antifungal susceptibility pattern may be a helpful guide for diagnosis and treatment policies.