Results: Of the 140 participants, there were 70(50%) patients and as many controls. Overall, there were 72(52%) males and 68(48%) females. High level of autistic traits (p<0.001) and paranormal beliefs (p<0.001) had a significant impact on obsessive compulsive disorder. Impairments in recognition of emotions were related to the presence of high autistic traits and obsessive compulsive symptoms in the patients group (p<0.05). Emotion of disgust (p<0.001) was significantly impaired in the patients, while the differences were not significant in terms of emotions of happiness and surprise (p>0.05).

Over the last few years, the occurrence of obsessive compulsive disorder (OCD) has become more common than it was presumed initially and it is described by distress-inducing thoughts and beliefs called obsessions that an individual tries to dismiss through ritualistic actions or mental acts  that are compulsions which can be seen in behaviour.1 OCD is highly incapacitating, and the World Health Organisation (WHO) has reported it to be amongst the 10 most disabling medical conditions.2 Prevalence data in Pakistan shows lifetime OCD rate of 3% in the general population.3 OCD has earlier onset in males than females, while greater number of females suffer from it than males.4

High-functioning autism (HFA) is expressed in the form of OCD with autism in adult psychiatry, and in one study, almost 20% of adult OCD patients exhibited autistic traits.5 Autism-related studies have found that autistic traits are distributed across the normal population as well with high level of impairments in people with autism spectrum disorder (ASD).6,7 The incidence of co-morbidity of autism traits or ASD symptoms in OCD patients is 4-8 times higher compared to normal population.8

Literature highlights the presence of paranormal and superstitious beliefs in OCD patients. Magical thinking, stress and anxiety accounts for 62% variance in OCD symptoms.9 A study found a strong relationship between magical ideation and OCD in clinical as well as non-clinical sample.10 Most studies reported that approximately 40% of OCD patients have impaired ability to recognise facial emotions accurately.11 Facial expressions represent a medium of conveying information about how someone feels, and emotional bias means biases in cognition and decision-making due to emotional factors. OCD patients experience difficulty in recognising emotions of disgust.12 A study found that individuals with high autistic traits are not responsive to social rewards compared to non-social rewards, and i t can be concluded that people with autism or high predominance of autistic traits are deficient in identifying and responding to social rewards.13

The cross-sectional quasi-experimental study was conducted from November 2017 to November 2018 at the Government College University, Lahore, Pakistan. After approval from the institutional ethics review committee, the sample size was calculated using Raosoft website’s calculations, with 50% response distribution, 5% margin of error and 76% confidence interval (CI).14 The sample was raised using purposive sampling technique from different psychiatric units in Lahore-based hospitals, including Services Hospital, Mayo Hospital, Jinnah Hospital, Fountain House and Sir Ganga Ram Hospital. Formal permission was obtained from each of the participating hospitals’ administration.  Those included were OCD patients from the hospitals and healthy controls from the community aged 20-40 years regardless of gender. Those who refused to participate were excluded.

After taking informed consent from the subjects, data was collected using the Obsessive Compulsive Disorder Symptom Checklist (OCDSC) the Urdu version of which has reliability with α = 0.9.15 The 15-item checklist, filled by both the patients and the controls, was used as a screening tool to assess the frequency and severity of obsessive and compulsive symptoms. Each item is rated on a 4-point Likert scale ranging from 0 = “never” to 3 = “too much”, with a cut-off score of 19. Also used was the self-administered Autism Spectrum Quotient (AQ)16 for assessing the extent to which an adult with average intelligence has the traits related to the autistic spectrum.17 It is a 50-item scale consisting of 5 areas assessing social skills, attention switching, attention to details, communication and imagination. The subjects were rated on a two-point Likert scale 0 and 1 having a cut-off score of 32. Paranormal beliefs were measured using the Revised Paranormal Belief Scale (RPBS) that has 26 items consisting of seven broad factors: traditional religious beliefs, Psi (extra sensory perception), witchcraft, superstition, spiritualism, extraordinary life forms, and precognition. The statements were rated on a 7-point Likert scale having a cut-off score of 40.18 Emotion Recognition Task (ERT) is a computerised paradigm presenting morphed video clips of facial emotional expressions at different intensities, which has been developed for studies on emotion perception and has no time restriction.19 A total of 96 trails with six basic universal emotions were presented. Urdu version of the AQ20, OCDSC tools was used in the study. RPBS was translated in Urdu (forward-backward translation method) and some items were modified to make them culturally relevant. The adapted scale has high reliability of 0.83; making it a reliable tool for use with the indigenous population. It took about 45-50 minutes for a subject to fill the questionnaire.

Data was analyzed using SPSS 20. The t-test was used to investigate significant mean differences in emotions between the groups. Regression analysis was applied to identify significant predictors. Statistical significance was set at p<0.05.

Of the 140 participants, there were 70(50%) patients and as many controls. Overall, there were 72(52%) males and 68(48%) females. The patients had high autistic traits, exhibited more paranormal beliefs and showed more emotional response bias than the control group (p<0.05). Happiness was the best recognised emotion by both groups, but they differed significantly in recognising the emotion of disgust (p<0.05). The emotion of anger was poorly recognised by OCD patients (Table 1).

No significant gender differences were found among OCD patients (Table 2).

Autistic traits were significant predictors of obsessive compulsive symptoms in OCD patients, and the decreased ability to recognise the emotion of disgust meant symptom severity (Table 3). 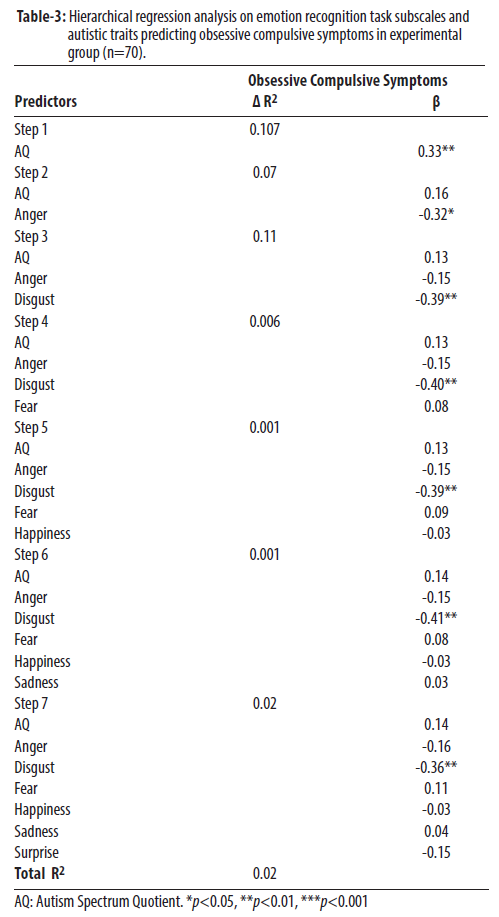 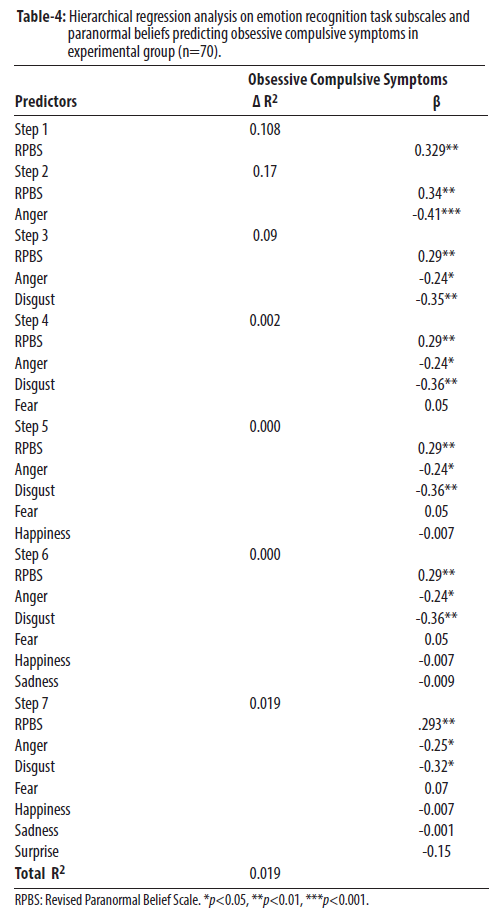 OCD is a mental disorder having features overlapping with superstitious behaviours. The current study revealed high prevalence of paranormal beliefs in OCD patients. Studies reported that about 54% of OCD patients believed in supernatural phenomenon and 57.3% participants ascribed supernatural causes to their illness.23 Furthermore, overall results indicate almost equal prevalence of paranormal beliefs across gender. Another study revealed that considerable number of participants believed in black magic, ghosts and talisman in Pakistan.24 Additionally, participants reported that the religion supported supernatural concepts. A study commented that Islam does not support paranormal beliefs, but such beliefs prevail in the community due to cultural traditions.24

Neurological deficits have been reported in people with high autistic traits and OCD, which may explain the fact that they are more emotionally detached from others than people with other anxiety disorders.2,25 The current study found that females with OCD showed accurate recognition of emotions compared to males. Similar deficits were found in males’ ability to understand thoughts and feelings of others, which contribute to poor recognition of emotions and poor social interaction in them.19,24,26 OCD patients showed poor performance with ERT. People with OCD or high autistic traits have deficits in understanding emotions, perspective and processing social cues of others.27 Furthermore, the results of the present study suggested that OCD patients showed marked deficits in recognising emotions of disgust, anger and sadness on ERT which is in line with a study.28 The emotions of happiness and surprise were easily recognised by participants of both groups, as reported earlier.19

The emotion of fear was more accurately identified by OCD patients in the current study as has been explained by an earlier study.29

High levels of autistic traits and paranormal beliefs were present in patients with OCD. However, males performed poorly at recognising emotions from facial expressions. Marked deficits in recognition of facial expressions of disgust and anger were seen in the patients.

Ethical approval: The study commenced after approval from the institutional ethics committee.

24.    Farooq A, Kayani AK. Prevalence of superstitions and other supernaturals in rural Punjab: a sociological perspective. South Asian Stud 2012; 27: 335-44.