Objective: To investigate the awareness about testicular cancer and testicular self examination among medical students and the community.

Conclusion: The rate of awareness and performing testicular self examination was low in the general population. However, the rates significantly increased in medical students from the first to the final year.

Testicular cancer (TC) is the most common malignancy of the male population aged 20-40 years and is the second most common malignancy among males aged 15-19 years.1 In industrialised countries, the incidence of TC has increased, whereas the incidence of metastatic TC has decreased during the last decades.2-4 TC is a highly progressive and mortal disease that may have detrimental effects. It can quickly metastasise to retroperitoneal lymph nodes or distant organs, and the patients have to get chemotherapy for further treatment which is a destructive treatment modality with chances of morbidity both during and after the treatment. Despite the additional treatments, TC may still lead to mortality. For that reason, early diagnosis is very important to decrease the disease and treatment-related morbidity and mortality. In order to diagnose TC at an early stage, patient’s self palpation of the testicles, which is called testicular self examination (TSE), bears significant importance. Similar to breast cancer, self-examination is the only way to diagnose TC at an early stage. In order to achieve this goal, it is essential to create public awareness. Education of the target population is one of the ways to spread awareness.

TSE is the main method for early detection of the physical abnormalities in the testis. The American Medical Association and the American Urological Association promote and support TC awareness and education of TSE for early detection of TC. The American Cancer Society recommends TC screening as a part of routine cancer-related physical examinations. According to the European Association of Urology (EAU), stage and prognosis are directly associated with early diagnosis. The EAU guideline recommends informing the patients about the importance of TSE in the presence of clinical risk factors, particularly in patients with a family history of TC.5 Nevertheless, it was shown that the awareness of TC and the rate of performing TSE were very limited among the young male population.6 It is an important to realise this fact and try to develop public education exercises in order to decrease TC mortality and morbidity.

The current study was planned to investigate the awareness of TC and TSE in medical students and the community.

The cross-sectional comparative study was conducted from January to April 2019 at Tekirdag, Turkey. After approval from the ethics committee for non-interventional studies of Tekirdağ Namık Kemal University, Turkey, the sample size was calculated using Cochran’s formula.7 The sample was raised from among young medical students of all academic years aged 18-26 years as group A along with control group B that had age-matched male high school graduates from the community. The participants in the control group did not have any professional education related to health. Those with a history of TC, a family history of TC, a history of testicular surgery, including undescended testis, varicocelectomy and hydrocelectomy were excluded.

After getting written informed consent from the subjects, data was collected using a self-generated 16-item face-to-face survey questionnaire in the Turkish language. The survey did not have a scale and did not attempt quantitative measurement.

Data was analysed and compared using SPSS 20. Normal distribution of continuous variables was evaluated using Kolmogorov-Smirnov test and data was expressed as mean ± standard deviation (SD) or medians, as appropriate. The differences between groups were assessed using unpaired t tests for parametric data and Mann–Whitney U test for non-parametric data. Differences in frequencies were tested using chi-squared test. P<0.05 were considered statistically significant. 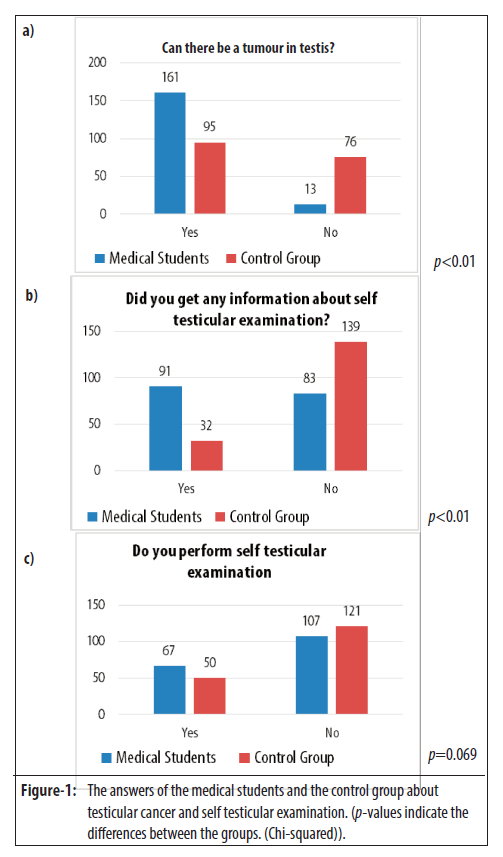 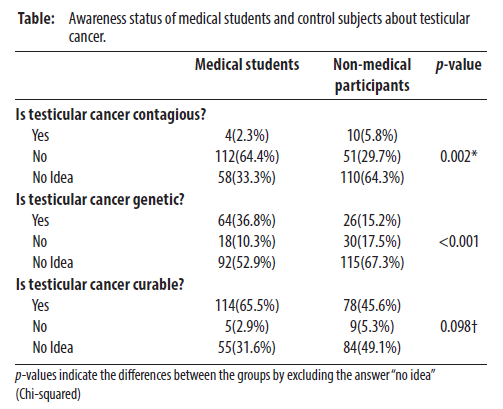 Information status was evaluated about TC through questions about the genetic susceptibility, curability and contagious possibility of the disease (Table) Questions about clinical findings of TC showed that 82(23.8%) participants believed painless testicular mass was the main clinical finding of TC, while 183(53%) had no idea in this regard. A total of 48(27.5%) subjects ingroup A and 34(19.8%) in group B were able to answer correctly (p=0.093) (Figure 2). 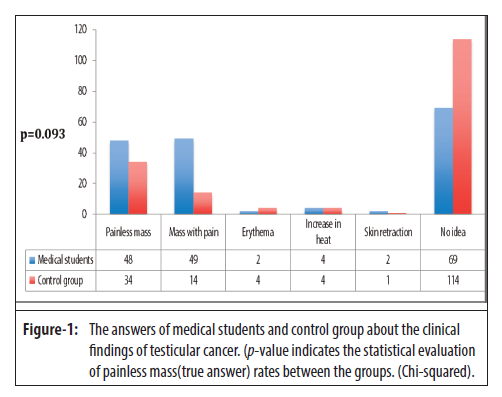 Within group Athe rate of awareness increased as the year of education increased (Figure 3). 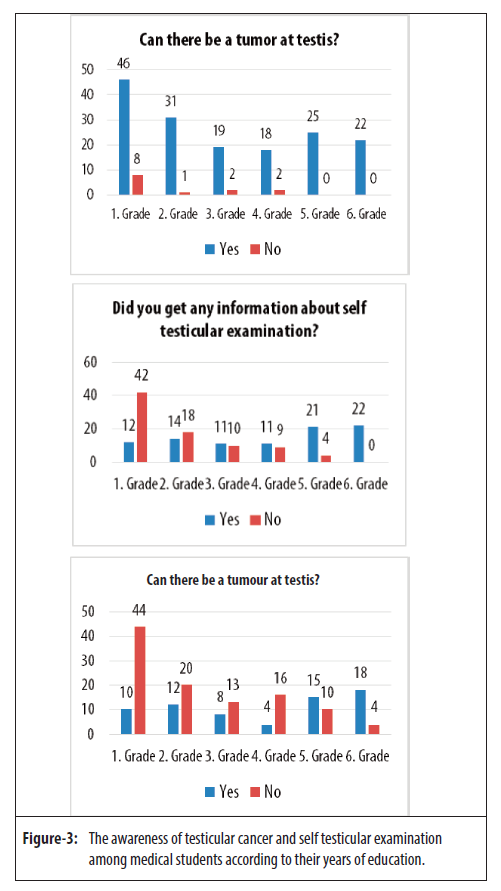 Testicular cancer represents 5% of urological and 1% of male tumours.8 It is one of the most curable solid-organ malignancies, but a delay in diagnosis makes the situation complicated. For this reason, early identification of TC is crucial for disease-specific mortality and morbidity. Recent studies from different countries have advised performing TSE for medical, psychological and economical aspects.9 Testicular cancer has high rates of survival, but a delay in diagnosis may dramatically decrease survival rate to 74%.10 In order to perform TSE, the first step is to be aware of TC. Almost 25% of the current study’s population was not aware that there could be cancer of the testicles. A certain level of information-deficit about TC awareness was also reported in other studies.11,12

When the current study compared the groups, the lack of awareness of TC was significantly lower among medical students compared to normal population. Participants in medical schools were more familiar with human anatomy and diseases, and it was not surprising that they had more awareness. The substantial improvement in awareness of TC after education was documented by other studies.13 The second step of performing TSE is to be aware of this examination. Almost two-thirds of the participants in the current study were not aware of TSE. Similar results were also reported in literature.14,15 The additive effect of TC awareness on TSE was also documented in some studies.6,13,16,17

One of the main objectives of the current study was to evaluate the behaviour of the participants towards performing TSE. Similar to the awareness of TSE, nearly two-thirds of the participants stated that they were not performing TSE. This outcome was not surprising because similar low rates of performing TSE were also reported in literature.14,15 An epidemiological study reported that men's health clinics and public health campaigns could be effective in enhancing public awareness. In addition, there can be beneficial outcomes of media campaigns advocating TSE with high-profile celebrities or practical demonstration of TSE on television.18 The current study has limitations. The face-to-face survey might have contributed to interpersonal bias. However, the questions were distinctive with simple “yes” and “no” questions, which might have been effective in decreasing this bias. The second limitation was related to the study population. The study significantly showed the increase of awareness among medical students. As these participants experienced a professional education, it may not be an exact conclusion that education has an impact on awareness related to TC and TSE. The results may actually illustrate that it is possible to increase public awareness with such educational programmes.

The awareness of TC and TSE and the rate of performing TSE were low among young male population. Awareness about TC and TSE increased significantly among medical students in the final years of their education. The rate of performing TSE was similar between medical students and controls, but it increased significantly in final year students.

Acknowledgements: We are grateful to the students of the Tekirdağ Namık Kemal University Medical School, Turkey.

12.    Kuzgunbay B. The Status of Testicular Self-Examination in the Early Diagnosis of Testicular Cancer: Conjuncture in the World and in Turkey. Bull Urooncol 2014; 13: 127-9.