Objective: To analyse dose-response relationship between the common risk factor of tobacco consumption and oral lesions like squamous cell carcinoma and pre-cancerous lesions.

Methods: The cross-sectional case-control study was conducted at Ziauddin University, Karachi from 2011 to 2016, and comprised histologically-confirmed cases of oral squamous cell carcinoma in group A, clinically-diagnosed oral pre-cancerous lesions in group B, and habit-matched controls in group C. The subjects were enrolled from 2011 to 2016. Life-time tobacco exposure was calculated using chewing index and smoking index for comparison between cases and controls. Data was analysed using SPSS 20.

Conclusion: Life-time tobacco exposure indices were either comparable or lower in patients compared to the controls.

Oral cancer in technologically advanced countries, like the United States, Japan, the United Kingdom and France, is mostly found to be associated with tobacco smoking with or without concomitant alcohol consumption. In addition, human papillomavirus (HPV) infection of oral mucosa, especially type 16 and 18, has been a contributory factor.1,2 However, out of several risk factors that have been linked to oral cancer, none is more closely associated than tobacco.3

In modern times, there are two basic forms via which tobacco is consumed: smokeless tobacco and smoked tobacco. Smokeless tobacco (SLT) is consumed through mouth or nose (snuffing) without burning it. This includes tobacco-chewing, sucking, applying its paste on teeth, stuffing tobacco between the teeth and the cheek etc. Smoking is done through products like cigarette, cigar, ‘sheesha’, ‘chillum’ (old version of modern ‘sheesha’), ‘huqqa’ and ‘bidi’ etc.4 The notion SLT implies tobacco consumption varying from chewing pure tobacco to a mixture of tobacco with additives, such as seen in products like ‘Paan’ (quid), ‘Naswar’, ‘Paan-Masala’, ‘Gutka’, ‘Khaini’ and ‘Mishri’, etc.5,6 However, there are certain very peculiar differences that exist in our part of the world with regard to constituents and modes of consumption. For instance, in Karachi it is the much prevalent habit of tobacco-chewing in forms like ‘Gutka’ and ‘Paan’, both containing a variety of potentially harmful ingredients, that have been linked to oral squamous cell carcinoma (OSCC) cases occupying the major bulk of head-and-neck cancers in the city. A substantial number is also engaged in the mixed habit of both chewing plus smoking.7 More recently, HPV-positivity was reported among citizens of Karachi from 17.9% to 19%. Studied subjects included those having a tobacco-chewing habit with or without oral premalignant lesions.8,9 As far as oral precancerous lesions (PCLs) are concerned, a study from Karachi on 337 people revealed ‘Gutka’ as the most prevalent chewable form of tobacco in oral submucous fibrosis (OSF) patients (45.5%), followed by ‘Naswar’ (37.56%).9 Researchers had previously linked tobacco smoking with oral leukoplakia and epithelial dysplasia.10

While examining the frequency and duration of SLT use, studies have demonstrated a dose-response relationship between tobacco consumption and oral cancer development.11 Studies have documented an increased risk of oral cancer among users of chewable tobacco, and the risk increases as the frequency of use increases, i.e., odds ratio (OR) of 1.1 for <5 times/day to 20.0 for >10 times/day.12 The same exposure-response relationship when assessed in terms of duration of tobacco use in years, led the researchers to find that the risk variation slightly decreased to >10 times compared to non-chewers; OR 0.8 for <10 years of consumption to 10.9 for >20 years of use compared to the non-chewers.13

The current study was planned to find out the level of exposure of oral mucosa to tobacco products in terms of life-time tobacco indices in Karachi, which features one of the world’s highest reported oral cancer incidence rate.

The cross-sectional case-control study was conducted at Ziauddin University, Karachi from 2011 to 2016. The subjects were enrolled from December 2011 to October 2016 from the Oncology Department of Ziauddin University Hospital, North Nazimabad, Karachi, the Otolaryngology Ward of Civil Hospital, Karachi, Dr. Ishrat ul Ebad Khan Institute of Oral Health Sciences (DIKIOHS) at the Dow University of Health Sciences (DUHS), Karachi and by setting up camps in different Karachi localities.

After approval from the ethics review boards of Ziauddin University and DUHS, the sample size was calculated using Epi-Info calculator version 6.0,14 at 10% precision and design effect 2 in the light of literature.15

The sample was raised using non-probability purposive sampling technique from among histologically-confirmed cases of OSCC in group A, clinically-diagnosed oral PCL cases in group B, and habit-matched controls in group C. For both the cases and the controls, the subjects had to be aged >10 years. For the controls, there had to be no prior history of any cancer, including oral cancer and oral PCL, and the tobacco habit had to approximately match in duration and frequency with those of the cases. Individuals with cancer of any site other than oral cavity, with any other serious disease, aged <10 years and those who did not give consent were excluded.

For the purpose of analysing the association between the nature of tobacco exposure and oral lesions, the subjects were further divided into different tobacco-habit groups as exclusive chewers who consumed tobacco only in the smokeless form either with or without additives, such as betel nut and lime etc.; exclusive smokers who smoked tobacco in forms like cigarettes, ‘bidis’ etc.; mixed tobacco habitués having individuals who consumed tobacco in both smokeless form and were also smokers; and habit-free individuals who reported a lack of former or current use of tobacco in any form.

Data, which was gathered after taking informed consent from the subjects, was analysed using SPSS 20. The findings were expressed as frequencies and percentages, or as mean and standard deviation, as applicable. 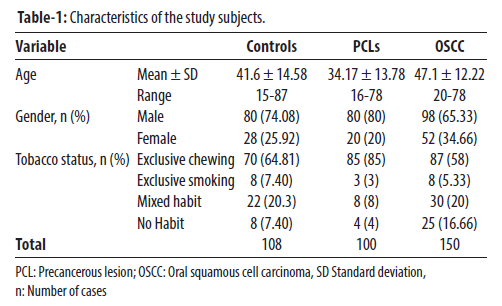 The mean and median life-time exposures were comparable among cancer cases and controls for all habit groups except exclusive chewers (Table 2). 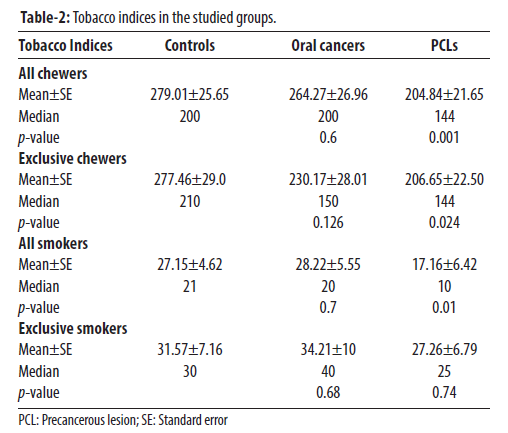 In the two patient groups, the life-time tobacco exposure, as depicted by tobacco indices, was either equal or lower compared to the controls (Figures 1-2). 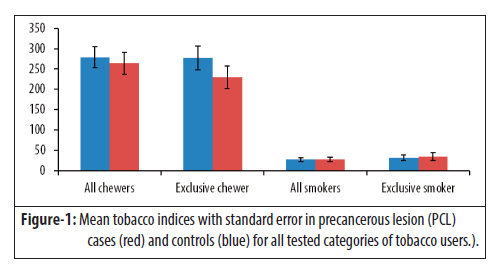 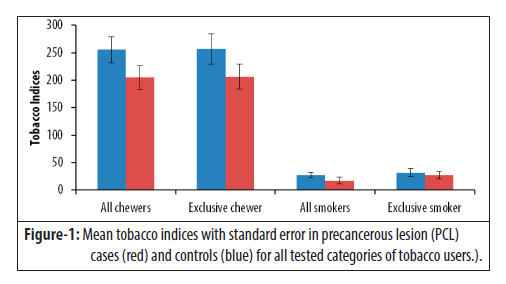 In the current study, buccal mucosa of the cheek stood out to be the commonest site for OSCC. Amongst tobacco habits, use of SLT is rampant in society and the most preferable site of tobacco placement is the buccal groove situated between cheek mucosa and the alveolar ridge. Previously, it has been documented that in SLT-associated OSCC tumour tissue expresses all enzymes required for metabolism of tobacco-associated nitrosamines.16 This may partly explain why in Pakistan the buccal mucosa of cheek is the primary site for cancer development in contrast to the tongue and floor of the mouth in the West.17 In Pakistan, tobacco is not chewed alone, but is mixed with a constellation of additives, like areca nut, that have been shown to have carcinogenic properties on their own.11 Similarly, slaked lime has been shown to have carcinogenic potential. It facilitates the production of reactive oxygen species (ROS) in the saliva of the chewers and also facilitates the hydrolysis of arecoline into arecaidine which in turn facilitates increased fibroblast proliferation and collagen synthesis essential for premalignant and malignant transformation of the affected tissues.18 The current study found a substantial proportion of SLT products containing slaked lime as an important ingredient.

Previous studies have suggested a strong association between various forms of SLT and oral cancer.19 A seven-fold increased risk has been reported among chewers of tobacco with additives compared to non-chewers.20,21 In the current study, among all tobacco-consuming habits, a more strong association of oral cancer cases was found with SLT in the form of chewable tobacco compared to those for smokers and pre-cancers in both smokers and SLT users.  This finding is consistent with earlier reviews.20,21 Published literature from North America and Europe suggested that the habit of smoking and alcohol use increases the risk for developing oral cancer with an increase in the total duration of exposure to these substances.11,22 In this context, several studies revealed a substantial increase in the risk of OSCC for chewable SLT products when the intensity of use increased from 5-10 per day compared to non-chewers.11,12,13

Results of the current study also suggest an exposure-response causal relationship between SLT use and oral cancer. This is true for both the intensity and the duration of use, combined together as tobacco-indices for life-time exposure of oral mucosa to available tobacco products. Higher life-time exposure indices were observed in oral cancer patients in the habit of consuming tobacco in both chewable and smoked forms compared to other habit groups in the oral cancer category. Similarly, these values were even higher than those that were found in patients having PCLs. Thus, a link between the above two modes of tobacco consumption and oral cancer was found when they were used simultaneously. Furthermore, the mean age of oral cancer cases in the current study was in the fifth decade of life. In a substantial proportion of target subjects, the habit of SLT use was usually taken up in early adolescence. By the time these individuals reached middle age, they had already been exposed to tobacco for two or three decades. This is in addition to the age being itself a risk factor for oral cancer.11,18,23 However, in overall analysis, which included age- and habit-matched controls, mean and median life-time exposures were comparable among cancer cases and controls for all habit groups except exclusive chewers. Here tobacco indices were found to be lower in cancer patients compared to habit-matched controls, but were nearer to PCLs. This finding is significant as, firstly, there was a large proportion of exclusive chewers in the sample, and, secondly, it showed that tobacco may not be the only aetiological factor playing a role in oral carcinogenesis. Similarly, in PCLs, lower mean and median values of tobacco indices were found for all categories in comparison with controls. Here again, the results are pointing towards additional causative agents / factors, like genetic predisposition, especially tobacco metabolism with subsequent generation of carcinogenic moieties as by-products of the biochemical processes involved.

The main limitation of the current study is the non-availability of histopathology slides for oral PCLs.

Chewing of tobacco with various additives, like betel nut, and smoking were found to be high-risk factors for oral cancer.

Source of Funding: Co-funded by the Higher Education Commission (HEC) of Pakistan and Ziauddin University, Karachi.