Trend of measles in Turkey: A retrospective secondary data analysis

Objective: To evaluate trends and epidemiological assessment about measles outbreak.

Methods: The retrospective secondary-data study was conducted at Turkey in the form of record scanning and the data of the whole country were scanned, from August 24, 2018, to April 5, 2020, and covered measles cases reported to the Ministry of Health between 1960 and 2019 and published in the statistical annuals.

Results: Over the 60-year period, there were 1,050,567 reported cases of measles, translating into 17,509 cases per year, with an incidence rate of 32.03 cases per hundred thousand. There were 18(30%) years in which the outbreak touched epidemic proportions. With the onset of vaccination in 1969, the incidence rate decreased to about 27/100,000. The incidence rate of measles decreased by 62% compared to pre-vaccination after a single dose of vaccine, and approximately 80% after the initiation of the Extended Immunisation Programme.

Conclusion: Due to problems in school vaccination, rejection of vaccines and imported cases in the country, fresh measles outbreaks have occurred in Turkey in recent years. Measles elimination target, as such, will have to be extended.

Measles, considered one of the most contagious diseases transmitted through direct contact with the secretions of infected people, is a viral childhood contagious infectious disease.1

The World Health Organisation (WHO) reported that during the absence of measles vaccination before 1963, large outbreaks occurred every 2-3 years, and measles caused about 2.6 million deaths each year.2 However, effective immunisation programmes controlled epidemics, and measles-related deaths decreased by 71%. Measles still causes infant and child deaths in many countries.2 However, the high immunisation rates shifted the age of the disease to advanced ages.2

The 10 countries where measles is most prevalent are Ukraine, Madagascar, India, Pakistan, Philippines, Yemen, Brazil, Nigeria, Thailand and the Democratic Republic of Congo. Although measles is most common in poor countries, some developed countries are now also struggling with measles outbreaks.3

WHO planned to eliminate measles in the European region at the end of 2010, But the target had to be postponed to 2015 due to outbreaks in many European countries.4 However, in 2015, epidemics hit several countries, including Bosnia and Herzegovina, Germany, Austria, Kyrgyzstan and Russia, and the elimination target was postponed to 2020. Measles outbreaks have affected 47 of the 53 countries in Europe.5,6

As a result of various initiatives, measles was eliminated in the American continent for the first time in 2016.2 However, in 2017 and 2018, many cases of measles were reported in countries, like the United States (US), Mexico, Brazil, Venezuela, Argentina and Canada, with the US recording the highest number of measles cases in the last 25 years.3

Turkey failed to meet the 2015 measles elimination goal that was set in 2002, and the target was postponed to 2020.7 However, it does not seem possible to achieve even the fresh target due to the increasing number of cases since 2017.3,8

It is known that there is a direct relationship between the frequency of the outbreak and the rates of immunisation.9 Most of the measles cases in Turkey in recent years related to unvaccinated children aged <1 year.10

A global reason for the immunisation rates to remain below the desired level is anti-vaccination attitude or rejection. The WHO designated the anti-vaccination movement as one of the 10 global health threats in 2019.2 Countries with the highest number of cases in Europe are the countries with the lowest rates of school vaccination and the highest level of anti-vaccination, such as Ukraine, Romania, Greece, France, Italy, Serbia, Portugal and England.6 Vaccine rejection is also a growing problem in Turkey. The number of children who could not get vaccinated due to rejection has increased approximately 115 times from 2011 to 2017.11 The level of immunisation increases the time between epidemics, and reduces the size of the epidemic. In order to prevent epidemics, the immunisation rate should be 92-95%. Even if the entire population has been vaccinated, measles epidemics will be seen because the vaccine efficiency is 95%. As 5% of the community will be added to the sensitive pool every year, the epidemic will occur when the pool is full.2

Another reason for outbreaks is imported cases. Turkey is exposed to intense waves of immigration from Syria over the last 10 years. Imported cases of measles arising from these individuals living in camps and in the community convert into domestic cases.15 As many as 42.5% of the 716 cases reported in 2018 in Turkey were imported.8

The current study was planned to evaluate trends, and to make epidemiological assessments about measles outbreaks on the basis of surveillance data.

The retrospective secondary-data study was conducted at Turkey in the form of record scanning and the data of the whole country were scanned, from August 24, 2018, to April 5, 2020, and covered measles cases reported to the Ministry of Health (MOH) between 1960 and 2019 and published in the statistical annuals. The year 1960 was the earliest date from which secure, reliabale and accessible data was available. There are 73 diseases in Turkey that are compulsorily notifiable infectious diseases, and measles is one of them. Data is collected from all health institutions, and diagnoses are made clinically with the help of laboratory analyses. Anyone with a maculopapular rash is considered to be a suspected measles case. The diagnosis is verified in the reference laboratory against the criterion set out by the 10th revision of the International Classification of Diseases (ICD-10),16 and the appropriate laboratory sample is sent to an online password-safe system. Where a case is detected in the provinces, daily active syndromic surveillance about the maculopapular rash is started. Filyasyo studies and contact follow-ups are performed for cases diagnosed with measles.

MOH publishes the number of cases every year as a statistical annual report.8

The data for the current study was obtained from these annual reports which were thoroughly scanned. The data for 2019 was taken from the WHO10 as the yearbook had not been published yet. There was a huge difference between the datasets of WHO and MOH related to 2005, the WHO data was used for being more reliable.10 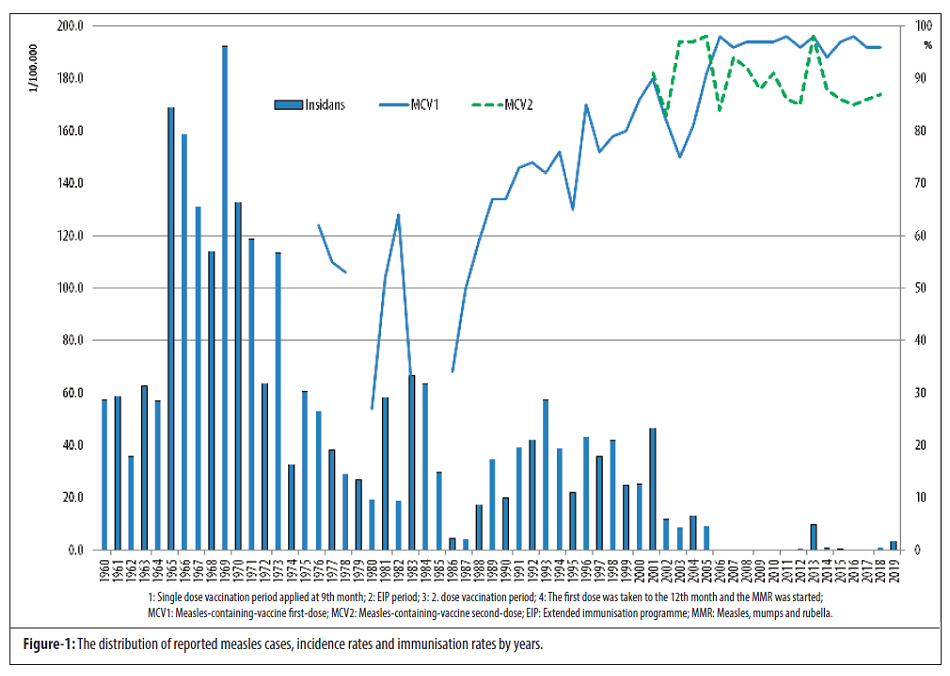 A significant decrease in the incidence rate started from 2001, and in 2009, there were only 4 cases. 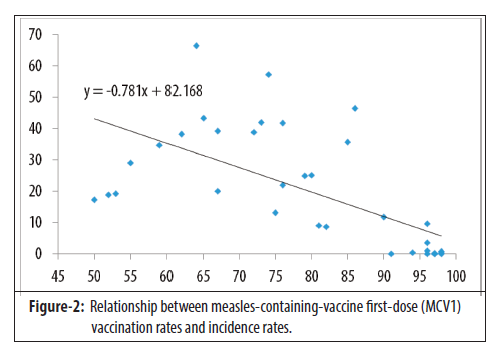 Measles was a disease that caused an outbreak every 3-4 years in the pre-immunisation period in Turkey.18 Things improved with the launch of the immunisation programme in 1970, but the disease has not been eliminated and remains an important public health problem.

In the 60 years between 1960 and 2019, there were 1,050,567 cases of measles in Turkey. The EIP was not enough to reduce the rate of incidence in the 1990s. With the lessons and experiences gained, vaccination plans were changed. Apart from MCV2 and MMR vaccines, a the campaign called School Vaccination Days (SVDs) was launched in which approximately 10 million children in primary education from grade 1 to 8 were vaccinated.19 Within the framework of the measles elimination programme, a vaccination campaign called Measles Vaccination Days (MVDs) was launched in 2005 throughout the country, providing catch-up vaccination for children aged between 9 months and 14 years and soldiers in the military.19

Turkey, which is located in the WHO European region, has yet not been able to eliminate measles.7

Elimination is defined as the absence of endemic measles virus transmission in a defined geographical area, such as a region or a country, for a period of 12 months or more in the presence of a well-performing surveillance system.20

According to the Centers for Disease Control and Prevention (CDC), when targeting elimination, even a case should be considered an epidemic.21

This situation in Turkey can be attributed to low vaccination rates and the excessive inward immigration in recent years.

In the current study, a strong negative relationship was found between MCV1 rates and number of measles cases. Most cases (85%) in European outbreaks in recent years are people who had not been vaccinated or were vaccinated as a single dose, such as those who refuse the vaccine, minorities, refugees, and the poor.6

The majority of cases seen in Turkey in recent years are unvaccinated children and children who have not reached the age of vaccination.19

In Turkey, MCV2 target vaccination rate could not be taken to the desired level, which is true of the entire European region.22

In Turkey, the incidence of measles in 2013 was quite high compared to WHO European Region and European Union countries. The reason for the high incidence can be attributed to inadequacy of measles elimination studies and high risk of exposure to imported virus due to inward migration.20

WHO targets for fighting against measles include increasing MCV1 rate to >90%, achieving 95% coverage in routine vaccination with two doses and sustaining it, complementary vaccination to sensitive individuals, and to keep the health professionals and the public informed.14

The Regional Verification Commission (RVC) of WHO commended in 2017 the efforts made by Turkey towards measles elimination.23

While the strength of the current study is its analysis of a dataset covering 60 years, the fact that the data could not be analysed with reference to socioeconomic variables is a limitation of the study.

There was a negative strong relationshiop between MCV1 rates and number of measles cases. Due to problems in school vaccination, rejection of vaccines and imported cases in Turkey, fresh measles outbreaks have occurred in recent years. Measles elimination target, as such, will have to be extended.