Objective: To analyse mutations in precore and core promoter regions of hepatitis B virus genome in chronic hepatitis B patients.

Conclusions: Basal core promoter and precore regions variants along with the preponderances of genotype D-specific mutations suggested a higher risk of hepatocellular carcinoma and poor clinical outcome in such patients.

Hepatitis B virus (HBV) infection is a global health problem that has affected millions of people with a significant proportion  in chronic stage as HBV carriers.1 Chronic HBV infection occurs in 20% of the infected patients and leads to severe consequences, like cirrhosis and hepato-cellular carcinoma.2 HBV infection is more common in  the Asia-Pacific region with high morbidity and mortality rates.3 Pakistan lies in the intermediate prevalence zone where the disease is highly endemic.4 HBV is a 42nm virus composed  of HBV core antigen (HBcAg) surrounded by a lipoprotein layer called HBV envelope antigen (HBeAg) that contains the HBV surface antigen (HBsAg).5 HBV genome consists of relaxed double-stranded deoxyribonucleic acid (DNA) with a size of 3.2kb.6,7 The genome has four overlapping open reading frames (ORF) that code for pre-surface/surface (Pre-S/S) antigens, Precore/core (PC/C) antigens, polymerase and X protein.6,7 HBV genome is susceptible to mutations as the viral DNA polymerase / reverse transcriptase has no proofreading ability.8 HBV genotypes have implications for HBeAg seroconversion, disease progression, occurrence of core promoter mutations and clinical outcome. Patients with genotype C and D infections have a lower rate of spontaneous HBeAg seroconversion, higher frequency of core promoter and pre-S mutations than those with genotypes A and B infections.9 Patients with C and D HBV genotypes also are at  higher lifetime risk of the development of cirrhosis and hepatocellular carcinoma than those with genotypes A and B.9 The most prevailing and clinically important  mutations are G1896A PC stop codon mutation and dual A1762T/G1764A mutation.10 Chronic HBeAg-negative hepatitis is prevalent in Mediterranean countries and a large number of infected individuals harbour basal core promoter (BCP) and PC mutations.11 Treatment with interferon and other drugs in patients infected with mutant viruses is hard due to a higher rate of relapse after treatment termination. A few studies in Pakistan have been conducted on the detection of genotypes and mutations using Line Probe Assay capable of only detecting the already known mutations.12,13 Another local study14 on the genotypes and BCP/PC mutations using restriction fragment length polymorphism reported genotype D as the prevalent genotype, but it is difficult to deduce that these mutations were not treatment-induced.

The current study was planned to analyse mutations in BCP and PC regions of HBV genome in chronic HBV patients.

The cross-sectional prospective study was conducted at the Centre of Biotechnology and Microbiology, University of Peshawar and PHRC Research Centre, Khyber Medical College Peshawar from June 2014 to June 2015. After approval from the institutional ethics review board, the sample size was estimated on the basis of 3% average prevalence of HBeAg positivity, confidence interval (CI) 95% and absolute precision 5% using a standard formula.15 The patients belonged to different ethnic groups of Pakistan. Those included were HBsAg-positive patients of either gender aged >15 years who were diagnosed at least six months previously and were untreated. The sample included patients who were both positive and negative for HBeAg. Patients having indication of previous treatment with antiviral or nucleoside analogues were excluded.

Sample preparation for nested polymerase chain reaction (PCR) was conducted at the PHRC Research Centre at Khyber Medical College, Peshawar, while nested PCR was carried out at the Centre of Biotechnology and Microbiology, University of Peshawar. Sequencing of PCR products was conducted at the Centre of Excellence in Molecular Biology, Lahore. Serum alanine aminotransferase (ALT) level, taken as a biochemical marker for liver injury,3 was determined using Innoline kit (Merck) as per the manufacturer’s instructions, with ALT level 0-40 IU/L being the standard reference range. Samples were screened for HBeAg and anti-HBeAg status qualitatively using ETI-EBK and ETI-AB-EBK enzyme immunoassay (EIA) kits (DiaSorin SpA, Italy), respectively, according to the manufacturer’s instructions.

The PC and BCP regions (1742-1900 bp) were analysed for mutation. Primers were synthesised through GeneLink, USA. The sequences of both inner and outer primers were the same as described in literature except for a single base (G-C) modification at nucleotide position 10 in reverse inner primer.16

A 50µl reaction volume for first-round PCR consisted of 5µl template DNA, 1µl (10µM) of each external primer and 25µl of PCR mix (Qiagen, Cat. no 203443) and 19µl ribonuclease (RNase)-free water. Amplification conditions comprised an initial heat activation of Taq DNA polymerase at 95oC for 15min, denaturation at 94oC for 1 min, annealing at 55oC for 1 min and extension at 72oC for 1 min for 35 cycles. Final extension was carried out for 10 min at 72oC.

First-round PCR product (1µl) was re-amplified using forward and reverse inner primers in a 50µl reaction mixture. The conditions of the amplification were maintained as in the first round except for the annealing temperature which was 50oC. The amplified product of 307 bp was checked through gel electrophoresis using 2% agarose gel. A 100 bp Ladder DNA (Thermo scientific) was used for size comparison (Figure 1). 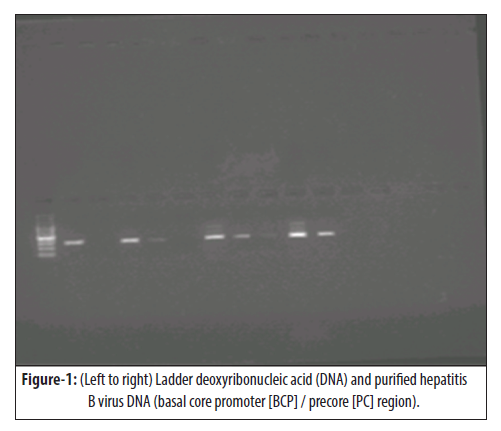 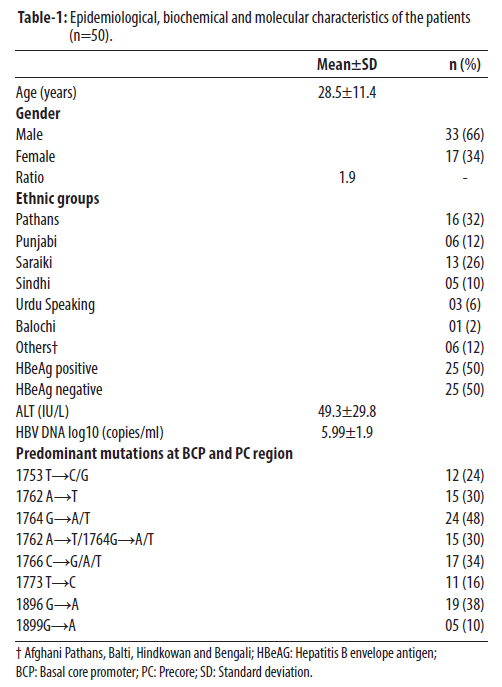 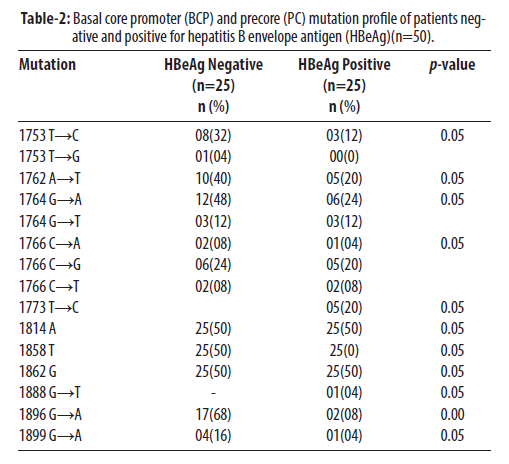 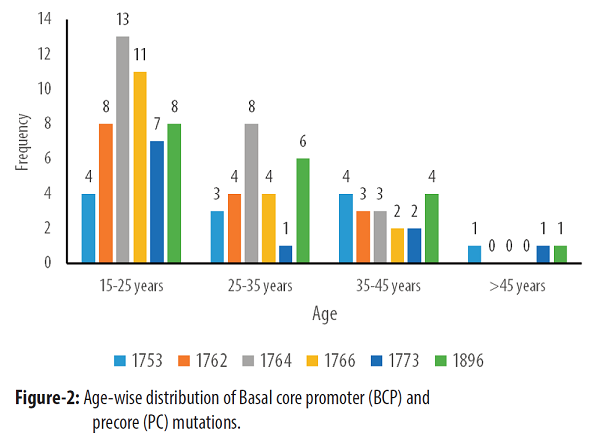 The BCP/PC sequences of all isolates were compared and a phylogenetic tree was constructed (Figure 3). 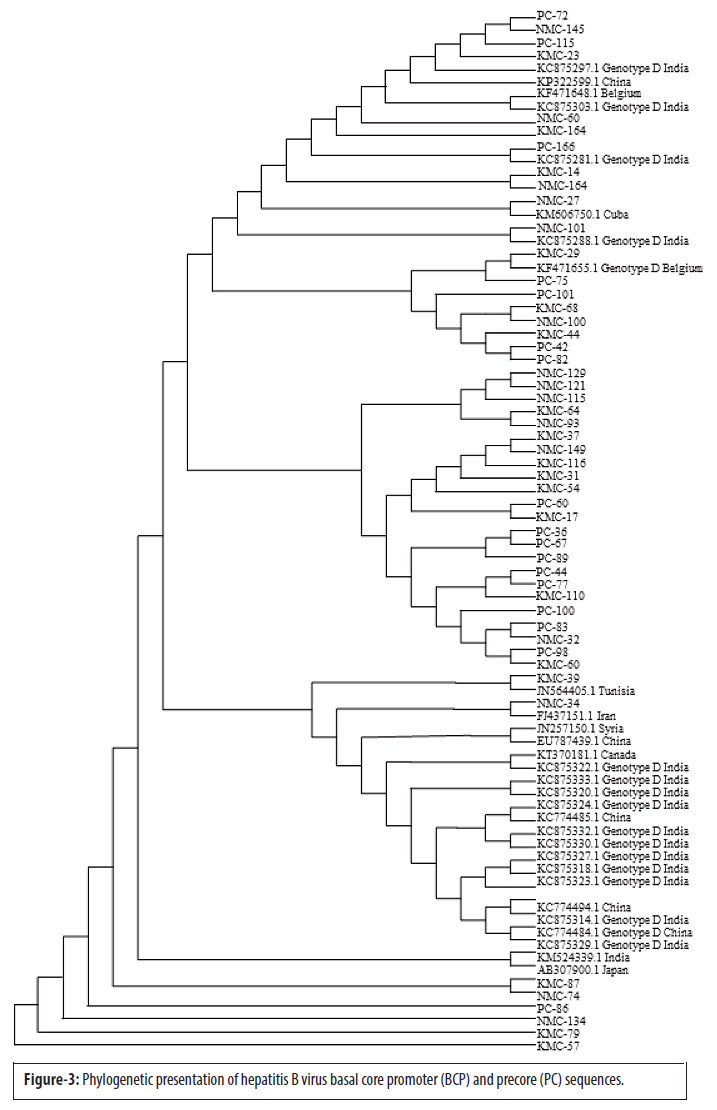 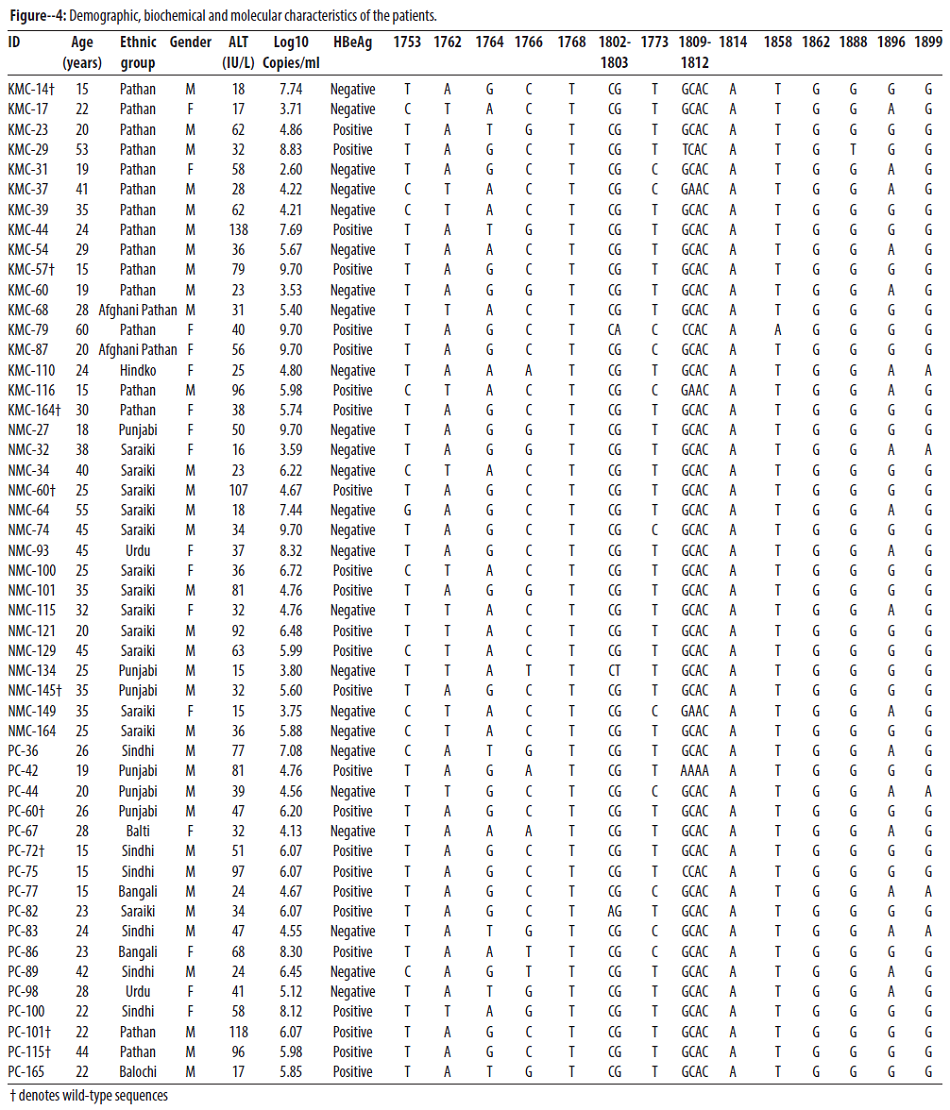 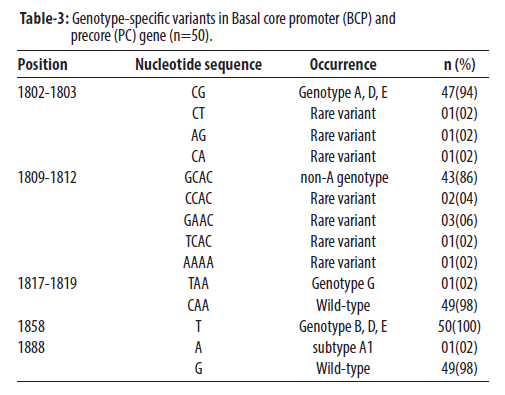 To our knowledge, the current study is the first to report direct sequence analysis of BCP and PC regions from Pakistan on the status of HBV mutations.

Majority of the patients were aged <45 years, suggesting a high HBV prevalence in younger age group in Pakistan which is in line with literature.12 Overall, a high frequency (38%) of 1896 (G→A) mutation was observed. This mutation changes codon 28 into a stop codon abolishing HBeAg expression. A study reported an overall 27% PC mutation frequency in HBV cases using line probe assay.12 A similar study  reported 18% frequency of PC stop codon mutation.13 The occurrence of HBeAg-negative status despite the absence of A1896 mutation in some samples, and occurrence of HBeAg-positive status in some samples with coexisting A1896 mutation suggests the existence of mixed viral infection where both wild-type and mutant viruses coexist.12 The reported prevalence of A1896 stop codon mutation varies from 12% to 85% in different studies.11-13,18-21 Geographical disparity in the prevalence of the PC mutants is genotype-dependent, which, in turn, is related to the existence or absence of C or T at location 1858.  PC mutation is confined to non-A genotypes harbouring thymidine at position 1858 which base pairs with A1896 and stabilises the encapsidation signal epsilon required for viral replication.20 On the other hand, the presence of cytosine at position 1858 in genotype A precludes the emergence of the A1896 mutants since C forms a wobble pair with A at position 1896 and destabilises epsilon, consequently decreasing replication capability.8 Owing to a single mutation requirement needed for epsilon stability, the emergence of A1896 PC variant is mostly common in HBV genotype D; the leading genotype in the Mediterranean region, followed by genotypes B and C in Japan and Southeast Asia, and is occasionally detected in genotype A which is the most common type in North America and northern Europe.21

In the current study, all samples harboured thymidine at position 1858 which speculates the preponderance of genotype D in Pakistani patients, as has been previously reported.12,13 A study reported T1858 nucleotide among all D genotype samples.20 Cytosine at position 1858 primarily exists in genotype A and is common in sub-genotype C1, but not in C2.22 A1896 and A1899 simultaneous mutations were detected in 5(10%) of the isolates and 4 of these belonged to HBeAg negative samples. It is worth mentioning that all the samples having G1899A mutation had a G1896A coupled mutation and no A1899 was found alone. A more severe disease progression has been reported in HBV patients harbouring A1896 and A1899 double mutation, but not in patients with only A1896 mutation.23 Another study reported the presence of A1896 and A1899 double mutation in 26% inactive carriers and 44% chronic hepatitis patients.2 A significantly higher frequency of this double mutation has been reported in genotype D6 compared to other sub-genotypes of D.24 Like the existence of genotype-specific variant T1858 in all samples, loci 1814 and 1862 were highly conserved having A1814 and G1862 in all the isolates except for the presence of T1888 instead of G1888 in one sample. Genotypes A, C and D differed signiﬁcantly in terms of G1862T and T1858C variations where the existence of T1858 was associated with genotype D and T1862 and C1858 variants were highly prevalent in genotype A.25 G1862T mutation has been suggested to interfere with the cleavage of signal peptide and contributes to HBeAg phenotype.18 The diminished replication ability of genotype A is attributed to G1862T mutation and the inhibitory effect of G1862T on genome replication is relieved by G1899A mutation which restores core protein expression.26

The double 1762/1764 mutation (1762 A→T /1764 G→A/T) in BCP region was detected in 15(30%) patients, which is in accordance with a study in India which reported 32% frequency.21 In another report, relatively higher incidence of paired 1762/1764 mutation was reported in isolates with genotypes A (64%) and C (66.7%), while the lowest frequency (30.5%) was detected among genotype D patients.25 A rare G1764T mutation was detected for the first time in 12% of the studied isolates which has been previously reported from Tunisia with 3.4% frequency in genotype D7 and 19.5% frequency in genotype D1.27 The frequency of double mutation at 1762/1764 was not statistically different between HBeAg-positive and HBeAg-negative isolates, as stated by others.22 However, some studies have reported the association of T1762/A1764 double mutation more with HBeAg-negative than with HBeAg-positive phenotypes.2

Although the pre-S and S regions, important for genotyping, were not sequenced, genotypes of the isolates were speculated on the basis of BCP/PC region sequencing using two approaches. These approaches involved genotyping on the basis of genotype-specific variation in the BCP/PC regions and utilising maximum identity scores of the studied sequences with all the NCBI GenBank database17 sequences of HBV genotypes with the help of BLAST software. Based on these comparisons, the speculated predominant genotype among the studied isolates was the D genotype, which has been reported previously as well.12,13 Phylogenetic tree of the study isolates with known sequences from GenBank17 showed that majority of our samples belonged to genotype D isolates from India, Turkey, Tunisia, China and Iran. Sequence analysis of genotype-specific loci and phylogenetic analysis speculates that majority of our isolates belonged to genotype D. Owing to the occurrence of genotype D specific mutations/variants, such patients have lower chances of spontaneous HBeAg seroconversion, higher frequency of BCP mutations than PC mutations and increased lifetime risk of cirrhosis, HCC and poor treatment outcome.

The prevalence of PC stop codon mutation G1896A was higher in HBeAg-negative samples than in HBeAg-positive samples. The existence of wild-type sequences in majority of isolates at genotype-specific loci suggested genotypic stability in the studied population. BCP region showed more variation than PC region, highlighting the risk of hepatocellular carcinoma in these patients.

Source of Funding: Access to Scientific Instrumentation Programme of the Higher Education Commission (HEC) of Pakistan.