Child physical abuse: awareness and practices of medical and dental doctors in Pakistan

Objective: To determine the awareness and practices of doctors and dentists in detecting and reporting suspected cases of child physical abuse.

Methods: The cross-sectional study was conducted from November 2017 to June 2018 at the Hamdard College of Medicine and Dentistry, Karachi, and comprised doctors and dentists practising in public and private hospitals across Pakistan. Data was collected using a predesigned questionnaire to assess knowledge of the social indicators of child physical abuse, response to child physical abuse, and actions taken by the professionals when they believed a child abuse case had been detected. Data was analysed using SPSS 22.

Conclusion: Although doctors and dentists had a positive attitude regarding child physical abuse, the majority preferred to remain silent in suspected cases.

Child abuse is a state of mental, physical, economic and sexual abuse to a person aged <18.1 Child physical abuse is known as a global phenomenon with a serious impact on the physical and mental health, well-being and growth of children over their lifetime and by extension on society as a whole. Therefore, individual interpretation and definition of violence affect the identification and documentation of physical abuse. The World Health Organisation (WHO) estimates that worldwide in 2014, 23% children were physically abused.2 Child Protective Service (CPS) agencies in the United States have investigated more than 2 million cases of suspected child abuse; of them 18% were physically abused, more than 650,000 children were found to be perpetrators of maltreatment, and >1,500 child deaths were traced annually to child abuse or neglect.3

A research on child abuse found that 72.2% children in India were physically abused1.  Reports from Afghanistan,4 Sri Lanka4 and Malaysia5 have reported a high incidence of child abuse. In Karachi, the incidence ranged between

Medical and dental practitioners may play an important role in recognising and documenting child physical abuse incidents. The Child Maltreatment Registry based in a Saudi Hospital found head trauma to be the most common type of injury caused by physical child abuse.9 Therefore, they are in a distinct position for assessing physical child abuse as 50% of injuries occur in the head and neck region.10

Many studies have been examining the awareness and attitudes of doctors around the world regarding child physical abuse.11-14 Studies from different parts of the world have shown that healthcare providers do not disclose reported cases of abuse primarily due to lack of knowledge.15,16

In the United States, all staff in direct contact with children, such as teachers, social workers and healthcare providers, are required to report all alleged cases of abuse to the appropriate child protection agency within their member states.17 The European Union has ordered that staff in close contact with children would report to the competent legal authorities alleged cases of abuse. However, more than half of these countries allow citizens to report these cases to the authorities, but without any legal obligation under European regulations.18 In countries like Jordan, only healthcare workers are required to report reported cases of abuse to the police or the national hotline for abuse of children.19 It is obligatory for education and healthcare sectors in Saudi Arabia to report alleged cases of child abuse to police.20 The standard of medical education is therefore, an important aspect.

Child maltreatment is a public health problem with lifelong health consequences for survivors and their families.21 Children who have been neglected have poor effects on their health, and there is evidence that early traumatic childhood experiences contribute significantly to several adult diseases.22 The current study was planned to establish medical and dental practitioners’ knowledge and practices in identifying and reporting suspected cases of physical abuse of children.

The cross-sectional study was conducted from November 2017 to June 2018 at the Hamdard College of Medicine and Dentistry, Karachi, and comprised medical and dental practitioners in public and private hospitals in Karachi, Lahore and Quetta. After approval from the institutional ethics review committee, the sample size was calculated with 95% confidence interval (CI), 5% margin of error and 50% anticipated prevalence.  However, keeping in view possible non-response, the sample size was inflated by 10%. The sample was raised using non-probability convenience sampling technique from among medical and dental practitioners with at least one-year experience who volunteered to participate. Non-practicing health professionals, those with <1 year experience and those not willing to participate were excluded.  The data was collected using a predesigned self-administered questionnaire based on previous studies10,11,19,23 while additional questions were included to collect further information. The questionnaire was reviewed by a medico-legal doctor with field knowledge. Four sections were included in the final questionnaire. The first section related to demographic and basic characteristics, while the second section contained multiple-choice questions (MCQs) about knowledge of child physical abuse. The third section assessed the attitudes of the participants towards child physical abuse using a five-point Likert scale ranging from ’strongly disagree’ = 1 to ‘strongly agree’ = 5. Opinions regarding the main causes of underreporting of child physical abuse cases among doctors were also asked. The last section asked about the reporting behaviours of the participants and the actions they would take if they suspected that a child was facing physical abuse. Additionally, the questionnaire also evaluated institutional behaviours and the availability of clear procedures for doctors to follow in cases of child physical abuse.

Each doctor was approached individually and they were encouraged to give their responses in an unbiased manner. In case of missing data, the doctors were contacted again at the earliest and details were rechecked.

Data was analysed using SPSS 22. Chi-square test was used to assess the relationship between male and female doctors with knowledge regarding child physical abuse. P<0.05 was considered statistically significant. 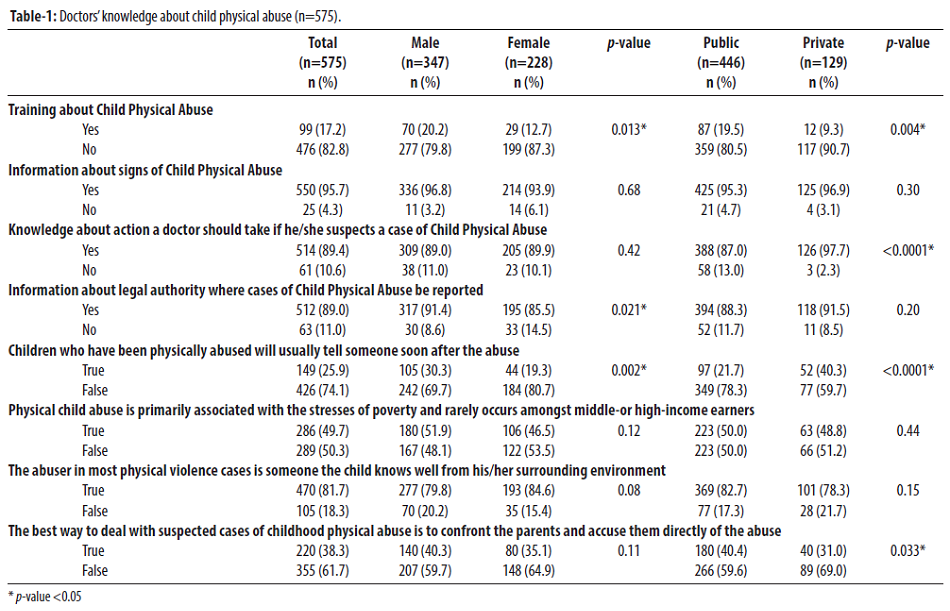 Regarding signs of child abuse, 462(80%) professionals pointed out contusions, 283(49%) burn marks, 264(46%) broken teeth and 252(44%) said head injury.  A huge majority 514(89%) of the professionals showed the correct behaviour if they believed that a child was physically abused.  There were significant differences in this regard between professionals at public and private hospitals (p<0.05). Also, 317(91%) males knew about the legal authorities where cases of child physical abuse wre to be reported (p<0.05).

Most of the respondents 564(98%) agreed about the importance of detecting and reporting child physical abuse cases; 558(97%) agreed that doctors had an important role in this regard; 507(88%) reported having detected child physical abuse cases and 529(92%) pointed out the need to have the required training to detect such cases.  Overall, 80(14%) doctors said they had enough knowledge about physical child violence in medical/dental schools (Table 2).

Fear of response from family members, especially parents, was the leading cause of physical abuse underreporting in 339(59%) cases, followed by lack of knowledge related to the referral procedures in 298(52%) cases (Figure 1). While 450(78.3%) subjects strongly agreed on the value of identifying and documenting child physical abuse, 336(58%) did not take any action in suspected cases (Figure 2). The mean age of the doctors in the study was 33.5 years with 60:40 male-female ratio. A recent study on the matter had a mean age of 38 years and had 52.6% male doctors.24 Several studies regarding opinion about child physical abuse were conducted exclusively either on physicians24,25 or dentists9,11 the present study included professionals from both the fields.

Among different clinical signs of child abuse, skin bruises were mentioned by 462(80%) doctors, followed by burn marks 283(49%), broken teeth 264(46%) and head trauma 252(44%). A study showed that skin bruises and burns were the most frequent and noticeable injuries of physical abuse of children.26

There were 240(42%) professionals willing to refer the suspected cases to legal authorities compared to 50%,9 84%11 and 22%24 found by other studies.  The current study had 340(59%) professionals saying they should report under all circumstances even if abuse was only suspected. In comparison, a study showed insufficient knowledge under which a suspected child abuse case should be identified.9

As for social indicators of physical abuse in children, 426(74%) subjects did not agree with the fact that children who are abused disclose it immediately after the event.  Studies in Saudi Arabia (73%)11 and Jordan (56%)23 revealed similar results. In the current study, 288(50%) doctors agreed that physical child abuse was associated with stressors due to poverty and rarely occurs amongst middle or high-income earners. Ironically, studies in Saudi Arabia (75%),11 the United Arab Emirates (UAE) (60%)14 and Jordan (60%)19 wrongfully thought violence was only related to poverty and low socioeconomic status. The current study’s findings related to the best way of addressing suspected cases of childhood physical abuse were similar to earlier findings.1

More than 450(98%) participants in the current study were overwhelmingly positive in their outlook towards the role of the doctors in the identification and reporting of child physical abuse. This is in line with similar findings in studies done in Saudi Arabia,11 Scotland,12 Jordan23 and Greece.27 The study found that physical abuse of children was not properly taught in medical and dental schools, and that also has been reported earlier.11,14

The reason given by doctors for not disclosing alleged cases of abuse was primarily fear of family and parental rage 339(59%), and lack of knowledge of referral procedures 298(52%). Several reports have demonstrated similar results.9,11,19,23

In cases of alleged child abuse, only 80(14%) participants asked children or their parents to record signs and symptoms of the actions taken by the physicians. Suspicion for physical abuse was reported in child’s file by 75(13%) participants, monitoring the suspected case during following visits was done by 45(8%) and only 39(7%) reported suspected cases to the legal authorities.  Other studies have shown similar results.9,13

The limitations of the current study include the lack of participation by senior doctors.

Awareness and knowledge levels among the professionals was sufficient with regard to child physical abuse. However, when it came to taking action, many of the subjects did not take any action in suspected cases, primarily because of fear of dissatisfaction on the part of parents and their families and lack of knowledge about referral procedures.