Ratio of height to thyromental distance: a comparison with mallampati and upper lip bite test for predicting difficult intubation in Pakistani population

Objective:  To compare the accuracy of three diagnostic tests in predicting difficult laryngoscopy using Cormack and Lehane grade as the gold standard.

Methods: The cross-sectional study was conducted at the Aga Khan University Hospital, Karachi, from August 2014 to August 2015, and comprised patients who required endotracheal intubation for elective surgical procedures. The primary investigator used ratio of height to thyromental distance, upper lip bite test and the modified Mallampati test for assessing the airway correlated with laryngoscopic view based on Cormack and Lehane grading. Data was analysed using SPSS 19.

Conclusion: RHTMD and ULBT both are acceptable alternatives for prediction of difficult laryngoscopy as a simple, single bed-side test.

During general anaesthesia, the significance of successful intubation in airway management can be compared to the letter “A” in the English language; both are a vital initial step. Failure to intubate and secure the airway can lead to devastating consequences. Among the reasons of difficult or failed intubation, inability to anticipate a challenging airway remains one of the most important causes.1 Reported incidence of challenging laryngoscopy varies between 1.5% and 18%2 and represents 27% of harmful respiratory events.3 Cormack and Lehane (CL) grading of laryngoscopic view has been used as the gold standard as it provides direct visualisation of glottic structures. It has four grades, with grades 1 and 2 indicating easy laryngoscopy and intubation, while grades 3 and 4 indicate difficult laryngoscopy.4 According to a study5 sensitivity, specificity and positive predicted values (PPVs) for CL grades 1 and 2 were 100%, 22.3% and 83.2%, whereas for grades 3 and 4 the corresponding values were 100%, 96.7% and 30.4%.

The Mallampati test originally described had shown sensitivity up to 50% and specificity of 100% to predict a difficult airway.6 However, there were some controversial issues viewed in some of the subsequent larger studies.7,8 Lundstrom et al. conducted an extensive meta-analysis on 177,088 patients in 55 studies and concluded that the prognostic value of modified Mallampati test (MMT) was worse than that previously estimated with sensitivity of 35% and specificity of 91% thus proving it to be inadequate as a stand-alone test.9 Furthermore, accuracy of this test may potentially vary in different ethnic groups, like Asian versus Caucasian,10 gender or pregnancy.11

The upper lip bite test (UBLT), as the name suggests, is a manoeuvre that enables the lower incisors to bite and cover mucosa of upper lip. It is a relatively newer bedside test that simultaneously assesses jaw subluxation and buck teeth.12

Recently, the ratio of height to thyromental distance (RHTMD) test, introduced by Schmitt13 has been found to have higher sensitivity (65%) and specificity (82%).14

The current study was planned to compare the diagnostic accuracy for RHTMD, MMT and ULBT in predicting difficult laryngoscopy, taking the CL grading system as the gold standard.

The cross-sectional study was conducted at the Aga Khan University Hospital, Karachi, from August 2014 to August 2015. The sample was raised using consecutive sampling techniques after approval from the institutional ethics review board. Those included were adult patients classified as American Society of Anaesthesiologists (ASA) grade I-III planned for elective surgeries under general anaesthesia requiring endotracheal intubation. Patients who had limited mouth opening, past record of burns or airway injury, inability to stand erect or sit, edentulous, tumour or mass in cervical, facial regions, limited cervical movement, like rheumatoid arthritis and cervical disc disorders, pregnancy, gastro-oesophageal reflux disease, morbid obesity, incomplete fasting or requiring rapid sequence induction, or those requiring intubation method other than conventional laryngoscopy, like fibre-optic intubation, and emergency surgeries were excluded.

Preoperatively, the primary investigator, who was not involved in performing laryngoscopy or intubation, performed MMT, ULBT and measured the thyromental distance (cm) and height (cm) in the wards or in the pre-operative holding area.

MMT was used to identify the oropharyngeal structures for grading purposes. It was performed while having the patients seated in a neutral position and asking them to open their mouth wide and to protrude their tongue as much as possible without producing phonation. Based on the findings of MMT, patients were graded into four groups.15 Grade I meant complete visualisation of soft palate along with fauces, uvula, and pillars; grade II meant complete visualisation of the uvula; soft palate along with major part of uvula and faucial pillars clearly visualised; grade III meant visualization up till base of uvula only with soft palate visible; and grade IV meant only hard palate was visualised and no part of the soft palate was seen.

Easy laryngoscopy was expected in patients with grade I and II, whereas grades III and IV were predicted to have a difficult laryngoscopy.

To assess the degree of jaw protrusion, ULBT was performed in all patients by asking them to clasp the upper lip with their lip incisors. Based on the findings, the patients were categorised into three grades.

Based on the findings, easy laryngoscopy was expected in patients with grades I and II, whereas grade III predicted difficult laryngoscopy.12

All assessment findings of each patient and demographic variables were documented on a study proforma.

Routine monitoring was performed in an operating room (OR) with non-invasive blood pressure, along with electrocardiogram and oxygen saturation. The patient was pre-oxygenated with 100% oxygen for 3 minutes. An anaesthetist, excluding the primary investigator, performed laryngoscopy and intubation. The induction technique and type of non-depolarising muscle relaxant were at the discretion of the primary anaesthesiologist. Anaesthesia was maintained by using oxygen and nitrous oxide with isoflurane, and ventilation of the lungs was done by bag-mask for 3 minutes until the patient was completely paralysed. Laryngoscopy was done with a size 3 or 4 Macintosh laryngoscope blade by an experienced anaesthesiologist. The structures seen on the preliminary laryngoscopic attempt were categorised as per CL grading,4 without any external laryngeal manipulation. The findings were documented on the proforma as grades I to 4. Grade 1 meant completely visualised glottis; grade 2 meant partially visible glottis with anterior commissure not being visualised; grade 3 meant no structures other than epiglottis were visualised; and grade 4 meant no structures were seen, meaning the epiglottis was not visualised.

Grade I-II were documented as easy laryngoscopy, whereas III-IV were marked as difficult laryngoscope.

The sample size was calculated while assuming the incidence of difficult laryngoscopy to be 15%, power of the test >95% to detect and calculate the discriminating power based on area under receiver operating characteristic (AUROC) curve of an absolute value of 15% from 50% to 65% along with 5% type I error at two-sided substitute supposition.16,17 The sample size was calculated using the  OpenEpi online calculator.18

Data was analysed using SPSS 19 and PASS 11.04. Quantitative findings, like age, weight, height and TMD, were presented as mean and standard deviation.17 Frequency and percentage were computed for qualitative variables, like gender, ASA status, and difficult laryngoscopy.  Normality of the continuous variables were checked by Kolmogrove-Smirnov and Shapiro-Wilk test. An independent sample t-test was employed to compare the mean difference, while chi-square test was applied to compare the proportion difference between difficult and easy laryngoscopy intubation. Sensitivity, specificity, PPV, negative predictive value (NPV) and accuracy were computed for MMT, ULBT and RHTMD while keeping CL grades as the gold standard. The specific area under the curve (AUC) analysis was also performed, with a value of 0.5 under the ROC curve showing the variable performs no better than chance, and a value of 1.0 implying perfect discrimination.  Stepwise multivariate logistic model was used to predict adjusted odds ratio (AOR) and significant contribution of the predictors. P<0.05 was taken as significant. 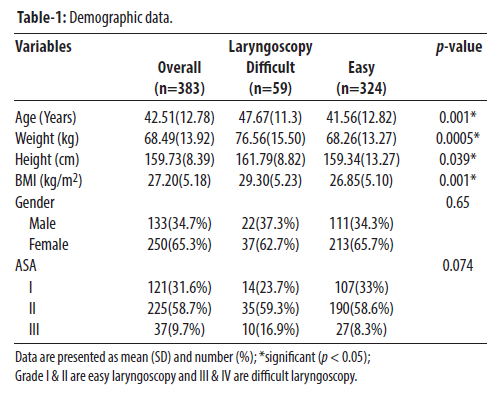 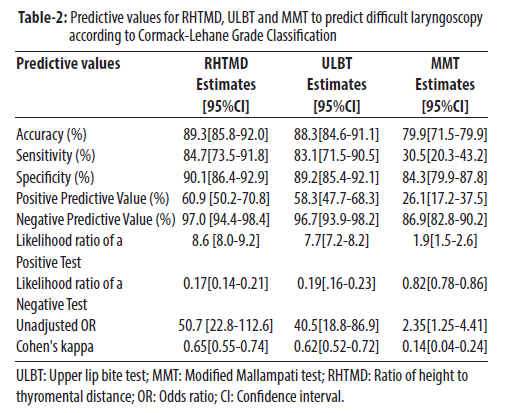 The AUC of ROC for ULBT and RHTMD was significantly higher compared to MMT (p<0.01) (Figure). 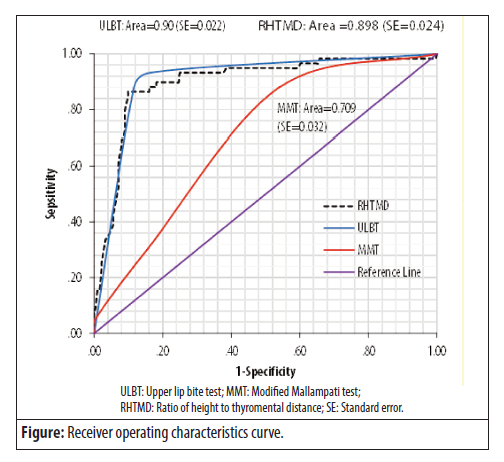 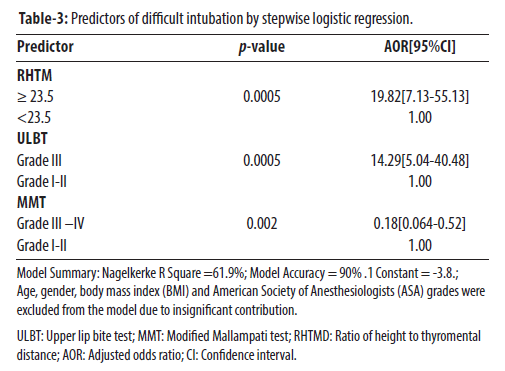 Since the inception of anaesthesia, maintenance of oxygenation and the establishment of a secure adequate airway has been the most important task for anaesthetists. Despite advances in airway management, unexpected difficult laryngoscopy or failed intubation can not only lead to life-threatening, anaesthesia-related mortality and morbidity, but also prove to be one of the main sources of legal issues and economic burden for hospitals.3

In literature, difficult laryngoscopy frequency varies from 1.5% to 18%.1,12,17,19 and this variation has been proposed to be multi-factorial, like differences in patient’s race or ethnicity,10 non-uniformity in reference standard for grading the difficulty of laryngeal view, laryngoscopic attempts20 and the use of backward upward rightward pressure (BURP) manoeuvre.12

As the current study exhibited, the frequency to be 15% although comparable to some studies17,21 yet it is higher compared to others with frequency of 5%, 6.8%,16 and 10.9%.18 The probable reasons for higher frequency in the current study can be attributed to our restriction of laryngoscopic view to the first attempt only, and that is also without application of any external manoeuvre or BURP.

The sensitivity, specificity, PPV, NPV and accuracy of RHTMD and ULBT were comparable in our study, and they were higher than MMT. Overall, the results are comparable to similar studies.17,22

RHTMD is based on patient’s height and TMD. Low inter-observer variations have been shown for RHTMD test16 compared to MMT and ULBT. The ULBT has the superiority of assessing jaw subluxation and the presence of buck teeth concomitantly, thereby enhancing its predictive value and reliability. An ideal preoperative evaluation for airway assessment and challenging laryngoscopy should be highly sensitive and specific with increased PPV. This was reflected in RHTMD and ULBT in the current study.

The anaesthetists recording CL grade in our study were intentionally kept uninformed of the ULBT and RHTMD assessment done by the primary investigator prior to laryngoscopy. The reason for using the blinded method was to reduce observer bias.

The ULBT score has certain limitations, as it cannot be performed on edentulous patients and it may not be applicable to some population groups23 because of racial variation in craniofacial structure as well as mandibular and maxillary morphology and morphometry.

Regarding MMT, the sensitivity in the current study was low at 30.5% compared to a few earlier studies12,17 but it was comparable to others24,25 that were done in Asian populations. The absence of inter-observer variability, which is a strength of the current study, may also be attributed as the cause of decreased sensitivity in the investigation. Even though the internal validity and reliability of the current study seem adequate as all three preoperative airway assessment tests were done by the primary investigator, but the study was carried out in elective surgical patients, and emergency patients were excluded. As such, the results may not be applicable to patients presenting for emergency caesarean sections, edentulous patients, and, particularly, to those who present with obvious airway difficulties in emergency situations. We recommend the need for further studies to be done in specific population groups to validate the current findings, and to determine an optimum cut-off value of RHTMD specific to Pakistani population.

RHTMD and ULBT showed more accuracy compared to MMT. RHTMD was comparable with ULBT and can be used reliably as a bedside screening test for preoperative prediction of difficult laryngoscopy in the general population.

16.    Safavi M, Honarmand A, Zare N. A comparision of the ratio of patient’s height to thyromental distance with the modified Mallampati and the upper lip bite test in predicting difficult laryngoscopy. Saudi J Anaesth 2011; 5: 258-63