Objective: To see the efficacy of rapid colour test for the sensitivity of ceftriaxone against clinical isolates of salmonella typhi.

Methods: The cross-sectional validation study was conducted at the Department of Microbiology, Pakistan Navy Ship Shifa Hospital, Karachi, from Nov 2018 to April 2019, and comprised clinical isolates of salmonella typhi that were obtained from five different hospitals in Karachi and Hyderabad. The isolates were tested using the rapid colour test. All the isolates were also tested using the conventional disc diffusion method and minimum inhibitory concentrations on the Vitek-2 version 8.01.

Conclusion: The colour test was found to be a rapid, accurate and inexpensive tool to screen for ceftriaxone resistance in typhoid-endemic areas.

Typhoid fever is a constant public health challenge in developing countries usually transmitted through consumption of contaminated food and water. It is caused by bacterium salmonella enterica serovar typhi (S. typhi). Humans are the only hosts for S. typhi and this gram-negative bacterium is transmitted through the faeco-oral route.1 According to recent estimates, around 21 million cases of typhoid occur annually with approximate 222,000 deaths.2 In Pakistan, it is the most common disease in children aged <15 years, with very high infection rates in cities like Karachi and Hyderabad.3 Residents of Sindh and Punjab provinces are at highest risk of developing this disease.4

After the emergence of resistance to fluoroquinolones, parenteral ceftriaxone / cefotaxime or oral cefixime injectable third-generation cephalosporin has remained the drug of choice for empirical treatment of typhoid fever, especially in the southeast Asia region. Multidrug resistant (MDR) strains of S. typhi are a public health concern in Pakistan, especially in Karachi.5 The first case of S. typhi resistant to ceftriaxone was reported from Bangladesh in 1999.6 In Pakistan, ceftriaxone remained the drug of choice for complicated enteric fever cases till November, 2016, when an outbreak of ceftriaxone-resistant typhoid cases was reported in Sindh; predominantly from Hyderabad and Karachi.7,8  A total of 8405 enteric fever cases were reported from different cities of the province from November 2016 to Dec 30, 2018. Out of these, 5418 were infected with ceftriaxone-resistant S. typhi and this outbreak is still not over. Strains resistant to first-line drugs, including ampicillin, chloramphenicol, trimethoprim-sulfamethoxazole, fluoroquinolones and ceftriaxone, are considered extensively drug resistant (XDR) S. typhi strains.

It was confirmed by whole-genome sequencing of XDR S. typhi strains that these harbour a plasmid encoding resistance genes, including the beta lactamase cefotaxime (blaCTX-M-15) extended spectrum beta-lactamase (ESBL) and quinolone resistance gene (qnrS). It was suggested that an MDR H58 clone acquired an ESBL plasmid from an escherichia (E.) coli or an enteric bacterial donor.9-11 For most of XDR typhoid cases, the only oral antibiotic available with known efficacy is azithromycin, which is a broad-spectrum macrolide antibiotic used to treat patients with suspected uncomplicated typhoid fever. Patients with severe or complicated typhoid fever are treated with injection meropenem. Other potential treatment options include imipenem-cilastatin combination, tigecycline, piperacillin-tazobactam, ceftazidime-avibactam, fosfomycin, and colistin. However, there is limited experience and evidence on their efficacy in XDR typhoid cases. Their cost would also be a limiting factor for their use as routine drugs to treat typhoid fever cases in developing countries.12,13

Due to this public health alarming situation, the National Institute of Health (NIH), Pakistan, also published an advisory for the prevention and treatment of XDR typhoid cases in 2018.14 Some hospitals in Pakistan have also published local guidelines for empiric treatment of typhoid fever. Due to high prevalence of XDR typhoid cases in Sindh, especially in complicated cases, ceftriaxone cannot be used for enteric fever empirically, while widespread injudicious use of azithromycin and meropenem can lead to the development of resistance to these antibiotics as well. Strains resistant to azithromycin have already been seen in south Asia.14 Routine S. typhi antimicrobial susceptibility testing methods take at least 48-72 hours.15 This can lead to injudicious use of both meropenem and ceftriaxone in patients requiring admission. There is a need to develop a rapid and cost-effective method for rapid detection of ceftriaxone resistance in XDR typhoid endemic areas. The current study was planned to develop a rapid colour test to check ceftriaxone resistance in clinical isolates of XDR S. typhi.

Clinical isolates of S. typhi and one ATCC 25922 E. coli strain was evaluated. These isolates were collected from five different hospitals in the two major cities of Karachi and Hyderabad. All the isolates were sub-cultured on 5% sheep blood agar and sensitivity to ceftriaxone was performed by disc diffusion method, as recommended by the Clinical and Laboratory Standards Institute (CLSI) in 2019.17 Minimum inhibitory concentrations (MICs) were determined by ceftriaxone E-test (MIC range 0.016-256ug/ml, Oxoid, UK) and Vitek-2 system (updated 8.01 version, Biomerieux, France). The Vitek-2 system uses breakpoints according to CLSI 2016 version (≥4 resistant for ceftriaxone). The results of these MICs are shown in technical appendix table 1.18 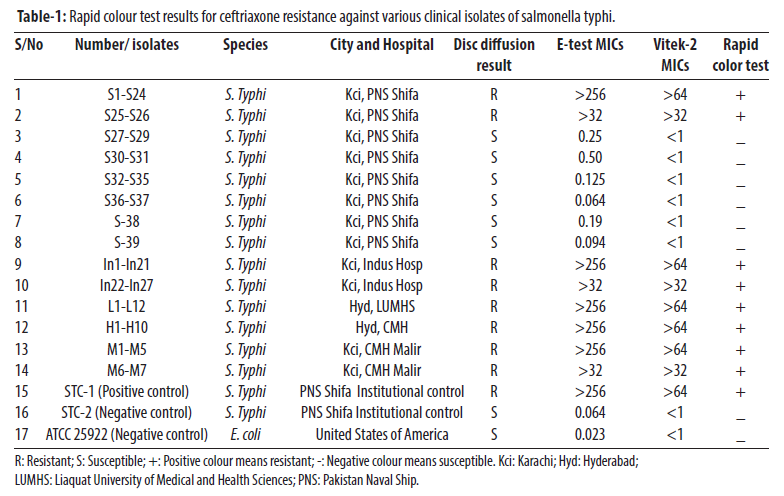 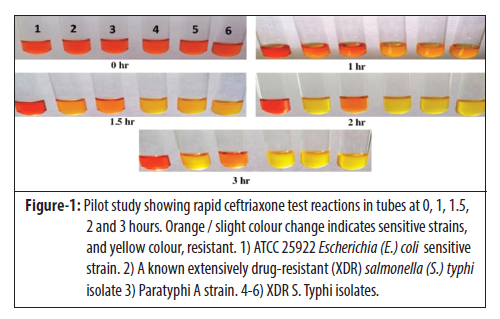 The results were readable at 1.5h, but all the test tubes produced best appreciable results at 2h. These test isolates were not included in the main study.

The rapid ceftriaxone test was conducted in a 96-well polystyrene microtiter plate (sterile, round-bottom, Thermo Fisher Scientific, United States). For the isolates, 0.2ml ceftriaxone from the stock solution was added in 19.8ml MHB solution to make a concentration of 10ug/ml. From this solution, 150ul was dispensed in the respective microtitre wells. Besides, 50ul of the bacterial suspension was added in the respective wells so that the final concentration of ceftriaxone in each well was 7.5ug/ml and the final concentration of bacteria was 108 CFU/ml. After inoculation, the tray was gently kept in an incubator at 35±2oC without being sealed for free flow of oxygen. The tray was read at 15 minutes for any spontaneous change in colour and then at 1, 1.5, 2 and 3 hours. No change in orange colour or slight change in colour was considered negative, meaning ceftriaxone-sensitive, while change in colour from orange to yellow was considered positive, meaning ceftriaxone-resistant, that is growth of organisms in the presence of the drug (Figure 2). 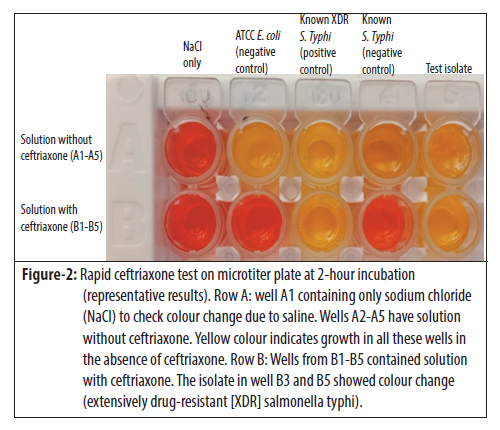 Out of total 82 ceftriaxone-resistant clinical isolates, excluding one positive control S. typhi, 79(96.3%) gave appreciable reaction (from orange to yellow) at 1.5 h while 2(2.4%) produced reaction at 2 h. At 3 h, the yellow colour change became deeper. There was only 1(7%) ceftriaxone-sensitive isolate which showed slight change in colour at

2 h. The isolate was retested by colour method with no colour change on repetition. There was only 1(1.2%) ceftriaxone-resistant isolate which showed variations in MICs >12 on E-test and >8 on Vitek, but these MICs were in the resistant range.

To the best of our knowledge, the current study is the first on colour test for rapid detection of ceftriaxone resistance against clinical isolates of XDR S. typhi. A study was done based on the principle of organism metabolism and subsequent colour change due to change in pH was conducted using the Nordmann and Poirel (NP) test.19 The study evaluated rapid detection of polymyxin resistance against various isolates of enterobacteriaceae. Sensitivity and specificity of rapid NP test was 99.3% and 95.4% respectively when compared with the standard broth micro-dilution method.18 Subsequently, more studies were published based on the rapid NP colour test for polymyxin resistance against various enterobacteriaceae isolates.20,21

Ceftriaxone has been used as drug of choice for the treatment of MDR isolates of S. typhi, especially in typhoid-endemic countries. However, the outbreak of XDR S. typhi in Sindh has questioned the use of this drug empirically. Most of the confirmed cases of XDR typhoid are treated with injection meropenem in combination with oral azithromycin. Use of mereopenem empirically can also lead to the development of resistance against this last-resort antibiotic. The Sanford guide of antimicrobial therapy has recommended injection meropenem usage for complicated or severe infections in XDR endemic areas.22,23

The rapid colour test for ceftriaxone resistance is easy to perform and does not require any sophisticated equipment or expertise. The test is performed on colonies grown on non-inhibitory media, such as sheep blood agar. In routine practice, this test can be performed using simple sterile test tubes, and results can be achieved and communicated in just 2 hours. In the current study, there was only one isolate, which produced a weak colour change, but, on repeat testing, there was no colour change (negative test). A weak colour change should be taken as negative.20

The ongoing outbreak of XDR S. typhi is so far limited to Sindh and all efforts are being made to control its spread. The colour test has utility in areas facing the threat of XDR typhoid, but it is believed that these strains may spread to other areas as already cases of XDR S. typhi have been reported in the United Kingdom and the United States possibly owing to people travelling from Pakistan.24

The colour test was found to be a rapid, accurate and inexpensive tool to screen for ceftriaxone resistance in typhoid-endemic areas.  The use of this test might contribute to an early initiation of appropriate antibiotic therapy.

8.      Yang YA, Chong A, Song J. Why Is Eradicating Typhoid Fever So Challenging: Implications for Vaccine and Therapeutic Design. Vaccines (Basel) 2018; 6: 45.

Clinical profile and screening of exon 6 and 14 of ABCB4 gene in obstetric cholestasis patients at a tertiary care hospital in Rawalpindi, Pakistan