Methods: This in-vivo, cross sectional study was conducted in the department of Operative Dentistry from 20th February 2019 to 25th June 2019 Dow University of Health Sciences, Karachi after obtaining ethical approval from the Institutional review board of DUHS (Ref: IRB-1207/DUHS/Approval/2019/21). A total of 70 participants, 35 subjects currently using smokeless tobacco (Gutka and Paan) and 35 non-tobacco users from both genders were included in the study after taking informed consent. Gingival biotype was recorded using probe transparency method. Probing of the gingival sulcus was performed at the mid-buccal aspect of both maxillary incisors. Depending on the visibility of the underlying probe gingiva was categorized as thin or thick.

Results: Statistically significant differences in gingival biotype was observed of both groups (p=0.005). Males were recorded with a higher percentage of thick gingiva in both groups (81% in smokeless tobacco and 65% in non-tobacco) while in females thick gingiva was more prevalent in smokeless tobacco group (85.7%) whereas thin gingiva was noted in non-tobacco group (66.7%); although the results between genders was statistically insignificant. The comparison between different age groups, genders and both groups was statistically insignificant.

In today`s world of esthetics-driven dentistry, the presence of a healthy periodontium is considered paramount to ensure a successful esthetically pleasing outcome. The clinical appearance of marginal periodontium differs not only from person to person but also amongst different tooth types within the same individual.1,2 The term gingival biotype has been cited in the literature to describe the thickness of the gingiva in the facio-palatal dimension.2 It is usually categorized as “thick and flat” and “thin and scalloped”.2 In 1986, Claffey and Shanley defined thin tissue biotype, presenting a gingival thickness of ≤1.5 mm and the thick tissue biotype of ≥2 mm.3,4 The thin and scalloped biotype presents as a thin periodontium with a highly scalloped gingival tissue and osseous contour. The tissue appears friable and translucent with a minimal zone of attached gingiva.2 The thick and flat gingival biotype is characterized by the presence of thick and dense periodontium, a wide zone of attached gingiva and a thick underlying bony architecture.2,5,6 The dense fibrous nature of thick biotype makes it more resistant to gingival recession. In comparison thin biotype is more prone to bleeding, inflammation and recession.7 The differences in gingival biotype has significant impact on restorative, prosthodontics, periodontal, orthodontic and other dental treatments and therefore, must be investigated to ensure esthetically pleasing results.

Various methodologies have been proposed to evaluate the gingival thickness. These methods include visual examination, direct tissue thickness measurements using an endodontic spreader with a rubber stop or a caliper inserted at the center of the gingival margin and mucogingival junction in a perpendicular direction, Trans-gingival probing or Probe transparency technique (TRAN), use of ultrasonic devices and Cone beam computed tomography (CBCT).2,8,9

The probe transparency technique (TRAN) is a commonly employed method to evaluate gingival biotype. The methodology entails the insertion of a probe within the tooth sulcus at mid-facial aspect. The gingival biotype is categorized as either thin or thick according to the visibility of the underlying periodontal probe through the gingival tissue. The method has the advantage of being universally accepted, economical, and non- invasive with a good accuracy rate.2,10,11

Many factors are responsible in determining and/or influencing the gingival biotype these include: genetics, tooth shape and position, biological phenomena such as age, gender and growth potential and environmental risk factors such as smoking or smokeless tobacco consumption.1,12,13 The positive association between tobacco consumption and periodontal disease has been established via multiple cross sectional and longitudinal studies. Increase in pocket depths, clinical attachment loss and alveolar bone loss are more prevalent in smokers than non-smokers. Tobacco consumption has its effects on periodontium, which is reflected by morphologic and histologic changes of gingiva. Assessment of Gingival biotype can help predict the outcome of any aesthetic dental treatment such as root coverage procedures or restorative treatment.10,12,14

A 2012 nationwide survey on Pakistani population by Gilani SI and Leon DA15 reported that 34.9% males and 5.1% females consumed tobacco in either its smoked or smokeless form. They further reported that the highest percentage of tobacco consumption in males was amongst hookah smokers (13.8%), followed by Gutka (9.4%) and Paan eaters (11.5%). In females, Gukta (2.7%) was recorded as the most commonly consumed form of smokeless tobacco followed by Naswar (2.2%) and Paan (2.2%).15

The purpose of the present study was to assess the gingival biotypes of smokeless tobacco (Paan and Gutka) users and compare it with non-tobacco users in Karachi sub population using trans-gingival probing method (TRAN). The use of this simple and reliable method to identify the gingival biotype can give the clinician an idea about the care to be taken in tissue handling, the type of procedure to be employed and modify treatment according to patient’s gingival architecture.

This in-vivo, cross sectional study was conducted in the department of Operative Dentistry at Dr. Ishrat-ul-Ebad Khan Institute of Oral Health Sciences at Dow University of Health Sciences (DUHS), Karachi from 20th February 2019 to 25th June 2019. The ethical approval was obtained from the Institutional review board of DUHS (Ref: IRB-1207/DUHS/Approval/2019/21). Study participants were selected using non-probability, convenience sampling technique. PASS v11 software (Microsoft, Redmond, WA, USA)16 was used to determine the sample size, using two independent sample t-test, with 99% confidence interval and 99% power of test; taking mean±SD of gingival thickness in smokers (0.48±0.13 mm) and non-smokers (0.35±0.07 mm).17 The sample size calculated for each group was 35 participants. The total sample size calculated for this study was 70 participants.

Sample collection procedure: A total of 70 participants were included in the study using the following inclusion criteria: Patients from both genders aged between 20-50 years, with all incisors present in maxillary arch, currently using smokeless tobacco in the form Gukta or Paan less than 3 times per day for more than 1 year. Whereas patients presenting with caries, cervical restorations, anterior prothesis, periodontitis, currently using any medications affecting periodontal tissues (such as anticonvulsants, antihypertensive, immunosuppressive drugs) were excluded from the study. The selected patients were divided into two groups with 35 patients in each group. Group A - Participants who used smokeless tobacco and Group B- Participants who were non-tobacco users.

Informed consent was obtained from all participants included in the study. Gingival biotype was evaluated by the principal investigator and confirmed by co-investigator using probe transparency method. Probing of the gingival sulcus was performed at the mid-buccal aspect of both maxillary central and lateral incisors. Standardized periodontal probe (UNC-15, Hufriedy) was used to assess the transparency of gingiva.18 If the outline of underlying probe was visible through the gingiva it was categorized as thin, if not it was categorized as thick. The results were recorded as score:

Score 0: Both central and lateral incisor with thin biotype.

Score 1: Both central and lateral incisor with thick biotype.

Scores were recorded on a proforma. Descriptive statistical analysis was performed using Statistical package for Social Sciences (IBM SPSS Statistics, version 23, Chicago, IL). Chi-square test was used to find the significance of study parameters between groups. Level of significance was set as 0.05 (p<0.05). 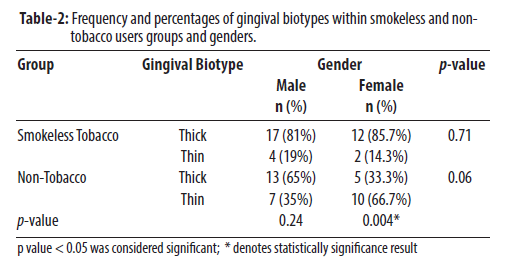 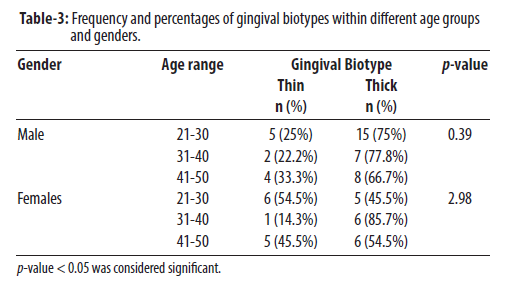 The present cross-sectional study was designed to evaluate the effect of smokeless tobacco (Gukta and Paan) on gingival biotype. Numerous studies have established that tobacco consumption negatively affects gingival tissue vascularity, alters its inflammatory and immune responses and impedes healing potential of periodontal connective tissue.17 Many clinical studies conducted, have support a direct correlation between gingival tissue biotype and its response to different dental treatments and parafunctional habits.17,19 Hence, a proper assessment of gingival thickness is of vital importance in devising a treatment plan with a predictable esthetic result.

In the present study, majority of the participants presented with a thick biotype 47 (67.1%) while thin biotype was found in only 23 (32.9%) of total participants assessed in the sample population (Table 1). This finding is in agreement with previous studies11,20,21 where thick biotype was found to be more prevalent amongst the sample population. Contradictory, Reza Amid et al22 assessed gingival biotype via CBCT of the maxillary anterior teeth and reported significantly higher percentages of thin gingival biotype within the maxillary anterior region.

The current study found significant difference amongst the gingival biotype of smokeless tobacco and non-tobacco users. A higher prevalence of thick gingival tissue 29 (67.1%) was recorded within the smokeless tobacco group, thin biotype was more commonly found within non-smokers 7 (73.9%) (Table 1). This observation is similar to the results of a previous study, which assessed the gingival thickness of smokers and non- smokers at mid-buccal and interdental areas. They observed that the gingival thickness at both areas was significantly thicker in smokers as compared to non-smokers.15

In the present study a wide age range was included to assess the gingival biotype in different age groups (Table 3). In males, a higher incidence of thick biotype was observed in younger group (20-30 years) which decreased with advancing age. Among female participants the thick biotype was evenly distributed among all age groups. Although the comparison between different age groups and gingival thickness of both genders was statistically insignificant. Other authors have assessed the association of age on gingival thickness and have reported comparable findings to our study. Manjunath RS et al evaluated gingival thickness with regards to age, gender and arch location, they reported that thicker gingival biotype was most commonly presented by male participants belonging to younger age groups.9 They also observed that the thickness of gingiva decreased with advancing age.9 Similar inferences were reported by previous study24 who studied the correlation between age and gingival thickness within a sample of Indian population.

Keeping in mind the significance of aesthetic considerations in dental treatment, the importance of accurate and quick identification of patient’s gingival biotype is imperative. Hence, the purpose of the present study was to compare the gingival biotype of smokeless tobacco (Gutka and Paan) and non-tobacco users using probe transparency technique. The assessment of morphometric differences between gingival tissue biotype via this non-invasive technique is simple, accurate and an effective method to judge the thickness of gingival tissue present and adapt a treatment regime ensuring maximum aesthetic results for individual patient’s needs. It is our recommendation that further multicentre clinical studies be conducted with a larger sample size.

Significant difference was observed between the gingival biotype of smokeless tobacco and non-tobacco users. Males presented with a higher percentage of thick biotype while females showed thin gingival tissues with no significant difference between them. The effect of smokeless tobacco had significant influence on the female gingival biotype only. No relationship was found between age and tobacco use among both genders observed in the study.

15.    Gilani SI, Leon DA. Prevalence and sociodemographic determinants of tobacco use among adults in Pakistan: findings of a nationwide survey conducted in 2012. Popul Health Metr 2013; 11: 16.