Objective:  To determine the pattern of antimicrobial sensitivity of common microorganisms isolated from diabetic foot infections.

Method: The cross-sectional study was conducted from January to August 2019 at the Diabetes and Footcare Clinic, Mayo Hospital, Lahore, Pakistan, and comprised deep-seated tissue samples from the ulcer bed that were tested for culture and sensitivity. Antimicrobial susceptibility was determined in accordance with Clinical and Laboratory Standards Institute guidelines. Data was analysed using SPSS 26.

Conclusion: Early identification of diabetic foot infections can help in timely initiation of empirical treatment and prevention of unwanted amputations.

The overall age-adjusted prevalence of glycaemic dysregulation in Pakistan, including diabetes and pre-diabetes, is 26.3% and 14.4% respectively. This prevalence is almost twice compared to that in the first National Diabetes Survey of Pakistan (NDSP; 1994-98).1 Diabetes-related complications represent the major cause of premature deaths in the world2,3 with a death occurring every 6 seconds due to diabetes.2,5

With lifetime incidence of diabetic foot ulcers (DFUs) up to 12-25%6,7 diabetes-related morbidity rates are staggeringly high; the five-year mortality rate after lower extremity amputation (LEA) is second only to lung cancer.8 More than half of all DFUs become infected, requiring hospitalisation, and 20% of lower extremity infections result in amputation.8,9 In countries like Pakistan, about 14-20% patients with diabetes who develop DFUs undergo amputation.10

Diabetic foot infections (DFIs) are usually poly-microbial.6,10 Most of the studies report mild to moderate DFIs as mono-microbial, and severe DFIs as poly-microbial.11-13 Almost all studies agree upon staphylococcus (S.) aureus as the most common organism isolated from infected DFUs7,9,10,14 along with β-haemolytic streptococci, including groups A, B, C and G.

Studies in this regard are designed keeping certain factors in view. These include the diversity in geographical distribution of organisms15,16 the prevalence of nosocomial infections15 clinical significance of regional data in developing guidelines regarding decisions of choice, route, duration and dosage of antibiotics; constantly evolving local antibiotic resistance patterns due to injudicious use;17 and the perpetual dynamic trend observed with gram-negative pathogens replacing gram-positive isolates as the commonest agents involved in DFIs.10

The current study was planned to determine the pattern of antimicrobial sensitivity of common microorganisms isolated from DFIs.

The observational, cross-sectional study was conducted at the Diabetes and Footcare Clinic (DFC), Mayo Hospital, Lahore, Pakistan, from January to August, 2019. After approval from the ethics review board of the King Edward Medical University, Lahore, the sample size was calculated using estimated prevalence of foot ulcers as 25%6,7 with a confidence interval of 95% and absolute precision of 6%. The sample was raised using non-probability consecutive sampling technique, and comprised diabetic patients of all ages and genders with DFUs. Patients with history of antibiotic use 90 days prior to presentation, as well as those with limb infections without history of diabetes were excluded. After taking informed consent from the subjects, data was collected using a predesigned proforma which is routinely used for patient registration to record demographic details, such as age, gender, DFU stage and type, outcome and details of follow-up.

Sample collection was carried out under universal aseptic measures, with samples collected after surgical debridement of slough and necrotic tissue, as well as thorough ulcer washing with normal saline. Deep-seated tissue samples, approximately 0.5 x 0.5cm were taken from the ulcer bed, collected in sterile containers with normal saline, and immediately sent for culture and sensitivity (C&S) testing to the microbiology laboratory. Antimicrobial susceptibility was determined in accordance with Clinical and Laboratory Standards Institute (CLSI) standards19 and reports were stored in the clinic’s database.

Data was analysed using SPSS 26, and was expressed as mean±standrd deviation (SD) for continuous variables, and as frequency with percentage for categorical variables. 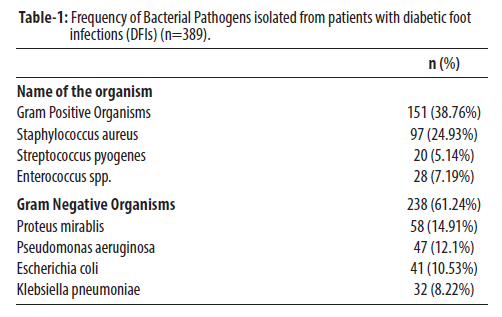 Patterns of antibiotic sensitivity were determined for all the isolated organisms based on microbiology reporting (Table 2). 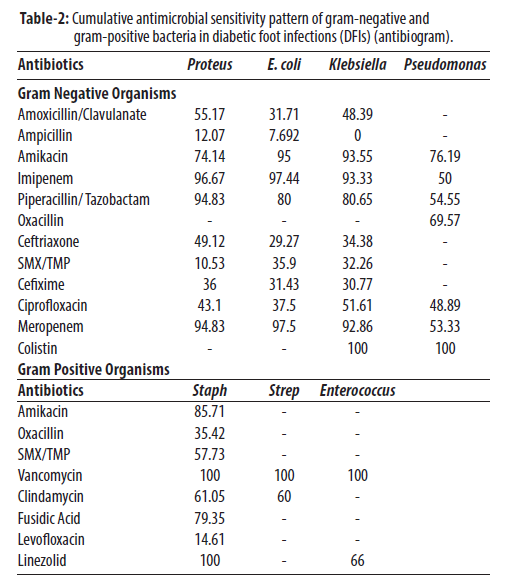 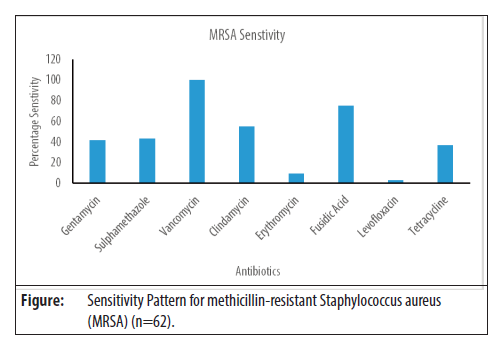 The present study showed a predominance of polymicrobial foot infections, which is in concordance with several earlier studies.6,9,10 One study showed a higher percentage of monomicrobial infections17 which can be attributed to its smaller sample size.17 Some studies have reported increased monomicrobial cultures when patients were treated with antibiotics before sampling.20 In the current study, this bias was also eliminated as all patients with prior history of antibiotic therapy were excluded.

In the present study, 38.81% bacterial isolates were gram-positive. The most common among these was S. aureus, accounting for 24.93% of the isolates. Such a finding is common inliterature.7,9,10 The present study found a high incidence of MRSA at 64.58%. Highest susceptibility of S. aureus was reported with vancomycin, fusidic acid and sulphamethoxazole/trimethoprim (SMX/TMP) at 100%, 79.35% and 61.05% respectively. Among MRSA isolates, the susceptibility pattern was observed with vancomycin, fucidic acid and clindamycin at 100%, 75% and 55% respectively. These results report a higher incidence compared to studies conducted in other countries in which MRSA incidence ranged from as low as 12.2%10 to as high as 49%20. In the current study, the unusually high incidence of MRSA can be attribued to delayed referral, improper duration and injudicious use of antibiotics, and advanced stage of ulcer at presentation. The high prevalence of S. aureus in DFIs can be attributed to contiguous spread from overlying soft tissue.21

The current study found a high overall incidence of gram-negative infections, at 61.19%. Among these, proteus (14.91%) and pseudomonas (12.1%) accounted for the majority of isolates. The antimicrobial pattern revealed overall good sensitivity, especially against the two mentioned above, for carbapenems, piperacillin/tazobactam and colistin. There was a dynamic trend of increasing resistance for penicillin, cephalosporins, and fluoroquinolones (Table 2) which is consistent with other studies.21,22

Fungal infections are often overlooked in the context of DFIs. In the current study, 27 fungal isolates were obtained; 9 A. flavus, 5 A. niger, and 4 candida (C.) tropicalis, and some other less significant organisms. The reported incidence and type of fungal infection has varied.23 Usually fungal infections are associated with high grade of ulcer and infection24 and careful attention needs to be paid regarding their management while treating DFIs.

The trend of gram-negative predominance in the current study is reflective of what has already been reported by major studies carried out in temperate climates.25 A systematic review of 39 studies carried out across the Middle East and North Africa (MENA) region failed to find the reason for discrepancy in geographical trends, thereby highlighting the need for further large-scale microbiological and epidemiological studies on DFIs.26

Based on the finidngs and in line with IWGDF guidelines,18 it is recommended that a regimen of empirical antibiotic use for various grades of DFIs must be followed (Table 3). 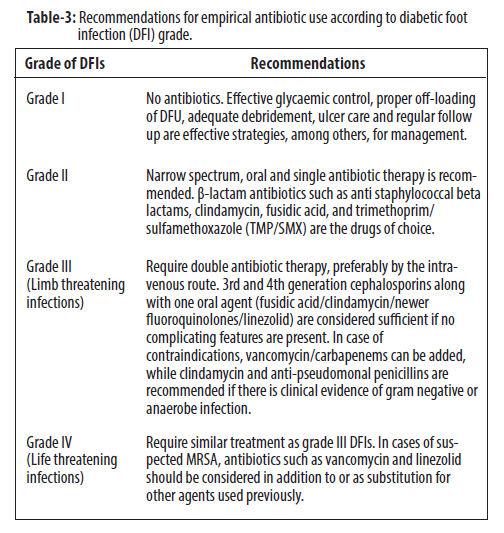 Empirical treatment should commence after diagnosis till definite antimicrobial sensitivity report of tissue isolate is available, following which antibiotics should be changed or adjusted. Definite therapy guided by C&S report should only be initiated if clinical response to empirical regiment is observed as slow, inadequate and incomplete. Moreover, it should be done within as short a time period as possible.

DFIs are a leading cause of morbidity and mortality in diabetic patients. These infections are mostly poly-microbial, with gram-negative predominance in temperate climates. Early, narrow spectrum, oral and single empirical therapy can help prevent progression of DFIs, and should always be supplemented or substituted by definite antibiotic therapy based on tissue C&S. In the backdrop of rising multiple drug-resistant organisms (MDROs), health policy-makers, institutions/facilities and healthcare professionals (HCPs) should collaborate to design and execute effective antibiotic stewardship strategies to combat this problem at all levels of the healthcare system.