Objective: To evaluate the sensitivity of the modified Brief Form of Bruininks Oseretsky Test in identifying motor differences secondary to malnutrition and poverty.

Conclusion: The 6-item motor composite of the Brief Form of Bruininks Oseretsky Test was found to be a reliable tool to measure motor performance in Pakistani pre-school children.

There are relatively a few valid and reliable motor proficiency tests for young children and no gold standards for measuring motor proficiency in preschool children aged 4-6 years.1 The Bruininks-Oseretsky Test of Motor Proficiency (BOT) is one of the most widely used tests of motor proficiency globally.2,3 This test was revised and published in 2005 as BOT2 with the goals of improving measurement among those aged 4-5 years, expand coverage of fine motor (FM and gross motor (GM) skills, and improve the functional relevance of the test content and item presentation.4,5 The latter two goals were achieved by minimising the use of scripted item instructions through an administration easel, thus allowing the examiners more flexibility to individualise instruction to each examinee, which is particularly important when testing preschool children.

There are technical challenges involved in measuring motor performance in preschool children. These include limited memory capacity, attention span, and language and vocabulary skills. Additionally, a lack of motivation or cooperation can also affect testing results.6,7 Therefore, to hold a child’s interest and engage the child in the testing process, it is imperative that the testing session is short and items tested are relevant and age-appropriate. The BOT2 Brief Form (BOT2-BF) satisfies all of the above requirements, taking only 15-20 minutes to administer and test age-appropriate pre-handwriting and self-help skills that require FM control, manual dexterity and visual-motor integration.8 The BOT2-BF has been validated against the full scale BOT2 with high correlation for 4-year-olds (r=0.81).4 Despite the potential advantages of using BOT2-BF for the preschool group, no study could be found reporting the use of BOT2-BF.

In addition to considerations of age-related motor abilities, the evaluation of children’s motor development is intertwined with their physical growth and nutritional status, which can be compromised by an impoverished environment.9,10 In low and middle-income countries (LMICs), such as Pakistan, many children are exposed to malnutrition and poverty.11 Pakistan’s under-5 stunting prevalence, which is an indicator of chronic under-nutrition defined as 2 standard deviations (SDs) below the age and sex norm for height,12 is estimated to be 44%. There are no norms for assessing motor proficiency in Pakistani children. Any assessment of motor proficiency must take into consideration the socio-cultural environment.13,14

The current study was planned to examine a socio-cultural modified and translated BOT2-BF in order to determine how well this test works among a cohort of 4-year-old children living in rural Pakistan, and to evaluate whether the BOT2-BF was sensitive enough to discriminate motor differences secondary to malnutrition and poverty.

This longitudinal cohort study was conducted at Nowshero Feroze, Sindh from 2013 to 2014 and comprised data drawn from children who participated in a randomised controlled trial, that assessed responsive stimulation and nutrition interventions in the first two years of life.15 The trial was registered at ClinicalTrials.gov (NCT007159636). The current study was approved by the ethics review committee of the Aga Khan University (AKU), Karachi. The current sample included data of children assessed for motor proficiency at 4 years of age living in a predominantly rural environment and impoverished area.

The BOT2-BF comprises 12 items testing FM precision and integration, manual dexterity, bilateral coordination, balance, speed and agility, upper limb coordination and strength. To ensure socio-cultural relevance and linguistic equivalence in translation of the BOT2-BF, a systematic approach was adopted to make the required modifications, if any.16 No test items were changed, but two changes were made to the administration procedures. Firstly, for balance, speed and agility items, like walking heel-to-toe on a straight line, and one-legged side-hop, it was decided that both the child and the examiner would go barefoot because most children could not afford or did not have the appropriate footwear. Secondly, emphasis was placed on physically walking the child through the required movement in case verbal instructions and physical demonstration by the examiner did not work. The administration easel of BOT2-BF and the scoring sheets were translated into the local Sindhi language by the field team with independent back translations into English to check for accuracy.

Anaemia was tested using the level of haemoglobin (Hb) in the blood. A value of less than 10mg/dl was indicative of moderate to severe anaemia. The blood sample was taken using a finger prick assay with HemoCue (HemoCue B-Haemoglobin System, HemoCue AB©, Sweden).

BOT2-BF data was collected by a team of trained community-based child development assessors (CCDAs). Quality assurance for reliability of administration was achieved through monthly supervisory visits for each assessor. Inter-rater reliability was calculated between the CCDAs and the supervisor. Monthly video reviews with feedback for each assessor were provided. The child was tested according to the sequence of items presented in the BOT2-BF protocol. If the child could not or refused to perform a particular item, only then was the next item attempted.

At the end of the testing session for BOT2-BF, the items that the child could not perform or refused were presented again as per the BOT2-BF protocol. For the first four items, which tested FM abilities, the child was seated on a chair with a table, on which the child was asked to perform FM activities. 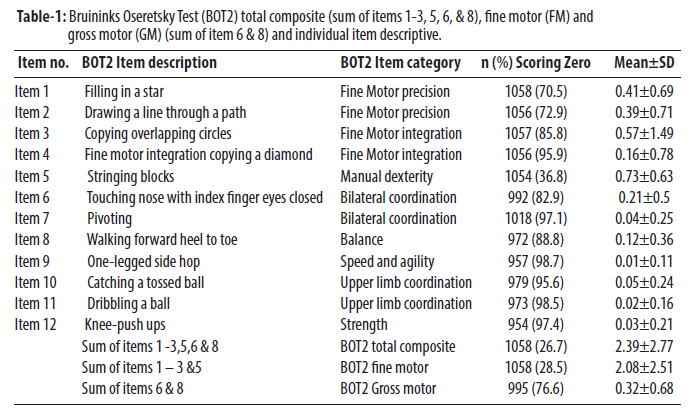 and those items were excluded on which 95% children scored zero. As such 6 items were removed (Table 1) The 6-item overall motor composite for BOT2-BF was used for the total score of items 1-3, 5, 6 and 8.  PCA with varimax rotation and Kaiser normalisation resulted in two factor loadings.; FM = sum of items 1-3 and 5; and GM = sum of items 6 and 8. Item 5, manual dexterity, loaded equally on both factors, and was retained in the FM composite. Internal consistency of factors to examine test stability for BOT2-BF 6-item composite was calculated using Cronbach’s Alpha and was found to be adequate at 0.6. Intra-class correlation coefficients to examine intra-rater reliability were high for the 6-item overall motor composite (n=90, ICC=0.975, p<0.0001), the FM composite (n=90, ICC=0.970, p<0.0001), and the GM composite (n=90, ICC=0.974, p<0.0001) (Table 2). 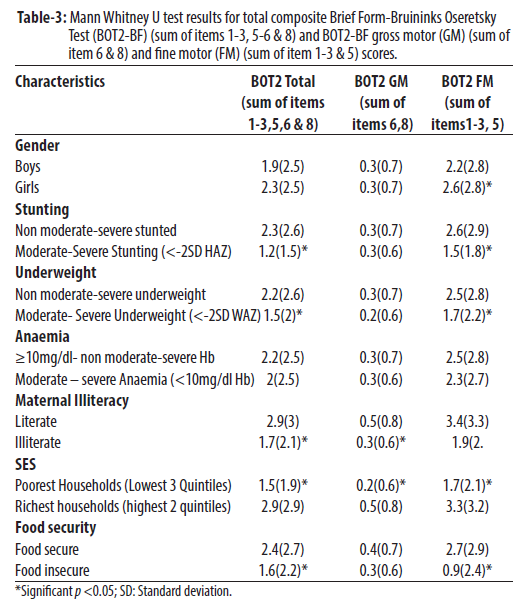 In the current study, which was the first to validate BOT2-BF in Pakistani children living in poverty, 70% subjects did not do well in both FM and GM items of the BOT2-BF except for manual dexterity, item 5, where only 37% scored zero. The overall poor motor performance was most likely secondary to nutritional and economic inequality. The detrimental effect of malnutrition and impoverished environment on motor development is well-documented.19 Stunting has a robust effect on GM development, especially during the first 3-4 years of life.20 Under-nutrition can lead to irreversible consequences in the development of muscle function.21

Girls outperformed the boys in FM items of BOT2-BF. The result is in agreement with a US sample.4 No gender differences were found in GM items 6 bilateral coordination and 8 balance of the BOT2-BF.  Perhaps it was because of the age range tested. The children were just 4-years-old, an age range when the above-mentioned motor capabilities are just beginning to emerge. This result is in contrast to a recent Indian study.22 Boys scored higher than girls in that study22 which could be because the age range tested was 61/2 – 91/2 years, when boys usually do better than girls.4 In a study done in Hong Kong, no gender differences were found except for balance, where girls scored higher than boys.23 Again, this could be secondary to age (4.6-5.5 years).4

The above differences in gender and the differing motor abilities among children of different countries bring up the valid observation that “norms developed in one country might not be applicable to children of other countries”.23 Rather than taking a drastic stand, a middle-path approach might be to adapt BOT2-BF according to the culture of the country, and to use portions of the test that best fit the population that is being tested.

In this Pakistani cohort of 4-year-olds, PCA yielded two factors, one measuring FM (sum of items 1-3 and 5) and one measuring GM (sum of items 6 and 8) respectively. The result is in contrast to a study conducted in the United Arab Emirates.3 Current results indicate that FM precision and integration along with manual dexterity are important and appropriate areas of motor proficiency to measure in the 4-year-old Pakistani cohort. Specifically, it is expected that items measuring FM precision, like filling in a star, and drawing a path through a line, will identify those children who might have handwriting difficulty in school. A study suggested that it might be possible to identify handwriting readiness and pre-handwriting skills via poor performance on FM tasks.24 A study described a floor effect secondary to task difficulty in 318 Greek preschool children aged 4-6 years when they were tested using the BOT2-BF25 and it suggested a modification of the test item battery for children aged 4-6 years in order to improve validity of testing in this age range. All children scored zero for balance, bilateral and upper limb coordination items. This is understandable because the latter are motor proficiencies just beginning to emerge in 4-year-olds.

A 6-item composite of BOT2-BF was found to be a reliable screening tool to measure motor performance in Pakistani preschool children. Maternal literacy was as important a factor as SES in affecting motor performance in the sample.  Developmental delay secondary to malnutrition and maternal literacy is an important consideration when designing treatment intervention. Physical therapists need to consider energy cost of movement with referrals to nutritional services. Since this rural scenario is expected to be identical in similar populations globally, BOT2-BF maybe reliable in south-east Asia as well.

Disclaimer: The title of the study in the institutional review board (IRB) cannot be used in the current research paper because a study under that title has already been published in Lancet. This was a huge project from which several sub-studies were done and published. The current paper on the motor performance in impoverished Pakistani children is one such sub-study.