Objective:  To determine the effect of maternal tolerance on behavioural problems in children with enuresis.

Method: The cross-sectional descriptive study was conducted from January to November 2018 at the outpatient departments of three hospitals in Lahore and Sialkot district of the Punjab province in Pakistan. The sample comprised of mothers aged 23-50 years having children with enuresis visiting one public-sector tertiary-care hospital and two private-sector secondary-care hospitals. Data was collected using the Tolerance Scale and the Children Behavioural Questionnaire and was analysed using SPSS 21.

Conclusion: Maternal intolerance and hostile attitudes towards children with enuresis was seen to be leading to secondary behavioural and emotional difficulties.

Enuresis, commonly known as bed-wetting, is an elimination disorder as per the fifth edition of the Diagnostic and Statistical Manual for Mental Disorders issued by the American Psychiatric Association (APA) in 2013.1 Elimination disorders are in most cases identified in children or adolescents. Enuresis is characterised by repeated failure to restrict urination on bed or in clothes regardless of whether it is voluntary or not.1 It has been established that nocturnal enuresis is the most widespread and prolonged disorder of childhood.2 It is also the most frequently reported problem in school examination settings.3 Many epidemiological surveys on the condition have been conducted all over the world,4-7 including Pakistan.8 However, the inconsistency of the type of methodology utilised in these researches has negatively impacted comparison of the results.

The attitudes and apprehensions of parents, especially mothers, regarding enuresis influence the child’s development. Parents’ beliefs regarding bed-wetting and its causes have a significant effect on their relationship with their children. This in turn impacts the psychosocial development of the child. Lack of insight and awareness regarding enuresis may cause the parents to develop unrealistic expectations of their child. They may compare their child’s development with those of other children not considering individual differences in the speed of development among children. This might lead the parents to believe that their child is lazy and disobedient, thus subjecting him/her to undue aggression, neglect, punishment, and even abuse.9

One study named hostile parental attitudes towards children with enuresis as a potential cause of poor compliance and early withdrawal from treatment procedures.10 A number of parents develop intolerance and become distressed, especially when the affected child is well beyond the developmental age of five years. In this situation, the attitude of the parents change and their worries start to converge on their own problems. These concerns include laundering, taking care of the odour, financial stress etc. At this stage, they assume that bed-wetting is something which can be controlled by the child. This leads to surfacing annoyance and a strict disciplinary method of coping.11 The interaction between the child and the parent suffer because of this, resulting in increased tensions among the household members and even physical abuse.12

Age-appropriate bladder control is crucial for a healthy life and emotional well-being. Difficulty in achieving bladder control can result in substantial psychological distress in children, and this can affect their emotional and behavioural adjustment.13,14 A large number of studies have recapitulated the emphasis of detrimental effects bed-wetting has on growing children.12,15,16 Moreover, sufficient evidence exists for the high rate of prevalence of emotional disorders in the pool of children having enuresis, particularly those who wet themselves in the daytime.17,18 These affected children are also vulnerable to developing skin-related conditions, such as sore and inflamed skin and urinary tract infections (UTIs).13,19

In Pakistani society, like most Asian and Middle Eastern societies, punishing a child in order to discipline him/her is a norm.20 However, the ill effect of such a treatment on a child who is already suffering from a disorder beyond his/her control is great. Rebuking a child with enuresis may aggravate the problem and lead to feelings of inappropriate guilt, embarrassment, low self-esteem and helplessness in the child.17 This harsh treatment in the long run may also lead to mental health problems for the child.21 Furthermore, being reprimanded for wetting clothes at school and a complaining and non-supportive attitude of the school staff may become a source of distress for both the parents and the child. Studies have reported that such children also perform poorly in school compared to their healthy counterparts.22

Despite the potential for adverse effects, few families seek treatment for enuresis. This indicates that the understanding of enuresis in the community is largely elusive. The present study was planned to assess the relationship between maternal intolerance and behavioural problems in children with enuresis.

The cross-sectional descriptive study was conducted from January to November 2018 at the outpatient departments of three hospitals in Lahore and Sialkot district of the Punjab province in Pakistan. After approval from the Departmental Doctoral Programme Committee of the Centre for Clinical Psychology, University of the Punjab, Lahore, the sample size was determined using G*power analysis23 with medium effect size 0.15, alpha (α) 0.05 and beta (β) 0.95. The sample was raised from among mothers aged 23-50 years of children aged 6-13 years formally diagnosed with enuresis by the on-duty consultant paediatrician. The subjects were enrolled using non-probability purposive sampling technique which allowed identification of potential participants.24 The diagnosed children were further screened according to the DSM-V diagnostic criteria.1 Mothers who had any psychical disability or chronic illness, as identified through self-report and general observation, were excluded along with those who were divorced or separated. Written permission for data collection was obtained from the medical superintendents and head of departments of the four hospitals that were part of the study. The on-duty consultant at each centre was requested to refer children with enuresis to the researcher after initial diagnosis of enuresis. After taking written informed consent from the subjects, a semi-structured pre-designed demographics questionnaire was administered verbally and individually in the native language. It included one section related to information regarding the mother, and another section related to information regarding the child.

Maternal tolerance was assessed using the Tolerance Scale (TS) which is a brief 20-item scale. Higher score is indicative of intolerance for enuresis and vice versa.25 It is scores in Likert format from 0 = “Disagree” to 2 = “Agree”. A mother’s score was the sum of scores on each item. The total score range in 0-40. The overall test-retest reliability coefficient of the scale is r = 0.49.11 Cronbach’s alpha for the scale in the present study was 0.89.

To assess behavioural issues in children with enuresis, the Children Behavioural Checklist (CBCL) questionnaire-parent form for school-aged children was utilised.26 Seven subscales were included in the study; anxious/depressed, withdrawn/depressed, somatic complaints, rule-breaking behaviour, aggressive behaviour, social problems, and attention problems. Mothers were asked to rate the items on a 3-point ordinal rating scale from 0 = “not true at all” to 2 = “mostly true”. Scores were simply added.  Studies have demonstrated a high rate of reliability between CBCL and actual psychological diagnosis.27 For the empirically based problem subscales, the alpha coefficients range from 0.78 to 0.95 on the CBCL.28 Cronbach’s alpha for the overall checklist in the present study was 0.98.

Data was analysed using SPSS 21. P<0.05 was considered significant, and all tests were two-tailed. 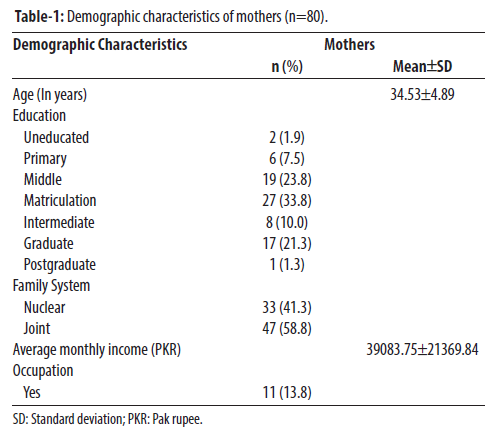 Maternal intolerance was positively and significantly correlated with rule-breaking (p=0.02) and aggressive behaviour (p=0.01) in children with enuresis (Table 2).

In the current study, majority of the mothers were undereducated. Increased prevalence of enuresis has been observed with lower education level of the parents, especially mothers.29 Studies have also demonstrated that lower maternal education may act as a risk factor for perpetuating and maintaining enuresis in children.30

The mean age for children in the current sample was 8.16±2.36 years. Research has shown that enuresis is common among children aged 6-8 years. Remission rates are considerably high as child grows older.29,31,32

Findings also indicated that the degree of tolerance from the mother was both significant and positive in its correlation with rule-breaking and aggressive behaviours. According to a study, intolerant mothers tend to lay the tension and burden of enuresis out on their children.33 Problematic child behaviour could hint at the distress and lack of tolerance from the mother’s end. It has also been shown that families in which the parents are more distressed, intolerant and have minimal emotional support, there is a higher inclination towards developing family fights, which in turn greatly impacts the children’s psychosocial state.34 A study emphasised the importance of the effect of lack of tolerance from the parents on the child’s stress levels, which leads to the development of psychopathologies, and it can be understood that detrimental attitudes displayed by the mother addressing the child can lead to higher susceptibility to bed-wetting behaviour.35 Mothers also believe that children of an older age can control this behaviour more efficiently. Mothers who think their children can regulate this behaviour on their own are also, as per the attribution theory, less tolerant. This attitude can induce a mixture of emotions in the child, not limited to remorse, rage, hopelessness, helplessness and unhappiness. If allowed to fester, these thoughts may lead to the development of negative behaviours.

A study on children having primary nocturnal enuresis demonstrated that punishment and harsh attitudes had poor outcomes, and could even lead to depression and overall diminished life quality.20 The expression of such issues can call for even greater levels of intolerance and feelings of negativity from the mother, which facilitates this cycle of toxicity.

Regression analysis in the current study showed that maternal intolerance significantly predicted aggressive and rule-breaking behaviours in the affected children, which is in line with literature.36,37 Certain studies have demonstrated that children with enuresis show more emotional and behavioural difficulties compared to healthy controls.38 Research has also demonstrated the association between enuresis and attention difficulties along with other emotional and behavioural difficulties; specifically, its co-morbidity with attention deficit/hyperactivity disorder (ADHD) has been observed.39-41

Level of maternal tolerance in the current study did not significantly predict other behavioural problems (Table 2). Further studies are needed to verify these findings and explore the role of certain protective factors. These studies may employ a longitudinal design so that the cause-and-effect interpretations may be made more confidently and reliably.

Future studies may need to focus on other risk and protective factors in the development of enuresis. Taking into consideration the father’s perception regarding enuresis may also help understand the psychosocial implications of the disorder.

Maternal intolerance and hostile attitudes towards children with enuresis lead to secondary behavioural and emotional difficulties. Enuresis is a specific entity, different from other bio-behavioural problems in terms of antecedents and correlates. It supports the contention that bladder control is a milestone to be achieved when a child is physiologically and psychologically ready. In other words, even when the child is maturationally ready, if the family environment is not congenial and maternal support and understanding is lacking, there may be problems and delay in the achievement of bladder control.

Disclaimer: The text is based on an unpublished research thesis for MS, Clinical Psychology, degree.

18.    Fielding D. The response of day and night wetting children and children who wet only at night to retention control training and the enuresis alarm. Behav Res Ther 1980; 18: 305-17.

34.    Morison, MJ. Parents’ and young people’s attitudes towards bedwetting and their influence on behaviour, including readiness to engage in and persist with treatment. Br J Urol 1998; 81 (Suppl. 3): 56–66.