Results: Results of descriptive analysis showed that majority of respondents belonged to age group 29-37 (39.5%). Educational attainment of majority of the respondents was 6-11 years 95(38.3%), whereas, 27.4% of the respondents had monthly household income between Rs.10001-20000. Religiosity had strong correlation with self-esteem whereas it was negatively correlated with perceived discrimination. Perceived discrimination and level of stress related growth were negatively correlated with each other.

HIV is not only recognized as a medical issue rather it is increasingly becoming a social issue as well. People living with HIV/AIDS have been subjected to discrimination and stigmatization by their family, communities and colleagues. This discrimination may affect well-being of HIV/AIDS victims and discourage them from actively participating in various social affairs. It has been observed that stigmatized people feel risk of being a target of prejudice or discrimination which significantly affected their physical and emotional health.1 Further it has been reported that facing the discrimination is related to various adverse mental health consequences like depression, worry, pain and resentment.2 These results provoked many scientists to investigate the psychosocial aspects of human beings which reduce the feeling of discrimination.

Review of former debates and studies have shown religion to act as a shield against harmful mental outcomes of discrimination and other traumatic situations.3

A number of researchers have examined the effect of religiosity on various mental health states as adverse psychological consequences, life gratification and key depressive conditions.4

Similarly, there are evidences which support that stressful and potentially traumatic experiences of life often disturb “assumptive world” of individuals who have undergone such situations.5 This assumptive world is where the individual can become consistent, expectable and even manageable. Sometimes traumatic experiences transform individuals and help them to reconstruct and modify their assumptive world and acquire   normal functioning. This reconstruction of schemas is done through rearticulating thoughts, feelings and emotions associated with stressor and integrating it into structure of cognition. Therefore, after passing through a traumatic life incident, people may find new meanings of their life and world and eventually follow new strategies to cope with the changing situations. In turn, these strategies lead towards a greater sense of self efficacy.  Furthermore, people re-examine their aims and ambitions and set their priorities accordingly. By going through this process individuals equip themselves along with newly found logic of strength, an improved gratitude and reassessment of their priorities.6

Considering the stress related growth it is evident that it denotes the optimistic variations that may be the consequence of traumatic life incidents. In past, researches on influences of stressful life events have generally concentrated on the adverse outcomes of the incidents, but now it is suggested that individuals may grow psychologically and emotionally as these stressful events may strengthen their potential. Arguments supporting post-traumatic growth hold that experience of stressful life events breaks the individual’s already present schemas about the suppositions of one’s self and world’s view and promotes restructuring of the beliefs.

In the present study the researchers focused on the observation, that though HIV patients are discriminated, there are certain social and psychological factors which not only mitigate effects of discrimination but also promote stress related growth of HIV victims.

It is observed that health is affected by the religious and spiritual beliefs of a person in a positive way. Affirmative attitude towards the religion is helpful in coping with various stressful events of routine life.7 For instance, any medical illness relevant to mental and physical health are the major life events for which the religious and spiritual beliefs are used as coping strategy.8 Religiosity and well-being of a person are positively associated with each other. However, religiosity is negatively associated with level of depression of a person. While praying, reading the religious material and attending the religious gatherings reduces the depressive symptoms and enhances the self-esteem of a person.9

In the same vein self-esteem is an important factor that helps individuals to get through difficult situations. Self-esteem means feeling high for one’s self. If people have high self-esteem it means they are satisfied with themselves which may eventually help them to build their confidence. So high self-esteem mitigates the effects of perceived discrimination, which may be on the basis of certain traits. It is vital to understand the component of self-esteem among those who are living with HIV. With the increase in self-esteem, positivity towards life increases, conversely, people with low self-esteem are more depressed and hopeless and have more negative mental health conditions.10 The people who have high self-esteem are more likely to be motivated and have high confidence level to control their lives even if it may have considerable struggles. Studies have also identified mutual support, parental relationships and supportive communication of family as correlates of self-esteem of children.11

The main objectives of the present study were to:

ii)      Find out the mediating effect of self-esteem on perceived discrimination and stress related growth among HIV/AIDS Patients.

This was a descriptive and cross sectional study. The target population was both male and female HIV/AIDS positive patients registered in Voluntary Confidential Counseling & Testing (VCCT) Center at Civil Hospital, Jalal Pur Jattan (JPJ), District Gujrat, Pakistan. Stratified Random Sampling technique was used to select the sample from both strata (male and female) of the target population. Total 647 patients were registered at the time of data collection (2017), from which sample of 247 was drawn by using Taro Yamani15 formula for sample size calculation.. Number of male and female patients was almost equal in both strata, so equal sample size (124 males and 124 females) was selected to be included as study respondents. Correlation and Regression analysis were used to analyze the data by using SPSS.

The respondents included in the present study were HIV/AIDS positive. They were registered in VCCT center and seeking treatment for HIV/AIDS from that center.

Questions regarding gender, age, education, occupation and monthly income were asked to collect the socio-demographic information of respondents.

Religiosity and spirituality scale for youth, developed and validated by Hernandez (2011)16 was used in this study. This scale consists of 37 items. Each item was scored on a 4-point Likert type scale ranging from 0= never, 1= sometimes, 2= often, 3= always. The scale measured level of religiosity with a combination of dimension of spirituality. No item needed reverse coding. Minimum and maximum scores on the scale were 51 and 93 respectively. High score on the index showed high level of religiosity. The reliability of this scale for the present study was moderate (Cronbach’s alpha=0.59).

Rosenberg Self-esteem Scale was developed by Rosenberg (1965).17 The scale was one-dimensional. It was a 10-item scale. The researchers measured this scale on 6-point Likert scale ranging from 1=strongly disagree, 2= disagree, 3= slightly disagree, 4= slightly agree, 5= agree, 6= strongly agree. Higher total score of self-esteem index showed higher level of self-esteem. The reliability of this scale for the present study was 0.217.

The members of Ethical Review Board certified that the study caused no harm to the subjects and their confidentiality and anonymity was ensured. 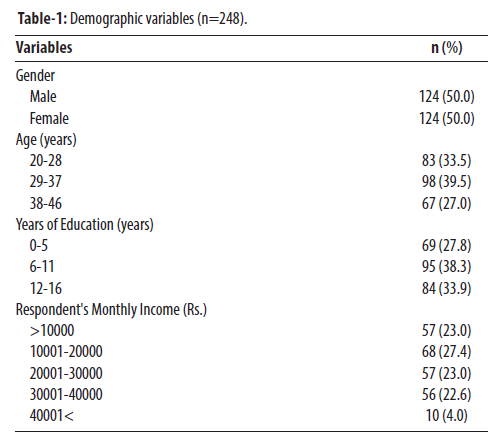 Table 1 shows the percentage distribution of socio-demographic variables of the participants. It depicts that there were equal number of males and females respondents. Majority of them belonged to age group 29-37 (39.5%). Educational attainment of majority of the respondents was 6-11 years 95(38.3%), whereas, 68 (27.4%) of the respondents had monthly household income between Rs.10001-20000.

In order to test the hypothesized relationship between variables, researchers used correlation and regression analysis and then the path analysis.

The table also depicts that level of perceived discrimination and level of stress related growth are negatively correlated with each other with correlation value -129, p<0.042.

(model 1). In model 2, impact of level of religiosity and level of self-esteem on level of perceived discrimination was also analyzed.

Path analysis was executed to test the hypothesized relationship between the variables. 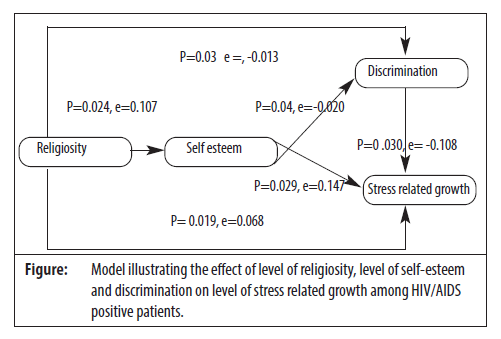 People around the world are being affected by a distressing disease HIV/AIDS. In a traditional society like Pakistan it is believed that people suffer from HIV/AIDS due to their wrong doings. In such circumstances, it is observed that religion helps them to cope with negative attitudes. Plausible explanation could be that religion gives worth to people’s life. It does not let them fall down. Whatever good or bad comes their way, they feel that it is from God and they take it as a test. They believe that if they pass this test it will help them in life here after. Therefore, various studies have endorsed positive relationship between religion and self-esteem. Religion plays an important role in the life of individuals in Asian subcontinent,19 therefore religion’s role in helping to boost up self-esteem is a common phenomenon.20 Religious doctrines protect a person against desperateness and boost self-esteem and self-confidence. The findings suggest that religiosity plays a significant role in determining the self-esteem which lowers the level of perceived discrimination and enhances stress related growth among HIV/AIDS positive patients.

Results of the present study supported the assumption that people living with HIV/AIDS showed negative association between self-esteem and perceived discrimination.

Findings of the present study confirmed that religion is directly positively associated with stress-related growth suggesting that if respondents’ religiosity level is high their stress related growth will also be high. Plausible explanation of this link is that religiosity plays an important role in the life of individuals and helps them to develop their personalities and serve as a force against odd situations in life.21,22

Self-esteem also appeared to be significantly associated with level of stress related growth. The results of correlation showed a positive (0.151) and significant (0.017) association between level of self-esteem and level of stress related growth among HIV patients.  Similarly, the result of regression analysis showed significant p-value for prediction. The results of present study corroborated with some previous studies as Schaefer and Moos (1992, 1998)23 suggested in their study that during the crisis, personal resources or characteristics of a human being that are self-esteem and perceptions of growth can help to support growth. It was also discussed by Park (1998)24 that the people are more inclined to identify, experience and report growth because of these resources which promote the perception of controlling/ overcoming the causes of stress and to achieve growth. It was also found in the study conducted by Abraido-Lanza et al. (1998)25 that growth among chronically ill Latinas was predicted by greater self-esteem. The results of present study proved that respondents with high level of self-esteem tend to have a high level of stress related growth.

The study proved that there exists a significant relationship of level of religiosity with self-esteem and level of stress related growth among HIV/AIDS patients. Religiosity boosts up the confidence and self-esteem and these individuals can overcome the perceived discrimination perpetuated by the family, friends or other members of the society. Their attitude remains positive in stressful and traumatic experiences of life by having high level of stress related growth. By planning and implementing such programmes at community level which target HIV/AIDS patients to enhance their level of religiosity and self-esteem, perceived discrimination may be reduced.

Recommendations: Qualitative studies may be conducted to have in-depth understanding of stress related growth among HIV/AIDS positive patients.