Stroke is known to be the major reason for both death and disability in many countries. In 2013, it was reported that globally there are around 25.7 million survivors of stroke, 6.5 million deaths due to stroke, 113 million disability-adjusted life-years (DALYs) lost due to stroke, and 10.3 million new stroke cases.1 The burden of stroke was mainly observed in developing countries and accounts for 75.2% of all stroke-related deaths and 81.0% of the associated DALYs lost.2

Stroke is the greatest risk factor for falls among the elderly population. This is caused by Balance alteration, a common outcome of stroke, affecting daily activities (ADL) and adding risk of falls in stroke patients.3 One of the stroke training programmes includes balance training that can enhance dynamic balance control and static postural sway.4 In stroke rehabilitation, a major concern which is the centre of attention is avoiding falls. For this purpose, balance training which reduces the risk of falls, is included as a vital component of this therapy.5

An emerging trend in physical fitness has been inspired by the invasion of a relatively new technology referred to as Active Gaming or Exer-gaming. It can be defined as a series of physical activities driven by technology, for example, a video game that requires players to be more physically engaged keeping them more active during the play; other activities are also more exercise based. It has also made it possible to put into practice the activities within secure, developed and challenging settings. This innovative technique termed as exer-gaming is an emerging expertise that is recently being vastly implemented in settings for physical and cognitive rehabilitation.6 These virtual environment-based gaming procedures have a great potential to enhance motor learning, thereby triggering motor areas of the brain that can give long-term and permanent results.6

Stroke patients face the aftermath of mobility and balance decline. Treatment options have to be explored to improve rehabilitation techniques and activities for enhancing independence level of these patients. Virtual reality permits the participants to perform different balance tasks in varying environments. The current study was planned to explore the effects of task specific balance training using virtual reality or exer-gaming via X-box 360 using a kinect in stroke patients. The results of this study will provide some insights regarding how to improve static and dynamic balance in stroke survivors.

A clinical trial was conducted on 30 stroke patients, experiencing the first episode, with a post period between six and twelve months, of either gender, with ages between 50 and 60 years. The sample size was similar to the size used in previous studies.7,8 The present study was ethically approved by the Research Ethical Committee of Riphah College of Rehabilitation Sciences, Islamabad, and was conducted in six months (from June 2016 to December 2016). All the participants provided written informed consent by signing or thumb printing the form. Participants having score 2-3 on Modified Rankin Scale were included in the trial and those with severe disability marking higher than 3 were excluded. Patients with co-morbidities like diabetes mellitus, hypertension and ischaemic heart disease, cognitive deficits, severe contractures, those who were unable to perform tasks, had complications of the joints that affected movement, had a history of recent fracture, arthritis and patients on drugs which could impair their physical function, were excluded. Patients able to sit and stand independently, having sufficient vision to see the television screen and characters clearly from a distance of three metres, were recruited.

Data was collected using purposive sampling technique, while sealed envelope method was used to randomly allocate the patients equally in two groups, i.e. exer-gaming group (EGG) and traditional balance training group (TBT) systematically. The intervention was planned for five days a week for a total duration of six consecutive weeks. Balance assessment was done vigilantly through berg balance scale (BBS) and mobility was assessed through timed up & go test (TUG) at the baseline before starting the intervention; the assessment was repeated after four weeks and additional two weeks. In order to minimise biased assessment, a blind assessor measured the baseline data at the beginning of the study and then after four weeks and six weeks of training. The total duration of the study was six weeks with minimum 30 sessions.

Task-oriented activities performed by the traditional group included side stepping, standing on wobble board, and sit to stand activity. Activities that included improving anticipatory balance were perturbation given externally, rising on toes and single leg stance. The detailed protocol of intervention given to the exer-gaming group is shown in table 1.

Final analysis was performed on 30 patients, with 15 patients in each group. Mean age of the participants was 53.3 ± 6.2 years. Sample included 60% male and 40% female patients. Further details of the demographic data are given in Table 2. 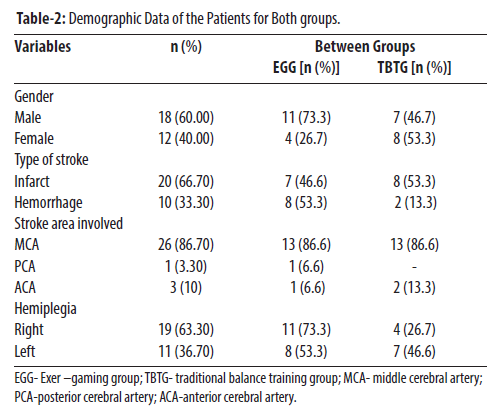 Statistical analysis was conducted using Statistical Product and Service Solutions (SPSS) Version 20.0.0 IBM. Independent samples T test was used to compare the two groups and showed a significant improvement (p>0.05) in dynamic balance and reducing falls in exer-gaming group in comparison to the traditional balance training group for both scales, i.e. Timed up and go test (TUG) and berg balance scale (BBS). However, the improvement was more prominent in the last two weeks of intervention; from week four to week six as shown in figure 1 and table 3. 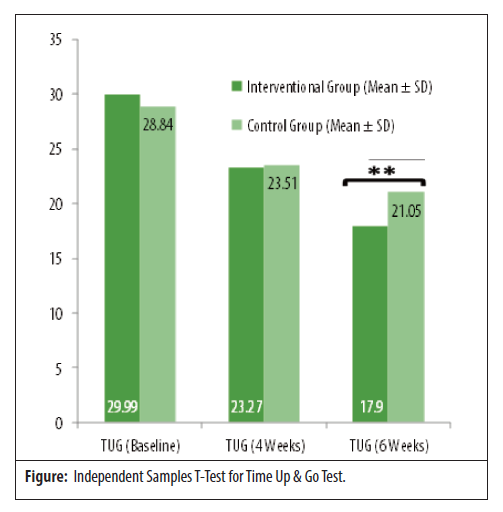 The current study suggested that virtual reality based or gaming-based rehabilitation balance training is superior to conventional treatment in stroke patients. Similar results were also reported by Malik et al using virtual reality in stroke patients9 and Barcala et al on balance assessment in hemi-paretic patients who were trained to improve balance using Wii Fit software-based gaming. Results of the study indicated gain in dynamic balance among the participants of both the groups.10

Another study based on exer-gaming using Wii fit was conducted by Bieryla et al in which balance training was given for three weeks and balance assessment was done using berg balance scale. This study concluded that virtual reality significantly improves balance in stroke patients (P <0.037).11 These results are coherent with results of the current study.

Although the present study adds to the evidence of effectiveness of exer-gaming based rehabilitation, it still lacks in sample size and does not target a particular stroke type. Future studies can be conducted on larger sample size and the effect of gaming can be compared in different types of strokes as well. Level of depression, fatigue and anxiety may also affect the level of physical activity and should also be considered as a variable.