This study was conducted on children between 2 and 10 years age to determine the frequency of hearing impairment in middle ear infection. It was a cross-sectional survey, done at Riphah International University from August 2018 to January 2019. Data was collected from the ENT Department of Children's Hospital Lahore through convenience sampling technique and included 52 patients with middle ear infection. Measurements for the level of hearing impairment were taken, and data was analysed using statistical package for social sciences, SPSS 20.0. Of the total 52 patients, 15 (28.8%) had ear infection once a month and 37 (71.2%) had it off and on. Mild hearing loss was determined in 35 (67.3%) patients,13 (25%) had moderate, 2 (3.8%) severe and 2 (3.8%) had normal hearing. It was concluded that most of the children with middle ear infections developed hearing loss.

Middle ear infection, or acute otitis media, is caused by fluid accumulation in the air filled space of the ear, which resultantly causes pain and inflammation because of the infective agents or infections and are linked to mild hearing loss.1-3

Infection of the middle ear because of a common cold is most common in children. Two responsible factors are weakness of the immune system and structure of Eustachian tube. Since the tube is horizontal it is difficult for the secretions of the ear to drain out, due to which it is easy for the infection to travel into the middle ear. Another predisposing factor is chronic adenoid infection or tonsillitis.4-6 Long-term hearing impairment may result in delay in speech, language and cognitive skill development, especially in commencing prelingually.7

Consequences and outcomes of middle ear infection include varied intensity of hearing impairment that leads to speech delays, development of cognitive skills and language. Consequences of impaired hearing include employment problems and other social interactions. There are a number of reports in literature which shows that school going children with impaired hearing are less successful in achieving life goals as compared to their peers. The same issues have been reported with all types of ear problems such as otitis media and middle ear infection.11

In 2016, Mulwafu et al conducted research in African region among population with hearing impairment. Data was gathered by using a standardised questionnaire and the limitation of this study was it was done on hearing impaired population only. Evidenced suggested that the rate of hearing impairment in Africa is higher and if it is not treated properly, it would increase with the passage of time.12 Kaspar et al in 2016, conducted research among younger and older population. It was found that mild hearing loss was most common in younger children because of middle and outer ear infections which are usually linked with respiratory infections, while moderate hearing loss was most common in elderly people — aged 80 years or more — which can be called age-related hearing loss.13,14 Research conducted in 2016 by Cruhan et al describe global percentage of hearing-impaired population to be almost 5.3 percent or 360 million; this is almost the same number considered hearing disabled by World Health Organisation.15 In 2015, Aarhus et al conducted population-based research among 32,430 adults aged 20-56 years and determined positive relationship between childhood hearing disorders and adult tinnitus.16 A pilot study was conducted in India among children with hearing impairment and found that infections of the middle and outer ear was common cause of hearing loss. this study was conducted in rural areas and the subjects were examined through Otoscope, tympanometry and audiometry. Conductive hearing loss was also observed.17-19

In China, a study was conducted among children with hearing impairment and age-related prevalence was found and classified; children aged 3-6 years had more hearing loss. It was 14% at the age of two years, 5 % in four years olds and 4.9% was observed at the age of five years.17

The study design was a cross-sectional survey, conducted for the duration of six months from August 2018 to January 2019 to find out the prevalence of hearing impairment caused due to middle ear infection. Study was conducted in Riphah University Lahore and Data was collected from ENT Department of Children's Hospital Lahore. Convenient sampling technique was used for this study. Sample size calculated was 41 on the basis of prevalence of unilateral hearing impaired 5.4%  in chronic otitis media20 by using 95% confidence interval and 7% confidence level through online sample size calculator.21 Fifty-two children, aged two to 10 years, both male and female, with middle ear infections were included in this study. Co-morbidities such as cerebral palsy, cleft palate, congenital diseases and any other structural deformity with ear infections were excluded. The Performa was developed from literature review and expert opinion was used for data collection. Content validity index was used for validation of content. Cronbach Alpha was used for internal reliability of the questionnaire. The questionnaire consisted of four sections: demography, reviews of systems, medical/family/social history, past surgery and medications. After approval from the research ethical committee of Riphah International University, Lahore, and taking consent from the parents, the researcher himself filled the Performa to collect the data. Visual reinforcement audiometry was used in patients below the age of four years, Play Audiometry was used in patients between age of four and five years, in those above the age of five years, audiometer was used to test hearing impairment. Tympanometry was used to assess the mobility of tympanic membrane. The data was analysed in Statistical Package for Social Sciences, SPSS 20.0. The qualitative variables were analysed for frequency/ percentage. 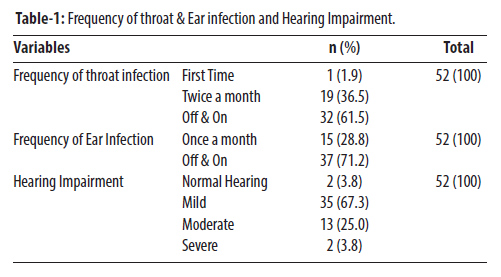 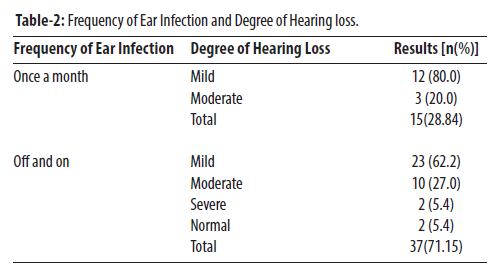 As shown in the table 2 mild hearing loss was found in 12(80%) of the participants who had ear infection once a month and 3(20%) participants had moderate infection.

Hearing loss was mild in 23(62.2%) of participants who had off and on ear infection and 2(5.4%) were severely impaired, while 2(5.4%) had normal hearing irrespective of ear infection.

Thus, it was concluded that most of the participants having middle ear infections experience hearing loss and had type B Tympanogram. It is recommended that these children should consult ENT surgeons and audiologists for hearing assessment.

Acknowledgement: I would like to thank my teachers Dr Nayab Iftikhar, Miss Hafsa Noreen for their ongoing guidance, support and help, and assigning an important topic for the study.

19.    Hall A, Wills A, Mahmoud O, Sell D, Waylen A, Grewal S, et al. Centrelevel variation in outcomes and treatment for otitis media with effusion and hearing loss and the association of hearing loss with developmental outcomes at ages 5 and 7 years in children with non‐syndromic unilateral cleft lip and palate: The Cleft Care UK study. Part 2. Orthod Craniofac Res 2017; 20: 8-18.