Objective:  To investigate the association between perceived primary parenting styles and attachment styles between single-parent children and children living with both parents.

Methods: The correlational study was conducted at the Lahore Garrison University, Lahore, Pakistan, from September 2017 to March 2018, and comprised an equal number of children from single-parent families and those living with both the parents. Data was collected using the parental authority questionnaire and the Urdu version of the inventory of parental and peer attachment. Data was analysed using SPSS 21.

Conclusion: It is important to understand the role of parents and different parenting styles in building up strong parentchild attachment.

Parenting style is a procedure through which parents show warmth, love and care towards their newborn child. The outcome of the parent-child relationship is the bond / attachment the child feels with his/her parents.4 The term ‘attachment style’ refers to the way a child relates to a primary caregiver figure. This will affect his life as an adult significantly, as the child relates to others in the context of previous intimate relationships as a child. A study on attachment styles viewed parental figures as safe / secure base for the children, defining attachment as a persisting passionate bond in an individual, which an individual forms with the caregiver.5

Attachment consists of two fundamental classifications: secure and insecure attachment. Insecure attachment consists of three main different types: insecure-avoidant, insecure-ambivalent, and insecure-disorganised. Secure attachment is characterised by the toddler being safely appended to his / her parent. Such children are sure that their parents will be receptive to their needs and they can communicate with them easily. Anxious-ambivalent attachment signifies the unusually anxious and upsetting reaction of the toddler when her mother is away / not present. When she returns, the child is generally ambivalent i.e., clingy and upset with the mother at the same time. Anxious-avoidant attachment means the child maintains a distance from or disregards the caregiver, indicating little feeling when the parental figure withdraws or returns.6

The importance of children’s attachment with the caregiver has been stressed. It has a profound impact and influence across the life-span. It influences their personal development throughout their lives. The attachment / bond the child forms with the caregiver in the early stages of life will determine the capacity to form enthusiastic interpersonal relationships and have intimate "attachment" to someone else as an adult.7

There has been a considerable amount of research conducted on attachment and its consequences on children’s development. Parenting style has a significant relationship with the nature of mother-child attachment in various developmental stages, like middle childhood and youth. A positive association exists between authoritative parenting and secure attachment. Negligent parenting on the other hand results in avoidant attachment. Parenting style has an impact on the achievement of children as well.8 Researchers also found that authoritative parenting styles had a negative correlation with the academic performance of college students. Studies also suggest that there is an inter-relationship between different attachment styles and parenting styles. Harshness, yelling, shouting and threatening behaviours with children result in conduct issues, aggression, higher externalising and developing antisocial peer affiliations.9

The current study was planned to assess the association between different types of parenting and attachment styles of single-parent children and those living with both the parents.

The cross-sectional study was conducted at the Lahore Garrison University, Lahore, Pakistan, from September 2017 to March 2018. After approval from the institutional ethics review board, the sample was raised using stratified purposive sampling technique from among children aged age 11-18 years. Single-parent children were enrolled from a public-sector child protection agency, while those living with both the parents were enrolled from the community. All the subjects were studying in private schools and were enrolled in grades from the 5th to the 10th.

Data was collected after obtaining informed permission from school authorities and the child-protection agency, and consent from all the participants. Permission to use data-collection tools were obtained from the authors concerned. Demographic details were noted on a personal information sheet. Participants were administered the Parental Authority Questionnaire (PAQ)15 whichi is a 5-point Likert scale. The Urdu version of PAQ16 was used. There were 60 items that were structured into three subscales: authoritarian style, authoritative style, and permissive parenting style. The coefficient of reliability for the present sample among all three types of parenting styles were 0.83, 0.74 and 0.73 respectively.

To assess parental attachment, the Inventory of Parental and Peer Attachment (IPPA) was used.17 It is a self-reporting questionnaire scored on a 5-point likert scale, and comprising three subscales for father and mother, namely: trust, communication and alienation. The internal consistency was 0.77 for mother and 0.75 for father. The Urdu version of the inventory was used.18

Data was collected in group settings.

The sample size was determined using the ratio of the number of subjects (N) to the number of items (p), and this varies from three to five subjects per item.19 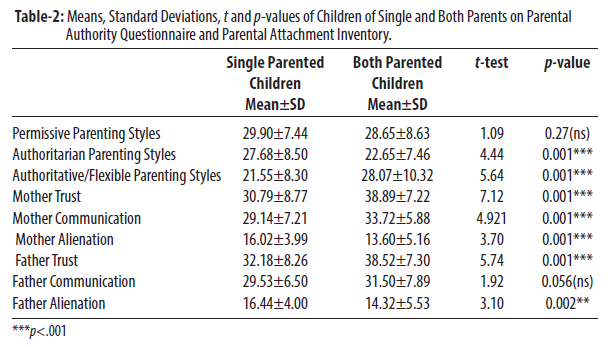 There was a significant difference between males and females on perceived parenting and attachment styles of children living with single and both parents (Table 3). 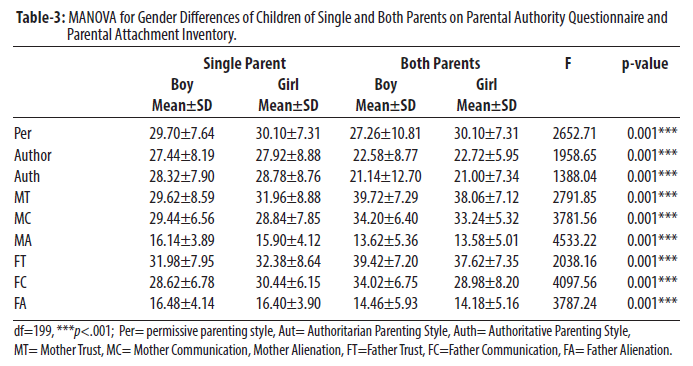 Attachment with the caregiver is a deep-rooted basic need and has the capacity to shape and sculpt an individual.20 This attachment has a long-lasting impact on a child’s progress and development. Child-parent attachment generalises to other relationship-specific domains, like partners, close friends, romantic partners, teachers, etc. Many studies have highlighted the impact of parenting and attachment styles with respect to academic performance, and mental health problems etc.21

Forming a close bond and depicting different attachment behaviour is dependent on the context. The findings of the current study showed that there was a negative relationship between permissive and authoritarian parenting styles with parental communication and trust. Authoritative parenting had positive relationship with parental communication and trust and negative relationship with feeling alienated from parents. Studies have indicated a positive association between authoritative parenting and secure attachment, whereas negligent parenting predicted avoidant attachment.22 Children of divorced parents manifest lower well-being and functioning than their peers, function less well at school, and exhibit more behavioural problems and emotional problems, like anxiety, depression, low self-esteem.23

Another important finding of the current study was that single-parent children perceived their parents as authoritarian and had more alienated attachment with parents, whereas children living with both the parents perceived their parents to be more authoritative, but had more trust and better communication with their parents. The study supports the fact that increase in the social demands of society makes single parents more prone to psychological distress, which, in turn, adversely affects their parental functioning.24 In many cultures, women are largely responsible for upbringing of their children after a divorce. Constant exposure to stress, decline in the standard of living, and financial pressures make them vulnerable to mental and physical health problems, compelling them to use more harsh disciplinary methods, such as corporal punishment. This is due to their need to control their children’s behaviour against the backdrop of tough life conditions and to protect them from harsh realities of life. Secondly, single mothers exert harsh discipline and control to maintain their parental authority which is due to lack of time, absence of financial support, lack of patience, the need for practical help and emotional support or the fear of losing the children.24

The current study is useful in determining children’s behaviour associated with parenting style. Further studies should be taken into consideration in different cultures and social setups.

The current study has its limitations. It was a cross-sectional study which did not touch long-term effects that a longitudinal study would have done. In addition, only urban population was part of the sample, which meant absence of comparison between urban and rural populations. Finally, variables like mental health; bullying, post-traumatic stress was not studied.

Parents’ positive practices, like sensitivity, responsiveness and consideration, towards their youngsters strongly affected their mental prosperity.

Disclaimer: The text is based on an MSc thesis.

10.    Akhter Z. The effect of parenting styles of parents on the attachment styles of undergraduates students. Language in India: Strength for today and bright hope for tomorrow 2012; 12: 555-66.

14.    Safdar S, Zahrah SM. Impact of Parenting Styles on the Intensity of Parental and Peer Attachment: Exploring the Gender Differences in Adolescents. Am J Appl Psychol 2016; 4: 23-30.

20.    Kerns KA, Brumariu LE. Is insecure parent-child attachment a risk factor for the development of anxiety in childhood or adolescence? Child Dev Perspect 2014; 8: 12-7.

22.    Marco A, Jaap D. Effects of Divorce on Children's Educational Attainment in a Mediterranean and Catholic Society Evidence from Italy. European Societies 2009; 11: 137-59.