Exploring speciality preferences and the influencing factors among undergraduate medical students at University of Kufa, Iraq: A questionnaire-based cross-sectional survey

Objective: To explore medical students' preferences of career specialisation, and to investigate the factors that influence their choices.

Method: The cross-sectional study was conducted at the University of Kufa, Iraq, from January 27 to February 21, 2019, and comprised medical students from the second to the sixth years. Data was collected using an anonymous, structured, self-administered questionnaire.  Data was analysed using SPSS 25.

Conclusion: Being passionate about a speciality was the major influencing factor for students while selecting their future speciality.

The medical education system comprises of many clinical and non-clinical branches that students have to study during their undergraduate training. Given the multiple options and the various factors that influence it, the choice of specialties can be a difficult decision.1 First preferences are rarely fulfilled. Because of the vague images that students hold in their minds of the specialties, their preferences change regularly during their years of study according to exposure and experience.2

It is crucial to understand the factors that influence students' selection of their future careers as certain decisions and policy changes can improve their distribution in the medical workforce, especially with the rising imbalance in the health manpower over different specialties and the resulting shortage in some areas and crowding and tough competition in others.3

Despite the importance of the subjects, there is limited data about what motivates Iraqi medical students towards a particular speciality. This knowledge can help improve the recruitment of students into specialties that are less favoured and have a shortage of working specialists. Few studies were undertaken in Iraq to examine these factors, and it appears that personal interests and better income were the major determinant factors of choosing a speciality. Internal Medicine and General Surgery were the most selected ones among all other careers.4

There is also a gender variation in the choice, with Paediatrics and Obstetrics and Gynaecology (OB-GYN) being more preferred by female students compared to males.5

Furthermore, the healthcare workforce is affected by violence and political unrest in the country. This makes students prefer to choose branches with less mortality rate, and fewer confrontations with patients' relatives to avoid being threatened or psychologically or physically harmed or injured.6,7

The personality aspect of the students has been examined, and some studies have shown that not only external factors affect students' choices, but also internal factors and traits like agreeableness, openness, extraversion, conscientiousness and neuroticism.8

The current study was planned to examine the factors that influence the selection of future specialties by undergraduate medical students.

The cross-sectional study was conducted at the University of Kufa, Iraq, from January 27 to February 21, 2019, and comprised Kufa Medical College students of both genders from the second to the sixth years. After approval from the institutional ethics review committee, the sample size was calculated using the standard N=Z2pq/d2 formula related to cross-sectional studies,9 where N = sample size, Z standard statistics for 95% confidence level = 1.96, p = proportion of students with certain selection of speciality, which was kept at 50% to get a larger sample size, q = 1-p, and d = value of precision or absolute error which was kept at 0.05. The calculated sample size was 384, but it was enhanced by 20% to account for possible non-response.

The sample was raised using non-probability convenience sampling technique, inviting all students from the second to the sixth year. All completely filled questionnaires were included.

Those excluded were students who had initially participated in the pilot study, and the students who were involved in the study. Additionally, all questionnaires that were not completely filled were excluded.

After informed written consent from the students, data was collected using an anonymous, structured, self-administered questionnaire which was in the English language. For content validity, the questionnaire was pre-tested through a pilot study comprising 60 participants. After panel review, the questionnaire was distributed by hand among the students. It consisted of three sections. The first one involved demographic data including age, gender, city of birth, year of study and the presence of a doctor in the family. The second section involved a list of specialties broadly segregated into surgical, medical and basic medical sciences. The students had to choose only one. Students who had not decided their speciality yet could choose 'none'. Additionally, they could choose 'Other' and write the speciality if the field of their interest was not mentioned in the questionnaire.

The third section involved the causes and factors that made them choose the speciality. The factors listed were 'passion', 'income', 'family member inspiration', 'mentor inspiration', 'reputation', 'less on-call duties', 'less competition', 'number of residency years' as well as 'Other' as an option for causes that were not mentioned, in which they could specify their own reasons. 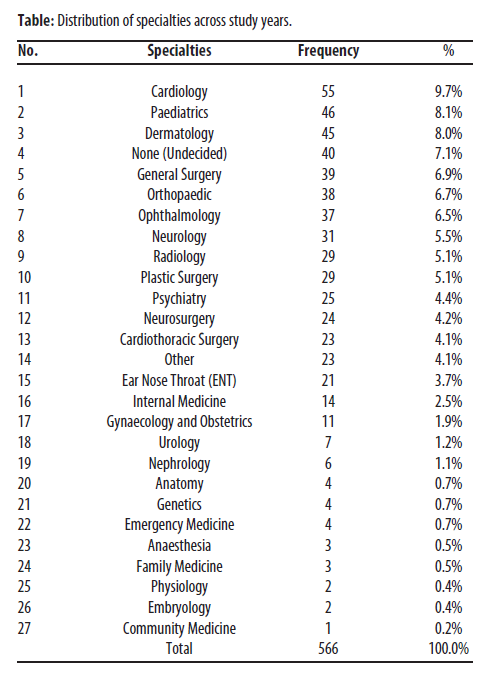 Also, 40(7%) students had not decided yet, while 23(4%) students chose the 'Other' option, mentioning, among others, Endocrinology, Forensic Medicine, Nutritional Medicine, Oncology and Haematology as their choices.

There was gender variation in the choice of specialties, with surgical specialties, like Orthopaedic Surgery, Cardiothoracic Surgery, General Surgery, Neurosurgery, and Ophthalmology, having a strong male predominance, with the difference in the case of Orthopaedic and Thoracic surgery being significant (p<0.05). Females tended to choose Paediatric, Radiology and OB-GYN (Figure-1). 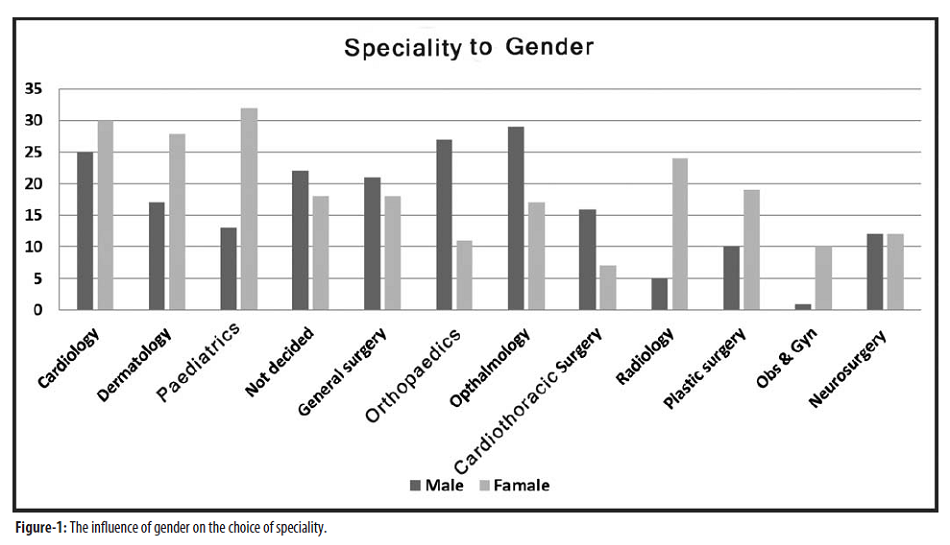 In terms of reasons, the male gender was significantly associated with 'income' (p≤0.001) and 'reputation' (p<0.001, while females tended toward 'less on-duty calls' and 'family member inspiration' though the association was non-significant (p>0.05) (Figure-2). 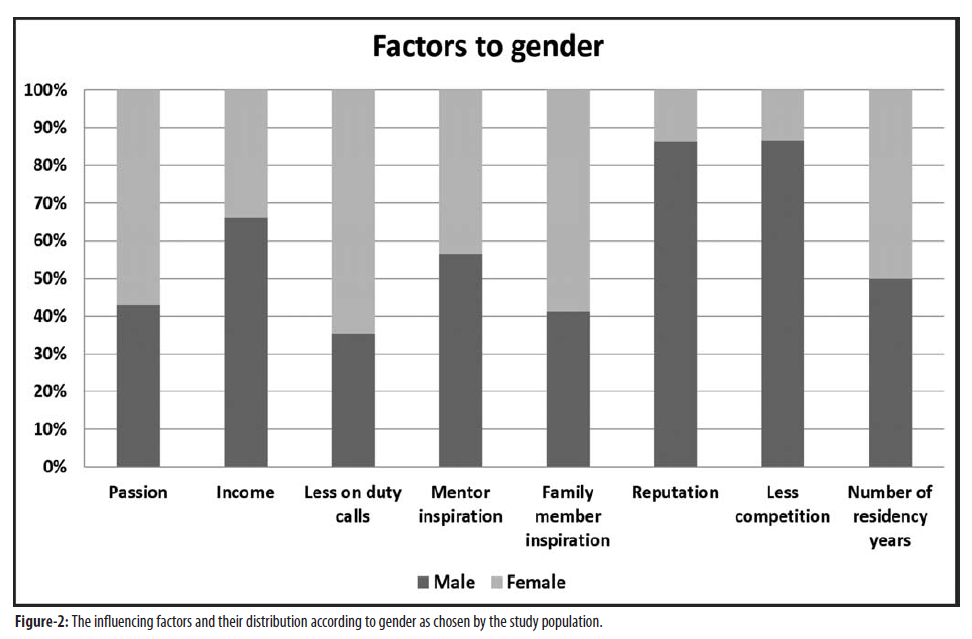 The findings showed that the majority of students made their choices based on a genuine personal interest in that particular speciality. The top three chosen specialties were Cardiology, Paediatrics, and Dermatology.

The current study establishes a baseline data about specialty choices and what influences them, and sets a starting point for future studies. Although it remains among the top five specialties chosen, General Surgery has dropped in preference, and there is a striking absence of Internal Medicine from the top 10 specialties compared with results from a previous study done in Iraq.4 These finding come in contrast with the findings of different studies conducted across the globe that found Internal Medicine and General Surgery to be among the most chosen specialties.1,3,10,11

This dramatic fall of Internal Medicine as a choice may be explained by the student's desire towards sub-specialisation, which is reflected by the fact that Cardiology, a sub-speciality of Internal Medicine, topped the table as the most chosen. However, the absence of bias cannot be confidently claimed, as most of those who selected Cardiology were from the 2nd and 3rd years of studies, who had just taken the cardiovascular system module, and they may well change their minds in the years ahead if a follow-up study is performed.

OB-GYN was one of the most preferred clinical specialties in several studies,4,12-16 while it was not even in the top 10 in the current study.

Not surprisingly, OB-GYN showed a prominent female predominance, while Orthopaedic Surgery showed the opposite. The finding is consistent with a previous Iraqi study.5 This finding may be related to religious or cultural reasons within the local community, as female patients often prefer to be examined by female doctors leaving little opportunity for male doctors in the field.

The current study showed that final year students were more likely not to choose any specialty as they had not decided yet. This finding comes in contrast with results from a Polish study which found that the percentage of undecided students in the sixth year was low and the majority of students had made up their minds at that level.17

Meanwhile, a study done in Saudi Arabia showed that 'not decided yet' was the third most common option, which is almost similar to the current study in which it came fourth.18

Another study done in Latin countries found that female students tended to choose Dermatology, Paediatrics, OB-GYN, while male students tended to choose General Surgery, Neurology and Cardiothoracic Surgery.14 These results are consistent with our study. In contrast, males chose Plastic Surgery more than females, and this is contrary to the current study which showed the opposite.14

Community Medicine, Family Medicine, Anaesthesia, and Basic Sciences were among the least favoured specialties in the current study, which is in concordance with studies in different countries.12,14,19,20 It could be explained by the little clinical exposure to these specialties and the superficial focus of the medical curriculum.12,14,21

Female students showed a tendency to think less about income, prestige, and competition, yet made more concern about job hours, duty calls and the number of residency years which may all impact future family life, and responsibilities. These results are consistent with various studies.22-24

As observed, the most influencing factor for choosing a speciality was primarily based upon personal interest.  This   observation is  similar  to  the  results  of  many studies4,12,14,22,25,26 and  is  followed  by  the  anticipated  income, which was also the  first  and second  influencing  factors  in  an Iraqi  study.4 Other  studies found different factors; for example, a  Jordanian study suggested that  students  were  influenced  by  the  intellectual  content  of  specialties,19 a Turkish  study found that students  were  more  influenced  by  prestige  and  money,27 while  Saudis  opted for  humanity.28

The current study had a high response rate of 94% with a sufficient number of participants, and also included students from different years who were studying both clinical sciences and basic sciences.

However, it has some limitations as well, like all students were from only one college and the results may not be generalised across the country. Also, there were more female representation and approximately half of the study population was from the second and third years, indicating selection bias.

Further, the study measured the "intention" to choose rather than the actual choice itself as students may change their minds as they advance in their course of studies or may not score high enough to be accepted in their desired specialties.

A follow-up study is recommended to determine whether students change their preferences as they progress, and to explore why certain disciplines are less favoured by the students.

Personal interest was found to be the major influencing factor for students while selecting their speciality options. The next most important reasons were 'income', 'less on-call duties' as well as 'family member inspiration'. Males were more likely to choose based on 'income' and 'reputation', while females tended to choose on the basis of 'less on-call duties'. The three most commonly chosen specialties were Cardiology, Paediatrics and Dermatology.

23.    Gabram SGA, Hoenig  II J, Schroeder  Jr JW, Mansour A, Gamelli R. What Are the Primary Concerns of Recently Graduated Surgeons and How Do They Differ From Those of the Residency Training Years? Arch Surg. 2001; 136:1109-14.