Merkel cell carcinoma (MCC) is a rare cutaneous neuroendocrine cancer that shows aggressive biological behaviour. Although it usually occurs on sun-exposed areas, it can sometimes be seen on non-sun-exposed sites. Here, we present the case of a 66-year-old woman with MCC arising from the right gluteal region that was treated with excision and adjuvant chemoradiotherapy. On follow-up after the 24 months, the patient was disease- and recurrence-free, representing the longest survival among patients with gluteal MCC. Early diagnosis and treatment are important to improve survival rates in patients with non-sun-exposed MCC.

Merkel cell carcinoma (MCC) is a rare, aggressive, cutaneous neuroendocrine cancer, which is often seen in older and/or immunocompromised patients and on the sun-exposed areas of the body. Itis most commonly seen in the head and neck, upper limbs, lower limbs and trunk, but rare cases have been reported in vulva, penis, pharynx and oral mucosa. The patients usually present with a fast growing mass causing deformation on the skin. The diagnosis requires histopathological confirmation.1,2

To the best of our knowledge, only eight cases of gluteal MCC have been published in the English literature3-10 (Table-1). Here, we report an additional case of gluteal MCC and discuss clinical characteristics and treatment options, by comparing our case with earlier cases.

Written informed patient consent was obtained for the publication of the case report. The case was seen in July 2018 at Adiyaman Training and Research Hospital. A 66-year-old woman was admitted to the department of surgery with the complaint of painless swelling and redness of the skin in the right gluteal region. She had a history of diabetes mellitus, hypertension and coronary artery disease, as well as a history of endovenous laser therapy applied to the bilateral lower extremity veins. An 8cm mass in the right gluteal region, which caused discoloration of the skin, was observed during physical examination. Tru-cut biopsy of the lesion revealed a tumour consisting of cells with small-to-medium sized nuclei with fine chromatin and scant cytoplasm (Figure-1) which showed immunohistochemical positivity for pancytokeratin, cytokeratin 20, epithelial membrane antigen [EMA], chromogranin and neuron specific enolase (NSE) (Figure). 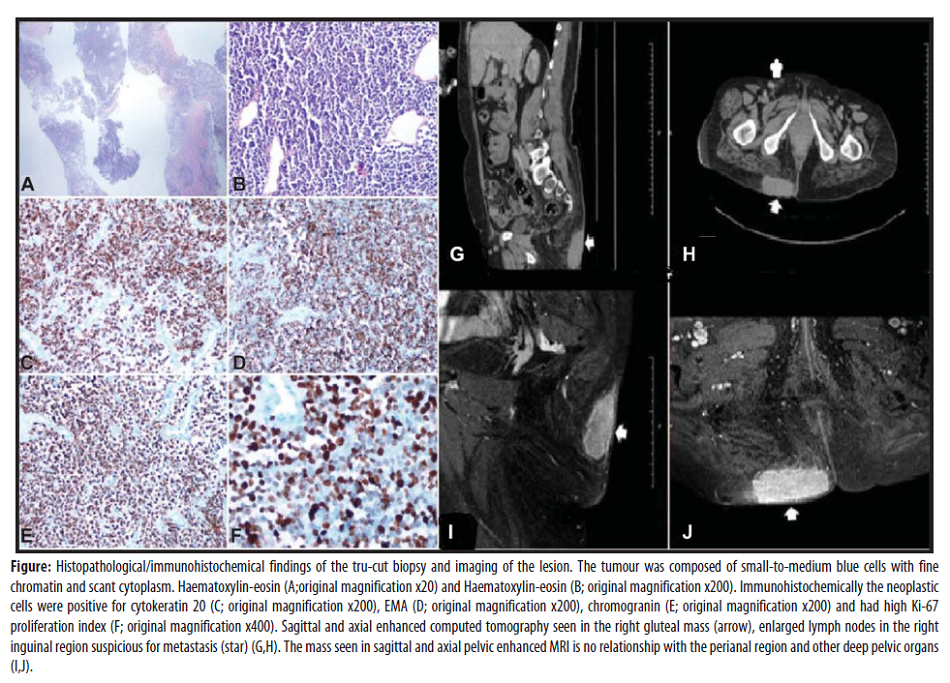 The tumour cells were also weakly positive for synaptophysin and CD99 and had a high Ki-67 proliferation index, but were negative for thyroid transcription factor-1 (TTF 1), cytokeratin 7, vimentin, HMB-45, S100, smooth muscle actin (SMA), desmin, myogenin and CD45. Therefore, the diagnosis of 'neuroendocrine carcinoma consistent with Merkel cell carcinoma'' was made.

Following the histopathological diagnosis, a thorough radiological examination was performed, including pelvic magnetic resonance imaging (MRI), thoracoabdominal computed tomography (CT), whole body positron emission tomography-computed tomography (PET/CT), in order to reveal the possible relationship of the deep part of the lesion with the perianal region and to investigate distant metastasis (Figure-1). Pelvic MRI showed no relationship with the perianal region and other deep pelvic organs. While nothing was found in the distant organs, metastasis was observed radiologically, as there were enlarged lymph nodes in the right inguinal region that were suspicious for metastasis. Although tru-cut biopsy of the suspicious lymph nodes were negative for malignancy, the possibility of partial tumoral involvement and/or micrometastasis could not be ruled out. It was decided to excise the mass with clean wide surgical margins and unilateral inguinal lymph node dissection followed by adjuvant radiotherapy and chemotherapy.

A 7.5x7x3cm white-to-tan tumour was detected in gross examination of the excised specimen, which was morphologically identical to the tumour in the initial tru-cut biopsy. No lymphovascular and/or perineural invasion was observed. Two of the 10lymph nodes were metastatic. The surgical margins were negative for malignancy.

The patient was evaluated as T3N1bM0 (Stage 3B) according to the criteria of the American Joint Committee on Cancer Staging System 8th Edition11 and was administered radiotheraphy and chemotheraphy (four cycles of Cisplatin 25 mg/m2 and Etoposide 100 mg/m2). The patient was disease- and recurrence-free at 24-month follow-up.

Merkel cell carcinoma (MCC) was first described by Dr. Toker in 1972 as trabecular carcinoma of the skin. It is thought to be caused by Merkel cells located in the basal layer in the epidermis. Several etiological factors such as exposure to ultraviolet light, exposure to arsenic and risk factors, such as history of chronic lymphocytic leukaemia, congenital dysplasia syndrome, viral infections (HIV, Merkel cell polyoma virus) and immunosuppression after organ transplantation, have been documented to date. Becker et al have reported that the incidence of MCC is 15 times higher in patients who have undergone immunosuppressive/organ transplantation, as compared to the normal population.12 Our patient did not have any of these etiological and/or risk factors, however, the presence of Merkel cell polyoma virus could not be investigated.

MCC is a locally aggressive tumour with possibility of distant metastasis and is more likely to occur in areas that are mostly exposed to the sun. Although rarely, it can also be seen on areas not exposed to the sun. Marcoval et al have observed that patients without sun exposure have a worse prognosis than those with sun exposure.13

Table-1 shows the characteristics of the patients diagnosed with gluteal MCC reported to date.

Many entities should be considered in differential diagnosis including basal cell carcinoma, melanoma, metastatic neuroendocrine carcinoma, Ewing's sarcoma, lymphoma and squamous cell carcinoma.13 In our case, these entities were carefully excluded by immunohistochemical analysis.

Meckel cell carcinoma is a rare disease and the surgical approach cannot be standardised due to its occurrence in different anatomical locations, which limits treatment options. However, there is consensus about the local excision of the tumour with a 1-2cm clear surgical margin. In patients with smaller tumours (<1cm), unfavourable prognostic factors such as lymphovascular invasion and immunosuppression are not expected and, therefore, wide excision is considered sufficient; on the other hand, for masses larger than 1cm and in patients with unfavourable prognostic factors, local lymph node dissection and adjuvant radiotherapy are recommended with wide excision.3 The main method of treatment for metastatic disease is single agent or combination chemotherapy. Regimen with the combination of Cisplatin or Carboplatin with Etoposide, Cyclophosphamide with Doxorubicin, Vincristine are used. In addition, Avelumab, Nivolumab and Pembrolizumab can be given as immunotherapeutic agents as another treatment option in patients with metastatic MCC. Other than these treatment options, the use of Phosphoinositide 3-kinase inhibitors, the mammalian target of rapamycin [mTOR] pathway inhibitors, apoptotic inhibitors, receptor tyrosine kinase inhibitors and octreotide have also been used in the treatment of MCC.14

We reported the ninth gluteal MCC case in the literature and to the best of our knowledge, the first female case of gluteal MCC. Lack of any significant risk factors in the aetiology is also noteworthy. Although the patient was evaluated as Stage 3B, disease-free and recurrence-free survival longer than 24 months could be achieved with a treatment strategy that included wide excision with local lymph node dissection and adjuvant chemoradiotherapy.

Patient Approval: An informed consent form was obtained from the patient for publishing of this paper.