Ovarian cancer is the second biggest cause of gynaecological cancer related death in elderly women which is uncommon during reproductive age. We, herein present a thought-provoking case of an infertile woman who was diagnosed with stage IVA ovarian cancer just one year after the In Vitro Fertilisation cycles. A 37-year-old woman with secondary infertility who underwent three cycles of ovarian stimulation, had two grade II cleavage-stage embryos transferred, though they did not result in pregnancy in two years. During the IVF treatment, ovarian cyst puncture was performed and no malignant cells were observed. The following year, she suffered from abdominal pain with extremely elevated tumour markers and stage IVA ovarian carcinoma was confirmed by transabdominal operation. The patient underwent cytoreductive surgery and chemotherapy; however, she was insensitive to postoperative chemotherapy with poor CA 125. The case aroused high attention regarding safety of IVF including standardisation and close long-term follow-up.

Ovarian cancer has been ranked as the second highest cause of gynaecological malignancy death worldwide. Approximately 7% of this disease occurs in women under the age of 40.1 Infertility affects one in six couples of childbearing age.2 Ovarian stimulation and In Vitro Fertilisation (IVF) have been used to treat infertility for over the past four decades.

Recent evidences implicate that infertility treatment and ovarian stimulating drugs may increase the likelihood of invasive ovarian cancer.3 Still, the direct correlation of IVF procedure and ovarian cancer is seldom reported. In this report, we present the case of a premenopausal woman who was diagnosed with advanced ovarian cancer just following one year of IVF.

A 37-year-old woman with BMI 22.96 and normal CA 125 level had experienced secondary infertility for two years when she sought help from assisted reproduction due to tubal factors in July 2017 at Anhui Provincial Hospital in China. Without any history of familial ovarian cancer and fertility drugs, the patient experienced pregnancy termination in the first trimester and cheilopalatognathus. Subsequently, poor uterine mobility, sacral ligament tenderness and tubercula dolorosum were revealed during routine gynaecological examination. Prior to her first IVF cycle, two antral follicles <5 mm in the left ovary and a diameter of 30mm echoless tissue in the right ovary were observed, the hormonal levels on the same day were E2 at 442 pg/mL, FSH at 6.66 mIU/mL, and LH at 4.62 mIU/mL. The echoless was speculated to be follicular, thus, 0.1mg GnRH-a was administered to stimulate oocyte ovulation; however, 40x45-mm cyst still remained 48h later. Ultrasonography-guided transvaginal puncture of the ovarian cyst was performed using 35cm 16G oocyte aspiration needle, abundance of red blood cells, few epithelial cells and no malignant cell were observed in 20ml puncture fluid, which presented as light red clear fluid. Without bilateral ovarian cyst, half dose of long-acting GnRH agonist 1.875mg was injected, the patient received 750U Gonal-F, 3525U FSH and 3975U HMG. Growth hormone (4U qod) was given throughout COS. After 28 days of stimulation, 250µg Ovidrel (EMD-Serono) was triggered with a peak of E2 at 2968pg/mL, progesterone at 0.76 ng/mL, and LH at 1.21 mIU/mL. Then, six mature oocytes were harvested for IVF and six embryos were observed. Finally, two fresh cleavage-stage embryos at grade II were transferred; however, the patient's endometrium was 9.5mm and she did not get pregnant. It should be noted that none of the other embryos developed to blastocyst stage.

Subsequent examination in November 2017 revealed raised level of tumour marker CA 125 at 41.6U/ml (Normal range: 0-35U/ml), double long-acting GnRH agonist was administered for regulation. Finally, the second cycle was cancelled due to poor response with the max follicular diameter at 12.5mm after COS for 16 days using HMG 2400U and FSH 600U, the peak estradiol level was 132 pg/mL.

At the age of 38, she underwent a GnRH antagonist protocol, the dosage of gonadotropins was 2100U HMG. Once daily Ganirelix acetate (0.25 mg; Merck) was given to suppress ovulation for four days when the dominant follicle was 13 mm. After nine days of stimulation, a 18.5mm follicle was observed in the left ovary with E2 at 311 pg/mL, LH at 60.48 mIU/mL and progesterone at 1.9ng/mL. Finally, the last cycle ended in unexpected ovulation, while OPU was performed eight hours after the administration of the ovulatory trigger using HCG 10,000U. 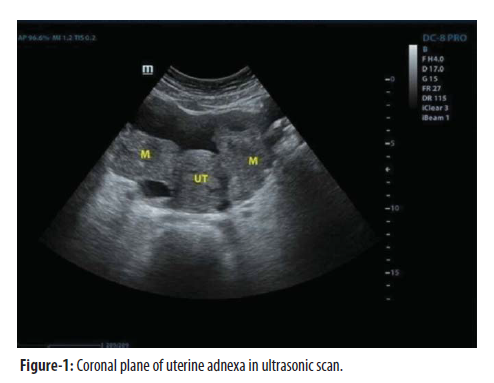 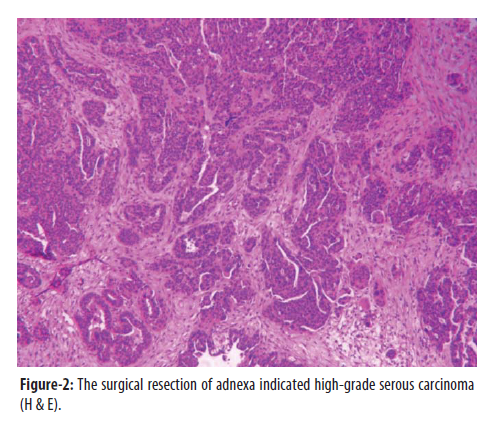 After tumour and metastases were removed through cytoreductive surgery CA 125 level dropped to 41.09U/ml. However, it again rose up to 102.1U/ml after administration of 500mg Carboplatin and 260mg Paclitaxel. With alternative treatment of 0.4g Bevacizumab, 100mg Cisplatin and 1.5g Gemcitabine, the tumour marker declined slowly. At the end of nine cycles of chemotherapy triweekly, the indicator fell to 15.59U/ml.

Here, we report a case of a woman of reproductive age who was diagnosed with advanced ovarian cancer a short time after IVF treatment. The retrospective case made us think about clinical diagnosis and treatment. For diagnostic purposes of ovarian masses, pelvic colour doppler ultrasound and tumour markers such as CA 125, CA 199, HE4 and MRI should be performed. Based on the elevated CA 125 and positive physical sign in gynaecological examination, laparoscopy should be the first choice for the diagnosis and treatment of suspected endometriosis. Due to the risk and complications of ONAB, we should focus on indications, carry out standardisation operation and periodic review after operation. Repeated high-dose of ovarian stimulation during a short time might increase the risk of ovarian tumours, especially in oestrogen-sensitive population.

A national cohort study with follow up for two decades found the risk of ovarian cancer in ART-treated women with an increased endometriosis of 4-fold.4 Due to the cancer-like features, growing concerns of women with endometriosis during IVF treatment might lead clinicians to consider comprehensive screening.

Infertility is also considered a risk factor for ovarian cancer due to genetic predisposition, nulliparity and use of postmenopausal hormonal replacement therapy. A nationwide population-based study had suggested that higher incidence of ovarian cancer was seen in infertile women, especially in those diagnosed with endometriosis.5 The mechanism behind carcinogenesis may be associated with DNA damage and mutations, which are caused by successive oxidative stress in a protumoral microenvironment.6

Ovarian stimulation is a major concern for ART procedure. Whether the exposure to fertility drugs increase the risk of ovarian cancer is still debatable. To evaluate the long-term safety of ART, a registry-based study was previously performed in Norway between 1960 and 1996. The data showed that clomiphene citrate may be linked with increased risk of ovarian cancer.7 An association between borderline ovarian tumours and infertility drugs, especially HMG and progesterone were observed in a case-control study.8

Ovarian needle aspiration and biopsy (ONAB) is performed for intraoperative diagnosis of gynaecological malignancies and are widely used to evaluate ovarian masses. The positive predictive value was 100% whereas the negative predictive values varied widely from 96% to 100% in current studies.9 Although this operation is relatively safe for cytology, puncturing the ovarian masses containing malignant tumours would break the integrity of the ovarian capsule which may increase the risk of malignant cell seeding and cancer upstaging.10 In this case, before predicting the diagnosis of malignancy by tumour marker and pelvic colour doppler ultrasound, ovarian needle aspiration should not be carried out. Additionally, poor prognosis on ovaries with repeated high-dose COH may spread the primary lesion though ONAB although no malignant cells were seen.

Although ovarian cancer seldom occurs during the reproductive age group, this paper describes a case which may be associated with IVF procedure. For example, based on the Chinese Guidelines of Clinical Practice of Assisted Reproductive Technology in 2018, there are no specific restrictions on the age for IVF. Thus, further larger scale multicentre RCTs are needed to monitor the long-term safety of IVF, especially for women older than 35 years.

The case had aroused interest in standardised operation and close follow-up involved in the safety of IVF. Improper management of treatment may be detrimental to the prognosis.

Acknowledgment: We greatly thank the participant's consent for publication of her medical records. The authors thank Dr. Xiaohua Jiang for his great efforts to review the manuscript.

Conflict of Interest: All authors declare that they have no conflicts of interest.