Brown tumour (BT) is the pathological expression of osteitis fibrosa cystica which is caused due to primary and secondary hyperparathyroidism (HPT). It is a rare benign lesion of skeletal system that usually affects the facial bones, clavicles, ribs, pelvis and extremities. The purpose of this case report is to present the clinical, pathological and radiological findings of BT — rarely seen in adults - originating from the giant parathyroid adenoma and emerging as the first clinical sign of HPT. The patient underwent a successful parathyroidectomy and was discharged on the first postoperative day without any complications. Histopathologically, it was confirmed as parathyroid adenoma. With the increased use of biochemical tests, HPT is diagnosed and treated early and so the frequency of symptomatic HPT due to parathyroid adenoma has decreased in developed countries, but we still sometimes encounter cases of primary hyperparathyroidism (PHPT) occurring as BT. With multidisciplinary preoperative evaluation, surgical resection of bones is refrained from in order to prevent unnecessary morbidity and mortality, unless these osteolytic bone lesions cause a pathological fracture.

In primary hyperparathyroidism (PHPT), the most common clinical finding is asymptomatic hypercalcaemia with normal or high serum parathormone (PTH) levels detected during routine biochemical examination.1 The most common causes in PHPT are parathyroid adenoma (80-85%), parathyroid gland hyperplasia (15-20%), multiple parathyroid adenoma (5%) and parathyroid cancer (<1%).2 Osteitis fibrosa cystica with pain in the bone and subperiosteal bone resorption is seen more commonly in patients with severe disease, especially parathyroid carcinoma, and the bone tissue is replaced by fibrous tissue known as brown tumour (BT) as a result of osteoclastic resorption due to increased PTH levels.3,4

A 47-year-old woman was referred as an outpatient to the orthopaedic department in November 2019, with increasing pain and weakness in her right inguinal space for six months. On physical examination, a palpable mass was detected in the right acetabular region, and the right hip movements were minimally restricted. A massive lesion in the right acetabulum, extending towards the superior pubic ramus anteromedially, filling the medullary bone with intense contrast enhancement, was observed in the right hip on contrast-enhanced MRI (magnetic resonance imaging) (Figure-1a, 1b). 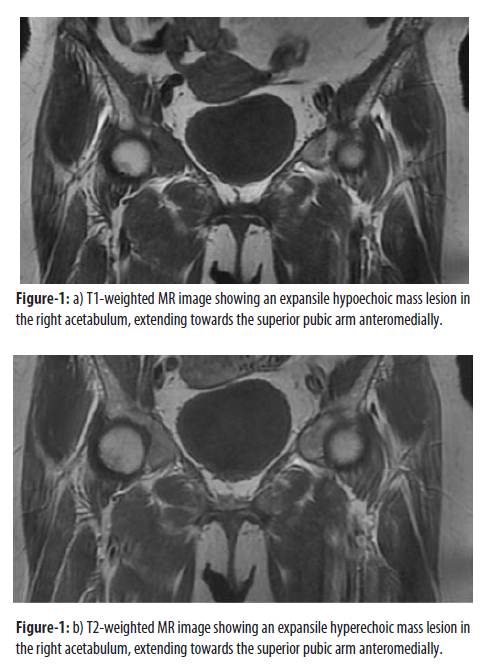 Soft tissue oedema and periosseous reaction were noteworthy in the paraosseous space. When evaluated keeping in mind the patient's age, further investigation was done with 3-phase bone scintigraphy due to the suspicious appearance.

Biopsies were taken from the mass with suspicion of pre-diagnosis for giant cell bone tumour, lymphoma and metastasis. Histopathological examination revealed pigmentous macrophages and lamellar bone trabeculae, rich in fat, including reactive bone tissue between the striated muscle and adipose tissue and fibrous tissue. Near the striated muscle tissues and bone trabeculae, multinuclear giant cell clumps of microscopic osteoclast type were observed. On examination, no suspicious or diagnostic findings were found in these samples in terms of malignancy. In biopsy result, findings compatible with giant cell bone lesion were detected.

Neck ultrasound and parathyroid scintigraphy (Tc 99m sestamibi) were performed to investigate the aetiology. On neck ultrasound, a solid mass of 34x19x19mm in the left thyroid inferoposterior lobe was seen as extending caudally, with hyperechoic and cystic components centrally, and hypoechoic components peripherally. The patient's condition was evaluated as left inferior parathyroid adenoma caused by PHPT because of the compatibility with positive sign on radioactive sestamibi scintigraphy showing parathyroid adenoma at the same localisation. She presented to the department of general surgery, Sisli Hamidiye Etfal Medical Practice and Research Centre, Istanbul on December 2019. With informed consent by the patient, minimally invasive parathyroidectomy was performed in the department of general surgery.  It was a bright, reddish brown, soft tumour, measuring 4x2x1cm in size and weighted 41 grams (Figure-2a, 2b). 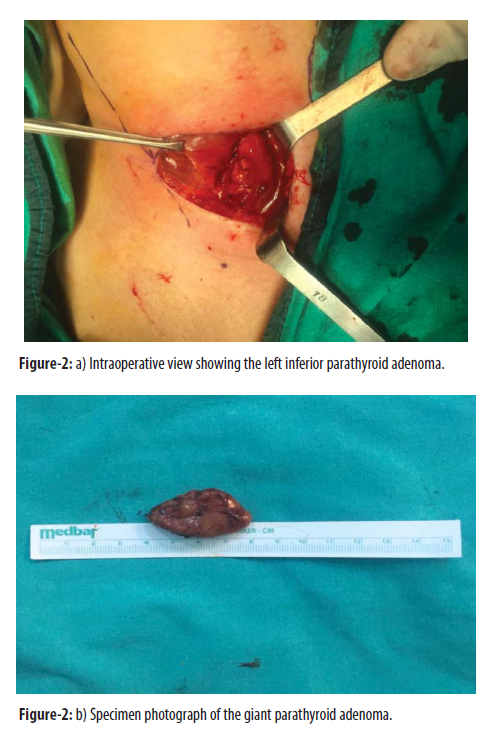 As a result of clinical, histological, radiological and biochemical examinations, the diagnosis of BT caused by PHPT resulting from parathyroid adenoma was confirmed.

Parathyroid glands are endocrine glands that regulate calcium and phosphorus metabolism by secreting PTH. Over secretion of PTH is called hyperparathyroidism (HPT) and is classified as primary, secondary and tertiary. PHPT results in a disruption in the regulation of calcium metabolism caused by excessive secretion of PTH and is the third most common endocrine disease. The clinical presentation of PHPT varies from asymptomatic disease to disorders seen with symptoms of renal, skeletal, gastrointestinal and neuromuscular systems.5,6 Secondary HPT (SHPT) results from increased production of PTH due to the stimulation of parathyroid glands by external factors such as hypocalcaemia and vitamin D insufficiency, and the parathyroid glands consist of 98% hyperplastic and 2% adenomatous changes.7 In patients with primary and secondary HPT, osteitis fibrosa cystica and BTs can be seen as a pathological expression due to prolonged or severe disease. BTs are formed as a result of PHPT with an incidence of 4.5% or more rarely in SHPT with 1.5-1.7% incidence.8 Today, with the increased use of biochemical tests, HPT is diagnosed early and treated before it becomes symptomatic. Thus the frequency of BT cases, which is seen in the advanced stages of HPT, decreases gradually.

BTs represent the terminal stages of the bone remodelling process caused by disruption of the balance between osteoblastic and osteoclastic activity resulting from PHPT or SHPT.9 Although these lesions are locally aggressive, they are essentially benign; however, they must always be differentiated from malignant tumours, metastases and lymphoma. Similarly, there are many case reports in the literature about patients with diagnostic confusion between brown tumours and malignant pathologies.4,10 Although it usually appears as a single lesion in the acetabular bone, as in our case, it may occur as single or multiple lesions in any bone, and often in maxillofacial bones, clavicles, rib bones, pelvis, femur and extremities.11,12

Parathyroidectomy was performed after hydration and diuretic treatment was given to the patient, after which the calcium level was normalised. Perioperative PTH decrease was seen. Calcium and PTH levels were normal after the parathyroidectomy. Histopathologically, parathyroid adenoma was confirmed. The patient did not have any complaints in the first month follow-up. Calcium, PTH and phosphorus levels (Ca: 9.3mg/dl, PTH: 88 ng/dl, P: 3.5 mg/dl) were normal and in control.

In HPT, osteopenia and subperiosteal bone resorption occur as a result of increased osteoclastic activity, while the reactive osteoblastic activity increases, and the fibrovascular tissue fills the bone marrow cavities. The accumulation of haemosiderin within osteoclastic cysts also gives the characteristic brown colour to the lesions, the reason due to which it was called 'Brown tumour' by Jaffe.13 Although the definition of the tumour is not correct, these lesions result from the cellular repair process and so osteoclastoma is also used in many sources instead of the term 'tumour'. Increased fibroblastic proliferation, osteoclast-like giant cells, restorative granulomas, cystic regions in fibrous tissue and haemorrhagic foci can be histologically seen in BTs. Thus, it is difficult to differentiate BT from malignant bone tumours, especially from the giant-cell variant.10 In our case, biopsy was performed which did not contribute to the differential diagnosis; therefore, the diagnosis had to be supported by clinical examination and biochemical tests.

BT is a rare bone lesion that develops secondary to HPT and is usually predicted in patients with prolonged PTH elevation. Imaging methods are important diagnostic tools. When suspicious lesions occur with imaging methods, the patients should not be directed to biopsy immediately; rather, differential diagnosis should be considered with the help of biochemical values and parathyroid adenomas should be investigated. To avoid unnecessary surgical treatment of symptomatic osteolytic lesions, appropriate preoperative evaluation should be done with a multidisciplinary approach including general surgery, radiology and pathology departments.

Informed Consent: Informed consent has been taken from the patient for the processing and publication of this case report.