Gastric antral vascular ectasia (GAVE) is a rare but important cause of upper gastrointestinal bleeding that may present with refractory anaemia or overt gastrointestinal bleeding requiring multiple admissions and resuscitation. Although endoscopic therapies are considered first line treatment for the management of refractory gastric antral vascular ectasia, angiographic embolisation of the culprit vessel(s) may emerge as an effective and safe treatment modality in the near future. Here, we present the case of a middle-aged gentleman with refractory gastric antral vascular ectasia, who was not responding to repeated sessions of Argon Plasma Coagulation (APC) and was successfully treated with trans-catheter arterial embolisation of gastro-duodenal artery.

Gastric antral vascular ectasia (GAVE), though a rare cause of upper gastrointestinal bleeding and accounting for about 4% of all non-variceal bleeding, may present as a life-threatening complication.1 Gastric antral vascular ectasia may present as stripes radially originating from pylorus and moving to the antrum (watermelon stomach) or as diffuse red spots in the antrum (honeycomb stomach).2 GAVE may rarely manifest itself in cardia of the stomach, duodenum, jejunum and rectum.3 Histologically, GAVE presents as vascular ectasia of mucosal capillaries, spindle cell proliferation, focal thrombosis and fibrohyalinosis.4 It is differentiated from portal hypertensive gastropathy (PHG) on the basis of location, endoscopic appearance, histology and treatment modalities.1

Here we discuss the case of a middle-aged gentleman with refractory GAVE secondary to chronic hepatitis C-related cirrhosis, not responding to repeated sessions of APC; he was successfully treated with transcatheter arterial embolisation of gastroduodenal artery.

A 53-year-old man with clinically significant portal hypertension secondary to treated Hepatitis C Virus presented to the emergency department of Pak Emirates Military Hospital, Rawalpindi in February 2018 with black tarry stools and bicytopenia. On examination, he was pale with no jaundice, hepatic encephalopathy or ascites. The patient was maintaining his vitals without support and showed no signs of dehydration or shock. Laboratory investigations showed haemoglobin at 6g/dl, Total Leucocyte Count at 5.5 x 109/uL, platelets at 65 x 109/uL, bilirubin 16umol/L, ALT 43 IU, Alkaline phosphatase 243 IU, albumin 31g/L, INR 1.3 and normal serum electrolytes. An urgent upper gastrointestinal endoscopy was planned to rule out variceal haemorrhage in view of the cirrhosis. Endoscopy showed grade I oesophageal varices without any endoscopic red signs (ERS), mild mosaic pattern, isolated red markings and a diffuse involvement of the antrum and pylorus with gastric antral vascular ectasia (GAVE) in a honeycomb like pattern (Figure-1). 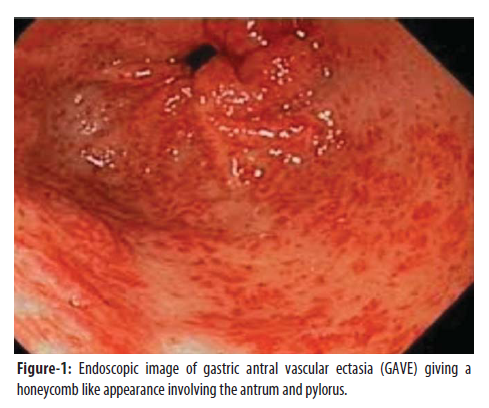 A session of Argon Plasma Coagulation was carried out and the patient was transfused a single unit of packed red cells. A repeated complete blood count showed no drop in haemoglobin and thus the patient was discharged with instructions to keep any eye on his stools or blood in vomitus.

The patient presented three more times with the same complaints and APC was performed each time. A full length colonoscopy and enteroscopy did not detect any other cause of blood loss and hence he was labelled as a case of refractory GAVE. On October 21, 2018, the patient was received in the ER in shock. After initial resuscitation with fluids and blood products, a unanimous decision was taken in the multidisciplinary team meeting to offer Transcatheter Arterial Embolisation after an extensive literature review. Angiography was performed and the gastro-duodenal artery was embolised with microcoils (Figure-2). 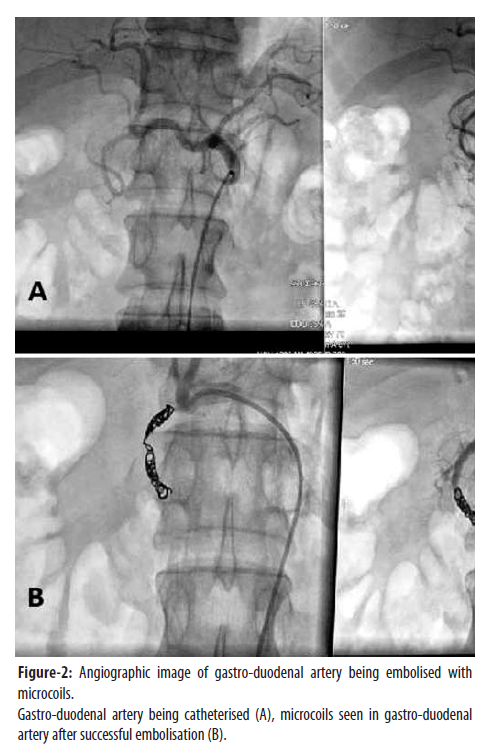 The patient had an uneventful recovery and a repeat endoscopy showed significant reduction of GAVE with no need for transfusions or APC over a period of one year post-procedure follow up.

The treatment modalities for GAVE include pharmacological agents and endoscopic therapy as first line agents with varied results. Argon Plasma Coagulation has been considered one of the most efficient treatment option for GAVE with more than 80% efficacy and an infrequent failure rate.6 Despite these promising results, APC has been found to be less effective for medium- and long-term bleeding control in GAVE which might be because of the production of new GAVE, highly fragile local blood vessels, mechanical irritation, mucosal blood flow stasis and thickening of the vascular walls affecting the depth of thermal injury.6

Transcatheter Arterial Embolisation (TAE) has been rarely mentioned for the treatment of GAVE in literature and its effectiveness has not been established as yet. A selective TAE may be used with high efficacy and safety in cases of refractory GAVE where the culprit vessels are identified and a radical treatment may be offered,6 as in our case.

Consent: the patient signed a written informed consent for using any data for research and educational purposes. Also ethical committee letter was duly signed for the case report from the concerned department.

Disclaimer: The case report has not been presented or published in any conference or any other journal.

Conflict of Interest: No potential conflict of interest relevant to this article was reported.

Funding Disclosure: None to disclose.