Hypertrophic olivary degeneration is a kind of trans-synaptic degeneration, caused by the interruption of dentato rubro olivary pathway. Magnetic resonance imaging (MRI) has been the best modality to show the signals of olivary nucleus hypertrophy. It appears on T2-weighted magnetic resonance imaging as hyper-intensities. Here we present a unique case of a 27-year-old male with traumatic brain injury causing multiple intracranial haemorrhages and functional impairment, which was revealed on computerised tomography. Tracheotomy and thoracic drainage were performed immediately. Anti-infection therapy, brain protection, and comprehensive arousal therapy were part of the intervention along with a comprehensive rehabilitation programme including occupational therapy, balance training, coordination, bed mobility training, and strengthening exercises. A holistic diagnostic approach can reduce the chances of misdiagnosing post-traumatic Hypertrophic Olivary Degeneration cases.

We concluded that a comprehensive physical rehabilitation programme and medical treatment works best to heal the lesion and its resulting traumatic symptoms in cases of  Hypertrophic Olivary Degeneration cases.

The treatment options for hypertrophic olivary degeneration (HOD) are limited, but there is some evidence that Gabapentin, Memantine, Botulinum toxin injections, and deep brain stimulation can be used.4

Publishing this unique case will help other health professionals to reduce chances of misdiagnosing cases of post traumatic HOD, and give them mental stimulation for considering other diagnoses, such as post-traumatic HOD instead of misdiagnosing it as epilepsy and hypertrophy.

A 27-year-old man presented to Tongji Hospital( Wuhan, Hubei Province, China) in August 2018, with a history of head trauma due to a traffic accident. Before managing the patient, the family's consent was taken for anonymous publication of this case report.

The patient had no history of hypertension, type 2 diabetes mellitus, hyperlipidaemia, obstructive or sleep apnoea and denied smoking, drinking (wine, alcohol), and using any recreational drugs.

Intracranial haemorrhage and tremors were the main findings and treatment concerns. The patient was directly admitted to our hospital after acquiring the trauma and no intervention was performed earlier, at any other hospital.

MRI of the head and diffusion-weighted imaging (DWI) showed the ventral vertebral body of the medulla oblongata and inferior olivary nucleus region shrinking, with a high signal on T2WI. The neuro-imaging findings and the clinical manifestations supported the diagnosis of HOD and traumatic successor, Wallerian degeneration. On T2 high-intensity non-contrast enhancing lesions, the presence of olivary nucleus enlargement, suggested hypertrophic olivary degeneration as the only diagnosis which explains all the imaging manifestations (Figure-1, 2). 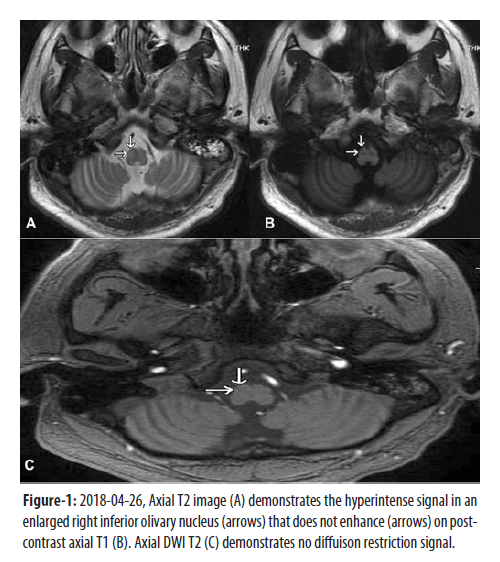 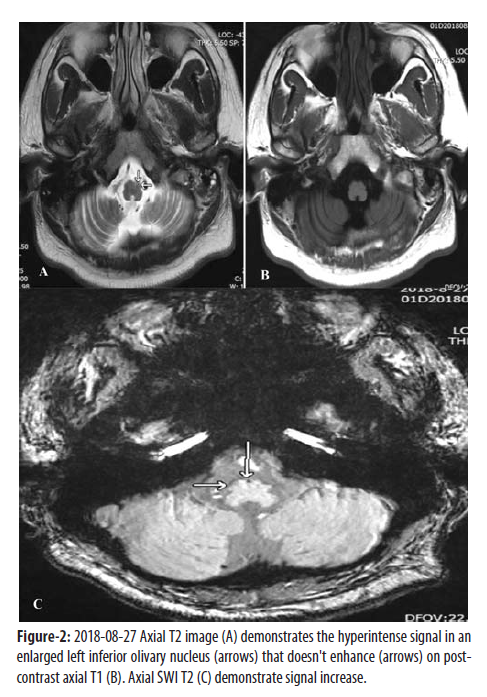 HOD always occurs with the damage of dentate nucleus-red nucleus pathway or the tegmental central tract pathway instead of the pathway from the inferior olivary nucleus to the contralateral cerebellum.6

According to the location, together with the extent of infarction in the caudal midbrain, the clinical manifestations may be different. The symptoms on initial presentation are mainly bilateral; the reason is that the caudal collateral branch of the midbrain has the descending cerebellar tract, the central tegmental tract, and other important white matter bundles passing through the midline, which makes it hard for inexperienced eyes to locate the lesions in one vascular area.6,7

The differential diagnosis of high signal intensity on T2 weighted imaging in pontine medullary area includes tumour, demyelinating disease, infarction, or inflammatory diseases (encephalitis, tuberculosis, sarcoidosis). However, the lack of contrast ensures the absence of tumours or the origin of infection, while the extra enlargement of the olivary nucleus is conducive to the chronic stage of infarction or multiple sclerosis. Therefore, in the background of T2 high-intensity non-contrast-enhanced lesions with olivary nucleus enlargement, hypertrophic olivary degeneration remains the only diagnosis to explain all imaging manifestations.8

HOD is currently lacking an ideal treatment for tremors. Most patients are alleviated by use drugs as Carbamazepine, Clonazepam, Diazepam, Levodopa, Benzene sea somatotherapy and others. The presented patient, in the past three months had mostly been lying or sitting and with no rehabilitation training leading to a declining physical strength. With no exercise for a long duration, his muscle strength and endurance of both the lower limbs had declined. To overcome these problems, drug treatment and systematic rehabilitation treatment was initiated. The principle "step by step" was followed to strengthen basic exercise training. Through the combination of drug treatment and intensive basic exercise training, tremors of the whole body were relieved.

Therefore, with the reduction of tremors, the left limb muscle strength increased from 3 to 4, and the right proximal limb increased from 1 to 3. His sitting balance improved up to 2 levels and standing balance was on level one 1. The patient's daily living ability also significantly improved, and the Barthel index score increased from 10 points before treatment to 45 points. The etiology was intra-parenchymal pontine haemorrhage secondary to trauma and not hypertonia or epilepsy, which was very frequently encountered in the rehabilitation department. Thus, it is important to explore and recognise the HOD symptoms, particularly in young patients, to avoid misdiagnosis of this benign condition.9

This case shows neurological deterioration occurs after cerebellum and brainstem haemorrhage secondary to head trauma with interval development of HOD during recovery. Comprehensive rehabilitation along with medical treatment works best to improve tremors, spasticity, strength, and functional movements in patients with HOD.

Disclaimer: This case report has not been submitted to any other journal.

Conflict of Interest: The authors certify that there is no conflict of interest with any financial organisation regarding the material discussed in the manuscript.

Funding Disclosure: No direct or indirect funding has been received for this research.

3. Sanverdi SE, Oguz KK, Haliloglu G. Hypertrophic olivary degeneration in children: four new cases and a review of the literature with an emphasis on the MRI findings. Br J Radiol. 2012; 85:511-6.