Diagnosis of tuberculosis is often difficult when extrapulmonary sites are involved. In particular, tuberculous (TB) arthritis is rare among extrapulmonary tuberculosis cases, and direct acid-fast bacilli (AFB) staining of joint fluid is often negative, with an estimated sensitivity of only 20%.1 Cultures for Mycobacterium tuberculosis take up to eight weeks before becoming positive. Consequently, extensive joint destruction may develop due to delayed diagnosis. Therefore, a simple and quick biomarker for diagnosing TB arthritis is needed. Body fluid adenosine deaminase (ADA) has good sensitivity and specificity for diagnosing TB pleurisy, TB peritonitis, and TB meningitis.2-4 However, studies on the diagnostic ability of synovial fluid ADA (SF-ADA) to detect TB arthritis are limited. This report evaluates the diagnostic usefulness of SF-ADA in tuberculosis compared with non-TB joint fluid.

We performed a retrospective observational study from January 2011 to July 2015. Since South Korea has an intermediate incidence of tuberculosis (66/100,000 population in 2018)5, ADA measurement is commonly included in routine body fluid analyses. We enrolled patients who had synovial fluid ADA test results, based on a review of their medical records. ADA activity was determined with an ADA-N kit (Denka Seiken Co. Ltd, Japan) and an automated analyser, Toshiba 200FR (Toshiba Co. Ltd, Japan). The institutional board of the Chungnam National University Hospital approved this study, and the requirement for informed consent was waived.

Because the data were not normally distributed by a Shapiro-Wilk test, ADAs were compared using nonparametric Kruskal-Wallis and Mann-Whitney tests with Bonferroni correction. The results are presented as median with range. A p-value < 0.05 was considered significant. All analyses were performed using SPSS version 22.0 for Windows and MedCalc version 15.0.

The characteristics of the nine patients with TB arthritis are described in Table-2.

Two of the nine patients with TB arthritis had pulmonary tuberculosis and one had tuberculous spondylitis simultaneously. One patient died before the start of anti-tuberculous treatment because of underlying cardiovascular problems. Eight of nine patients had AFB cultures with growth after three to eight weeks, and three were negative, based on PCR, for tuberculosis (Table-2). 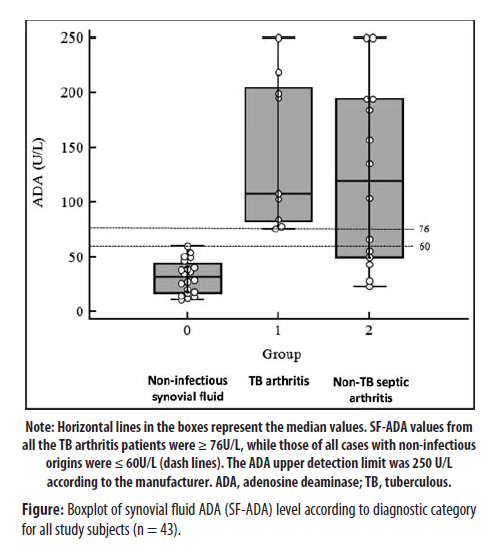 We demonstrated that joint fluid ADA level can be useful for diagnosing TB arthritis and identified a cut-off value of > 60-76 U/L. Foocharoen et al. reported that the mean synovial fluid ADA levels in patients with TB arthritis was 35.7±10.4 (range, 20-51) U/L. They concluded that the sensitivity and specificity for diagnosing TB arthritis were 83.3% and 96.7% respectively, when a cut-off value of 31 U/L was used.6 However, none of our patients with TB arthritis had synovial ADA values <76 (range, 76-250) U/L. Fujimoto et al. described an adult patient with TB arthritis in the knee joint and indicated that the synovial fluid ADA concentration was 191 U/L.7 In addition, Sousa et al. showed that the cut-off value of synovial fluid ADA in non-TB prosthetic joint infection was >61 U/L.8 In contrast, the joint fluid ADA in non-TB septic arthritis was no more than 28 (17-28) U/L in the Foocharoen et al. study. In our report, the median joint fluid ADA concentration in non-TB septic arthritis was 119.8 (range 23-250) U/L. Therefore, previous reports may support the results of our study rather than those of Foocharoen et al. study. However, a concrete conclusion cannot be confirmed because the sample size was very small (n=7 in the Foocharoen et al. report vs. 9 in this study) and both studies were retrospective in design with the inherent limitations. In addition, our report may have a selection bias because not all non-TB synovial samples had joint fluid ADA results during the study period. Nonetheless, the difference between our study and the report by Foocharoen et al. was profound. Therefore, additional prospective studies from various centers are required.

Three patients with TB arthritis showed negative PCR test results for tuberculosis. These patients were diagnosed by AFB cultures, which took three to eight weeks to be reported. While waiting for these AFB culture results, empirical antibacterial therapy was given to the patients, although joint destruction progressed. According to our study results, patients with negative TB-PCR and ordinary bacterial culture results along with high SF-ADA (>76 U/L) can be treated with anti-tuberculosis medication to prevent devastating joint damage. Therapy can be modified as needed when the AFB culture results are reported.

In conclusion, patients with persistent culture-negative mono- or oligo-arthritis should be considered as possible cases with joint TB. The possible presence of tuberculosis and a cut-off value of SF-ADA 60-76 U/L may be helpful to differentiate TB arthritis from non-infectious causes. Finally, SF-ADA alone should not be used for distinguishing TB arthritis from non-TB pyogenic arthritis.