Objective: To determine the prevalence rate of diabetes mellitus among active tuberculosis patients, and to assess the impact of age in this regard.

A statistical analysis to combine data of multiple scientific studies is called meta-analysis.1 Data in such a scenario is extracted from published or unpublished multiple studies in order to explore general trends or to evaluate overall effect.2,3 It provides a consistent method for inspecting the existing study's literature on any specific field and the results from such analysis can provide proof for or against expert opinion or popular belief. While conducting meta-analysis, the methods and interpretations need to be revisited to re-evaluate the results of previous research to derive conclusions on the topic concerned. Systematic review methodology is at the heart of meta-analysis.4-7

According to a report of World Health Organisation (WHO), 10.4 million new tuberculosis (TB) cases and 1.7 million deaths were registered in 2017.8 Moreover, 415 million cases and 5 million deaths due to diabetes mellitus (DM) were also registered.9 Unfortunately, 95% people living in middle-rated countries, like those in Africa and southeast Asia, were affected by TB and DM cases were 75%.10

TB disease is caused by a bacteria called mycobacterium tuberculosis which affects all parts of the body and spreads by air when a person with TB coughs, sneezes or talks. People are infected by TB complex by one of three routes: inhalation, ingestion and inoculation.11 TB bacteria mostly increases in the lungs, and identification of TB can be done by bad cough that lasts 3 weeks or longer, pain in the chest and coughing up blood or saliva with mucus deep inside the lungs.12

TB bacteria affects all ages and is active in people who are smokers, or working close to chemicals, or in areas with more dust and perfume particles.13 The most common investigative test for TB, purified protein derivative (PPD) tuberculin, is the originator of TB bacteria. Tactlessly, the skin test is not 100% good and has been known to give false positive (FP) and false negative (FN) readings.14

DM is a recorded disorder due to high or low blood sugar levels for a long period. If the identification of diabetes is not done in time, it can create more complexity for the human body because it can badly attack other parts of the body. Insulin and some oral medication can lower blood sugar level.15,16

A systematic review about the prevalence of TB among diabetic patients included 15 studies for meta-analysis in order to find the pooled overall prevalence rate of TB in DM cases.17

A systematic review conducted on the management of TB healthcare practitioners in Pakistan observed that patients' compliance was low <50% for the use of sputum microscopy in the diagnosis of TB in Pakistan, and 50% practitioners correctly identified cough as the main TB symptom.18

The current meta-analysis was planned to determine the prevalence rate of DM among active TB patients, and to assess the impact of age in this regard.

Inclusion criteria was to include studies that had ethnical approval, related to TB and DM and were carried out among diverse age groups under different conditions in African and Asian countries. The included studies could be be either cross-sectional or case studies and involved primary outcomes of interest.

Studies excluded were those that only reported incidence, anti-drug resistance mainly focussing on TB without reporting prevalence rate of DM among TB patients.

Data extracted included country, area and the year of publication. The number of DM and TB cases were also recorded to estimate an overall CI for the prevalence rate.

The data was analysed using a systematic review of the selected studies. Meta-analysis was conducted for the collected data to assess pooled prevalence of DM in TB patients using random effect model through Meta-Excel software. Subgroup analysis was carried out using Asia and Africa as the regions.25-39 The role of age was analysed using meta-regression.

After screening 1110 research papers, 200(%) were fully reviewed. After applying the inclusion/exclusion criteria, 15(7.5%) of them were included which comprised 28,055 participants (Figure-1). 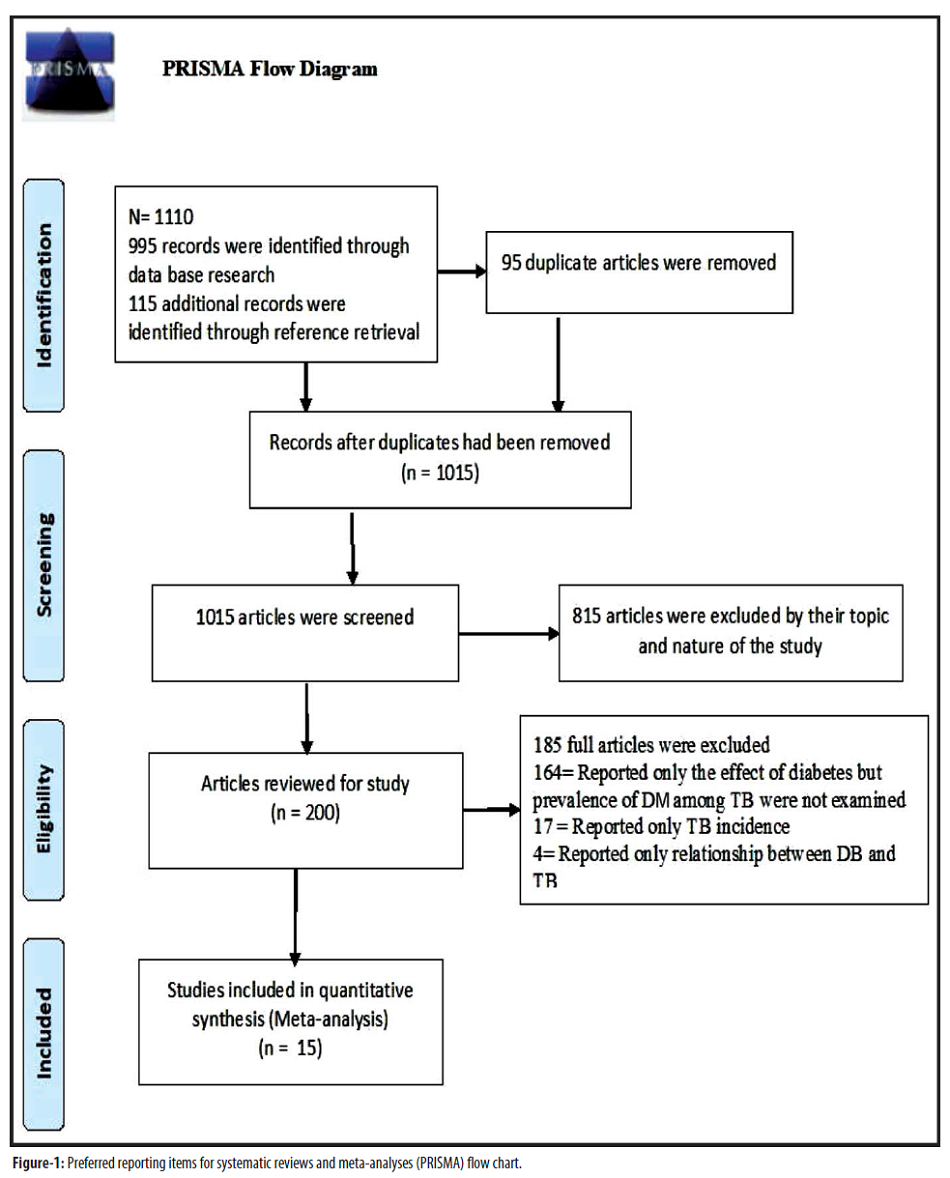 Forest plot suggested that within 95% CI the combined effect size for all the included studies were significant except one (Figure-2). 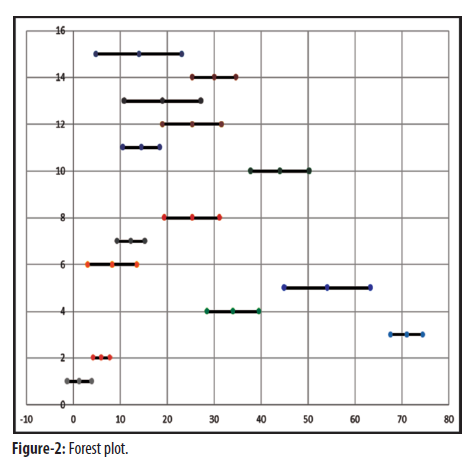 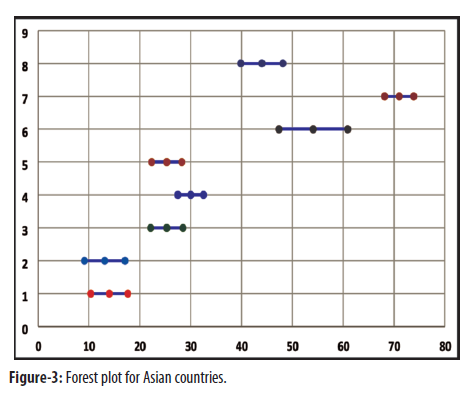 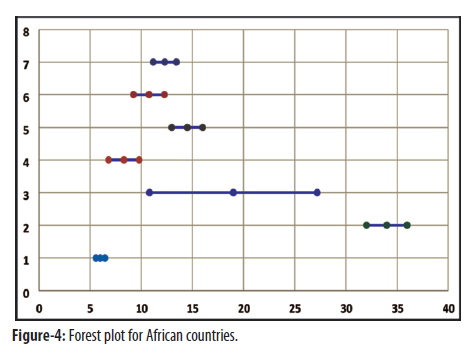 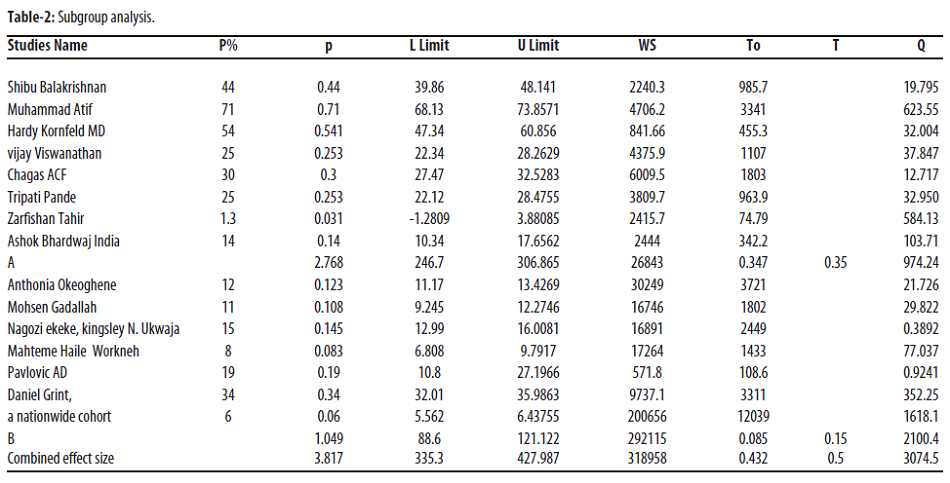 Data for moderate analysis included standard error (SE) and weights for prevalence rate, and used age as the moderator variable which was extracted from all the included studies (Table-3). 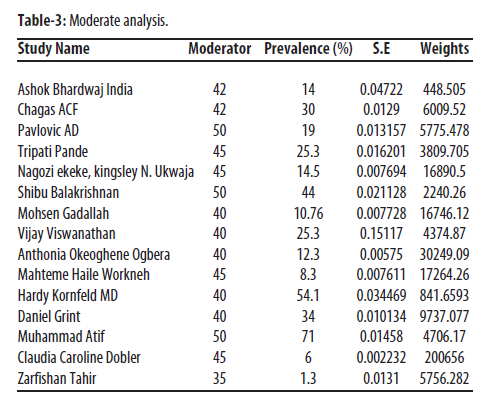 There existed a significant negative relationship between the prevalence rate and age (Figure-5). 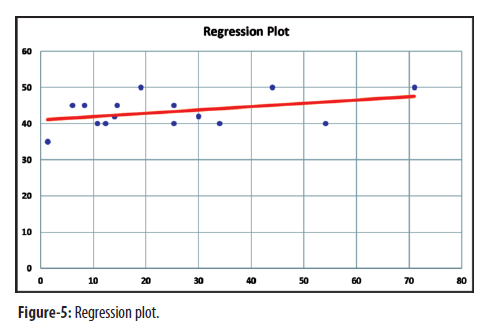 Evidence based on the 15 included studies with 28,055 participants revealed 14% prevalence of DM among TB patients in countries where the studies were conducted. This rate also justifies other studies.40 Forest plot indicated that there was no non-significant studies in data except one,39 and that was significant in subgroup analyses

There was almost no heterogeneity in the included studies. To examine heterogeneity and significance of the results within groups, subgroup analysis was also conducted because it is more reliable to draw conclusions on the basis of subgroups. Meta-regression analysis revealed that age was playing a significant role in the analysis. Likewise, prevalence of DM among TB patients could also be affected by the age factor which is in line with past studies.41

DM was found to be widely spreading among Asian and African people, and age was found to be a significant negative factor. The findings are expected to be helpful in examining the rate of DM among TB patients.

The prognostic relevance of 14-3-3ξ expression in cancers: A meta-analysis