Method: The cross-sectional study was conducted at the Center for Advanced Studies in Vaccinology and Biotechnology, University of Balochistan, Quetta, Pakistan, from January 5 to December 6, 2019, and comprised faecal / rectal swab samples from patients with a history of untreated severe diarrhoea of <12-hour duration. The samples were collected from suspected cholera patients at different hospitals of the province. The isolates were examined and identified on the basis of colony characters on thiosulfate-citrate-bile salts-sucrose agar. Susppected colonies were subjected to gram staining, biochemical tests and polymerase chain reaction-based identification. Data was analysed using SPSS 19.

Conclusion: Surveillance for diarrhoeal disorders is necessary to control future outbreaks of cholera in the region.

Vibrio cholerae comprises gram-negative, facultative, short-rods and filamentous bacillus of genus vibrio.1 The vibrio belongs to phylum proteobacteria, class gammaproteobacteria, order vibrionales, and is a member of the vibrionaceae family.2 The species V. cholerae is classified on the basis of its O antigens. There are more than 200 serotypes of V. cholera.3 V. cholerae is a known aetiological agent of cholera, which causes severe outbreaks of diarrhoea.4 V. cholerae is mainly transmitted through the oro-faecal route or after ingestion of contaminated water or food. V. cholerae is transmitted to humans, invades and colonises the small intestine, producing toxins and resulting in massive secretory diarrhoea.5 There are natural barriers against infectious agents that secrete strongest mucosal immunoglobulin A (IgA) that help in limiting the infection.6

Diagnosis of V. cholerae is based on biochemical characterization of bacteria strain isolated from human stool. V. cholerae can also be isolated from vomiting, water source and contaminated food. Around the world, 3-5 million annual cases of cholera have been reported, with about 100,000-120,000 deaths.7

Cholera in Bangladesh, India and various parts of the developing world occur as endemic.8 It is one of the most important endemic diseases in Pakistan. In August 2010, massive cholera cases were reported in Pakistan9 and all the cases were found in the flood-affected provinces of Khyber Pakhtunkhwa (KP), Punjab and Sindh.

Balochistan province lacks sewage system and experiences dry weather, drought and water shortage. People and animal drink water from the same pool that has contaminated water. Cholera is found rather consistently in the province that also has serious lack of healthcare infrastructure. The current study was planned to assess the different epidemiological and polymerase chain reaction (PCR)-based identification of V. cholera in Balochistan.

The cross-sectional study was conducted at the Center for Advanced Studies in Vaccinology and Biotechnology (CASVAB), University of Balochistan, Quetta, Pakistan, from January 5 to December 6, 2019. After approval from the institutional ethics review committee, the sample size was calculated with 5% significance level, 95% confidence level and 80% power of test. Faecal samples or rectal swabs were taken from patients regardless of age or gender with a history of untreated severe (rice water) diarrhoea of less than 12-hour duration and with evidence of significant dehydration. Patients who had taken antibiotics were excluded. The samples were immediately transported to CASVAB and were processed for microbiological analysis. The working area was regularly disinfected with 70% ethanol, and gloves, microscope slides, masks and all the cultures were autoclaved before disposal. For isolation of V. cholerae from stool samples or rectal swabs were incubated in alkaline peptone water (APW)-enriched medium. After 6-8 hrs of incubation, a loop from the enrichment medium was streaked on thiosulfate citrate bile salts (TCBS) agar plates and the smaples were incubated at 370C for 24 hrs.10

The isolates were examined and identified on the basis of colony characters observed with the naked eye on TCBS agar. Suspected colonies were subjected to gram staining and various biochemical reaction tests.11

Entire genomic deoxyribonucleic acid (DNA) was extracted from samples using Genomic DNA purification kit (Promega, USA), and it was then stored at -20°C for additional use. PCR was used for colonies identified as V. cholerae. Primers used were F1 (CACCAAGAAGGTGACTTTATTGTG) R1 (GAACTTATAACCACCCGCG). The reaction mixture was subjected to an amplification of 30 cycles, each of which consisted of three steps: denaturation of template DNA at 94°C for 30s, annealing of the template DNA at 64°C for 30s, and extension of the primers at 72°C for 30s. Before the initiation of the first cycle, the reaction mixture was heated at 94°C for 5 min to allow complete denaturation of the template.12

Blood samples for serum electrolyte were drawn using standard venepuncture technique and collected in a sterile plain tube at the time of collecting faecal samples and rectal swabs. The blood samples were centrifuged for 5 min at 10,000 rpm. The supernatant serum was collected from the blood samples and were further processed for electrolytes, such as sodium, potassium, and chloride, using Easylight plus ion selective electrode automated analyser.

The isolates were checked for antibiotic sensitivity using an agar disk diffusion method on Mueller-Hinton agar. The antibiogram was done according the criteria set by the Clinical and Laboratory Standards Institute (CLSI), formerly known as the National Committee for Clinical Laboratory Standard, to determine susceptibility patterns to commonly used antibiotics.13 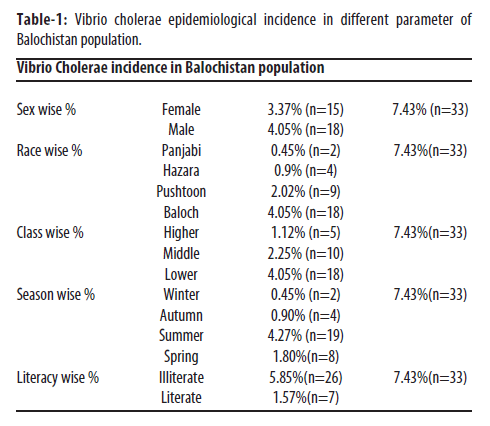 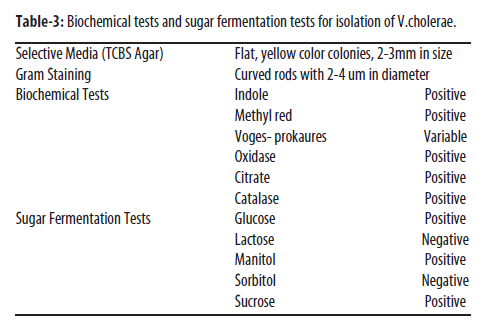 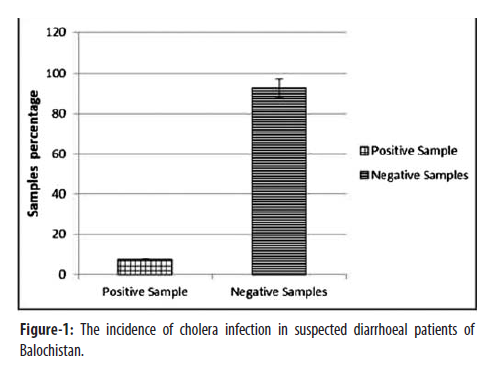 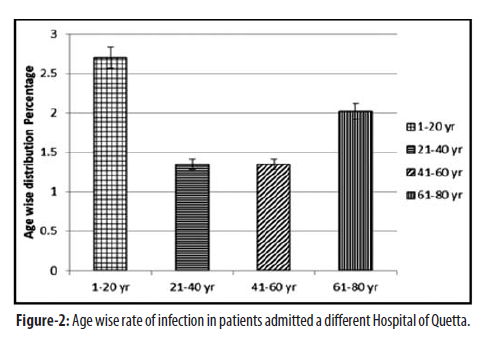 All the isolates produced the predicted size of 588 base pair amplicons of ompW gene (Figure-3). 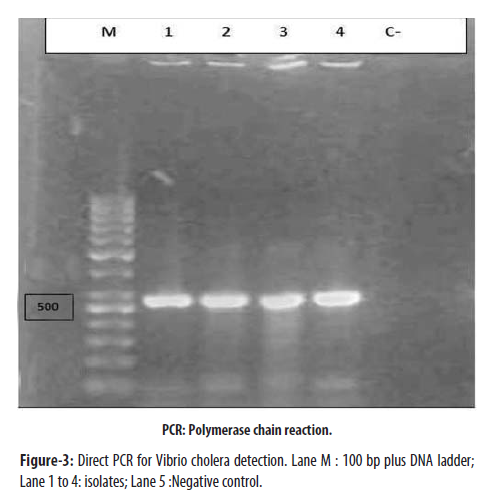 At the time of admission, children <5 years were comatose and drowsy, while adults were fully conscious but with missing radial pulse and low systolic blood pressure (SBP). Sodium, potassium and chloride levels were low in all 33(100%) cholera patients.

The age-related findings of the current study were similar to those reported earlier,14 and the same was the case with gender-related findings.15 Likewise, findings related to the socioeconomic status and literacy were in line with literature.16,17 The seasonal variation noted in the current study is also supported by literature.15 The confirmation of V. cholerae through gram staining, biochemical tests and different sugar fermentation tests was also in agreement with literature.18 The study demonstrated that PCR method was a highly effective diagnostic approach for rapid and trustworthy diagnosis of cholera infection. The finding matched earlier studies.12 The antibiotic sensitivity and resistance results also matched the findings of earlier studies.19,20

There were more males affected by cholera than females and the frequency was the highest in those aged 1-20 years. The most relevant antibiotics were tetracycline, vancomycine, amikacin, gentamycin, levofloxacine, imipenum, erythromycin, ciprofloxacin and amoxicillin.