Diabetes mellitus (DM) is a complex metabolic disease characterised by raised plasma glucose levels. According to the International Diabetes Federation, worldwide prevalence of diabetes will rise from 463 million in 2019 to 578 million by 2030 and may reach up to 700 million by 2045.1 Pakistan has the 7th  biggest population of diabetics in the world, with the prevalence of type 2 DM (T2DM) of 11.77%.2 Long-term hyperglycaemia may lead to macrovascular and microvascular complications. Diabetic retinopathy (DR) is the most common microvascular complication and is a leading cause of vision-loss globally in adults aged 20-74 years. A meta-analysis showed that the worldwide prevalence of DR was 27% between 2015 and 2019.3 According to Mumtaz et al., the pooled DR prevalence in Pakistan was 8.6% whereas vision-threatening DR (VTDR)  was  28.2% from 1990 to 2017.4

Diabetes mellitus duration, poor glycaemic control, and hypertension (HTN) are the major risk factors for developing DR, but clinical studies in diabetics revealed a considerable variation in onset and severity of retinopathy, which are not fully explained by the known risk factors.5 Genetic factors affecting several biochemical mechanisms play a vital role in the vulnerability to develop retinopathy5 but the exact genetic mechanism is still not well-established. A variety of candidate genes, like receptor for advanced glycation end products (RAGE), vascular endothelial growth factor (VEGF), aldose reductase, nitric oxide synthase (NOS), and methylenetetrahydrofolate reductase (MTHFR), have been considered for association with DR, but have shown inconsistent reports in different populations. Amongst genes associated with DR, the RAGE encoding gene is important as it is positioned in the major histocompatibility complex (MHC) region on chromosome6. This is gene-dense region and holds several inflammatory genes possibly involved in diabetic complications. In chronic hyperglycaemia, advanced glycation end products (AGEs) are formed due to non-enzymatic glycation of proteins, lipids or nucleic acids6 which cause damage by binding to RAGE. AGEs-RAGEs activated inflammatory pathways lead to the generation of matrix metalloproteinases (MMPs) which form soluble RAGE (sRAGE) by cleaving C-truncated RAGE which is a cellular form of RAGE. Soluble RAGE has cytoprotective effect against AGE-RAGE interaction by acting as a decoy for RAGE ligands.7

RAGE gene polymorphisms have been studied in DR patients in various populations, including Caucasian, Chinese and Indian8-10 but not in Pakistani population. Limited literature is available on the genetic elements contributing to DM and DR in Pakistani patients.11-13 It is, therefore, important to investigate genetic factors involved in pathogenesis of DR to provide adequate therapy through pharmacological or surgical treatment.

After approval from the RIU ethics review committee, the sample size was calculated using Cochran's formula:14

where n was the required sample size, Z was the value of Z at 95% confidence interval (CI) which was 1.96, p was the prevalence of disease, q was the 1-p, and e was the accepted margin of error which was 0.05.

The sample was raised using non-probability convenience sampling technique. Those included were patients having T2DM for duration of >5 years, aged >30 years, taking medical treatment for DM either oral hypoglycaemics or insulin, and belonging to Punjabi, Kashmiri and Pathan ethnicities, which are the three main ethnic groups in Pakistan. A group of non-diabetic subjects matched for age and gender were also enrolled as the healthy control (HC) group.

Those excluded were patients with T1DM, malignancy, haematological disorder, acute and chronic cardiovascular, renal or hepatic disease, history of any other chronic endocrine or inflammatory disorder, history of any acute ophthalmic infection like uveitis, thrombotic event, or other ocular disorders like glaucoma.

After taking written informed consent from all the subjects, demographic and clinical data was recorded. All diabetic patients underwent a complete ophthalmological examination by certified ophthalmologists for diagnosis of retinopathy by grading colour fundus photography. 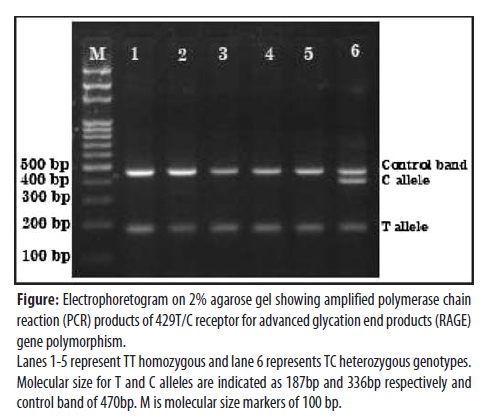 Ten percent of samples were re-assayed by using primer sequences from another company.

Data was analysed using SPSS 22. Chi-square / Fisher's exact test and odds ratio (OR) were used to compare allelic and genotype frequencies and to see association of genotypes with DM, DR and ethnicity. To evaluate the differences in biochemical variables among the groups, analysis of variance (ANOVA) with post-hoc Tukey's test was used. Pearson correlation, univariate and multiple logistic regression analysis were done to find relations between variables and for risk estimation among the study groups.

Serum sRAGE, FPG, TC, TG, LDL-C, urea and creatinine were raised in patient groups compared to HC, and a significant increase in TC and LDL-C was found in DR compared to DWR (p<0.05). DR subjects were sub-divided into non-proliferative (NPDR) and proliferative (PDR) groups, and serum sRAGE was significantly higher in PDR compared to NPDR and DWR (p<0.001) respectively. A positive correlation was found between serum sRAGE and FPG in DR group (p=0.004) (Table-1). 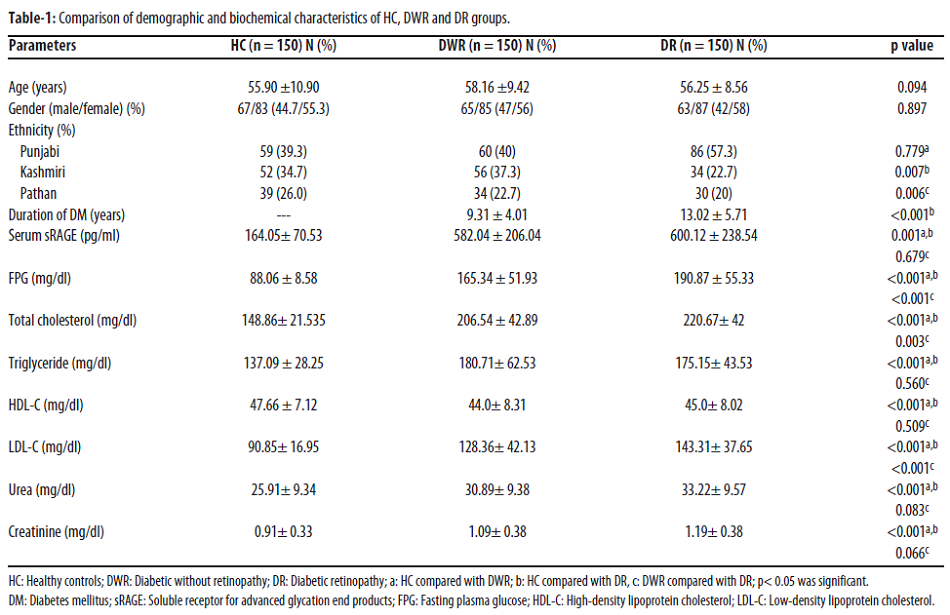 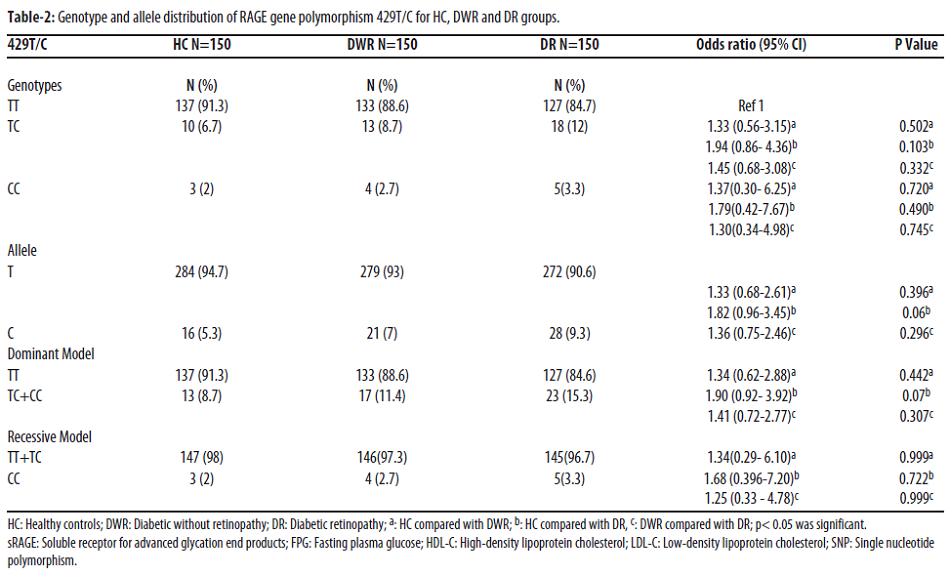 Association of genotypic and allelic frequencies of SNP 429T/C remained statistically non-significant when DR subjects were divided into NPDR and PDR groups and compared with DWR group. Upon further stratification of NPDR group into mild, moderate and severe, a moderate association of heterozygous TC genotype with severe NPDR was observed in comparison to DM group in both univariate and multinomial regression analysis (OR: 4.09; 95% CI: 1.35-12.35; p=0.01). No significant association was found in terms of ethnicity (p>0.05). 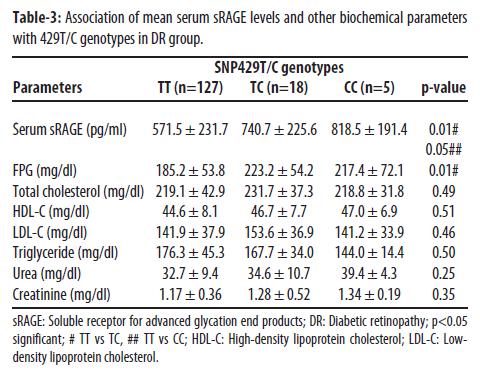 After multiple regression analysis, the association of these genotypes with raised sRAGE and FPG remained significant (p<0.05).

The study found no significant association of 429T/C genotypic and allelic frequencies with DR. However, a moderate association with severe NPDR was seen in comparison to DWR.

Several studies have been done to explore the association of genetic polymorphism 429T/C with DM and DR in diverse populations, but the results have remained conflicting. Hudson et al. found a significant association of C allele with DR and an increased protein expression of RAGE gene in vitro.8 Erna et al. found homozygous TT genotype of 429T/C to be protective, while mutant C allele was associated with retinopathy in Indonesian population.16

In contrast, various studies carried out in Asians and Caucasian populations found no association of DR with -429T/C polymorphism.10,17,18

Several meta-analyses performed in Chinese, Asian and Caucasian populations to evaluate the associations of RAGE gene polymorphisms with DM and DR showed no significant association for 429T/C variant.19,20 The reason for inconsistent results of -429T/C RAGE gene polymorphism in different populations may reflect the presence of variances in the pathogenesis of DR among populations. Gene variations in the same region may be involved in pathogenesis of DR as SNP 429T/C is positioned upstream to 374T/A (rs1800624) in the RAGE gene promoter region.

Although the current study found a moderate association of heterozygous TC genotype of 429T/C polymorphism, with severe NPDR at univariate and multivariate level, this association was not evident when mild, moderate and severe sub-groups of NPDR were studied together, and this needs to be interpreted very carefully.

The current study found significantly raised serum sRAGE levels in PDR patients compared to NPDR and DWR. A significant association of heterozygous TC and mutant CC genotypes with raised serum sRAGE and heterozygous TC with FPG was also seen at univariate and multivariate levels in DR group. These findings suggest that raised serum sRAGE and 429T/C polymorphism may be associated with pathogenesis of DR in Pakistani population. Circulating sRAGE protein and RAGE gene SNP may be a useful biomarker to predict vascular disease. In diabetic vascular complication, down-regulation of RAGE expression might be a favourable target for therapeutic intervention.

Consistent with our findings, Kerkeni et al. found significantly raised serum sRAGE, AGEs and pentosidine levels in PDR compared to NPDR in Tunisian patients.21 Hamid et al.  found significantly elevated plasma sRAGE levels with decreased total antioxidant status in PDR subjects compared to DWR in Egyptian population.22 Increased vitreous sRAGE was also found in PDR patients, indicating a role of RAGE-axis in the pathogenesis of proliferative retinal diseases.23 The current study found a positive correlation between serum sRAGE and FPG in DR group. Generally, it is considered that AGEs and sRAGE both become elevated in hyperglycaemia, but the increase in AGEs is more, leading to high AGE/sRAGE ratio.24 Up-regulation of serum sRAGE in chronic hyperglycaemia acts as a counter-system against endothelial cell damage and vasotoxic influence of AGE-RAGE axis.25

In contrast to these findings, several studies show that sRAGE levels are decreased in T2DM and DR patients26,27 possibly due to increased binding with circulating AGEs and consumption of all endogenous mechanisms that release sRAGE.

Further studies on a larger scale are needed to assess whether this RAGE gene polymorphism is related to DR and to clarify the relationship between DR and serum sRAGE levels in Pakistani population.

There was a moderate association of SNP rs1800625 with severe NPDR. The TC and CC genotypes of SNP rs1800625 were strongly associated with higher sRAGE levels in DR patients. Also, sRAGE was found to be a potential substitute marker of RAGE expression and the severity of target organ damage.

17.    PetrovicÏ MG, Steblovnik K, Peterlin B, Petrovic D. The - 429 T / C and - 374 T / A gene polymorphisms of the receptor of advanced glycation end products gene are not risk factors for diabetic retinopathy in Caucasians with Type 2 Diabetes. Klin Monatsbl Augenheilkd. 2003; 220:873-6.