Results: Of 172 patients, 143(83%) were males; 99(58%) hailed from the Punjab province; and 118(71%) had hepatitis C as the most common aetiology. The overall mean age was 46.1±10.5 years (range: 14-70 years). The mean Six-Minute Walk Distance was 291.9±67.2m. Model for end-stage liver disease score had a significant inverse correlation with Six-Minute Walk Distance (p<0.01) and a significant positive correlation with Modified Borg Dyspnoea Scale (p=0.02) and Eastern Cooperative Oncology Group Performance Status scores (p<0.01). Age and ethnicity had no correlation with the variables (p>0.05).

Several clinical tools can be used to assess physical ability. These include the Six-Minute Walk Distance (6MWD), the Eastern Cooperative Oncology Group (ECOG) scale of Performance Status, and the Modified Borg Dyspnoea Scale (MBDS). The 6MWD is a simple hands-on test that evaluates how the body responds to physical activity, and has been used to assess functional status in patients with peripheral vascular disease, heart failure, fibromyalgia, and other conditions.3 It also has been utilised to predict mortality in patients with heart failure, pulmonary arterial hypertension, chronic obstructive airway disease, and to assess liver and lung transplant candidates.2,3

The ECOG Performance Status is another tool to measure patients' ability to perform daily life activities.4 ECOG developed this tool for use in clinical trials of cancer treatments, but it seems suitable to assess functional status in other patients as well. The ECOG Performance Status measures patients' ability to care for themselves in terms of their daily activities and physical abilities like walking and working.

The assessment of perceived exertion is another method that can be used to determine the maximum tolerated exercise or the maximum safe functional capacity of an individual. The MBDS is one such rating scale, and it is used routinely in cardiopulmonary rehabilitation programmes.5

This prospective study was conducted at the Rehabilitation Medicine Department, Shifa International Hospital Islamabad, Pakistan, from August 2017 to November 2019. After approval from the institutional ethics review board, the sample size was calculated using an online calculator9 with known anticipated mean of 369±122 m,2 power of the test as 95%, a = 0.05, and anticipated mean of the study group as 291.9 m. The sample was raised using consecutive sampling technique from patients of either gender aged >12 years with a medical diagnosis of ESLD who had been selected for LT. Patients with haemodynamic instability, hepatocellular carcinoma, advanced osteoarthritis of the knee or hip joints, and neuromuscular disorders were excluded.

The 6MWD was estimated according to the published guidelines.10 The test was conducted by trained physiotherapists. The patients did not undergo any training to perform the 6MWD test; thus, the first test attempt was the most reliable measure of functional capacity and only the first attempt was used for analysis. The patients were asked to walk as fast as possible in a straight line on a flat surface along the walls of a large hall for six minutes. Development of pain, dyspnoea or palpitations were recorded as drop-out points. The 6MWD was recorded in metres. After the test, the patients were instructed to rate their sensations of dyspnoea and lower-limb fatigue using MBDS from 0 to 10.5 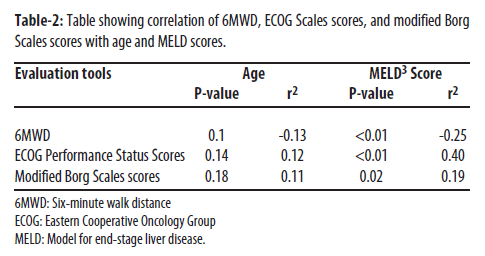 Mean 6MWD score was significantly higher in male patients, while the variation for ethnicity and primary ESLD aetiology was not significant (p>0.05). The mean MBDS and ECOG Performance Status did not show significant variance (Table-3).

The mean age of the sample in the current study was significantly lower than in studies done in Karachi and Peshawar.11-13 These studies were done 8-9 years ago, which means that compared to the previous decade, ESLD patients in Pakistan are now selected for LT at significantly younger ages than in the past, when they were hospitalized only after developing complications. This finding indicates progress in healthcare facilities in Pakistan as well as improvement in awareness among patients.

The study participants were predominantly male, which is consistent with other studies from Pakistan exploring ESLD in the local population.11-13 Pakistani Males may be affected more often than Pakistani females because of cultural and social values. The major cause of ESLD is hepatitis B or C virus infection, for which the primary modes of transmission are contaminated blades used by barbers and sharing of syringes by intravenous drug abusers. In both situations, males are mainly involved. Because the Pakistani government bans alcohol use, alcohol-induced ESLD is not frequent in Pakistan, nonetheless, alcohol-induced hepatitis is also more common in men because it is consumed mostly in settings like bachelor parties.

The predicted 3-month mortality risk of the sample in the current study was 2% on the basis of available literature.18 Regrettably, the sampled patients could not be followed up for outcome. The mean MELD score of the sample was significantly higher than what was reported by two studies in Pakistan19,20 and an American study.2 However, it was significantly lower compared to another Pakistani study.11

A significant inverse correlation of MELD score with 6MWD score was observed, similar to an American study,2 and a positive correlation was observed for ECOG Performance Status and MBDS scores. These correlations support the assumption that higher MELD scores and thus severe ESLD are associated with poor physical and functional performance. Another study21 also found low functional capacity and survival rates among patients with severe ESLD before LT. This poor performance was attributed to multiple extra-hepatic complications including de-conditioning, malnutrition-associated muscle weakness, anaemia, cirrhotic cardiomyopathy, and hepato-pulmonary syndrome.22

The 6MWD score in our sample was significantly lower than those reported for healthy adults.8 For patients with cirrhosis, the 6MWD in the current study was significantly shorter compared to a Brazilian and an American studies.2,15 The male patients in the current study achieved a significantly higher mean 6MWD score than female patients. Several controlled studies have also shown that in healthy populations, males surpass females in 6MWD scores.23-26 This difference can occur because males are generally taller and have higher levels of physical activity and greater muscle mass than do females.23,26

The current study could not establish a significant correlation of 6MWD, MBDS and ECOG Performance Status with ESLD aetiology or ethnicity. In addition, no relation was found of gender with MBDS and ECOG Performance Status. Worldwide, very few studies have found a significant correlation of 6MWD with ESLD aetiology like a Brazilian study15 found a significantly shorter mean 6MWD for patients with alcoholic cirrhosis compared to patients with hepatitis B or C.

The current study has a few limitations. First, the waiting time for LT was not included which was a potential confounder in terms of altering functional status. Also, there were missing values that might have influenced the overall results. Finally, the patients were not followed-up to observe survival in the sample.