Objective: To evaluate the phenotypic detection of extended-spectrum betalactamase in multidrug-resistant acinetobacter baumannii.

Methods: The cross-sectional study was conducted at the Department of Microbiology, Fauji Foundation Hospital, Rawalpindi, Pakistan, from August 2018 to April 2019, after the ethical approval from the Institutional Review Committee. Consecutive Non- probability sampling technique was used, and comprised clinical specimens, including pus, blood, sputum, urine, tracheal tubes and canula double lumen, which were processed using standard protocols. Colonies of acinetobacter baumannii were identified by gram staining and Analytical Profile Index-20E kit. Combination disc method was used for the identification of extended-spectrum beta-lactamse. Clinical and Laboratory Standards Institute guidelines were used for antimicrobial susceptibility. Data was analysed using SPSS 22 and Sample size was calculated by using earlier study with 5 % margin of error and 95 % confidence level.

Results: Of the 78 isolates, 58(74.4%) related to females and 20(25.6%) to males. There was no extended-spectrum beta-lactamse producer. Imipenem, meropenem, cefotaxime, ampicillin and ceftazidime showed 100% resistance, while colistin and polymyxin B were sensitive to all strains. The incidence rate was high in samples isolated from tracheal tubes 47(60.3%), followed by pus 21(26.9%). Age was not found to be a significant factor (p>0.05).

Conclusion: Acinetobacter baumannii showed a high resistance to multiple drugs and was not confined to any specific age group. Colistin and polymyxin B were found to be better choices.

Acinetobacter (A.) baumannii is a gram-negative, non-motile  coccobacilli, oxidase-negative bacterium and shows a wide range of infections, including urinary tract infection, pneumonia and burn infections.1 It is responsible for nosocomial infections worldwide.2 Multidrug resistant  (MDR) strains of A. baumannii are a great concern and cause increased  death rates in intensive care unit (ICU) patients.3 Some bacterial strains produce extended spectrum beta-lactamase (ESBL) enzymes which hydrolyze beta-lactam antibiotics, including third and fourth generation of cephalosporins (ceftazidime, cefixime, cefotaxime, cefodizime, ceftizoxime, ceftriaxone and cefepime), penicillin and monobactams.4 Clavulanic acid is used as an inhibitor of beta-lactamase.5

Carbapenems were considered the drug of choice while treating A. baumannii infections.6 Due to increased used of carbapenems, carbapenem-resistant A. baumannii strains were isolated which worsened the situation, especially in ICU patients.7 ESBLs are isolated from different organisms of the Enterobacteriaceae family, including Escherichia (E.) coli, proteus spp., Klebsiella (K.) pneumoniae, Serratia (S.) marcescens, providencia spp. and citrobacter spp.8

ESBLs are reported in A. baumannii strains isolated in different countries, such as the United Kingdom, the United States, South Korea, Belgium, France and India.9 A. baumannii can remain for a long period of time on the equipment surface and human skin in ICUs and burns wards.10

Polymerase chain reaction (PCR) technology is widely used in different hospitals to study ESBL at the molecular level which is more accurate and highly reliable.11 The current study was planned to evaluate the phenotypic detection of ESBL in MDR A. baumannii.

The cross-sectional study was conducted at the Department of Microbiology, Fauji Foundation Hospital, Rawalpindi, Pakistan, from August 2018 to April 2019, after the ethical approval from the Institutional Review Committee. Consecutive Non-probability sampling technique was used, and comprised clinical samples collected from different wards and ICUs related to patients aged 1-100 years. Samples from the out-patient department (OPD) and from patients aged <1 year were excluded. The specimens, including tracheal tubes (TT), pus, blood, sputum, urine and canula double lumen (CDL), were inoculated on MacConkey and blood agar, and incubated at 37°C for 24 hours. Colonies were then confirmed by gram staining (Figure-1) and Biomeriuex (USA) Analytical Profile Index (API) 20E kit (Figure-2). 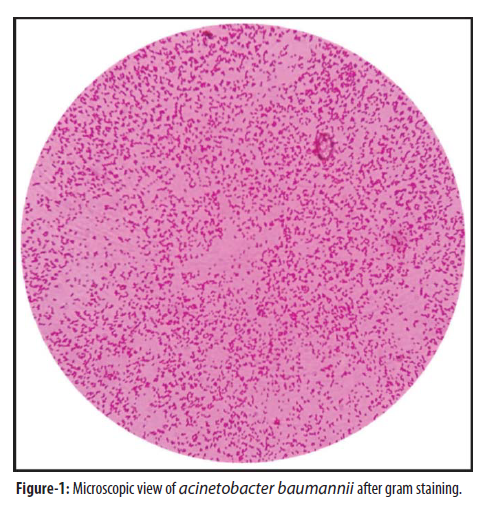 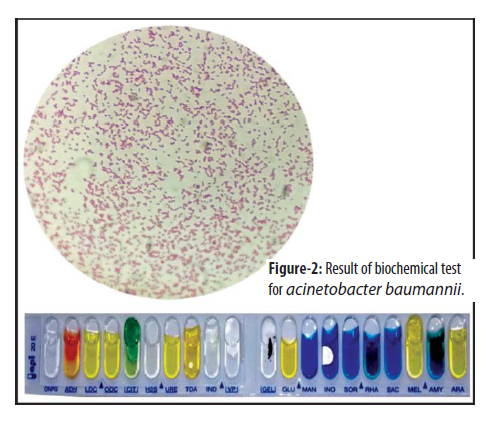 Combination disc method was used for phenotypic detection of ESBL in ceftazidime-resistant A. baumannii strains. Ceftazidime (30mg) disk alone or in combination with clavulanic acid (ceftazidime 30mg + clavulanic acid 10mg) was placed centre-to-centre at 20mm distance on Mueller Hinton agar plate streaked with suspension. The plates were than incubated at 37°C, for 24h. After incubation, the zone was observed of both discs, alone and in combination with clavulanic acid. The test was considered positive for ESBL when the zone diameter in the presence of clavulanic acid was >5mm larger than in the absence of clavulanic acid. Kirby Bauer disc diffusion method was performed for antibiotic sensitivity testing on Mueller Hinton agar plates as per the Clinical and Laboratory Standards Institute (CLSI) guidelines.12 The disks used were imipenem (10mg), meropenem (10mg), cefotaxime (30mg), ampicillin (10mg), gentamicin (10mg), ciprofloxacin (5mg), ceftazidime (30mg), amikacin (30mg), doxycycline (30mg), minocycline (30mg), colistin (10mg) and polymyxin b (300 U).

Data was analysed using SPSS 22. Chi-square test was performed for A. baumannii incidence in different age groups and p<0.05 was considered statistically significant.

Sample size was determined by using previous study with 95% confidence level and margin of error 5%.13 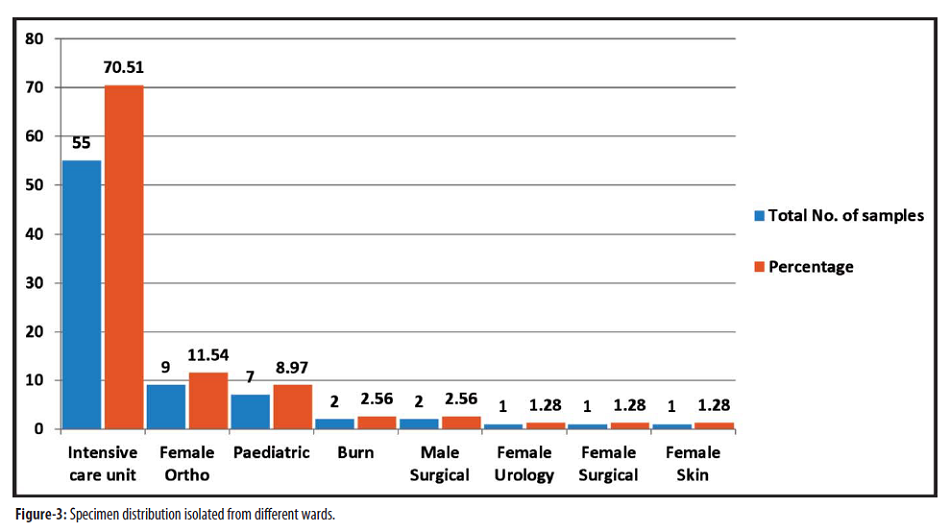 Age had no significant correlation with A. baumannii incidence (p>0.05). Among all the antibiotics, colistin and polymyxin B were sensitive to all strains (Table-2, Figure-4). 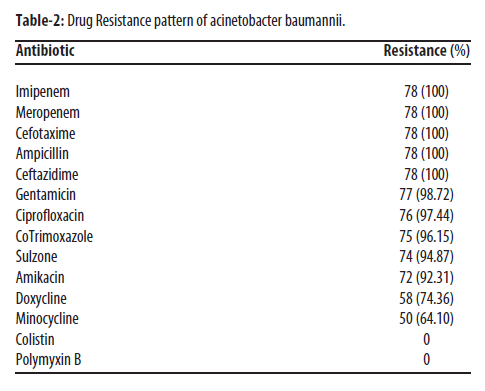 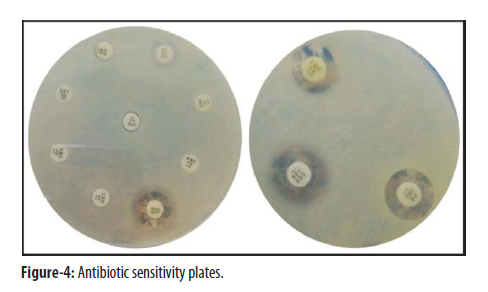 In the current study none of the A. baumannii strains was resistant to polymyxin B and colistin, which was also reported earlier.19 Two studies found 100% sensitivity of polymyxin B.20,21 The ratio of antibiotic resistance reported earlier also support the findings of the current study.22,23 The ratio of  A. baumannii  was high in respiratory samples isolated in a Pakistani study.24 A. baumannii  caused  infection in both male and female patients and the incidence was high in ICU specimens.25,26 A study in Iran showed highest isolation of A. baumannii from ICU, which correlates with the current findings.13

The single-centre orientation and cross-sectional design are limitations of the current study which also had a high numbers of TT isolates from the ICU. A multi-centre study with equal number of samples from different wards is recommended.

MDR was found in A. baumannii strains, and no strain was positive for ESBL. The incidence rate was high in TT samples isolated from the ICU.