Alexithymia and anxiety symptoms in Pakistani adolescents: A study of compounded directions

Objectives: To identify gender and age differences in alexithymia and anxiety.

Method: The cross-sectional study was conducted from November 2018 to March 2019 at Burewala, a city of South Punjab and comprised adolescents selected through random sampling method from different schools. The subjects were assessed using the Toronto Alexithymia Scale and the Hamilton Anxiety Scale. Multiple analysis of variance was applied to determine the direct and interactive effects of age groups and gender on alexithymia and anxiety symptoms.

Conclusion: The presence of clinical symptoms in schoolgoing adolescents may hinder physical and psychological health of adolescents.

Adolescence is a transitional stage characterised by several psychological and physical developments occurring from puberty to maturity.1 It is also defined as the period of transitional fluctuations and physiological changes that cause neurological and mental health disturbances.2,3 Moreover, the diverse nature of biological, psychological, social changes in adolescents occur across different developmental stages, highlighting the importance of exploring the neurological domain in relation to adolescents' development.4

While exploring the theoretical perspectives on adolescents' development, Erikson's theory5 of development seems to highlight the chronology of this phase, postulating that  developmental crises in adolescents cause different problematic outcomes and may lead adolescents to experience several other issues, such as inability to express emotions, which is generally called alexithymia,6 and anxiety characterised by apprehension and irrational concerns which destroy the individual both internally and externally.7 Severe disturbance in expressing the emotions lead the individual towards extreme anxiety.8 The disturbance in emotional expression of an individual is termed alexithymia.9 Cognitive models explain link between anxiety and alexithymia in the context of common factor of appraisal of emotional states as a core cause. An inaccurate appraisal of emotional state, expressed as externally-oriented thinking style, may trigger anxiety symptoms and difficulties in identifying and relating emotional feelings.10

The level of anxiety and alexithymia is different across different age groups. Alexithymia and anxiety symptoms have also been examined across age groups of adolescents. In the adolescent period, the individuals are more prone to having anxiety symptoms. They are not able to express their emotions.11 Literature explains that the symptoms of anxiety are normally higher in adolescents compared to adults.12 With increasing age, the level of anxiety reduces, as old people experience less anxiety compared to adolescents.13 Similarly, the rate of alexithymia is higher in teenagers compared to adults. In both males and females, the rate of alexithymia is high during adolescence.14 In the early age, disturbed family functioning increases the probability of alexithymia.15 The adolescents are not able to understand their inner emotional feelings and ability to identify them.16

Along with age, gender is an important variable to define adolescent changes. Adolescent girls tend to develop biologically two years earlier than adolescent boys, while societal norms also differ between the two groups in different societies.17 Males normally experience more alexithymia symptoms compared to the females.18 Further, gender differences are significant in terms of anxiety symptoms.  Females generally have more anxiety compared to males.19 The chances of anxiety disorders in females are twice compared to men.20 The risks of anxiety and affective disorders are more in females, as women are more susceptible to having anxiety symptoms and alexithymia.21 The rate of alexithymia is more in teenaged girls compared to teenaged boys, and these girls are not able to regulate their feelings.22 The females are not good in identifying their inner feelings compared to men. However, males are more externally-oriented in their thinking.23

The current study was planned to examine age and gender differences in alexithymia and anxiety symptoms.

The approval of research was taken from Ethical Review Board (Ref: HUM/157/2018) Department of Humanities, COMSATS university Islamabad, Lahore Campus. The cross-sectional study was conducted from November 2018 to March 2019 at Burewala, a city of South Punjab. The sample size was calculated using Raosoft calculator with 5% margin of error, 50% response distribution and 95% confidence interval (CI).24 The sample was raised using simple random sampling technique from among students of either gender aged 6-11 years at two conveniently selected private schools of Burewala, Pakistan. In the first step, a list of all potential participants from the school was obtained before a proportionate number of participants from each section were selected. In order to avoid any subjectivity or confounding effects, students identified with any psychological problem, neurological deficits, special needs or any other form of significant difficulty / disability were excluded.

Data was collected using the Toronto Alexithymia scale (TAS)25 and the Hamilton Anxiety Rating Scale (HAM-A)26. TAS consists of 20 items divided into three subscales. The first subscale is related to the difficulty in describing the feeling; the second is related to the difficulty in identifying the feelings; and the third is related to the externally-oriented thinking. The internal consistency in the shape of Cronbach's alpha for difficulty describing feelings, difficulty identifying feelings and externally-oriented thinking is 0.75, 0.73 and 0.29 respectively.25 The HAM-A scale has 14 items assessing the frequency of anxiety symptoms. Each item is scored on a 5-point scale; 0 = not present, 1= mild anxiety, 2 = moderate anxiety, 3 = severe anxiety, and 4 = very severe or grossly disabling anxiety. The total score ranges 0-56, where 0-17 indicates mild severity, 18-24 mild to moderate severity, and 25-30 moderate to severe anxiety. In the current study, continuous scores of anxiety have been used. Both scales have been previously used and found satisfactory for Pakistani samples.27,28 Alpha coefficient for the current study was 0.71. A proforma was used to collect demographic data.

Before the administration of the tools, approval was taken from the head of the respective schools. The school administration also helped in arranging parental consent. After officially signing the consent form, the students were briefed about the two data-collection tools.  Outliers, incomplete questionnaires and inappropriate responses Were excluded. Descriptive statistics, including mean, standard deviation, graphs, frequencies and percentages were calculated. Multivariate analysis of variance (MANOVA) was applied to examine the main effect as well as the interactive effect of gender and age in alexithymia and anxiety. P<0.05 was considered significant for mean differences. 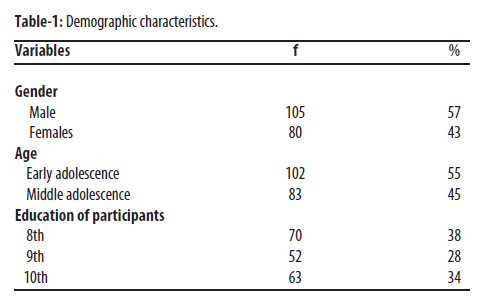 Significant difference was found on the issue of difficulty in identifying feelings in both males and females (p<0.05). 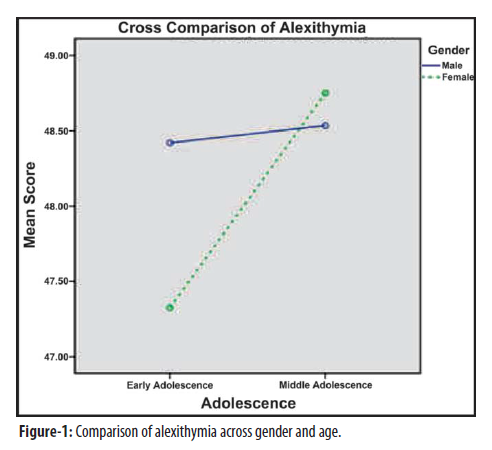 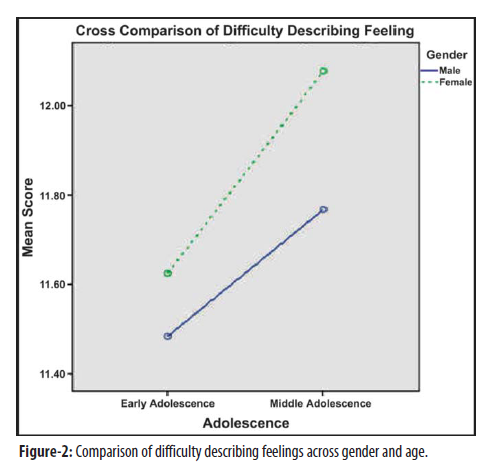 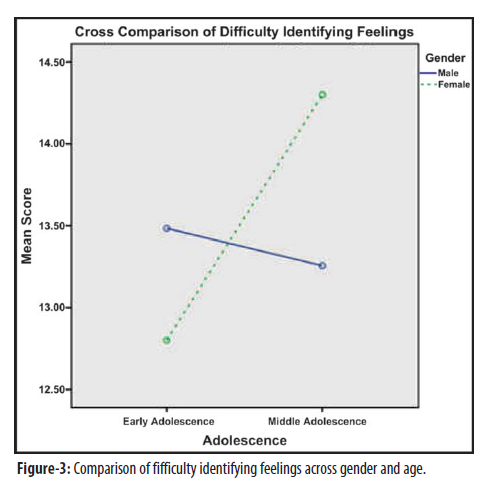 Externally-oriented thinking was high in girls in early adolescence and low in middle adolescence, while the trend was the opposite in the boys (Figure-4). 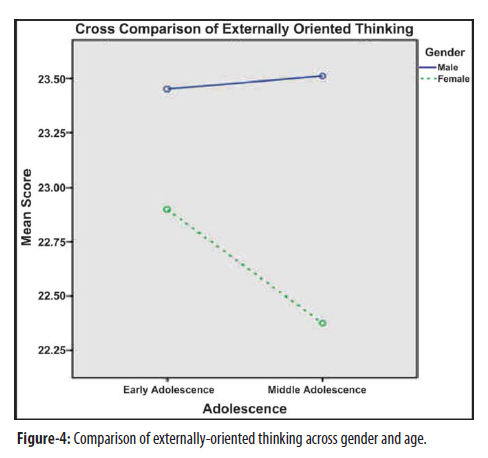 Anxiety symptoms in boys were high in early adolescence and low in middle adolescence, while the opposite was true of the girls (Figure-5). 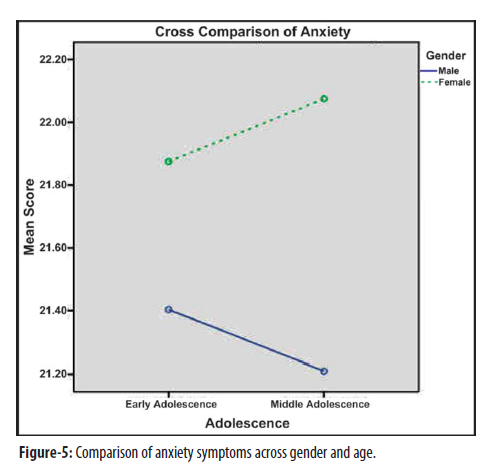 A study demonstrated that women are more prone to having anxiety disorders compared to males.15 Gender and age collectively affect the symptoms of anxiety and alexithymia.17,18

The current study has limitations as the sample was limited to subjects from two private schools of a single town which is relatively a less-developed area of the country. The families of most adolescents were not well-groomed and had little exposure which may have negatively affected the adolescents in terms of competing with their counterparts from the more developed cities. Besides, the study only included adolescents.

The presence of clinical symptoms in school going adolescents may hinder physical and psychological health of adolescents.

20.    Espina A. Alexithymia in parents of daughters with eating disorders: its relationships with psychopathological and personality variables. J Psychosom Res. 2003; 55:553-60.