Methods: This study was conducted from 2013 to 2016. The sampling and extraction of DNA was done in Department of Zoology GC University, Lahore, while the sequencing was performed at Yale University, USA. This case control study consisted of 364 subjects including 156 women diagnosed with endometriosis and 208 conveniently recruited controls. Subjects diagnosed at stage II-IV endometriosis with infertility were pooled for study. The women with adenomyosis, ovarian cancer and leiomyoma were excluded. The whole blood leukocytes were used for DNA extraction. Two important polymorphisms of exon 10 of FSHR gene were analyzed by direct DNA sequencing both in endometriosis and controls.

Infertility is among the prevailing health issues plaguing young women worldwide. Endometriosis is one of the important factors to be considered in female back pain, pelvic pain and infertility. The global burden of endometriosis is almost 7-10% which affects women of all reproductive ages,1,2 is increasing day by day,3 resulting in high healthcare expenditures and loss of reproductivity.4

Endometriosis is a "sex hormone dependent" disease that reverts menopause and subsequently affects fertility of women.5 In this disorder, endometrial tissue grafts also develop out side the uterus and consequently affect ovarian function, fallopian tubes and uterus.6 Despite enormous research on endometriosis, consistent mechanism of its development is not fully understood. Similarly, pathogenesis leading to infertility also varies in different studies, although approximately 20-50% women with endometriosis showed variations in their fertility status.7 Many  hypotheses were proposed to elucidate the exact cause of disease development; these include pelvic factors, alteration in peritoneal function, adhesions in pelvic anatomy, ovarian factors that alter oocytes and uterine factors.8 In previous decade, several studies involving various ethnicities evaluated association of SNPs of various genes  with endometriosis.9,10 The investigations involving various genes and SNPs have reported different results.

The follicle stimulating hormone (FSH) plays a significant role in the development and maturation of follicles, growth of granulosa cells, steroid synthesis regulation and synthesis of aromatase enzyme that induces androgen conversion.11,12 FSH hormone acts by binding with a trans-membrane glycoprotein receptor encoded by FSHR gene at 2p16.3.13 However, the role of FSHR gene in signal transduction pathway is still not clear.14 The amino acids of this region are found in extracellular domain of FSH binding protein. This important region is responsible for signal transduction mechanism which affect hormone binding capacity of the gene.15,16 Many genetic variants (SNPs) are present in FSHR gene that have shown to affect the pathway of signal transduction.17

This study was permitted by "Institutional Bioethics Committee" of GC University Lahore, Pakistan. This was a case control study. The sampling technique was convenient.

This study consisted of 156 infertile women (clinically and laproscopically) diagnosed with endometriosis and 208 fertile women without any history of endometriosis. Endometriosis patients were screened from the outpatient's clinics of tertiary care government hospitals (Lady Willington hospital and Sir Ganga Ram hospital Lahore, Pakistan). All women (both with and without endometriosis) had  normal levels of prolactin, thyroid and follicle stimulating hormone as well as both functional ovaries with normal morphology and ovulatory cycle of 25-35 days. The average age of women with endometriosis was 30.25 ± 5.46 years, while Body Mass Index (BMI) was < 25. All women of control group were fertile with average age of 30.59 ± 4.95 years and matched BMI of < 25. The detailed inclusion and exclusion criteria were according to published lliterature.24 Sample size calculated by formula (n = z2a/2 p (1- p)/e2) was 156.25

Hardy-Weinberg equilibrium was tested in both endometriosis and controls by chi-square test. The confidence interval and odd ratios were calculated by Sigma Plot 14.0. Data was tested for normality and Student t-test was performed to compare means of anthropometric parameters. The calculation of haplotype frequency, standard errors and linkage disequilibrium was performed by HAPLO.27 The significance level for statistical analysis was set at p<0.05.

The pairwise linkage disequilibrium was 0.76 for observed sites in endometriosis as is presented in Figure. 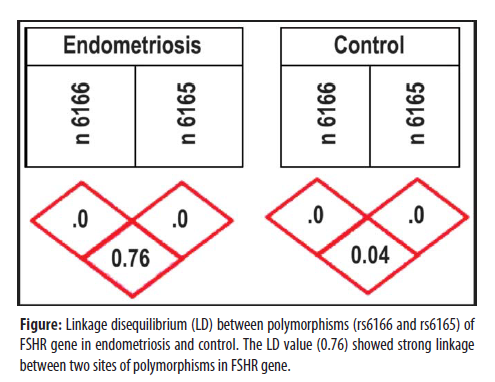 This LD value proposes that the two SNPs were in adjacent linkage disequilibrium. 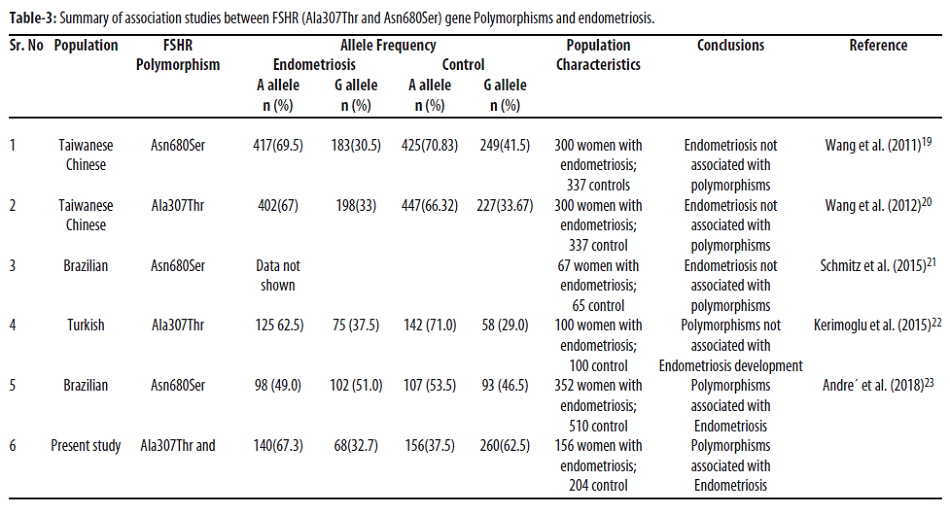 In the light of above discussion it is concluded that the Pakistani population showed diversity in their genetic makeup on the basis of significant association of FSHR gene with endometriosis.

11.    Themmen AP, Huhtaniemi IT. Mutations of gonadotropins and gonadotropin receptors: elucidating the physiology and pathophysiology of pituitary-gonadal function. Endocrine Rev. 2000; 21:551-83.