A recent study reported the dosimetric effect of limited aperture multileafcollimator on VMAT plan quality.11 They concluded that plan quality at collimator angles C0° and C(0° - 90°) was clinically acceptable for all VMAT-techniques for both prostate and head-and-neck except single-arc for head-and-neck. The significant p-values were observed for collimator angle 90° with higher normal tissue doses, poorer target coverage when compared with C0° and C(0° - 90°). Both studies showed that limited aperture MLC have different results in plan optimization compared to conventional 40 × 40 cm2 MLC aperture.10,11

A VMAT planning study of nine prostate and nine head-and-neck cancer patients was carried out on patients previously treated using the technique of Intensity Modulated Radiotherapy (IMRT) during 2014-15, at medical physics department of radiation oncology division SanBortolo hospital, Vicenza, Italy. In case of prostate cancer patients, the planning target volume (PTV) comprised of prostate gland plus half of the seminal vesicles with prescribed dose (PD) of 78 Gy (2 Gy/fraction), while the delineated organs-at-risk (OARs) were rectum and bladder. The PTV78 was defined from CTV by adding a standard margin of 0.7 cm transverse and 0.9 cm in craniocaudal directions for all patients. In case of head-and-neckcancers, a group of nine patients with different target geometries and prescribed doses for carcinoma of oral cavity, hypopharynx, larynx andoropharynx was considered. Five treatments were planned for 70/60 Gy (2/1.71Gy/fraction), and four (post operative) treatments were planned for 60/54 Gy (2/1.8 Gy/fraction) for PTVboost/ PTVelective respectively. Primary and neck nodes gross tumour volume (GTV) were all gross disease on physical examination with endoscopy and imaging. Usually clinical target volume (CTV) was the GTV plus 5 mm for the microscopic spread of disease, and finally the planning target volume was CTV plus 3 mm. Organs at risk were identified on each scan segmented where appropriate: larynx, oral-cavity, mandible, brainstem, spinal cord, and parotid glands.

In the SynergyS® Linac collimation system(Beam Modulator™) has 40 leaf pairs, each of a nominal width 4mm at the isocentre. The 21cm (along the leaf direction) by 16cm (perpendicular to the leaf movement direction) in isocentreplane is the maximum field size.12 Using the SmartArc™ module13 Pinnacle3 TPS (version 9.2, Philips Healthcare) VMAT plans were simulated for a 6MV photon beam. In this study, for VMAT delivery, SynergyS® specific parameters integrated in the SmartArc™ module includes: maximum gantry speed of 5.5°/s, maximum leaf speed of 2.4 cm/s, leaf motion constraint of 0.469 cm/° and five fixed dose rate levels of 35, 75, 150, 300 and 600 MU/min.

Three VMAT plans for each of prostate and head-and-neck patient were optimized by invoking the same set of well optimized dose-volume-objective (DVO) functions, to make a rigorous comparison among different VMAT techniques. It was planned to achieve acceptable target dose coverage (D95% > 95%) for the PTV(boost) however, this (D95% > 95%) constraint was not strictly followed for PTV(elective). Dose volume constraints for PTV and OARs were noted in the data tables.

Single arc (SA), dual arc (DA) and two 'independent single arcs' (ISAs) VMAT techniques were optimized both for prostate and head-and-neck cancers. An arc length of 181° - 179° (clockwise) for prostate and 185° - 175° (clockwise) for head-and-neck, a collimator (C) angle of 45°14a gantry space (GS) resolution of 4° (4° spacing between subsequent gantry control points),10 and a maximum delivery time (MDT) of 90 seconds for prostate and 110 seconds for head-and-neck15 were selected. In the SmartArc™ module, if the user defines plan optimization parameters in a single arc of 360° (clockwise) and select the option of 'two-arcs' then a second arc (counter-clockwise) with same planning parameters will be added automatically, providing the setup of a dual arc VMAT plan. In a dual arc mode, one arc will focus to the left and one to the right side of targets divided by OARs as described by author,16 which reduced the leaf opening over the OAR and thereby the dose delivered to it. Two 'independent' single arcs (ISAs) of 360 (clockwise and counter-clockwise) coupled in a single optimization process could provide another 'dual arc like' setup. In ISAs both arcs are simultaneously optimized and each arc focuses on the PTV independently, thereby producing similar segments.

Plan quality was assessed by examining the ability of each planning technique to achieve defined clinical objectives. PTV doses were collected for a fixed fraction of volume using following dose indices: D95%, D2%, D1cc, Conformity index (CI)and Homogeneity index (HI). Doses to the OARs were collected in the form of percentage volume of an organ receiving x-dose (VxGy)and mean dose (Dmean) for parotids. The CI compares the 95% isodose volume with the covered PTV volume, has an optimal value of '1', and is calculated as:

It is assumed that dual arc VMAT, due to its involved focusing process,16 would provide comparable or better plan quality in terms of target coverage and sparing of organs at risk, than two independent single arcs. A 'two-sided student t-test' assuming unequal variances with statistical significance set to p < 0.05 was used to check significant differences between dose indices of plans; among different VMAT techniques.17

Dosimetric validation was performed between phantom measured and TPS calculated doses for randomly selected VMAT plans (DA and ISAs VMAT plans for two prostate and two head and neck cases were selected. All measurements were performed in a single session using the ArcCHECK™ phantom and SNC Patient software (version 6.2, Sun Nuclear Inc, Melbourne, FL).17 Van Dyk18 distance-to-agreement (DTA) (dose difference is normalized to global maximum) criteria of gamma global (g-global) 3%/3 mm > 95% was used for comparison. The dosimetric measurements were made in absolute dose mode with a low-dose threshold of 10 cGy.

The dose-volume indices (DIs) of the PTV (D95%, D2%, D1cc) and OARs (VxGy) were normalized to prescribed doses and volumes except HI. The CI is presented in percentage. Averages (and ranges) for observed DIs for prostate and head-and-neck PTV and OARs doses are noted in Table-1 for different VMAT techniques, and their respective p-values in Table-2. The doses for head-and-neck organs at risk (larynx, mandible oral cavity and brainstem) were well below from defined constraints  and clinical acceptable. Therefore, were not reported in the data tables, except spinal cord and parotid glands.

All VMAT techniques produced clinically acceptable plans for prostate (Table-1) and no significant differences were observed between DA and ISAs for PTV metrics (Table-2). 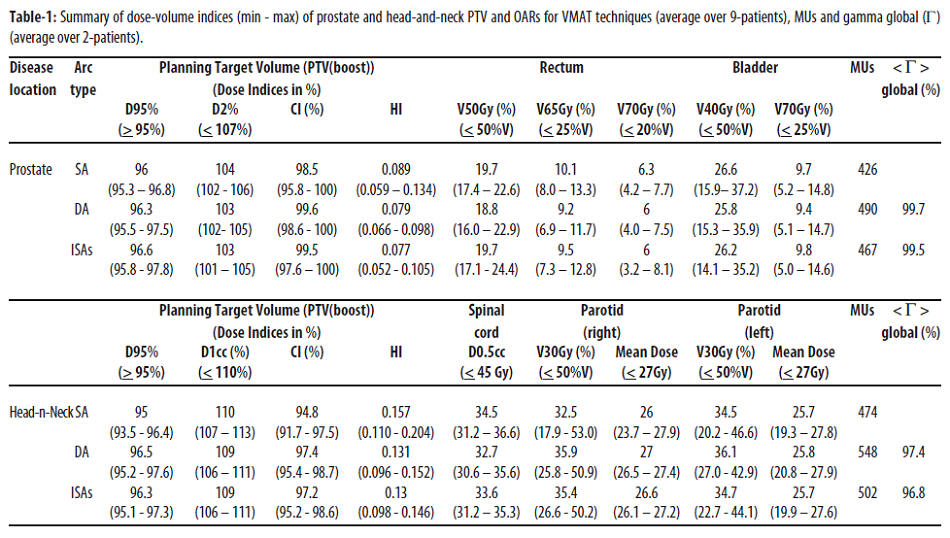 It was observed that DA spared more rectum volume in medium (V50Gy), (V65Gy) and high dose (V70Gy) regions than ISAs (Table-1). SA could not achieve the target coverage (D95% > 95%) in some of head-and-neck cases (Table-1 (SA 95.0 (93.5 - 96.4)) for PTV (boost). DA showed a trend of better target coverage and conformity index compared to ISAs for head-and-neck with similar sparing of OARs (Table-1), however their comparing p-values were not significant (Table-2). SA produced similar plans to DA and ISAs for prostate (Table-1), while for head-and-neck, DA and ISAs significantly improved target coverage compared to SA (Table-2). DA used 5% and 9% higher monitor units than ISAs, for prostate and head-and-neck plans, respectively (Table-1). 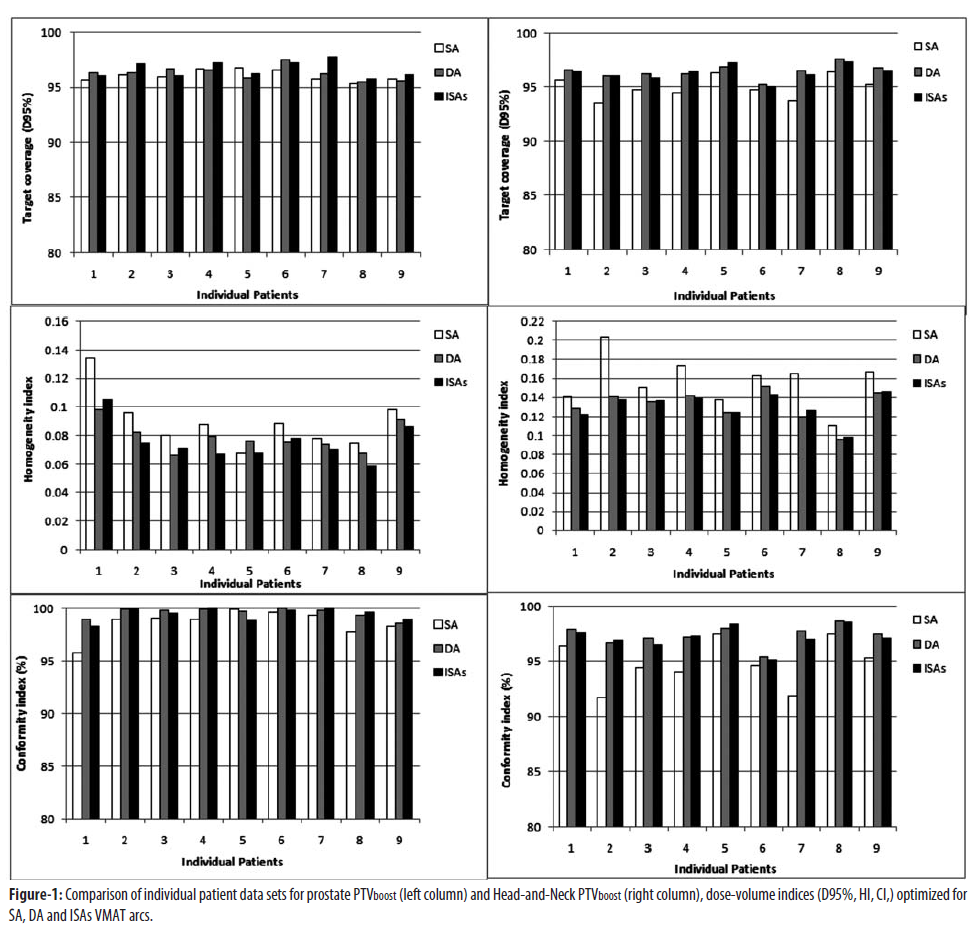 Whereas for prostate and head-and-neck, the dose distributions in a typical transverse slice for SA and DA VMAT techniques are shown in Figure-2 and Figure-3, respectively. 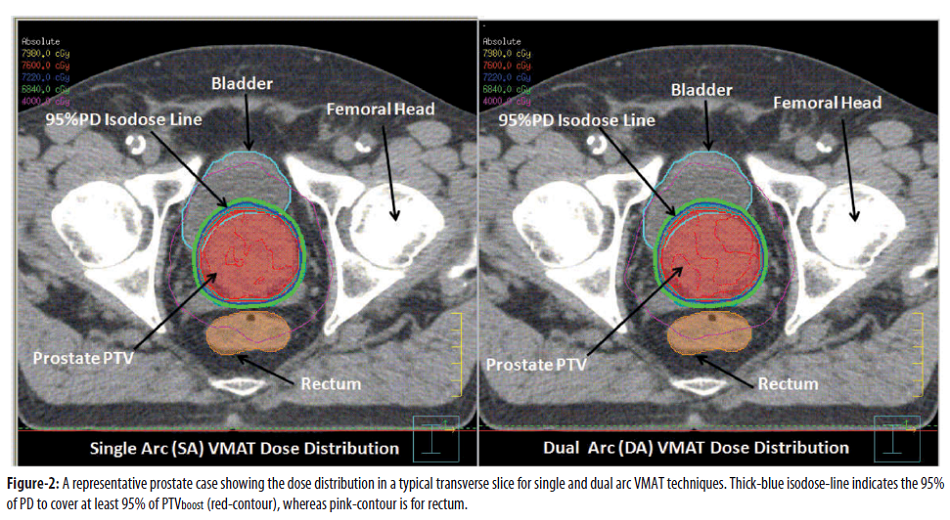 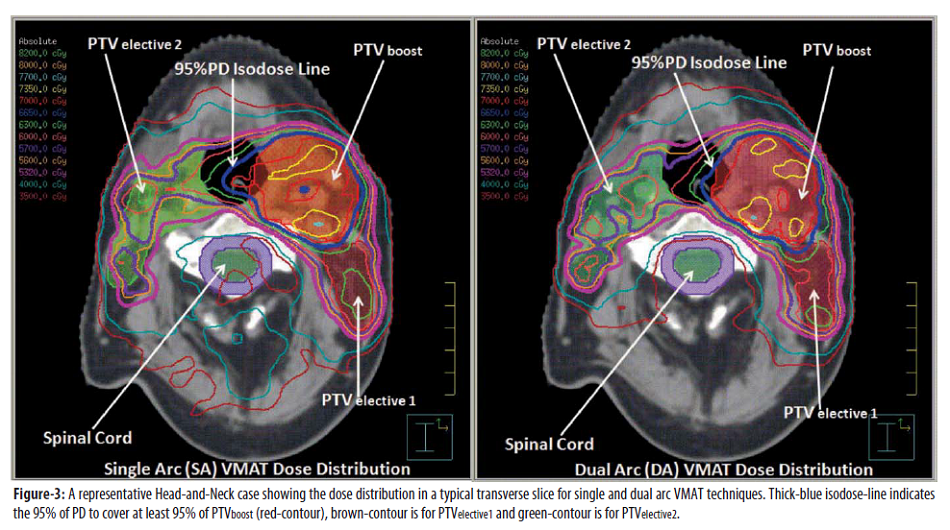 In this study, three different VMAT arcs are assessed quantitatively and qualitatively in terms of VMAT plan quality using the same dose volume objectives and algorithm, demonstrating the use of ElektaSynergyS® Linac equipped with a Beam Modulator™, which has the maximum field size of 21 × 16 cm2. Whereas most of the earlier VMAT plan optimization studies presented in literature were simulated for Linac(s) with apertures of 40 × 40 cm2.

The target coverage for dual arc (DA) and two combined independent single arcs (ISAs) were found to be very similar and plans were clinically acceptable for both prostate and head-and-neck cases. This might be due to similar available modulation space, equal number of control points and similar angle of collimation. Briefly, irradiated partial volumes of OARs for both prostate and head-and-neck at fixed amount of dose were well below from their respective tolerance levels. The spinal cord dose constraints were achieved for all VMAT techniques using a single maximum dose objective. The calculated p-values did not show any significant variation between DA and ISAs VMAT techniques in terms of target coverage for both organs.

In case of prostate, a notable advantage of DA over ISAs was better, sparing of rectum volumes 4.8% and 3.3% in the medium (V50Gy) and high dose (V65Gy) regions, respectively. The DA technique provided better sparing of OARs by focusing on one half of PTV for each arc, thereby minimizing the leaf opening over the OARs, as reported earlier.16 The dose diminution in medium and high dose regions for rectum-volumes by DA might reduce rectum side effects.19 Single arc VMAT produced all clinically acceptable plans for prostate and is considered sufficient for dose planning in our study; however, DA and ISAs improved target coverage and sparing of OARs, but at the cost of increased plan-optimization and arc-delivery times.

In case of head-and-neck, DA and ISAs significantly improved the target dose coverage, conformity and HI over SA. The significant p-values were noted in, similar results have been reported by authors for the optimization of SA and DA.8 The magnitude of parotid sparing (V30Gy) and mean-dose between DA and ISAs were comparable for head-and-neck plans. SA might be an appropriate treatment planning solution for simple cases. But for complicated tumour sites like head-and-neck where multiple PTVs and organs at risk are defined, multiple modulated arcs provide better treatment plans at the cost of increased plan-optimization and delivery time.20 The author recommended the use of SA for head-and-neck planning when using Linac aperture of 40 × 40 cm2.9 Whereas in our results, SA is inefficient in achieving treatment planning goals (D95%, HI, CI,)in majority of cases, when using limited aperture MLC of Beam Modulator™, and the spread of low-dose-bath is higher for SA compared to DA and ISAs.

In general DA and ISAs techniques provided higher degrees of freedom while optimizing both arcs simultaneously compared to SA. It is supported by other studies reported that a second arc adds more degrees of freedom of possible leaf positions thus providing better treatment plans than single arc.8 In complicated dose planning sites like head-and-neck, ISAs could be used an alternative to DA, provided DA failed to achieve dose-planning objectives. Dual arc required more MUs than ISAs, which in turn used more monitor units than single arc. In this study, a similar arc delivery time was noted between DA and ISAs VMAT techniques for individual planned organs. An independent dosimetric verification was performed for randomly selected VMAT plans to ensure that the calculated dose distributions could be delivered as planned. All selected plans passed the defined criteria of g-global (3%/3 mm) > 95% and their average results were noted.

Single arc is sufficient for prostate, while inefficient in case of head-and-neck dose-planning, while using 'Elekta Beam-Modulator' collimation system. Dual arc and two combined independent-single-arcs provided similar PTV coverage, while DA provided better sparing of organs at risk. In complicated dose-planning cases ISAs can be used an alternative to DA. Similar treatment delivery times were observed for DA and ISAs VMAT techniques. Thus, optimal choice of VMAT arc is another degree of freedom in order to obtain desired PTV dose distributions and sparing of organs at risk.