Conclusion: The extent of hypermobility among children with Autism Spectrum Disorder was 60%, that is, 70 out of 117 children had hypermobility. Our results also suggested that the age, height, weight, and BMI of the child had a moderate negative correlation with hypermobility.

Autism Spectrum Disorder (ASD) is an umbrella term, which includes conditions with problems of socialization, communication, and stereotypic problems.1 Even though psychological and behavioural problems are commonly observed in children with ASD, motor impairments are not uncommon, the motor problems in these children include difficulties in gait,2 balance, coordination, fine and gross motor skills3 and sensory motor integration.4 Moreover, all these motor impairments are not stable, and they are different between age groups.5,6 The reasons for these motor problems are hypothesized directly to involve minimal brain damage, deficiency in motor control, and motor learning, and indirectly to muscle weakness, hypotonicity, hypermobility, and ligament laxity. Joint hypermobility refers to the excess of range of joint extensibility beyond the normal limits.7

Some studies indicated hypermobility in children with ASDs, but the clear amount of clarification is not there concerning the quantification of ligament laxity.8,9 Klein et al. compared hypermobility between typically developing children and children with ASD. This study used a general range of motion (ROM) measured using a universal goniometer. The study did not use any criteria or a valid measurement tool that is specific to quantify the overall extent of hypermobility.9

Clark et al. reported that adults with joint hypermobility had chronic widespread pain, autonomic symptoms, gastrointestinal symptoms, and chronic fatigue syndrome.10 Children with ASD who have hypermobility might also have similar issues, which the child would not be able to express due to issues with communication and social interaction. Hypermobility in the joints might lead to arthritis, low back pain,11 altered neuromuscular control during activity12 and it might even affect the muscle activation pattern.13

A recent review was published by Velasco et al. in 2018 in Frontiers of Psychiatry titled "Autism, Joint Hypermobility-Related Disorders and Pain" concluded that "Considering the high probability that pain remains disregarded and untreated in people with ASD due to communication and methodological difficulties, increasing awareness about the interconnection between ASD and hypermobility-related disorders is relevant, since it might help identify those ASD patients susceptible to chronic pain".14

We, as Paediatric Physical Therapists, see this problem in children with autism on a day to day basis. The children with ASD were suffering from hypermobility and related problems like pain and proprioceptive deficits. Due to their communication difficulties children cannot express this problem. Their sensory behavioural pattern changes due to these problems.

Even though hypermobility exists in this population, there is no published evidence about this issue. This scientific research would create awareness among the medical team and and identify possible solutions to overcome this problem. Hence the current study aimed to determine the extent of hypermobility using the Beighton score among children with ASD and to find factors affecting this hypermobility.

In this cross-sectional study, we used the center for clinical research and biostatistics website15 for calculating sample size, which amounted to a total of 117 children. As per our previous observation of such cases in our clinic, we observed that at least eight children out of one hundred cases of ASD had ligament laxity and we used this as a pilot observation while calculating the sample size. The formula used for sample size calculation was Z1-a/2 2 X p(1-p)/d2 where Z1-a/2 is standard normal variate, at 5% type I error (p<0.05) it is 1.96. In the formula p is the expected proportion in population based on previous studies or pilot studies. In our study we kept the p as 8 percent based on our pilot observations. In the equation d is the absolute error or precision which must be decided by the researcher, in our study the absolute error was kept as standard 5 percent. By considering all the above-mentioned values we calculated the sample size and it was 1.96 X 0.08(1-0.08) / 0.05 = 117 approximately.

These children with ASD were included in the study by convenience sampling. The Research Ethics Committee approved this study (REC # 2017-01-13). A developmental paediatrician, paediatric neurologist, psychiatrist or clinical psychologist diagnosed the child. They used the Diagnostic and Statistical Manual of Mental Disorders 5 (DSM-5) criteria for diagnosing ASD. We recruited all the children by referral to our center by paediatricians, neurologists, special schools and psychologists. The study is conducted in King Khalid University Hospital of Saudi Arabia. The duration of the study was one year.

Children with a formal diagnosis of ASD of either gender between the ages of 2 and 17 years were included in the study. The mean age was 7.23 ± 3.62 years. Children with ASD who had active convulsive disorders or recent musculoskeletal injuries or were under medications that alter the muscle tone were excluded.

Written consent was obtained from the parents of children with ASD. Out of 146 children selected, data was collected from 117 children; the other 29 children were excluded due to various reasons, such as unable to relax their body for measurement, anxious, and hyperactivity.

The general demographic characteristics of each child was noted. Detecto Eye-Level Beam Scale with Height Rod was used to measure weight and height. By using weight in KG/ Height in meter square we calculated BMI on the excel sheet. The evaluation was done by a 10-years' experienced physical therapist as per the standard protocol of the Beighton scoring system.16 The Beighton score is one of the common methods for testing hypermobility in children.17,18 The test has good intra and interrater reliability19 and validity.16 A major part of the test is passive except for forward bending, so it is easy to administer. The score was from 0 to 9 based on bilateral measurements.

Anthropometric parameters such as height, weight, BMI were measured and Beighton scores for hypermobility were assessed in these children. The details of these measurements are presented in Table-1. 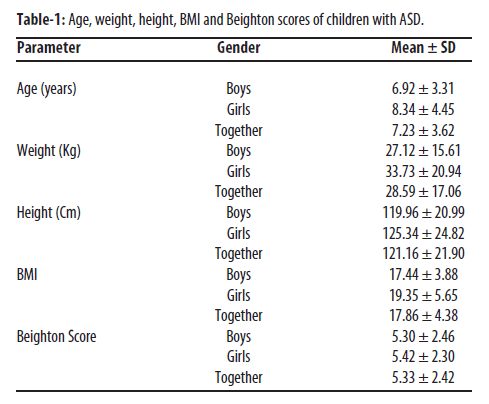 Klein et al. conducted a study to determine the abnormalities in joint mobility and gait in children with ASD.9 In their study, they measured index finger, wrist, elbow and ankle joints' flexion, and extension and compared them with their typically developing peers.9 They found that except for the elbow joint, all three other joints showed significant hypermobility. In our study, we also found 60 percent of children with ASD showed increased ROM and hypermobility.

In our study, we had more boys who are affected with autism than girls, approximately 3.5:1 ratio, this was on par with other existing evidence, which mentions a ratio of incidence 4:1.20 In the current study, we had a negative correlation of BMI with hypermobility, which was also shown in another study of normal children in the Indian population by Sanjay et al.21

Velaso et al. also believed that the children with ASD will have joint hypermobility due to which the children may suffer with multi system fragility leading to weak proprioception and motor system which causes musculoskeletal trauma and pain. Moreover, the children with ASD may not be able to express these issues due to communication difficulties which leads to irritability and increased stress levels.22

Even though our study intended to find hypermobility in children with ASD, in some of the older children we found more muscle tightness.24,25 During the evaluation, we were not ready for the quantitative measuring of tightness, which is the reason we could not determine the details of it. This was also supported in our result by correlation analysis, which shows a negative correlation between age, height, weight and Beighton score.

Restricting the sample to one city and having a wide age group from 2 to 17 years are some of the limitations of this study. Even though we have seen some correlations, which does not mean association and does not identify the cause.

Disclaimer: The abstract has not been presented or published in a conference or an abstract book.

Conflict of Interest: The authors do not have any conflicts of interests