Objective: To explore the socio-demographic determinants of nutritional status of Pakistani women.

Methods: The retrospective secondary-data study was conducted at Lahore College for Women University, Lahore, Pakistan from March to July 2019, and comprised a review of the Pakistan Demographic and Health Survey 2017-18 for which the data-collection period was from November 22, 2017, to April 30, 2018. Body mass index was taken as a reflection of the women's nutritional status. Ordinary least square and quantile regression models were used for statistical analysis.

Conclusion: Overweight/obesity was found to be a more serious problem compared to under-nutrition in Pakistani women.

Malnutrition and obesity are both hazards for healthy life. Consequences of malnutrition are exposure to disease and increase in mortality rates in the developing countries.1 Risk of poor pregnancy outcome increases if mother is under-nutrition. A child's development entirely depends on the mother's nutritional status during the first 15 months of life.2 Obesity is another form of malnutrition which is also a risk factor for several diseases, including hypertension (HYN), stroke, diabetes mellitus (DM), dyslipidaemia as well as breast and colon cancers.3 Globally, obesity is emerging as an epidemic.3,4 At least 2.8 million adults die each year as a result of being overweight and obese.5

It is a positive indication that the proportion of underweight Pakistani women reduced from 14% to 9%, but, on the other side, the proportion of overweight and obese women has risen 12%, from 40% to 52%.6 Globally, Pakistan is ranked 9th among the most obese nations, and which is more prevalent in women (25.5%) compared to men (18.8%).7,8 Dietary habits of Pakistani population has changed, with fast food getting popularity, particularly in the youth.8 Pakistanis consume energy-dense diet in the form of ghee, sugar and carbohydrates. Celebrations of important events in Pakistani culture is incomplete without the intake of high-calorie food.8

The level of chronic energy deficiency (CED) and obesity vary from region to region and from country to country, as it depends on eating habits and norms and also on the environmental condition of the region. This necessitates identification of risk factors affecting the nutritional status of Pakistani women using body mass index (BMI) as a proxy measure of CED syndrome. For assessing adult nutritional status, BMI is a conventional tool in both clinical and public health practice. BMI is a value derived from the mass and height of a person, and is recognised as Quetelet's index. It is calculated by dividing weight in kilograms by height in meters squared (kg/m2) and its cut-offs for Asian populations are: underweight <18.5, normal 18.5-22.9, overweight 23-24.9, and obese >25.9,10 CED (BMI <18.5) and obesity (BMI >25) are two basic indicators of malnutrition.  Population with BMI range 23-27·5 is considered at increased risk, and BMI >27·5 at high risk.10

The current study was planned to explore the risk factors influencing the nutritional status of women in Pakistan.

The retrospective secondary-data study was conducted at Lahore College for Women University, Lahore, Pakistan from March to July 2019, and comprised a review of the Pakistan Demographic and Health Survey (PDHS) 2017-186 For which the data-collection period was from November 22, 2017, to April 30, 2018. It was the fourth such survey conducted as part of the worldwide Demographic and Health Surveys project.6

Data collected was related to women of reproductive age 15-49 years. Body weights and heights of the individuals were part of PDHS 2017-18 document, and BMI was calculated by the researchers. Women who were pregnant and who had given birth in the 2 months preceding the survey were excluded.

The response variable in the current study was BMI. It is continuous variable in nature, so ordinary least square (OLS) was used as a benchmark model to study the mean effect of factors on the outcome variable. Further, the quantile regression (QR) model was used to examine the patterns of risk factor's effects at different points of the conditional distribution of the BMI. QR provides a more comprehensive picture of the data about the impact of covariates on the entire distribution of BMI and it is more robust to non-normal errors and outliers.11 Results of OLS and QR models were plotted to compare how level/trend of coefficients changed in both the models.12 Individuals at the uppermost end of BMI distribution were more likely to be obese and in the lowermost end of the BMI distribution were likely to be under-nourished. The increasing trend of coefficients with positive signs of QR at the uppermost end of the BMI distribution implied that for any particular factor there was likelihood of overweight/obesity due to that factor.12-14 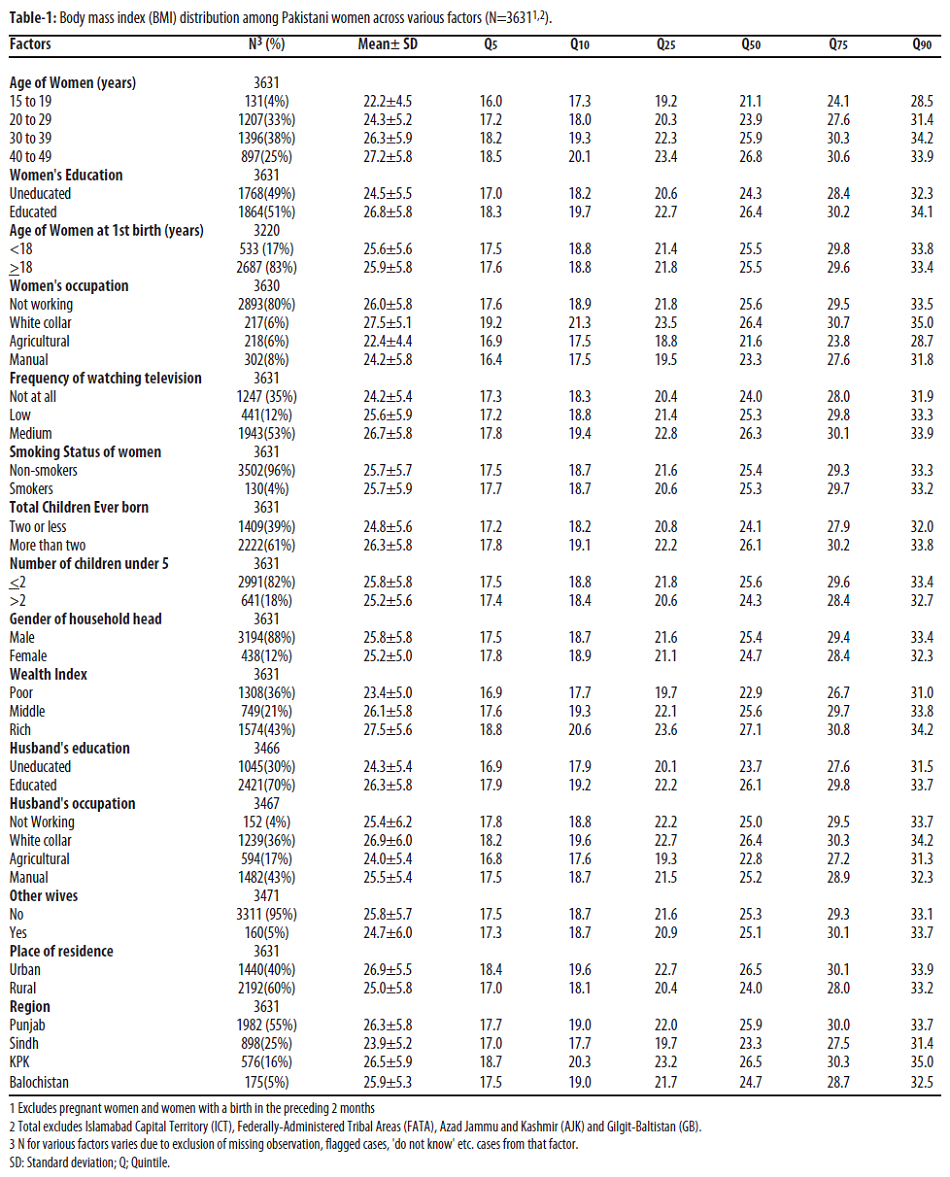 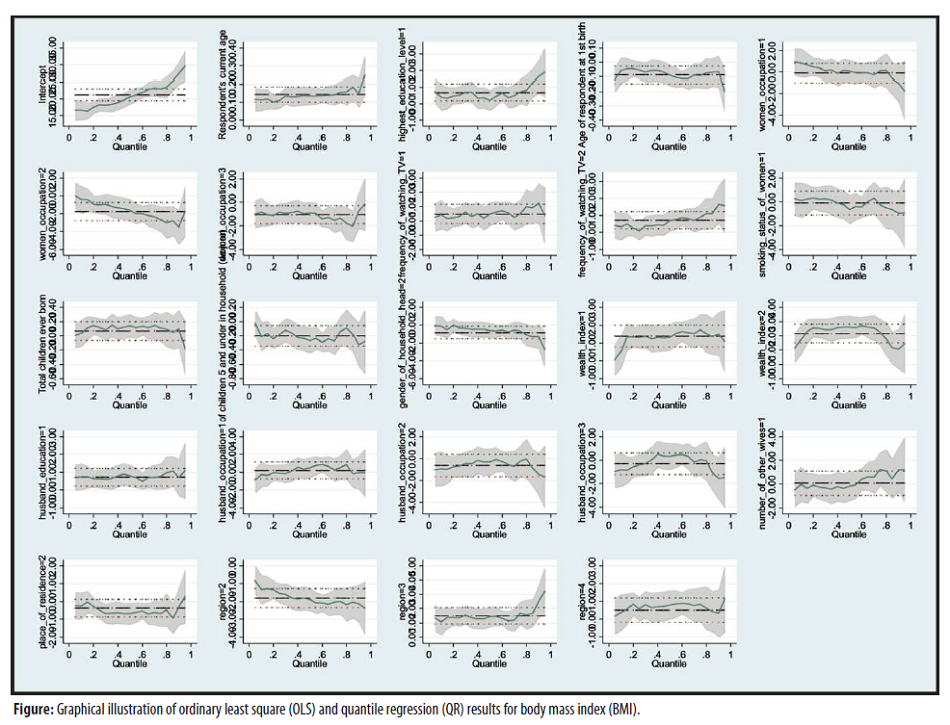 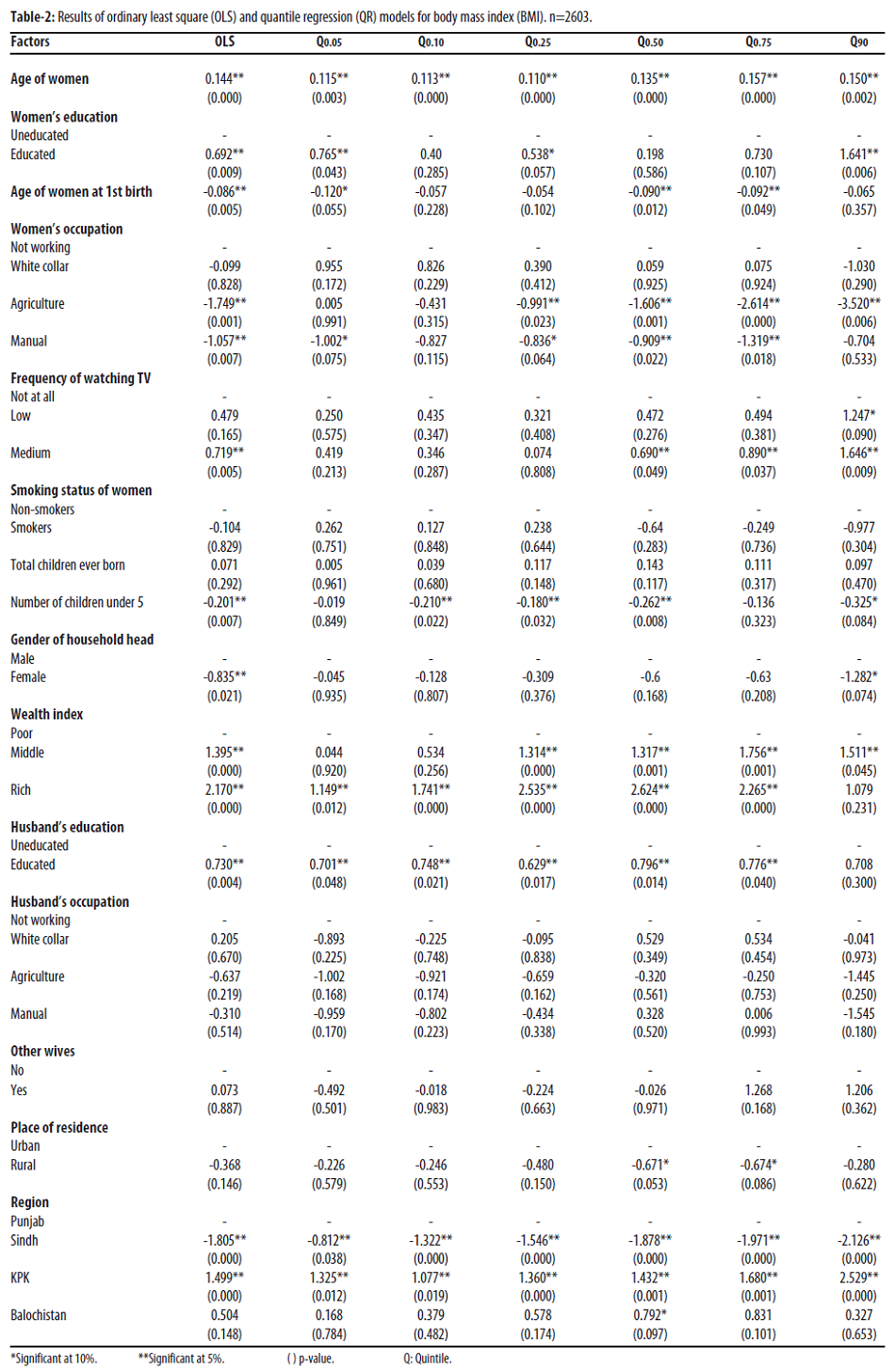 The nutritional status of women varies with increase in age. Proportion of overweight and obesity increases with increasing age. The main finding of the current study in relation to age was that as one moved from the lowest quantile to the highest, the effect of women's age on BMI was significant and was U-shaped, indicating that the prevalence of overweight/obesity increases with age.13 This finding is consistent with a study conducted in Namibia.12 Adults have significantly higher BMI due to biological changes in the body.15 Also, physical activities of women decrease with age.

Education is perceived as the engine of healthy lifestyle. Effect of education on women's BMI was positive across all quantiles though not significant in all cases. As the education level of women increases, awareness about food and restaurant is also increased.16 Educated women are independent to make decisions and have greater access to household resources that leads to increased BMI and sometimes results in obesity.17,18

Age of women at first birth was negatively associated with women's BMI. Women who had given their first birth after age 18 had more chances of being thin. The decline in the prevalence of anaemia was reported with an increase in age at the time of marriage.19

Women's paid employment is associated with financial autonomy. In Ethiopia, women who were paid for their work had improved nutritional status than those who were unemployed.20 In the current study, women engaged in white-collar occupations were more likely to  have higher BMI, but this situation was prevalent for lower distribution of BMI. For the highest tail of BMI the effect was the opposite. This is not unexpected because white-collar workers are likely to be at desk jobs, but at the same time they are also conscious/aware about healthy lifestyle. Women engaged in agricultural occupation had low BMI than women not doing any work because agricultural occupation requires physical engagement. Negative effect was also observed in the lowest quantiles in a study from Ghana.12 Sedentary lifestyle, like watching TV for long duration, leads to physical inactivity, resulting in greater risk of obesity. The same findings were reported earlier.21 Watching television in young people is also associated with a higher energy intake and poor diet.22

Women who smoked had a non-significantly lower BMI than non-smoking women for upper tail of distribution of BMI, whereas for lower tail of BMI, the effect was non-significantly positive. The reason of positive effect of smoking at lower distribution of BMI was because smoking causes central fat accumulation, especially in women.23 Similar findings were reported in a study conducted in Faisalabad.24

Total children ever born showed positive association with BMI for different levels of distribution of BMI. Excessive use of high-energy food during and after pregnancy is responsible for the result. Indirect impact of age may also be a reason. On the contrary, the impact of number of children aged <5 in the household was negative due to increase in mother's activities to look after the children.

Women with female household head had lower BMI than women who had male household head due to better nutritional status than female-headed households.25 Nutritional intake depends on affordability. BMI level was higher for middle and rich women compared to poor women. Poor women have poor nutrition status.26 High income group consumes more junk food.27 Assistance by servants and use of mechanical appliances for household chores is the reason of increasing BMI among wealthy women.27 Polygamous women had lower BMI than monogamous women for lower distribution of BMI and it might be due to sharing in household resources. On the contrary, in Ghana, polygamous women had higher BMI than monogamous women.12

Disparity persisted in the nutritional status of rural and urban residents. In developing countries, urbanisation is rapidly increasing which is associated with modern eating behaviours, like eating out and consuming fast food. The rate of obesity was observed to be significantly higher for urban women compared to rural women. Drivers of inequality are socio-economic status, fast food consumption and excessive use of mechanical transportation.27

Women living in Sindh had lower BMI compared to other regions. Regional variation in women's nutritional status was also reported in another study.27 It was documented in a study that the rate of obesity in India varied in different provinces.28 Reason of higher BMI for women's living in KP and Balochistan compared to Punjab may be less education and awareness regarding healthy lifestyle and also immobility outside the home due to cultural norms.

The strength of the current study is the fact that it is based on the most recent nationally representative data of Pakistan. The limitation of the study is that only females aged 15-49 years were considered.

On the basis of the findings, it is recommended that efforts should be made to discourage the habit of watching TV excessively. Also, awareness campaigns for white-collar workers and women of advanced ages must be initiated to encourage them to do regular physical exercise.

Overweight and obesity seem to be becoming a more serious problem compared to under-nutrition in Pakistani women. Privileged women, with respect to education, economic status, urbanisation and sedentary lifestyle, carried more odds of being on the higher side of BMI.

10.    WHO Expert Consultation. Appropriate body-mass index for Asian populations and its implications for policy and intervention strategies. Lancet. 2004; 363:157-63.

21.    Ghose B. Frequency of TV viewing and prevalence of overweight and obesity among adult women in Bangladesh: a cross-sectional study. BMJ open. 2017; 7:e014399.

27.    Janjua NZ, Mahmood B, Bhatti JA, Khan MI. Association of household and community socioeconomic position and urbanicity with underweight and overweight among women in Pakistan. PloS one. 2015; 10:e0122314.

The effects of a static exercise programme versus Swiss ball training for core muscles of the lower back and pelvic region in patients with low back pain after child delivery. A single blind randomized control trial