Objective: Current study was designed to isolate the pathogens from burn wounds and determine the antibiogram of these isolates.

Methods: A total of 85 samples were collected from burn patients with the history of different weeks of hospitalization in various public and private hospitals of Faisalabad during September 2017-July 2019 and shifted to Department of Microbiology, Government College University, Faisalabad for further processing. Isolation and identification of the pathogens was done through conventional microbiological procedures. Disc diffusion method was used for the determination of antibacterial and antifungal activity.

Results:  A total of 40(91%) samples were found positive for the presence of bacterial or fungal pathogens. Commonly isolated pathogens were Staphylococcus aureus 15 (21.4%), Pseudomonas aeruginosa 15 (21.4%), Bacillus subtilis 11(15.7%), Escherichia coli 10(14.2%), Candida albicans 8(11.4%), Aspergillus flavus 6(8.5%) and Salmonella Typhi 5(7.1%). Highest resistance was found against S. aureus and P. aeruginosa. Cefotaxime was the least effective antibiotic, while Gentamicin and Amphotericin-B were the mosteffective antimicrobial drugs against bacterial and fungal pathogens, respectively.

Conclusion: Taking together it was concluded that most isolated pathogen was S. aureus and P. aeruginosa followed by B. subtilis, E. coli, C. albicans, A. flavus and S. typhi from burn wound in hospitalized patients. Anti-biogram studies showed S. aureus and P. aeruginosa were the most resistant pathogens whereas S. typhi, C. albicans and A. flavus were susceptible to various commonly used antibiotics. Cefotaxime was the least effective antibiotic, while Gentamicin and Amphotericin-B were the most effective antimicrobial drugs against bacterial and fungal pathogens, respectively. It is suggested that alternate anti-microbial agents should be investigated to control the infections.

Burn is a type of injury to the skin caused by electricity, heat and/or chemicals.1 Burns are a common cause of death and disability and require long period of rehabilitation. A burn is a major cause of high mortality and morbidity globally; particularly in developing countries.2 Almost 6 million patients, including 4 million women seek medical help for burns annually all over the world.3 About 75% of mortality in burn injuries is due to infection rather than osmotic shock and hypovolaemia.4

Due to destroyed skin barrier and suppressed immune system, burn patients are at high risk of acquiring infection. Immunocompromising effect of burn, prolonged hospital stay, invasive diagnostic and therapeutic procedures are responsible for nosocomial infections in burn patients as well. Factors that contribute to infection are size of burn body surface, its depth, patient’s age, microorganism’s types involved, their number and pathogenesis.5

Pathogens that cause infection in burn wounds are P. aeruginosa, S. aureus, E. coli, Enterococcus spp., Enterobacter spp., Bacillus spp., Salmonella spp., Acinetobacter spp., Candida spp. and Aspergillus spp.6,7 Many antimicrobial agents are designed to prevent infection, while others are designed to eradicate the pathogens that proliferate in burn wound and cause infection. However, some antimicrobial agents such as antiseptics, antibiotics, antimicrobial peptides, silver preparations and antimicrobial photodynamic therapy have possible toxicity towards skin and other human cells.8

Although topical and parenteral antimicrobial therapy is used for the treatment of burn injuries, but bacterial and fungal infection is a major problem. Topical antimicrobials decrease the overgrowth of pathogens but rarely inhibit colonization. The spectrum of infective agents in burn wounds changes with time to time and place to place.9 Different antibiotics such as Ciprofloxacin, Gentamicin, Amoxicillin, Tobramycin and Erythromycin have effective against different pathogens.10,11

Keeping in view the importance of burn wound infections in terms of morbidity, mortality and increasing trend of antibiotic resistance. The present study has been designed to isolate and characterize pathogens from burn wounds and determine antibiotic susceptibility testing against these isolates using disc diffusion method. The present study aimed to characterize bacterial as well as fungal infections involved in burn wound infection from tertiary care hospitals and antibiotic susceptibility pattern against commonly used antibiotics.

Samples were inoculated on Nutrient agar and incubated at 37oC for 24 hours. Brain Heart Infusion broth and Blood agar were used as enrichment media while Mannitol Salt agar, Pseudomonas agar, MacConkey’s agar, Salmonella-Shigella agar and Sabouraud Dextrose agar (Oxoid, Basingstoke, UK) were used as selective media for the isolation of bacterial and fungal pathogens respectively according to the manufacture’s recommendations.9,12

Disc diffusion test was performed for estimation of antimicrobial susceptibility profiling of the isolates. Briefly, the inoculum suspension of each bacterial and fungal species was spread on Mueller-Hinton agar (MHA, Liofilchem, Italy). Commonly used antibiotics discs from different groups including Gentamicin (10 µg) and Amikacin (30 µg) from aminoglycoside, Chloramphenicol (30 µg) from amphenicol, Cefotaxime (30 µg) from Cephalosporin, Ciprofloxacin (05 µg) from fluoroquinolone, Imipenem (10 µg) from Carbapenem and Amphotericin-B (30 µg) from antifungal group were placed on Mueller-Hinton agar using sterile forceps. Bacterial plates were incubated at 37oC for 24 hours and fungal plates at 25oC for 48 hours in incubator (Binder, Germany). CLSI recommendations were followed for the estimation of antibacterial and antifungal activity.

Descriptive statistics was used to represent the zones of inhibition of antibiotics against different isolates. Data was analysed using one-way analysis of variance (ANOVA). The level of significance was set at (p<0.05). All analysis was done by using Minitab® version 15.15 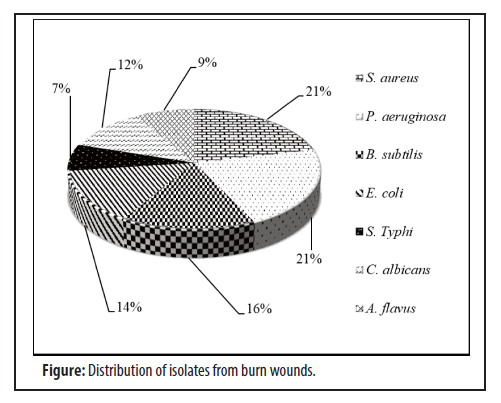 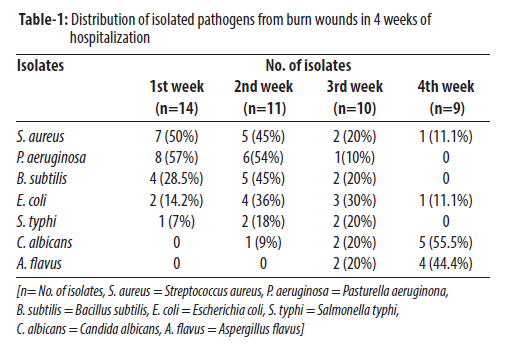 The aim of the current study was to characterize bacterial as well as fungal infections involved in burn wound infection from tertiary care hospitals and antibiotic susceptibility pattern for commonly used antibiotics. In the current study, we have recorded that 91% burn wound patients were positive for infection, same sort of findings have been reported in another similar study, where 96% swabs were found positive for bacterial pathogens collected from burn wounds.16 The prevalence of infection followed a temporal pattern. The highest percentage of samples positive for infection in burn patients was observed in third and fourth week (100%) followed by second (91.6%) and first (78.5%) week of hospitalization. A similar pattern is also reported in another study, 80% infections were due to bacteria and 20% due to fungus reported similar pattern of infection in burn wounds.17,18

Not only prevalence, but the type of infection was also time dependent. Time-related changes were observed in bacterial isolates during four weeks of hospitalization and monitoring. In the first week of burn injury, Gram-positive bacteria were frequently isolated. Immediately following thermal injury, burn wound surfaces are sterile, but become colonized with microorganisms eventually.19,20 Gram-positive bacteria like staphylococci that can tolerate the thermal insult are located in the depth of sweat gland and hair follicle and heavily colonize burn wound surface within 48 hours of burn injury, unless topical antimicrobial agents are used. In the second week, more Gram-negative bacteria were found. Endogenous Gram-negative bacteria usually colonize burn wounds from the host respiratory and gastrointestinal tract flora in average 5-7 days. Other bacteria might be transferred from hospital environment or hands of the practitioners.19,21 Fungal infections were observed in patients that have second, third and fourth week of hospitalization after burn. Fungal infections increased as time passes. Due to the use of broad-spectrum antibiotics both topically and systemically, fungal infections mostly occur after the second week of burn injury and become resistant.22,23

One of the major problems is the incidence of multi-drug resistant pathogens due to aberrant use of antibiotics. Thus, pathogens were isolated from burn wounds and antibiotic susceptibility was determined by using disc diffusion method.

In a current study, S. typhi was found the most sensitive organism. The sensitivity of S. typhi towards Ciprofloxacin, Gentamicin and Chloramphenicol was 100%, 97.9% and 93.6%, respectively.9 The very low resistance of Ciprofloxacin (16.66%) against S. typhi has also been reported.11 Both fungal isolates (C. albicans and A. flavus) were found sensitive to Amphotericin-B in our setup that matches with already published findings.25

On the basis of findings of the present study, it was concluded that S. aureus and P. aeruginosa are the most frequently isolated pathogens followed by B. subtilis, E. coli, C. albicans, A. flavus and S. typhi from burn wound hospitalized pateints. Antimicrobial resistance is a continually growing problem all over the world. S. aureus and P. aeruginosa were the most resistant pathogens whereas S. typhi, C. albicans and A. flavus were the susceptible pathogens. It revealed that Cefotaxime was the least effective antibiotic, while Gentamicin and Amphotericin-B were the most effective antimicrobial drugs against bacterial and fungal pathogens, respectively. The usage of antimicrobial drugs must be monitored and restricted in order to decrease the resistance. This study also concluded that antibiotic sensitivity testing before start of medication and constant surveillance are essential to prevent treatment failures and for patient care to reduce both morbidity as well as mortality.

Comparison of the performance of Tubex® TF, widal immunodiagnostic assay and blood culture in diagnosis of enteric fever in a private tertiary care hospital Peshawar, Pakistan